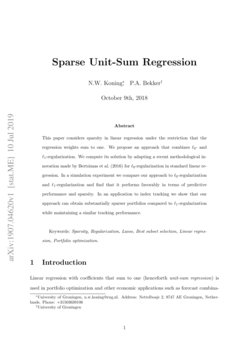 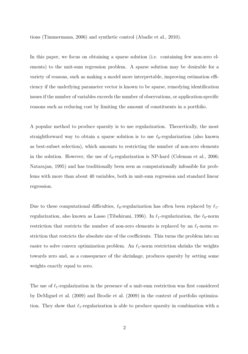 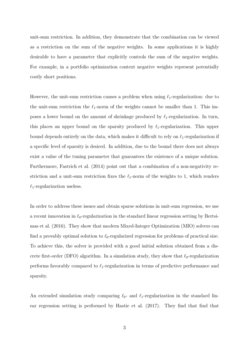 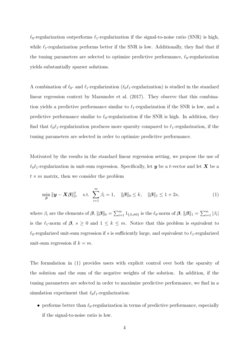 Linear regression with coefficients that sum to one (henceforth unit-sum regression) is used in portfolio optimization and other economic applications such as forecast combinations (Timmermann, 2006) and synthetic control (Abadie et al., 2010).

In this paper, we focus on obtaining a sparse solution (i.e. containing few non-zero elements) to the unit-sum regression problem. A sparse solution may be desirable for a variety of reasons, such as making a model more interpretable, improving estimation efficiency if the underlying parameter vector is known to be sparse, remedying identification issues if the number of variables exceeds the number of observations, or application-specific reasons such as reducing cost by limiting the amount of constituents in a portfolio.

A popular method to produce sparsity is to use regularization. Theoretically, the most straightforward way to obtain a sparse solution is to use ℓ0-regularization (also known as best-subset selection), which amounts to restricting the number of non-zero elements in the solution. However, the use of ℓ0-regularization is NP-hard (Coleman et al., 2006; Natarajan, 1995) and has traditionally been seen as computationally infeasible for problems with more than about 40 variables, both in unit-sum regression and standard linear regression.

The use of ℓ1-regularization in the presence of a unit-sum restriction was first considered by DeMiguel et al. (2009) and Brodie et al. (2009) in the context of portfolio optimization. They show that ℓ1-regularization is able to produce sparsity in combination with a unit-sum restriction. In addition, they demonstrate that the combination can be viewed as a restriction on the sum of the negative weights. In some applications it is highly desirable to have a parameter that explicitly controls the sum of the negative weights. For example, in a portfolio optimization context negative weights represent potentially costly short positions.

In order to address these issues and obtain sparse solutions in unit-sum regression, we use a recent innovation in ℓ0-regularization in the standard linear regression setting by Bertsimas et al. (2016). They show that modern Mixed-Integer Optimization (MIO) solvers can find a provably optimal solution to ℓ0-regularized regression for problems of practical size. To achieve this, the solver is provided with a good initial solution obtained from a discrete first-order (DFO) algorithm. In a simulation study, they show that ℓ0-regularization performs favorably compared to ℓ1-regularization in terms of predictive performance and sparsity.

Motivated by the results in the standard linear regression setting, we propose the use of ℓ0ℓ1-regularization in unit-sum regression. Specifically, let y be a t-vector and let X be a t×m matrix, then we consider the problem

The formulation in (1) provides users with explicit control over both the sparsity of the solution and the sum of the negative weights of the solution. In addition, if the tuning parameters are selected in order to maximize predictive performance, we find in a simulation experiment that ℓ0ℓ1-regularization:

The main contributions of this paper can be summarized as follows. [1] We propose ℓ0ℓ1-regularization for the unit-sum regression problem. [2] We analyze the problem for orthogonal design matrices and provide an algorithm to compute its solution. [3] We show how the algorithm for the orthogonal design case can be used in finding a solution to the general problem by extending the framework of Bertsimas et al. (2016) to unit-sum regression. [4] We perform a simulation experiment which shows that our approach performs favorably compared to ℓ0-regularization or ℓ1-regularization. [5] We demonstrate in an application to stock index tracking that a ℓ0ℓ1-regularization is able to find substantially sparser portfolios than ℓ1-regularization, while maintaining a similar out-of-sample tracking error.

As problem (1) is difficult to study in its full generality, we first consider the special case that X is orthogonal. We derive properties of a solution to (1) under orthogonality and use these properties in order to construct an algorithm that finds a solution. The algorithm is presented at the end of the section. In Section 4 this algorithm is used in finding a solution to the general problem by extending the framework of Bertsimas et al. (2016). In Section 3 we analyze the sparsity of the solution under orthogonality.

Assume that X′X=XX′=Im, where Im is the m×midentity matrix. Let us write η=X′y, so that minimizing ∥y−Xβ∥22 in β is equivalent to minimizing ∥X′y−β∥22=∥η−β∥22=:Q(β). Define

We assume the elements of η are different and k<m. Without further loss of generality we assume η1>η2>…>ηm. In Section 2.4 we relax the assumption that k<m and allow for k≤m.

where 0⩽z, so that T=∪0⩽z⩽sAz. If ˆβ∈argminβ∈TQ(β), then ˆβ∈Az for some z⩽s. Let us denote this value of z with ^z. We will now show that ˆβ can be computed from the signs of its elements and ^z. In order to show this, we first solve a related problem and then show that ˆβ is equal to the solution of a specific case of this related problem.

Let P⊆M and N⊂M be disjoint sets with cardinalities p and n, respectively, where M:={1,…,m}. Define

Minimization of Q(β) over the affinely restricted set B(P,N,z) has the solution

Recall that ˆβ∈argminβ∈TQ(β) and let ˆP:={i | ˆβi>0} and ˆN:={i | ˆβi<0}. Furthermore, let C be the set of vectors β with elements that have the same signs as the elements of ˆβ, then A^z∩C⊆B(ˆP,ˆN,^z). Notice that the difference between A^z∩C and B(ˆP,ˆN,^z) is that there are no sign restrictions on elements βi∈B(ˆP,ˆN,^z), for which i∈(P∪N). Consequently,

So, the problem can be decomposed into finding the components of the triplet (P,N,z) that minimizes Q(β(P,N,z)). Next, we will study the properties of these components.

The sorting of η reveals an ordered structure in the sets P and N that minimize Q(β(P,N,z)). This structure is described in the following result.

The proof is given in the Appendix.

We will now consider the relationship between z and the pair (p,n). With reference to (3), let us consider the sets

We will now analyze how Q(β(pz,nz,z)) varies with z if pz+nz≤k, and use this to find a minimizer ˆβ∈argminβ∈TQ(β) if ps+ns≤k. The case that ps+ns>k is treated separately in Section 2.3.

As pz and nz are integers, they increase discontinuously as z increases. In this subsection we show that Q(β(pz,nz,z)) and its derivative are continuous in z despite these discontinuities in pz and nz. This will allow us to show that if ps+ns≤k.

is a continuous function of z for 0⩽z⩽zm, with derivative

We summarize these results in a proposition.

The function Q(β(pz,nz,z)) is continuous in z for 0≤z≤zm, and the derivative with respect to z is negative for 0<z<zm.

If ps+ns>k, then β(ps,ns,s)∉T. So an alternative approach is required. By Lemma 1 and the fact that ps+ns>k, we should compare the objective values for all pairs (p,n) for which p+n=k, p⩽ps and n⩽ns. In order to do so for a given pair (p,n), we need to find the value of z that minimizes Q(β(p,n,z)). This minimizing value, which we will denote by ~z, must satisfy z∗pn:=max{z+p,z−m−n+1}<~z⩽s. We will now show that ~z is either equal to s or to spn:=argminzQ(β(p,n,z)).

Hence, if ps+ns>k, we can compute ~z for each pair (p,n) that satisfies p+n=k, p⩽ps and n⩽ns and use this to compute the objective value Q(β(p,n,~z)). By comparing the objective values, we can find the triplet (p,n,~z) for which .

Combining these findings with the findings from the previous sections, we can construct an algorithm to find an element of argminβ∈TQ(β). This algorithm is presented in Algorithm 1.

The case k⩽m can be treated in a way similar to the case k<m, except that in the proof of Proposition 2 the assumption k<m was needed. We therefore provide a proof for k=m.

The proof is given in the Appendix.

In this section, we use the results from Section 2 to study the sparsity of the solution to (1) under orthogonality.

As both ℓ0- and ℓ1-regularization produce sparsity, we can analyze how the sparsity of the solution to (1) depends on the tuning parameters k and s. From Algorithm 1, it is straightforward to observe that the amount of non-zero elements in ˆβ is equal to min(k,¯p+¯n), where ¯p=argmaxi(i | ∑i−1j=1(ηj−ηi)<1+s) and ¯n=argmaxi(i | ∑i−1j=1(ηm−i+1−ηm−j+1)<s). So the ℓ1-regularization component only produces additional sparsity if k>¯p+¯n.

where Δj=ηj−ηj+1. This shows that the maximum sparsity produced by ℓ1-regularization depends entirely on the size of the gaps between the ¯p+1 largest elements of η. So the maximum amount of sparsity does not change if the same constant is added to each element of η.

To further analyze the maximum sparsity produced by the ℓ1-regularization component, we consider two special cases of η: one case without noise and one case with noise.

Linear and Noiseless. Suppose that the ¯p+1 largest elements of η are linearly spaced with distance Δ>0 (i.e. ηi=a−(i−1)Δ for some a). Then, using (11), we can derive the following closed-form expression for the minimum number of non-zero elements:

where ⌊⋅⌋ rounds down to the nearest integer. As this function is weakly decreasing in Δ, the maximum sparsity is increasing in Δ. So, we obtain the intuition that if the largest elements of η are more similar, then less sparsity can be produced by ℓ1-regularization.

In this section, we describe how a solution can be found for the general case, in which X is not required to be orthogonal. To do so, we adapt the framework laid out by Bertsimas et al. (2016) for standard linear regression. This framework consists of two components. The first component is a Discrete First-Order (DFO) algorithm that uses an algorithm for the orthogonal problem as a subroutine in each iteration. The solution to this DFO algorithm is then used as an initial solution for the second component. The second component relies on reformulating (1) as an MIO problem, which can be solved to provable optimality by using an MIO solver.

In the construction of the DFO algorithm, we closely follow Bertsimas et al. (2016), but use a different constraint set that includes an additional ℓ1-norm restriction and unit-sum restriction.

Denote the objective function as

This function is Lipschitz continuously differentiable, as

is the largest absolute eigenvalue of

X′X. So, we can apply the following result.

For a convex Lipschitz continuous function f(⋅), we have

Notice that (13) can be computed using Algorithm 1. Therefore, it is possible to use iterative updates in order to decrease the objective value. Specifically, let β1∈T and recursively define βr+1=argminη∈TQL∗(η,βr), for all r∈N. Then by Proposition 6,

In Algorithm 2, we present an algorithm that uses this updating step until some convergence criterion is reached.

In this section, an MIO formulation for problem (1) is presented. In order to formulate problem (1) as an MIO problem, we use three sets of auxiliary variables. The variables β+i and β−i are used to specify the positive and negative parts of the arguments βi, <span aria-lab