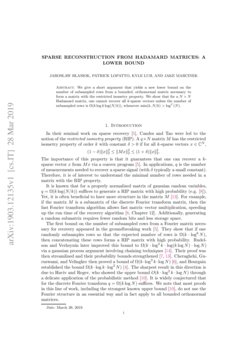 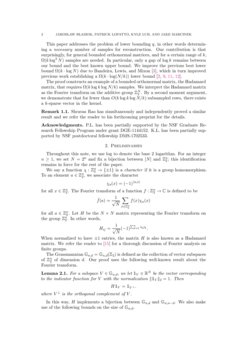 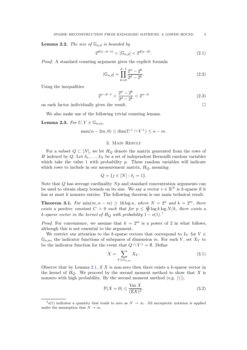 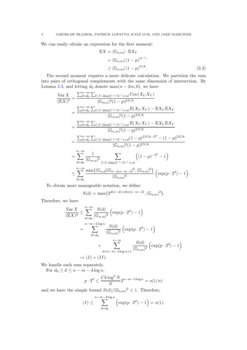 We give a short argument that yields a new lower bound on the number of ...
Jarosław Błasiok, et al. ∙

The Barankin bound is generalized to the vector case in the mean square ...
Bruno Cernuschi-Frias, et al. ∙

A Lower Bound on Cycle-Finding in Sparse Digraphs

We consider the problem of finding a cycle in a sparse directed graph G ...
Xi Chen, et al. ∙

We give a short proof of a bound on the list chromatic number of graphs ...
François Pirot, et al. ∙

The significance of this property is that it guarantees that one can recover an approximately K-sparse vector x∗ from Mx∗ via a convex program [5]. Specifically, they showed that if a matrix M satisfies (2K,√2−1)-RIP, then the minimizer

where x∗K is the best K-sparse approximation of x∗ — in particular when x∗ is exactly K-sparse, it can be efficiently recovered from Mx∗ without any error.

In applications, q is the number of measurements needed to recover a sparse signal. Therefore, it is of interest to understand the minimal number of rows needed in a matrix with the RIP property.

It is known that for a properly normalized matrix with independent gaussian entries, q=O(Klog(N/K))

suffices to generate a RIP matrix with high probability (e.g.

[8]). Yet, it is often beneficial to have more structure in the matrix M [13]. For example, if the matrix M

The first bound on the number of subsampled rows from a Fourier matrix necessary for recovery appeared in the groundbreaking work [5]. They showed that if one randomly subsamples rows so that the expected number of rows is O(K⋅log6N), then concatenating these rows forms a RIP matrix with high probability, after appropriate normalization. Rudelson and Verhsynin later improved this bound to O(K⋅log2K⋅log(KlogN)⋅logN) via a gaussian process argument involving chaining techniques [14]. Their proof was then streamlined and their probability bounds strengthened [7, 13]. Cheraghchi, Guruswami, and Velingker then proved a bound of O(K⋅log3K⋅logN) [6], and Bourgain established the bound O(K⋅logK⋅log2N) [4]. The sharpest result in this direction is due to Haviv and Regev, who showed the upper bound O(K⋅log2K⋅logN) through a delicate application of the probabilistic method [10]. It is widely conjectured that for the discrete Fourier transform q=O(KlogN) suffices [14].

It turns out that all proofs in this line of work, including the strongest known upper bound [10]

, apply in a more general setting where random matrix

M is constructed by subsampling rows of any bounded orthonormal matrix — that is an orthonormal matrix with all entries bounded in magnitude by B√N for some constant B. The matrix of the Discrete Fourier Transform satisfy this property with B=1.

This paper addresses the problem of determining a necessary number of samples for reconstruction. Our contribution is that — surprisingly — for general bounded orthonormal matrices, and for a certain range of K, Ω(Klog2N) samples are needed. In particular, only a gap of logK remains between our bound and the best known upper bound. We improve the previous best lower bound Ω(K⋅logN) due to Bandeira, Lewis, and Mixon [3] which applied to the DFT matrix. Those in turn improve upon more general lower bounds Ω(K⋅log(N/K)) on the number of rows for any matrix that satisfies the RIP property [2, 9, 11, 12].

In the proof we consider an example of a bounded orthonormal matrix, the Hadamard matrix (i.e. the matrix of the Fourier transform on the additive group Zn2), and we show that for this specific matrix at least Ω(KlogKlogN/K)

samples is required. More concretely, by a second moment argument, we demonstrate that for fewer than

O(KlogKlogN/K) subsampled rows, with high probability there exists a K-sparse vector in the kernel — ruling out both the RIP property, and in general any hope for sparse recovery algorithm with those matrices. The same proof can be applied more generally to show that for any prime r one needs to subsample at least Ω(KlogKlog(N/K)/log(r)) rows of a matrix corresponding to Fourier transform on the additive group Znr — for the sake of simplicity of the argument we do not elaborate on this.

Throughout this note, we use log to denote the base 2 logarithm. For an integer n≥1, we set N=2n and fix a bijection between [N] and Zn2; this identification remains in force for the rest of the paper.

We say a function χ:Zn2→{±1} is a character if it is a group homomorphism. To an element a∈Zn2, we associate the character

for all x∈Zn2. The Fourier transform of a function f:Zn2→C is defined to be

for all a∈Zn2. Let H be the N×N matrix representing the Fourier transform on the group Zn2. In other words,

When normalized to have ±1 entries, the matrix H is also known as a Hadamard matrix. We refer the reader to [15] for a thorough discussion of Fourier analysis on finite groups.

The Grassmannian Gn,d=Gn,d(Z2) is defined as the collection of vector subspaces of Zn2 of dimension d. Our proof uses the following well-known result about the Fourier transform.

For a subspace V∈Gn,d, we let 1V∈RN be the vector corresponding to the indicator function for V with the normalization ∥1V∥2=1. Then

where V⊥ is the orthogonal complement of V.

In this way, H implements a bijection between Gn,d and Gn,n−d. We also make use of the following bounds on the size of Gn,d.

The size of Gn,d is bounded by

on each factor individually gives the result. ∎

We also make use of the following trivial counting lemma.

For a subset Q⊂[N], we let HQ denote the matrix generated from the rows of H indexed by Q. Let δ1,…,δN

1 with probability ^p. Random variables δi will indicate which rows to include in our measurement matrix, HQ, meaning

Note that Q has average cardinality N^p and standard concentration arguments can be used to obtain sharp bounds on its size. We say that a vector v∈RN is K-sparse if it has at most K nonzero entries. The following theorem is our main technical result.

For min(k,n−k)≥12logn, where N=2n and K=2k, there exists a positive constant c>0 such that for ^p≤cKNlogKlog(N/K), there exists a K-sparse vector in the kernel of HQ with probability 1−o(1).111o(1) indicates a quantity that tends to zero as N→∞. All asymptotic notation is applied under the assumption that N→∞.

We can easily obtain an expression for the first moment:

The second moment requires a more delicate calculation. We partition the sum into pairs of orthogonal complements with the same dimension of intersection. By Lemma 2.3, and letting d0 denote max(n−2m,0), we have

We can explicitly compute each term in the sum above as follows.

We plug this expression back to the sum (3.3), in order to arrive at

Let us use T(n,k,d) to denote number of pairs U,V∈Gn,k such that dim(U⊥∩V⊥)=d. With this notation, the entire sum simplifies to

The first part of the summation is easy to control: for d<n−k−3logn we have p2d≤2cn, which implies exp(p2d)−1≤4cn, and

We can now turn our attention to bounding (II).

The quadratic in the exponent is maximized for d=n−2k−12, hence in the range d≥n−k−3logn, the maximum is attained exactly at d=n−k−3logn. This yields

where the second inequality follows from the fact that min(k,n−k)≥12logn.

On the other hand, using Lemma 2.2 again, we have 1|Gn,k|2≤2−2k(n−k) and the statement of the claim follows by combining these two inequalities. ∎

We can now state our main result in terms of sparse recovery.

By Theorem 3.1, there exists a 2K-sparse vector x in the kernel of HQ with high probability if the expected number of rows of HQ is o(KlogKlog(N/K)). Let us write x=y−z where y and z are both K-sparse vectors. Then HQy=HQz, which proves that HQ is not injective when restricted to the set of all K-sparse vectors. The statement about the RIP property follows directly from the definition. ∎