Sparse linear regression, which entails finding a sparse solution to an underdetermined system of linear equations, can formally be expressed as an l_0-constrained least-squares problem. The Orthogonal Least-Squares (OLS) algorithm sequentially selects the features (i.e., columns of the coefficient matrix) to greedily find an approximate sparse solution. In this paper, a generalization of Orthogonal Least-Squares which relies on a recursive relation between the components of the optimal solution to select L features at each step and solve the resulting overdetermined system of equations is proposed. Simulation results demonstrate that the generalized OLS algorithm is computationally efficient and achieves performance superior to that of existing greedy algorithms broadly used in the literature. 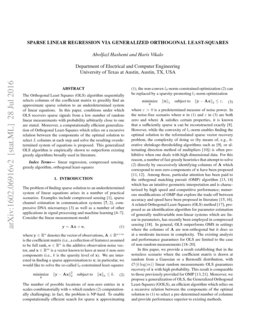 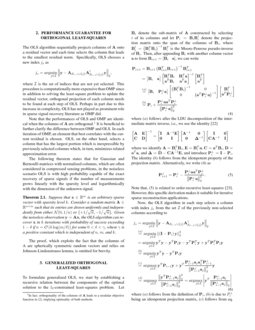 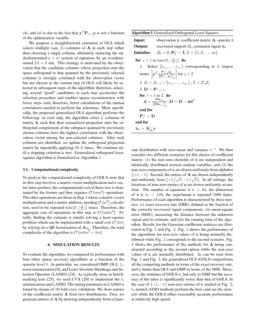 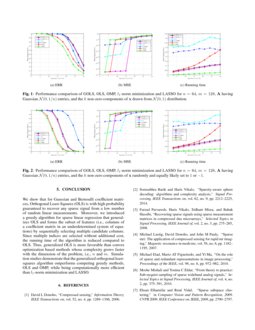 Semi-Infinite Linear Regression and Its Applications

The problem of finding sparse solution to an underdetermined system of linear equations arises in a number of practical scenarios. Examples include compressed sensing [1]

denotes the vector of observations,

A∈Rn×m is the coefficient matrix (i.e., a collection of features) assumed to be full rank, e∈Rn is the additive observation noise vector, and x∈Rm is a vector known to have at most k non-zero components (i.e., k is the sparsity level of x). We are interested in finding a sparse approximation to x; in particular, we would like to solve the so-called l0-constrained least-squares

The number of possible locations of non-zero entries in x scales combinatorially with n which renders (2) computationally challenging; in fact, the problem is NP-hard. To enable computationally efficient search for sparse x approximating (1), the non-convex l0-norm-constrained optimization (2) can be replaced by a sparsity-promoting l1-norm optimization

where ε>0 is a predetermined measure of noise power. In the noise-free scenario where e in (1) and ε in (3) are both zero and where A satisfies certain properties, it is known that a sufficiently sparse x can be reconstructed exactly [8]. However, while the convexity of l1-norm enables finding the optimal solution to the reformulated sparse vector recovery problem, the complexity of doing so (by means of, e.g., iterative shrinkage-thresholding algorithms such as [9], or alternating direction method of multipliers [10]

) is often prohibitive when one deals with high dimensional data. For this reason, a number of fast greedy heuristics that attempt to solve (

2) directly by successively identifying columns of A which correspond to non-zero components of x have been proposed [11, 12]. Among those, particular attention has been paid to the orthogonal matching pursuit (OMP) algorithm [13, 14] which has an intuitive geometric interpretation and is characterized by high speed and competitive performance; numerous modifications of OMP that explore the trade-off between accuracy and speed have been proposed in literature [15, 16]. A related Orthogonal Least-Squares (OLS) method [17], proposed as an identification algorithm for parameter estimation of generally multivariable non-linear systems which are linear in parameters, has recently been employed in compressed sensing [18]. In general, OLS outperforms OMS in settings where the columns of A are non-orthogonal but it does so at a moderate increase in complexity. The existing analysis and performance guarantees for OLS are limited to the case of non-random measurements [18, 19, 20].

In this paper, we provide a result establishing that in the noiseless scenario where the coefficient matrix is drawn at random from a Gaussian or a Bernoulli distribution, with

O(klog(m)) linear random measurements OLS guarantees recovery of x with high probability. This result is comparable to those previously provided for OMP [13, 21]. Moreover, we propose a generalization of OLS, the Generalized Orthogonal Least-Squares (GOLS), an efficient algorithm which relies on a recursive relation between the components of the optimal solution to (1) to select a pre-determined number of columns and provide performance superior to existing methods.

The OLS algorithm sequentially projects columns of A onto a residual vector and each time selects the column that leads to the smallest residual norm. Specifically, OLS chooses a new index js as

where I is the set of indices that are not yet selected. This procedure is computationally more expensive than OMP since in addition to solving the least-square problem to update the residual vector, orthogonal projection of each column needs to be found at each step of OLS. Perhaps in part due to this increase in complexity, OLS has not played as prominent role in sparse signal recovery literature as OMP did.

Note that the performances of OLS and OMP are identical when the columns of A are orthogonal.111In fact, orthogonality of the columns of A leads to a modular objective function in (2), implying optimality of both methods. It is beneficial to further clarify the difference between OMP and OLS. In each iteration of OMP, an element that best correlates with the current residual is chosen. OLS, on the other hand, selects a column that has the largest portion which is inexpressible by previously selected columns which, in turn, minimizes related approximation error.

The following theorem states that for Gaussian and Bernoulli matrices with normalized columns, which are often considered in compressed sensing problems, in the noiseless scenario OLS is with high probability capable of the exact recovery of sparse signals if the number of measurements grows linearly with the sparsity level and logarithmically with the dimension of the unknown signal.

A∈Rn×m such that its entries are drawn uniformly and independently from either N(0,1/n) or {+1/√n,−1/√n}. Given the noiseless observation y=Ax, the OLS algorithm can recover x in k iterations with probability of success exceeding 1−δ if n=O(klog(m/δ)) for some 0<δ<γ, where γ is a positive constant which is independent of n, m, and k.

The proof, which exploits the fact that the columns of A are spherically symmetric random vectors and relies on Johnson-Lindenstrauss lemma, is omitted for brevity.

To formulate generalized OLS, we start by establishing a recursive relation between the components of the optimal solution to the l0-constrained least-squares problem. Let Bi denote the sub-matrix of A constructed by selecting i of its columns and let Pi=BiB†i denote the projection matrix onto the span of the columns of Bi, where B†i=(BTiBi)−1BTi is the Moore-Penrose pseudo-inverse of Bi. Then, after appending Bi with another column vector a to form Bi+1=[Bia], we can write

where (a) follows after the LDU decomposition of the intermediate matrix inverse, i.e., we use the identity [22]

Note that, (5) is related to order-recursive least-squares [23]. However, this specific derivation makes it suitable for iterative sparse reconstruction applications.

Now, the OLS algorithm in each step selects a column with index js from the set I of the previously non-selected columns according to

where (a) follows from the definition of Pi, (b) is due to P⊥i being an idempotent projection matrix, (c) follows from eq. (4), and (d) is due to the fact that yTPi−1y is not a function of the optimization variable.

We propose a straightforward extension of OLS which selects multiple (say, L) columns of A in each step rather than choosing a single column, ultimately replacing the underdetermined n×m system of equations by an overdetermined Lk×k one. This strategy is motivated by the observation that the candidate columns whose projection onto the space orthogonal to that spanned by the previously selected columns is strongly correlated with the observation vector but not chosen in the current step of OLS will likely be selected in subsequent steps of the algorithm; therefore, selecting several “good” candidates in each step accelerates the selection procedure and enables sparse reconstruction with fewer steps (and, therefore, fewer calculations of the mutual correlations needed to perform the selection). More specifically, the proposed generalized OLS algorithm performs the following: in each step, the algorithm select L columns of matrix A such that their normalized projection onto the orthogonal complement of the subspace spanned by previously chosen columns have the highest correlation with the observation vector among the non-selected columns. After such columns are identified, we update the orthogonal projection matrix by repeatedly applying (5) L times. We continue until a stopping criterion is met. Generalized orthogonal least-squares algorithm is formalized as Algorithm 1.

To analyze the computational complexity of GOLS, note that its first step involves a matrix-vector multiplication and a vector inner product; the computational cost of these two is dominated by the former and thus requires O(mn2) operations. The other operations are those in Step 3 where a matrix-vector multiplication and a matrix addition, needing O(n2) calculation, need to be repeated min{k,⌊nL⌋} times. Therefore, the aggregate cost of operations in this step is O(mkn2). Finally, finding the estimate ^x entails solving a least-squares problem which can be implemented with a small cost O(kn) by relying on a QR factorization of ASk. Therefore, the total complexity of the algorithm is O(mkn2+kn).

To evaluate the algorithm, we compared its performance with four other sparse recovery algorithms as a function of the sparsity level k. In particular, we considered OMP, OLS, l1-norm minimization [8], and Least Absolute Shrinkage and Selection Operator (LASSO) [24]. As typically done in benchmarking tests [25], we used CVX [26] to implement the l1 minimization and LASSO. The tuning parameter in LASSO is found by means of 10-fold cross validation. We draw entries of the coefficient matrix A from two distributions. First, we generate entries of A

n−1. We then consider two different scenarios for this choice of coefficient matrix: (1) the non-zero elements of x

are independent and identically distributed normal random variables, and (2) the non-zero components of

x are drawn uniformly from alphabet {+1,−1}. Second, the entries of A are drawn independently and uniformly from {+1/√n,−1/√n}. In all settings, the locations of non-zero entries of x are drawn uniformly at random. The number of equations is n=64, the dimension of x is m=128; the experiment is repeated 1000 times. Performance of each algorithm is characterized by three metrics: (i) exact recovery rate (ERR), defined as the fraction of the correctly recovered signal components, (ii) mean-square error (MSE), measuring the distance between the unknown signal and its estimate, and (iii) the running time of the algorithm. Results for the Gaussian coefficient matrices are illustrated in Fig. 1 and Fig. 2. Fig. 1 shows the performance of the algorithms for non-zero values of x

being normally distributed while Fig. 2 corresponds to the second scenario. Fig. 3 shows the performance of the methods for

A being constructed according to the second option while the non-zero values of x are normally distributed. As can be seen from Fig. 1 and Fig. 3, the generalized OLS (GOLS) outperforms all the competing methods in terms of the exact recovery rate, and is better than OLS and OMP in terms of the MSE. Moreover, the runtimes of GOLS is 2nd only to OMP but the accuracy of the latter is significantly worse than that of GOLS. In the case of {+1,−1} non-zero entries of x studied in Fig. 2, l1-norm/LASSO methods perform the best (and are the slowest) while the GOLS offers reasonably accurate performance at relatively high speed.

We show that for Gaussian and Bernoulli coefficient matrices, Orthogonal Least-Squares (OLS) is with high probability guaranteed to recover any sparse signal from a low number of random linear measurements. Moreover, we introduced a greedy algorithm for sparse linear regression that generalizes OLS and forms the subset of features (i.e., columns of a coefficient matrix in an underdetermined system of equations) by sequentially selecting multiple candidate columns. Since multiple indices are selected without additional cost, the running time of the algorithm is reduced compared to OLS. Thus, generalized OLS is more favorable than convex optimization based methods whose complexity grows faster with the dimension of the problem, i.e., n and m. Simulation studies demonstrate that the generalized orthogonal least-squares algorithm outperforms competing greedy methods, OLS and OMP, while being computationally more efficient than l1-norm minimization and LASSO.