This paper aims at achieving a simultaneously sparse and low-rank estimator from the semidefinite population covariance matrices. We first benefit from a convex optimization which develops l_1-norm penalty to encourage the sparsity and nuclear norm to favor the low-rank property. For the proposed estimator, we then prove that with large probability, the Frobenious norm of the estimation rate can be of order O(√(s(r)/n)) under a mild case, where s and r denote the number of sparse entries and the rank of the population covariance respectively, n notes the sample capacity. Finally an efficient alternating direction method of multipliers with global convergence is proposed to tackle this problem, and meantime merits of the approach are also illustrated by practicing numerical simulations. 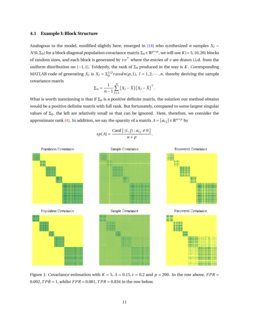 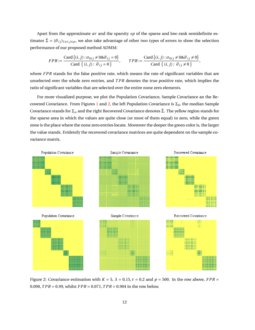 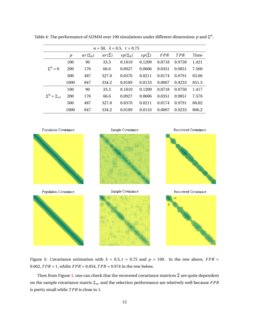 For the general problem of minimizing a convex function over a compact c...
Martin Jaggi, et al. ∙

Estimation of population covariance matrices from samples of multivariate data has draw many attentions in the last decade owing to its fundamental importance in multivariate analysis. With dramatic advances in technology in recent years, various research fields, such as genetic data, brain imaging, spectroscopic imaging, climate data and so on, have been used to deal with massive high-dimensional data sets, whose sample sizes can be very small relative to dimension. In such settings, the standard and the most usual sample covariance matrices often performs poorly

Moreover, there are many cases where the model is known to be structured in several ways at the same time. In recent years, one of research contents is to estimate a covariance matrix possessing both sparsity and positive definiteness. For instance, Rothman [15] gave the following model:

where Σn is the sample covariance matrix, ∥⋅∥F is the Frobenious norm, ∥⋅∥1 is the element-wise ℓ1-norm and Σ−:=Σ−\textmdDiag(Σ). From the optimization viewpoint, (1) is similar to the graphical lasso criterion [9] which also has a log-determinant part and the element-wise ℓ1-penalty. Rothman [15] derived an iterative procedure to solve (1). While Xue, Ma and Zou [18] omitted the log-determinant part and considered the positive definite constraint {Σ⪰ε\emph{I}} for some arbitrarily small ε>0:

They utilized an efficient alternating direction method (ADM) to solve the challenging problem (2) and established its convergence properties.

Most of the literatures, e.g.,[12, 15, 18], required the population covariance matrices being positive definite, and thus there is no essence of pursuing the low-rank of the estimator. By contrast, newly appeared research topic is to consider simultaneously the sparsity and low-rank of a structured model, which implies that the population covariance matrices are no longer restricted to the positive definite matrix cone and can be relaxed to the positive semidefinite cone. In addition, the models with structure of being simultaneously the sparsity and low-rank are widely applied into practice, such as sparse signal recovery from quadratic measurements and sparse phase retrieval, see [13] for example. Moreover, Richard et al. [14]

With stimulations of those ideas, we construct the following convex model encompassing the ℓ1-norm and nuclear norm for estimating the covariance matrix:

being the eigenvalue of

Σ, is the trace norm when Σ⪰0 and ensures low-rank solutions of (3). Here we inroduce the approximate rank to interpret the low-rank, which is defined as ar(A):=ar∈{1,2,⋯,p} being the smallest number such that

are the singular value of

The contributions of this paper mainly center on two aspects. For one thing, being different from [13, 14], we establish the theoretical statistical theory under different assumptions rather than giving the generalized error bound of the estimation. Especially, we acquire the estimation rate O(√(slogr)/n) under the Frobenious norm error, which improves the optimal rate O(√(slogp)/n) where the low-rank property of the estimator does not be considered [7, 15, 18] and p is the samples’ dimension with p>max{n,r}. For another, we take advantage of the alternating direction method of multipliers (ADMM), also can be seen in [18, 19], to combat our problem (3).

The organization of this paper is as follows. In Section 2 we will present some theoretical properties of the estimator derived by the proposed model (3). After that the alternating direction method of multipliers (ADMM) is going to be introduced to combat the problem, and numerical experiments are projected to show the performance of this method in Sections 3 and 4 respectively. We make a conclusion in the last section.

2 A Sparse and Low-Rank Covariance Estimator

Before the main part, we hereafter introduce some notations. E(X) and P(A) denote the expectation of X and the probability of the incident A occurring respectively. \textmdCard(S) is the number of entries of the set S

For given observed independently and identically distributed (i.i.d. for short) p-variate random variables X1,⋯, Xn with covariance matrix Σ0 and p>n, the goal is to estimate the unknown matrix Σ0 based on the sample {Xl:l=1,⋯,n}. This problem is called covariance matrix estimation which is of fundamental importance in multivariate analysis.

where ¯X=1n∑nl=1Xl. Denote S the support set of the population covariance matrix Σ0 as

Assumption 2.1 is a common used condition in covariance matrix estimation, on which a useful lemma based is recalled here for the sequel analysis. One can also refer it in [1].

where constants C1,C2 and δ depend on ¯λ only.

Another lemma which plays an important role in our main results is stated below.

is the matrix composed of eigenvectors,

For convenience we denote ¯¯¯¯¯Δ=UΔU⊤. Then for I, it holds

From the H¨older Inequality, one can prove that

For III, combining with (8) we get that

Finally ∥^Δ∥F≤ε indicates that ∥^Σ−Σ0∥F≤ε due to ∥^Δ∥F=∥U^ΔU⊤∥F=∥^Σ−Σ0∥F. Hence the desired result is obtained.. □

Then in order to acquiring the rate of the estimation, the two following commonly used assumptions are needed to introduced, and also can be seen [1, 15]. Assumption 2.4 holds, for example, if Xl1,⋯,Xlp are Gaussian.

Built on the two assumptions, we give our main results with regard to rates of the estimator of (3).

where C3 and C4 are some constants. We then apply the bound slogr+(slogp)/Kδ1=o(n) and Lemma 2.3 with

Evidently, 1−C3p2−C4K2−δ1r−C4K21 can be arbitrarily close to one by choosing K1 sufficiently large.. □

Clearly, if the λmin(Σ0)>0 in Assumption 2.1, the better rate OP(√slogrn) would reduce to OP(√slogpn). It is worth mentioning that under the the Assumption 2.1, the minimax optimal rate of convergence under the Frobenius norm in Theorem 4 of [7] is OP(√slogpn) which also has been obtained by [18]. However, to attain the same rate in the presence of the log-determinant barrier term (1), Rothman [15] instead would require that λmin, the minimal eigenvalue of the true covariance matrix, should be bounded away from zero by some positive constant, and also that the barrier parameter should be bounded by some positive quantity. [18] illustrated this theory requiring a lower bound on λmin is not very appealing.

Proof  Since Assumptions 2.1 and 2.5 hold, one can modify a result of Bickel & Levina (2008a) and show that for ν>0 sufficiently small

Apparently, the bound 1−C6K−α2 can be arbitrarily close to one by taking K2 sufficiently large.. □

In this section, we will construct the alternating direction method of multipliers (ADMM) to solve problem (3). By introducing an auxiliary variable Γ, problem (3) can be rewritten as

The constraint Γ⪰0 can be put into the objective function by using an indicator function:

This leads to the following equivalent reformulation of (14):

Recently, the alternating direction method of multipliers (ADMM) has been studied extensively for solving (15). A typical iteration of ADMM for solving (15) can be described as

where the augmented Lagrangian function Lμ(Σ,Γ,Λ) is defined as

in which Λ is the Lagrange multiplier and μ>0 is a penalty parameter. Note that ADMM (16-18) can be written explicitly as

Therefore, combining with (22)-(24), the whole algorithm is written as follows

To end this section, we prove that the sequence (Γk,Σk,Λk) produced by the alternating direction method of multipliers (Table 1) converges to (^Γ,^Σ,^Λ), where (^Γ,^Σ) is an optimal solution of (15) and ^Λ is the optimal dual variable. Now we label some necessary notations for the ease of presentation. Let H be a 2p×2p matrix defined as

the weighted norm ∥⋅∥2H stands for ∥V∥2H:=⟨V,HV⟩ and the corresponding inner product ⟨⋅,⋅⟩H is ⟨U,V⟩H:=⟨U,HV⟩. Before presenting the main theorem with regard to the global convergence of ADMM, we introduce the following lemma.

Assume that (^Γ,^Σ) is an optimal solution of (???) and ^Λ is the corresponding optimal dual variable associated with the equality constraint Σ−Γ=0. Then the sequence {(Γk,Σk,Λk)} produced by ADMM satisfies

Based on the lemma above, the convergent theorem can be derived immediately.

The sequence {(Γk,Σk,Λk)} generated by Algorithm 1 from any starting point converges to an optimal solution of (???).

So similar to the method in [18], one can solve the soft-thresholding estimator

to initialize the Σ0. If the derived Σst⪰0 then the recovered sparse and low-rank semidefinite estimator ^Σ=Σst. In our stimulation, we uniformly initialize Λ0 as the matrix with all entries being 1, Σ0

as zero matrix and

Σst respectively. Unlike λ and τ, μ does not change the final covariance estimator, thus we fixed μ=1 just for simplicity and the stop criteria is set as

Analogous to the model, modified slightly here, emerged in [14] who synthesized n samples Xl∼N(0,Σ0) for a block diagonal population covariance matrix Σ0∈Rp×p, we will use K(=5,10,20) blocks of random sizes, and each block is generated by vv⊤ where the entries of v

are drawn i.i.d. from the uniform distribution on

[−1,1]. Evidently, the rank of Σ0 produced in the way is K. Corresponding MATLAB code of generating Xl is Xl=Σ1/20randn(p,1), l=1,2,⋯,n, thereby deriving the sample covariance matrix