In this paper, the beam squint problem, which causes significant variations in radiated beam gain over frequencies in millimeter wave communication system, is investigated. A constant modulus beamformer design, which is formulated to maximize the expected average beam gain within the bandwidth with limited variation over frequencies within the bandwidth, is proposed. A semidefinite relaxation (SDR) method is developed to solve the optimization problem under the constant modulus constraints. Depending on the eigenvalues of the optimal solution, either direct beamforming or transmit diversity based beamforming is employed for data transmissions. Through numerical results, the proposed transmission scheme can compensate for beam squint effectively and improve system throughput. Overall, a transmission scheme for beam squint compensation in wideband wireless communication systems is provided. 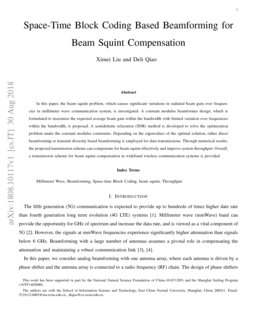 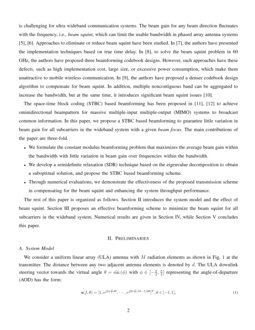 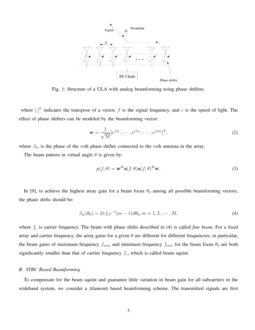 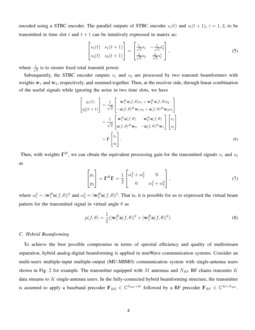 Terahertz (THz) communication is considered as an attractive way to over...
Boyu Ning, et al. ∙

Broadband beamforming is a technique to obtain the signal with a wide ra...
Phan Le Son, et al. ∙

The fifth generation (5G) communication is expected to provide up to hundreds of times higher date rate than fourth generation long term evolution (4G LTE) systems [1]. Millimeter wave (mmWave) band can provide the opportunity for GHz of spectrum and increase the data rate, and is viewed as a vital component of 5G [2]. However, the signals at mmWave frequencies experience significantly higher attenuation than signals below 6 GHz. Beamforming with a large number of antennas assumes a pivotal role in compensating the attenuation and maintaining a robust communication link [3], [4].

In this paper, we consider analog beamforming with one antenna array, where each antenna is driven by a phase shifter and the antenna array is connected to a radio frequency (RF) chain. The design of phase shifters is challenging for ultra wideband communication systems. The beam gain for any beam direction fluctuates with the frequency, i.e., beam squint, which can limit the usable bandwidth in phased array antenna systems [5], [6]. Approaches to eliminate or reduce beam squint have been studied. In [7], the authors have presented the implementation techniques based on true time delay. In [8], to solve the beam squint problem in 60 GHz, the authors have proposed three beamforming codebook designs. However, such approaches have these defects, such as high implementation cost, large size, or excessive power consumption, which make them unattractive to mobile wireless communication. In [9], the authors have proposed a denser codebook design algorithm to compensate for beam squint. In addition, multiple noncontiguous band can be aggregated to increase the bandwidth, but at the same time, it introduces significant beam squint issues [10].

The space-time block coding (STBC) based beamforming has been proposed in [11], [12] to achieve ominidirectional beampattern for massive multiple-input multiple-output (MIMO) systems to broadcast common information. In this paper, we propose a STBC based beamforming to guarantee little variation in beam gain for all subcarriers in the wideband system with a given beam focus. The main contributions of the paper are three-fold.

The rest of this paper is organized as follows. Section II introduces the system model and the effect of beam squint. Section III proposes an effective beamforming scheme to minimize the beam squint for all subcarriers in the wideband system. Numerical results are given in Section IV, while Section V concludes this paper.

We consider a uniform linear array (ULA) antenna with M radiation elements as shown in Fig. 1 at the transmitter. The distance between any two adjacent antenna elements is denoted by d

. The ULA downlink steering vector towards the virtual angle

where [⋅]T indicates the transpose of a vector, f is the signal frequency, and c is the speed of light. The effect of phase shifters can be modeled by the beamforming vector:

where βm is the phase of the mth phase shifter connected to the mth antenna in the array.

The beam pattern in virtual angle θ is given by:

In [9], to achieve the highest array gain for a beam focus θ0 among all possible beamforming vectors, the phase shifts should be:

To compensate for the beam squint and guarantee little variation in beam gain for all subcarriers in the wideband system, we consider a Alamouti based beamforming scheme. The transmitted signals are first encoded using a STBC encoder. The parallel outputs of STBC encoder si(t) and si(t+1), i=1,2, to be transmitted in time slot t and t+1 can be intuitively expressed in matrix as:

where 1√2 is to ensure fixed total transmit power.

Subsequently, the STBC encoder outputs s1 and s2 are processed by two transmit beamformers with weights w1 and w2, respectively, and summed together. Then, at the receiver side, through linear combination of the useful signals while ignoring the noise in two time slots, we have

Then, with weights ΓH, we can obtain the equivalent processing gain for the transmitted signals s1 and s2 as

where α21=|wH1a(f,θ)|2 and α22=|wH2a(f,θ)|2. That is, it is possible for us to expressed the virtual beam pattern for the transmitted signal in virtual angle θ as

To achieve the best possible compromise in terms of spectral efficiency and quality of multistream separation, hybrid analog-digital beamforming is applied in mmWave communication systems. Consider an multi-users multiple-input multiple-output (MU-MIMO) communication system with single-antenna users shown in Fig. 2 for example. The transmitter equipped with M antennas and NRF RF chains transmits K data streams to K single-antenna users. In the fully-connected hybrid beamforming structure, the transmitter is assumed to apply a baseband precoder FBB∈CNRF×K followed by a RF precoder FRF∈CM×NRF. Then the received signals of the users are given by

Suppose the bandwidth of the signal is B. Let D=[fc−f0,fc+f0]=DML∪DSL be the total frequency range, where DML=[fc−B2,fc+B2] and DSL=D∖DML represent the frequency range for the main lobe and the side lobe, respectively, with f0≫B.

The beam pattern with weight w over different frequencies with given beam focus θ0 can be expressed as:

We would like little variation in the beam pattern for different frequencies within the bandwidth. The average beam gain PI in the beam covering DML is given by:

Meanwhile, we want the average beam gain in the side lobe:

to be limited for large power efficiency.

Therefore, the design of wi can be formulated as the following optimization problem111Note that the desired beam pattern may vary for hybrid beamforming, which can be approximated by discrete samplings of θ for (12a)-(12d) [15]. The same method in the following still applies.:

where ε indicates the strength of the ripples within the beam range in dB and γ is some value satisfying (12e) and ζ is a small adjustable restriction parameter.

It is observed that both the objective function and constraints in (12) are linear in the matrix wwH. By introducing a variable X=wwH, it is clear that

Clearly, the problem P2 falls into the category of convex programming. To solve it, the package CVX for specifying and solving convex programs is used [14]. In general, there is no guarantee that P2 always admits a rank-one or rank two solution. In such a case, eigenvalue decomposition and projection are needed to extract a feasible solution for P1. Let r be the number of eigenvalues greater than some small value ξ>0. We have the approximate eigen-decomposition as

are the respective eigenvectors. Note that

tr(X⋆)=1, so ∑Mi=1μi=1. If r=1, we output w=1√Mexp(j∠u1); if r>1, the STBC based beamforming scheme will be incorporated, and we extract two feasible solutions (w1,w2) from the r effective eigenvectors that maximize the virtual beam pattern. The detailed computational procedure is shown by Algorithm 1. Note that the algorithm can be performed offline and the complexity is not a big issue.

In this section, we evaluate the performance of the proposed transmission scheme and consider the fine beam as the baseline [9]. Due to the symmetry of each beam pattern, we only show the performance of half the beam focus range θ0∈(0,1). We assume that the transmitter is equipped with M=64 ULA antennas with wavelength d=λc/2 spacing between adjacent antennas. ξ is set to be 0.1.

In this paper, we have investigated the beam squint problem in millimeter wave communication system. We have proposed a beamforming design that maximizes the average beam gain within the bandwidth with little fluctuation in different frequencies within the bandwidth while minimizing the average beam gain outside the bandwidth, and developed a STBC based beamforming scheme. Through numerical results, we have demonstrated that our proposed transmission scheme can effectively compensate for the beam squint and improve the throughput performance for wideband communication system in certain cases.