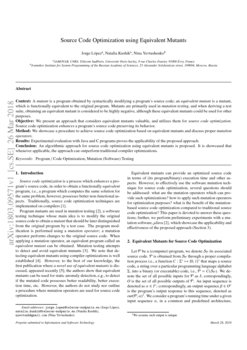 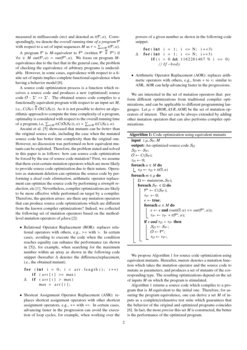 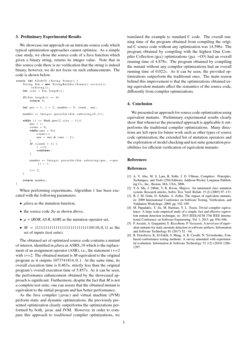 ; the authors show that equivalent mutants can be used for static anomaly detection, e.g., to detect if the mutated code possesses better readability, better execution time, etc. However, the authors do not study nor outline a procedure where mutation operators are used for source code optimization.

Given a (computer) program P, we denote SP its associated source code. P is obtained from SP through a proper compilation process, i.e., a function C:Σ∗↦{0,1}∗ that maps a program’s source code (a string over a particular programming language alphabet Σ) into a binary (or executable) code, i.e., P=C(SP). We denote the set of all possible inputs for P as I; correspondingly, O is the set of all possible outputs of P. An input sequence is denoted as α∈I∗; correspondingly, an output sequence β∈O∗ is the program’s output response to this sequence, denoted as out(P,α)222We assume that the program is deterministic and, therefore, such output is unique.. We consider a program’s running time under a given input sequence α, in a common and predefined architecture, measured in milliseconds (ms) and denoted as t(P,α). Correspondingly, we denote the overall running time of a program P with respect to a set of input sequences M as τ=∑α∈Mt(P,α).

A program P is M-equivalent to P′ (written PM≡P′) if ∀α∈Mout(P,α)=out(P′,α). We focus on program M-equivalence due to the fact that in the general case, the problem of checking the equivalence of two arbitrary programs is undecidable. However, in some cases, equivalence with respect to a finite set of inputs implies complete functional equivalence when having a behavior model mbt1 . Furthermore, many programs are used only within a context, receiving only a subset of possible (defined) inputs, or the program is only developed for a subset of inputs. Likewise, it is well-known that regression tests (a finite subset of the program inputs) are becoming an industry standard, and they somehow guarantee that a new version (including an optimized one) behaves as required.

Arcaini et al. noveluseofmutants showcased that mutants can be better than the original source code, including the case when the mutated source code has better time complexity than the original one. However, no discussion was performed on how equivalent mutants can be exploited. Therefore, the problem stated and solved in this paper is as follows: how can source code optimization be forced by the use of source code mutation? It is important to highlight that the use of source code mutants to enhance the source code’s non-functional properties is limited in the literature; for a comprehensive survey on the subject the interested reader can refer to mutatnssurvey .

We are interested in the set of mutation operators that perform different optimizations from traditional compiler optimizations, and can be applicable to different programming languages. Let μ={ROR,ASR,AOR} be the set of mutation operators of interest. This set can be always extended by adding other mutation operators that can also perform compiler optimizations. We aim at limiting the mutation operators to be considered in order to avoid deriving mutants that do not optimize the source code. Indeed, executing all mutants against the set of inputs M may take a very long time. However, we note that even if the optimization process takes more time than executing the original program once, the time investment can be worthy for widespread programs which may be executed in millions of devices, or systems for which critical components are executed millions of times. Furthermore, selecting the critical parts of the code to be optimized can aid to reduce the complexity of this approach.

We propose Algorithm 1 for source code optimization using equivalent mutants. Hereafter, mutate denotes a mutation function which takes the mutation operator and the source code to mutate as parameters, and produces a set of mutants of the corresponding type. The resulting optimizations depend on the set of inputs M on which the program is stimulated.

Algorithm 1 returns a source code which compiles to a program that is M-equivalent to the initial one. Therefore, for assuring the program equivalence, one can derive a set M of inputs as a complete/exhaustive test suite which guarantees that the original and optimized programs have the same behavior mbt1 . In fact, the more precise this set M is constructed, the higher is the guarantee of the equivalence between the optimized and the original programs.

As a simple case study, we chose the source code of an intricate Java function which given a binary string, returns its integer value. Note that in this source code there is no verification that the string is indeed binary, however, we do not focus on such enhancements. The source code is shown below.

When performing experiments, Algorithm 1 has been executed with the following parameters:

The obtained set of optimized source code contains a mutant of interest, identified in μJava as ASRS_18 which is the replacement of an assignment operator (ASR), i.e., the statement i+=2 with i*=2. The obtained mutant is M-equivalent to the original program as it outputs 1073741814,0,1. At the same time, its overall execution time is 0.463s, strictly less than the original program’s overall execution time of 5.857s. As it can be seen, the performance enhancement obtained by the showcased approach is significant. Furthermore, despite the fact that M is not a complete test suite, one can assure that the obtained mutant is equivalent to the initial program. Indeed, the variable number (the return value of the function) gets updated only when the continue instruction is not executed. The continue instruction is not executed under the condition that there exists more than one ‘1’ in the binary representation of the iterator i. Any binary string with only one ‘1’ represents a power of two; that implies that the next time the condition does not execute the continue instruction occurs when the iterator i equals i*2.

We presented an approach for source code optimization using equivalent mutants. Preliminary experimental results show that the presented approach can outperform the traditional compiler optimizations, whenever the approach is applicable. Many directions are left open for future work and perhaps the most important of them is the study of the applicability of the approach, by performing a thorough experimental evaluation. Other interesting directions include studying other types of source code optimization together with the extended list of mutation operators and the exploration of symbolic model checking for the efficient verification of equivalent mutants.