When a feed-forward neural network (FNN) is trained for source ranging in an ocean waveguide, it is difficult evaluating the range accuracy of the FNN on unlabeled test data. A fitting-based early stopping (FEAST) method is introduced to evaluate the range error of the FNN on test data where the distance of source is unknown. Based on FEAST, when the evaluated range error of the FNN reaches the minimum on test data, stopping training, which will help to improve the ranging accuracy of the FNN on the test data. The FEAST is demonstrated on simulated and experimental data. 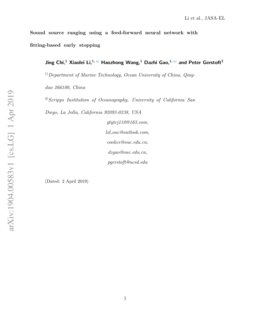 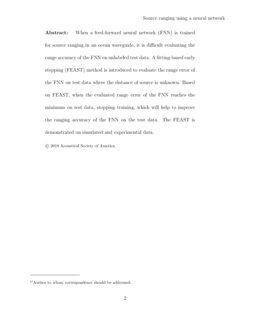 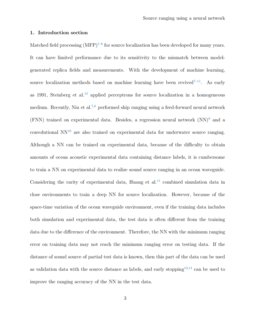 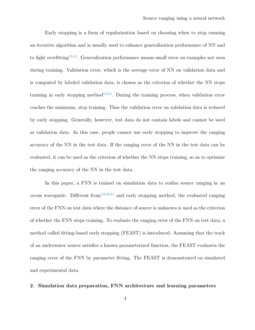 It will be useful to introduce the parameters used for simulation. Let E1 represent an range independent ocean waveguide which will be used for modeling the training data. The parameters of E1 are given by the S5 event in the SWellEx-96 experiment website_12 . The sound speed profile (SSP) and the seabed parameters of E1 are shown in Fig. 1 (a) and (b). The vertical line array (VLA) had 21 elements from 94.125–212.25 m in depth. Let E2 represent a range independent ocean waveguide which is used for modeling the test data. Except for the SSP, see Fig. 1 (a), the parameters of E2 are the same as E1.

The simulated training and test data set are prepared as follows. Selecting a domain D in E1, which is 1100–5000 m in range from the VLA and 1–30 m below the sea surface, a training set containing 12,000 samples is constructed by choosing 12,000 source locations in D uniformly. Let p=[p1,⋯,p21]T represent the acoustic signal received by the VLA when a 232 Hz point source is in the D, computed by Kraken kraken

. Then the input of FNN can be constructed by vectorizing the normalized sample covariance matrix

C=ppH/∥p∥22, see Niu_8 . Considering the Hermite symmetry of C and the fact that C is a complex matrix, C contains 11×21×2 independent real numbers, which make up x∈R462×1, the input of the FNN. The label in the training set is obtained by dividing D into 201 parts uniformly in range direction and encoding the distance information in a 201-dimensional vector y∈R201×1. If a source is in the mth part of D, the mth element of y is 1, all others are 0. The test set is generated by a moving 232 Hz point source positioned 9 m below the sea surface and leaves the VLA in E2 at uniform velocity; see the black solid line in Fig. 2 (b). The VLA records data at every 10 s and records 80 sets of data. When recording data, the moving point source is considered static. Then the test data which contain 80 samples are constructed in the same way as the training data except that the test data contains no labels. The differences between training and test data are mainly caused by environmental differences.

A four-hidden-layered FNN with 1024 neurons in each hidden layer is used, see Fig. 1

represents epoch which is a measure of number of iterations in training,

represents the probability of a source in the

mth part of D. The maximum of fα(xi) represent the likely source position and the source–VLA range is expressed by gα(xi). When fα(xi)=yi, l(fα(xi),yi) has a minimum of 0. Fig. 2 (a) shows L(α).

is used to evaluate the performance on the test data, where M is number of test data. Take a moving source from a a VLA as the example in this paper. Generally, the distance between a moving source and the VLA is a simple curve in the time-distance plane, which can be fitted by polynomials of finite order. For example, if the source moves from the VLA at constant speed, the function is the first-order polynomial on time, and if the source moves from VLA at constant acceleration, the function is a second-order polynomial. For simplicity, only a source moving at constant speed is considered, thus F(^xi,Θ)=F(^x(ti),a,b)=ati+b, where ti is the ith time instance and Θ=[a,b]. Define one loss function as

and λ∈R is a regularization parameter. Here

and the parametric model of known form

F(^xi,aα,bα) and evaluates the ranging error of the FNN on the test data. When LFEAST(α) reaches the minimum or converges, stop training the FNN. Note that the training process of the FNN is completed by optimizing L(α), and LFEAST(α) just indicates when to stop. Because it is necessary to calculate LFEAST(α) by fitting parameters {aα,bα} and LFEAST(α) reaches its minimum before L(α), this method is called fitting-based early stopping (FEAST). Not only in FNN, the FEAST is used in other types of neural network to improve ranging accuracy on test data.

To demonstrate FEAST, the test data prepared in Sec. II is used to calculate LFEAST(α). Fig. 2 (a) shows LFEAST(α) which has minimum at α=52. In order to facilitate the understanding of FEAST, Fig. 2 (d)-(f) show gα(^xi) and F(^xi,aα,bα) at different α, and one find that gα(^xi) and F(^xi,aα,bα) are similar when LFEAST(α) reaches its minimum. Fig. 2 (b) indicates that g52(^xi) is close to the true range in the test data. For comparison, Fig. 2 (b) also shows g2000(^xi) and the range from MFP where the ocean waveguide environment used in MFP is E1. Except for the points near 620 s, the range from MFP and g52(^xi) are almost the same and slightly deviate from the true source distance which is caused by the difference between E1 and E2. However, the ranging results of g2000(^xi) have larger derivations. Define the relative mean square error (RMSE) for ranging:

FEAST is demonstrated with the experimental data from the SWellEx-96 Event S5 website_12 . Only the 232 Hz shallow source that was towed at a depth of about 9 m is considered. The data recorded by VLA from 3700 to 4500 s are selected to prepare the experimental test data; every 10 s of data is used to construct a test data. The experimental test set contains 80 samples. Fig. 3 (a) shows LFEAST(α) which is computed by the experimental test data and reaches the minimum at α=53. Fig. 3 (d)-(f) show gα(^xi) and F(^xi,aα,bα) at different α, and one again finds that gα(^xi) and F(^xi,aα,bα) are similar when LFEAST(α) reaches the minimum. Fig. 3 (b) indicates that g53(^xi) is close to the GPS range. For comparison, Fig. 3 (b) also shows the ranging results g2000(^xi) and the range from MFP where the ocean waveguide environment used in MFP is E1. It can be seen that, except for the points at 20, 60, 70 s, the range from MFP and g53(^xi) are almost the same and slightly deviate from the GPS range of the moving source, which is caused by the difference between E1 and the experimental environment. However, the ranging results g2000(^xi) have larger derivations from the GSP range. Fig. 3 (c) gives the RMSE of gα(^xi). One can find that when α=53, the value of RMSE (0.0577) is closed to the minimum (0.0528), which verifies the FEAST again.

A method called FEAST is introduced to evaluate the ranging error of a FNN for source ranging on test data set. The FEAST is demonstrated by simulated and experimental data. FEAST, which requires that the trajectory of a moving sound source satisfies a known parameterized function, is used for data post-processing but not real-time processing. The results indicates that FEAST improves the ranging accuracy of the FNN on test data. The FEAST is used for source ranging in this paper, but it can be used in other applications which has a known parameterized function.

This work is supported by the National Natural Science Foundation of China under Grant Nos. 11674294 and 11704359, the Fundamental Research Funds for the Central Universities under Grant No. 201861011 and Qingdao National Laboratory for Marine Science and Technology Foundation under Grant No. QNLM2016ORP0106. The authors also thank Ning Wang and Ruichun Tang for their useful suggestions for this paper.