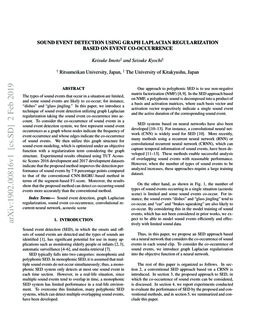 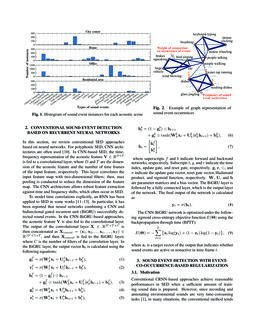 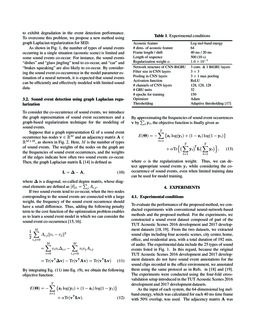 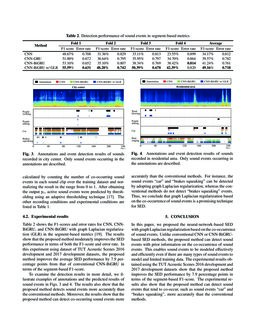 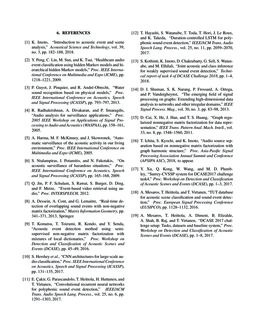 A limited number of types of sound event occur in an acoustic scene and ...
Keisuke Imoto, et al. ∙

Due to the growing demand for improving surveillance capabilities in sma...
Tito Spadini, et al. ∙

Ensuring performance robustness for a variety of situations that can occ...
Jaejun Lee, et al. ∙

Sound event detection (SED), in which the onsets and offsets of sound events are detected and the types of sounds are identified [1], has significant potential for use in many applications such as monitoring elderly people or infants [2, 3], automatic surveillance [4, 5, 6], and media retrieval [7].

One approach to polyphonic SED is to use non-negative matrix factorization (NMF) [8, 9]

. In the SED approach based on NMF, a polyphonic sound is decomposed into a product of a basis and activation matrices, where each basis vector and activation vector respectively indicate a single sound event and the active duration of the corresponding sound event. SED systems based on neural networks have also been developed

. For instance, a convolutional neural network (CNN) is widely used for SED

[10]. More recently, many methods using a recurrent neural network (RNN) or convolutional recurrent neural network (CRNN), which can capture temporal information of sound events, have been developed [11, 12, 13]. These methods enable successful analysis of overlapping sound events with reasonable performance. However, when the number of types of sound events to be analyzed increases, these approaches require a large training dataset.

In this section, we review conventional SED approaches based on neural networks. For polyphonic SED, CNN architectures are often used [10]. In CNN-based SED, the time-frequency representation of the acoustic feature V∈RD×T is fed to a convolutional layer, where D and T

are the dimension of the acoustic feature and the number of time frames of the input feature, respectively. This layer convolutes the input feature map with two-dimensional filters; then, max pooling is conducted to reduce the dimension of the feature map. The CNN architecture allows robust feature extraction against time and frequency shifts, which often occur in SED.

To model time correlations explicitly, an RNN has been applied to SED in some works [11, 12, 13]

. In particular, it has been reported that neural networks combining a CNN and bidirectional gated recurrent unit (BiGRU) successfully detected sound events. In the CNN-BiGRU-based approaches, the acoustic feature

are parameter matrices and a bias vector. The BiGRU layer is followed by a fully connected layer, which is the output layer of the network. The final output of the network is calculated as

using the backpropagation through time (BPTT):

where zt is a target vector of the output that indicates whether sound events are active or nonactive in time frame t.

Conventional CRNN-based approaches achieve reasonable performances in SED when a sufficient amount of training sound data is prepared. However, since recording and annotating environmental sounds are very time-consuming tasks [1], in many situations, the conventional method tends to exhibit degradation in the event detection performance. To overcome this problem, we propose a new method using graph Laplacian regularization for SED.

, the number of types of sound events occurring in a single situation (acoustic scene) is limited and some sound events co-occur. For instance, the sound events “dishes” and “glass jingling” tend to co-occur, and “car” and “brakes squeaking” are also likely to co-occur. By considering the sound event co-occurrence in the model parameter estimation of a neural network, it is expected that sound events can be efficiently and effectively modeled with limited sound data.

where Δ is a diagonal, so-called degree matrix, whose diagonal elements are defined as [δ]ii=∑jAi,j.

If two sound events tend to co-occur, when the two nodes corresponding to the sound events are connected with a large weight, the frequency of the sound event occurrence should have a small difference. Thus, adding the following penalty term to the cost function of the optimization problem enables us to learn a sound event model in which we can consider the sound event co-occurrence [17, 18].

By integrating Eq. (11) into Eq. (9), we obtain the following objective function:

By approximating the frequencies of sound event occurrences v by ∑tyt, the objective function is finally given as

where α is the regularization weight. Thus, we can detect appropriate sound events yt while considering the co-occurrence of sound events, even when limited training data can be used for model training.

As the input of each system, the 64-dimensional log mel-band energy, which was calculated for each 40 ms time frame with 50% overlap, was used. The adjacency matrix A was calculated by counting the number of co-occurring sound events in each sound clip over the training dataset and normalizing the result in the range from 0 to 1. After obtaining the output yt, active sound events were predicted by thresholding using an adaptive thresholding technique [19]. The detection performance was evaluated by the F1-score and error rate in the segment-based metrics [22], in which the segment length is set to 40 ms. The other recording conditions and experimental conditions are listed in Table 1.

Table 2 shows the F1-scores and error rates for CNN, CNN-BiGRU, and CNN-BiGRU with graph Laplacian regularization (GLR). The results show that the proposed method moderately improves the SED performance in terms of both the F1-score and error rate. In this experiment using the TUT Sound Events and Acoustic Scenes datasets, the proposed method improves the average SED performance by 7.9 percentage points from that of conventional CNN-BiGRU in terms of the F1-score.