Some results on multithreshold graphs

Jamison and Sprague defined a graph G to be a k-threshold graph with thresholds θ_1 , ..., θ_k (strictly increasing) if one can assign real numbers (r_v)_v ∈ V(G), called ranks, such that for every pair of vertices v,w, we have vw ∈ E(G) if and only if the inequality θ_i ≤ r_v + r_w holds for an odd number of indices i. When k=1 or k=2, the precise choice of thresholds θ_1, ..., θ_k does not matter, as a suitable transformation of the ranks transforms a representation with one choice of thresholds into a representation with any other choice of thresholds. Jamison asked whether this remained true for k ≥ 3 or whether different thresholds define different classes of graphs for such k, offering 50 for a solution of the problem. Letting C_t for t > 1 denote the class of 3-threshold graphs with thresholds -1, 1, t, we prove that there are infinitely many distinct classes C_t, answering Jamison's question. We also consider some other problems on multithreshold graphs, some of which remain open. 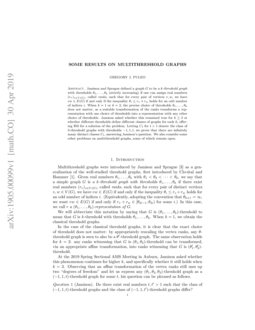 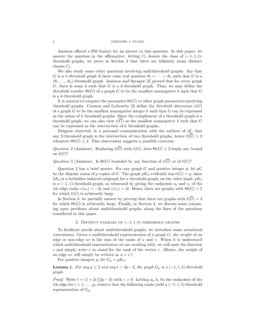 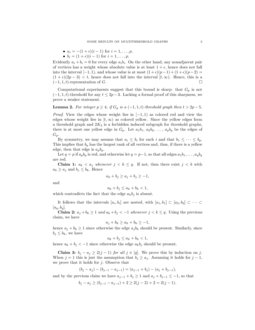 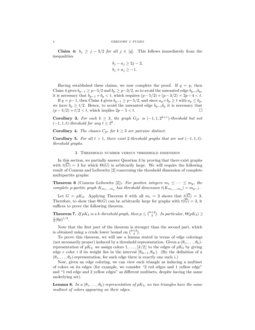 Multithreshold graphs were introduced by Jamison and Sprague [3] as a generalization of the well-studied threshold graphs, first introduced by Chvátal and Hammer [1]. Given real numbers θ1,…,θk with θ1<θ2<⋯<θk, we say that a simple graph G is a k-threshold graph with thresholds θ1,…,θk if there exist real numbers (rv)v∈V(G), called ranks, such that for every pair of distinct vertices v,w∈V(G), we have vw∈E(G) if and only if the inequality θi≤rv+rw holds for an odd number of indices i. (Equivalently, adopting the convention that θk+1=∞, we want vw∈E(G) if and only if rv+rw∈[θ2i−1,θ2i) for some i.) In this case, we call r a (θ1,…,θk)-representation of G.

We will abbreviate this notation by saying that G is (θ1,…,θk)-threshold to mean that G is k-threshold with thresholds θ1,…,θk. When k=1, we obtain the classical threshold graphs.

At the 2019 Spring Sectional AMS Meeting in Auburn, Jamison asked whether this phenomenon continues for higher k, and specifically whether it still holds when k=3

. Observing that an affine transformation of the vertex ranks still uses up two “degrees of freedom” and let us express any

Jamison offered a $50 bounty for an answer to this question. In this paper, we answer the question in the affirmative: letting Ct denote the class of (−1,1,t)-threshold graphs, we prove in Section 2 that there are infinitely many distinct classes Ct.

Doignon observed, in a personal communication with the authors of [4], that any 2-threshold graph is the intersection of two threshold graphs, hence t(¯¯¯¯G)≤2 whenever Θ(G)≤2. This observation suggests a possible converse:

Question 2 has a brief answer. For any graph G and positive integer p, let pG be the disjoint union of p copies of G. The graph pK2 evidently has t(G)=p, since 2K2 is a forbidden induced subgraph for a threshold graph; on the other hand, pK2 is a (−1,1)-threshold graph, as witnessed by giving the endpoints ui and vi of the ith edge ranks r(ui)=−2i and r(vi)=2i. Hence there are graphs with Θ(G)=2 for which t(G) is arbitrarily large.

In Section 3, we partially answer by proving that there are graphs with t(¯¯¯¯G)=3 for which Θ(G) is arbitrarily large. Finally, in Section 4, we discuss some remaining open problems about multithreshold graphs, along the lines of the questions considered in this paper.

Computational experiments suggest that this bound is sharp: that Gp is not (−1,1,t)-threshold for any t≤2p−3. Lacking a formal proof of this sharpness, we prove a weaker statement.

By symmetry, we may assume that ai≤bi for each i and that b1≤⋯≤bp. This implies that bp has the largest rank of all vertices and, thus, if there is a yellow edge, then that edge is apbp.

which contradicts the fact that the edge akbj is absent.

hence aj+bk≥1 since otherwise the edge ajbk should be present. Similarly, since bj≤bk, we have

hence ak+bj<−1 since otherwise the edge akbj should be present.

Claim 4: bj≥j−3/2 for all j∈[q]. This follows immediately from the inequalities

The classes C2k for k≥3 are pairwise distinct.

In this section, we partially answer Question 3 by proving that there exist graphs with t(¯¯¯¯G)=3 for which Θ(G) is arbitrarily large. We will require the following result of Cozzens and Leibowitz [2] concerning the threshold dimension of complete multipartite graphs:

Note that the first part of the theorem is stronger than the second part, which is obtained using a crude lower bound on (k+23).

Now, given an edge coloring, we can view each triangle as inducing a multiset of colors on its edges (for example, we consider “2 red edges and 1 yellow edge” and “1 red edge and 2 yellow edges” as different multisets, despite having the same underlying set).

In a (θ1,…,θk)-representation of pK3, no two triangles have the same multiset of colors appearing on their edges.

Before proving the lemma, we show how the proof of the theorem follows immediately.

When p=1, both parts of the theorem clearly hold, since k≥1 is required. For p≥2, observe that pK3 has an induced 2K2 and thus is not a threshold graph; thus, we may assume k≥2.

Suppose to the contrary that two triangles x1,x2,x3 and y1,y2,y3 have the same multiset of colors on their edges. Without loss of generality, we may assume that:

Now we will derive our contradiction using the absence of the xiyj-edges.

forcing a red x1y2-edge, a contradiction.

forcing a pink y2x3-edge, a contradiction.

forcing a yellow y1x3-edge, again a contradiction. This completes the proof. ∎

After being informed of a preliminary version of the results in Section 2, Jamison (personal communication) suggested studying the class D=⋂t>1Ct, where Ct is the class of (−1,1,t)-threshold graphs.

Is there a nice characterization of the class D?

Are there uncountably many distinct classes Ct?

Are there distinct real numbers t,t′>1 such that Ct=Ct′?

Theorem 7 only partially answers Question 3, which seeks a bound of Θ(G) in terms of t(¯¯¯¯G) or t(G). In particular, the following questions remain open:

I thank Robert E. Jamison both for posing the original Question 1 that motivated this paper as well as the thought-provoking followup questions 2 and 3 after receiving a preliminary version of these results.