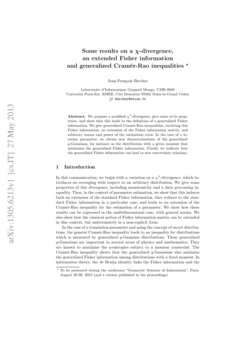 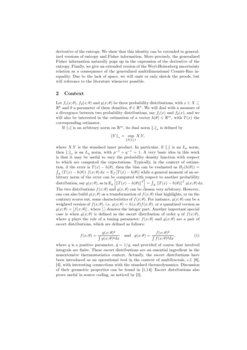 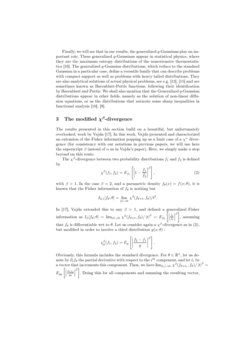 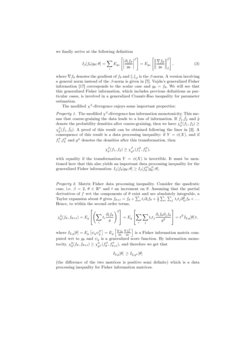 On some interrelations of generalized q-entropies and a generalized Fisher information, including a Cramér-Rao inequality

In this communication, we describe some interrelations between generaliz...
Jean-François Bercher, et al. ∙

We establish lower bounds on the volume and the surface area of a geomet...
Jing Hao, et al. ∙

Fisher Information of a Family of Generalized Normal Distributions

In this brief note we compute the Fisher information of a family of gene...
Precious Ugo Abara, et al. ∙

In this paper, we aim to replace in the definitions of covariance and co...
Ali Dadkhah, et al. ∙

It has been conjectured that the Fisher divergence is more robust to mod...
Khalil Elkhalil, et al. ∙

In this communication, we begin with a variation on a χβ-divergence, which introduces an averaging with respect to an arbitrary distribution. We give some properties of this divergence, including monotonicity and a data processing inequality. Then, in the context of parameter estimation, we show that this induces both an extension of the standard Fisher information, that reduces to the standard Fisher information in a particular case, and leads to an extension of the Cramér-Rao inequality for the estimation of a parameter. We show how these results can be expressed in the multidimensional case, with general norms. We also show how the classical notion of Fisher information matrix can be extended in this context, but unfortunately in a non-explicit form.

In the case of a translation parameter and using the concept of escort distributions, the general Cramér-Rao inequality leads to an inequality for distributions which is saturated by generalized q

be three probability distributions, with

x∈X⊆Rk and θ a parameter of these densities, θ∈Rn. We will deal with a measure of a divergence between two probability distributions, say f1(x) and f2(x),

h(θ)∈Rm, with T(x) the corresponding estimator.

If ∥.∥ is an arbitrary norm on Rm, its dual norm ∥.∥∗ is defined by

A very basic idea in this work is that it may be useful to vary the probability density function with respect to which are computed the expectations. Typically, in the context of estimation, if the error is

T(x)−h(θ), then the bias can be evaluated as Bf(h(θ))=∫X(T(x)−h(θ))f(x;θ)dx=Ef[T(x)−h(θ)] while a general moment of an arbitrary norm of the error can be computed with respect to another probability distribution, say g(x;θ), as in . The two distributions f(x;θ) and g(x,θ) can be chosen very arbitrary. However, one can also build g(x;θ) as a transformation of f(x;θ) that highlights, or on the contrary scores out, some characteristics of f(x;θ). For instance, g(x;θ) can be a weighted version of f(x;θ), i.e. g(x;θ)=h(x;θ)f(x;θ), or a quantized version as g(x;θ)=[f(x;θ)], where [.] denotes the integer part. Another important special case is when g(x;θ) is defined as the escort distribution of order q of f(x;θ), where q plays the role of a tuning parameter: f(x;θ) and g(x;θ) are a pair of escort distributions, which are defined as follows:

where q is a positive parameter, ¯q=1/q, and provided of course that involved integrals are finite. These escort distributions are an essential ingredient in the nonextensive thermostatistics context. Actually, the escort distributions have been introduced as an operational tool in the context of multifractals, c.f. [8], [4], with interesting connections with the standard thermodynamics. Discussion of their geometric properties can be found in [1, 14]. Escort distributions also prove useful in source coding, as noticed by [5].

The results presented in this section build on a beautiful, but unfortunately overlooked, work by Vajda [17]. In this work, Vajda presented and characterized an extension of the Fisher information popping up as a limit case of a χα divergence (for consistency with our notations in previous papers, we will use here the superscript β instead of α as in Vajda’s paper). Here, we simply make a step beyond on this route.

with β>1. In the case β=2, and a parametric density fθ(x)=f(x;θ), it is known that the Fisher information of fθ is nothing but

In [17], Vajda extended this to any β>1, and defined a generalized Fisher information as Iβ[fθ;θ]=lim|t|→0χβ(fθ+t,fθ)/|t|β=Efθ[∣∣∣˙fθfθ∣∣∣β], assuming that fθ is differentiable wrt to θ. Let us consider again a χβ-divergence as in (2), but modified in order to involve a third distribution g(x;θ):

Obviously, this formula includes the standard divergence. For θ∈Rn, let us denote by ∂ifθ the partial derivative with respect to the ith component, and let ti be a vector that increments this component. Then, we have lim|ti|→0χβ(fθ+ti,fθ)/|t|β=Egθ[∣∣∂ifθgθ∣∣β]. Doing this for all components and summing the resulting vector, we finally arrive at the following definition

The modified χβ-divergence has information monotonicity. This means that coarse-graining the data leads to a loss of information. If ~f1,~f2 and ~g denote the probability densities after coarse-graining, then we have χβg(f1,f2)≥χβ~g(~f1,~f2). A proof of this result can be obtained following the lines in [2]. A consequence of this result is a data processing inequality: if Y=ϕ(X), and if fϕ1,fϕ2 and gϕ denotes the densities after this transformation, then

with equality if the transformation Y=ϕ(X) is invertible. It must be mentioned here that this also yields an important data processing inequality for the generalized Fisher information: Iβ[fθ|gθ;θ]≥Iβ[fϕθ|gϕθ;θ].

Matrix Fisher data processing inequality. Consider the quadratic case, i.e. β=2, θ∈Rn and t an increment on θ. Assuming that the partial derivatives of f wrt the components of θ exist and are absolutely integrable, a Taylor expansion about θ gives fθ+t=fθ+∑iti∂ifθ+12∑i∑jtitj∂2ijfθ+… Hence, to within the second order terms,

where I2,g[θ]=Eg[ψgψTg]=Eg[∇fθgθ∇fTθgθ] is a Fisher information matrix computed wrt to gθ and ψg is a generalized score function. By information monotocity, χ2g(fθ,fθ+t)≥χ2gϕ(fϕθ,fϕθ+t), and therefore we get that

(the difference of the two matrices is positive semi definite) which is a data processing inequality for Fisher information matrices.

It suffices here to consider ∣∣Eg[T(f2−f1g)]∣∣=∣∣Ef2[T]−Ef1[T]∣∣ and then apply the Hölder inequality to the left hand side.

The Property 3 above can be used to derive a generalized Cramér-Rao inequality involving the generalized Fisher information (3). Let us consider the scalar case. Set f2=fθ+t, f1=fθ, and denote η=Ef[T(X)−h(θ)]. Then divide both side of (4) by t, substitute T(X) by T(X)−h(θ), and take the limit t→0. Assuming that we can exchange the order of integrations and derivations, and using the definition(3) in the scalar case, we obtain

which reduces to the standard Cramér-Rao inequality in the case α=β=2 and g=f. A multidimensional version involving arbitrary norms can be obtained by the following steps: (a) evaluate the divergence of the bias, ∇θ.Bf(θ), (b) introduce an averaging with respect to g in the resulting integral (c) apply a version of the Hölder inequality for arbitrary norms. The proof can be found in [7] for the direct estimation of the parameter θ. For the estimation of any function h(θ), we have a generalized Cramér-Rao inequality that enables to lower bound a moment of an arbitrary norm of the estimation error, this moment being computed wrt any distribution g.

[Generalized Cramér-Rao inequality, partially in [7]] Under some regularity conditions, then for any estimator T(X) of h(θ),

Many consequences can be obtained from this general result. For instance, if one chooses h(θ)=θ

and an unbiased estimator

T(X)=^θ(X), then the inequality above reduces to

Taking f=g, we obtain an extension of the standard Cramér-Rao inequality, featuring a general norm and an arbitrary power; in the scalar case, we obtain the Barankin-Vajda result [3, 17], see also [19].

When h(θ) is scalar valued, we have the following variation on the theme (proof omitted), which involves a Fisher information matrix, but unfortunately in a non-explicit form: for any matrix A, we have

where ψg=∇θf(x;θ)g(x;θ) is a score function. We define as Fisher information matrix the matrix A which maximizes the right hand side. In the quadratic case α=β=2, and using the inequality (xtx)2≤(xtBx)(xtB−1x) valid for any positive definite matrix B, one can check that the maximum is precisely attained for A−1=I2,g[θ]=Eg[ψgψtg], that is the Fisher information matrix we obtained above in Property 2, in the quadratic case. The inequality reduces to the inequality Eg[|T(X)−h(θ)|2]≥∇θh(θ)tA∇θh(θ) which is known in the standard case.

In the quadratic case, it is also possible to obtain an analog of the well known result that the covariance of the estimation error is greater than the inverse of the Fisher information matrix (in the Löwner sense). The proof follows the lines in [11, pp. 296-297] and we get that

Let us now consider the case of a location parameter θ∈Rn for a translation family f(x;θ)=f(x−θ). In such a case, we have ∇θf(x;θ)=−∇xf(x−θ). Let us also assume, without loss of generality, that f(x) has zero mean. In these conditions, the estimator T(X)=^θ(X)=X is unbiased. Finally, taking θ=0, the relation (7) leads to

[Functional Cramér-Rao inequality] For any pair of probability density functions, and under some technical conditions,

[q-Cramér-Rao inequality [7]] For any probability density g, if mα[g]=E[∥x∥α] is the moment of order α of the norm of x, and if

is the Fisher information of order (β,q), with Mq[g]=∫g(x)qdx, then

Of course, the standard de Bruijn identity is recovered in the particular case α=β=2, and q=m=1.

We close this paper by indicating that it is possible to exhibit new uncertainty relations, beginning with the generalized Cramér-Rao inequality (13). These inequalities involve moments computed with respect to escort distributions like (11). We denote by Eq[.] an expectation computed wrt an escort of order q. If ψ is a wave function, x and ξ two Fourier conjugated variables, then

For γ=θ=2, the lower bound is attained if and only is |ψ| is a generalized Gaussian. For γ=θ=2, q=1, this inequality yields a multidimensional version of the Weyl-Heisenberg uncertainty principle. For 32−1β>q, we also get the inequality