A graph G=(V,E) with a vertex set V and an edge set E is called a pairwise compatibility graph (PCG, for short) if there are a tree T whose leaf set is V, a non-negative edge weight w in T, and two non-negative reals d_≤ d_ such that G has an edge uv∈ E if and only if the distance between u and v in the weighted tree (T,w) is in the interval [d_, d_]. PCG is a new graph class motivated from bioinformatics. In this paper, we give some necessary and sufficient conditions for PCG based on cut-vertices and twins, which provide reductions among PCGs. Our results imply that complete k-partite graph, cactus, and some other graph classes are subsets of PCG. 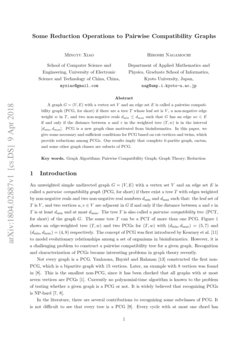 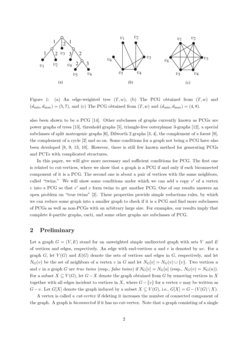 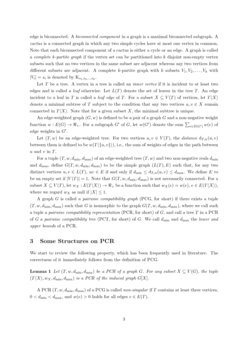 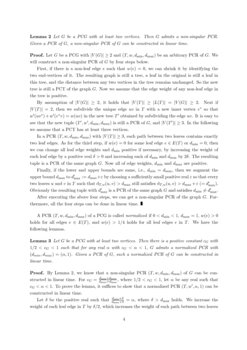 An unweighted simple undirected graph G=(V,E) with a vertex set V and an edge set E is called a pairwise compatibility graph (PCG, for short) if there exist a tree T with edges weighted by non-negative reals and two non-negative real numbers dmin and dmax such that: the leaf set of T is V, and two vertices u,v∈V are adjacent in G if and only if the distance between u and v in T is at least dmin and at most dmax. The tree T is also called a pairwise compatibility tree (PCT, for short) of the graph G. The same tree T can be a PCT of more than one PCG. Figure 1 shows an edge-weighted tree (T,w) and two PCGs for (T,w) with (dmin,dmax)=(5,7) and (dmin,dmax)=(4,8) respectively. The concept of PCG was first introduced by Kearney et al. [11] to model evolutionary relationships among a set of organisms in bioinformatics. However, it is a challenging problem to construct a pairwise compatibility tree for a given graph. Recognition and characterization of PCGs became interesting problems in graph theory recently.

Not every graph is a PCG. Yanhaona, Bayzid and Rahman [13] constructed the first non-PCG, which is a bipartite graph with 15 vertices. Later, an example with 8 vertices was found in [8]. This is the smallest non-PCG, since it has been checked that all graphs with at most seven vertices are PCGs [1]. Currently no polynomial-time algorithm is known to the problem of testing whether a given graph is a PCG or not. It is widely believed that recognizing PCGs is NP-hard [7, 8].

In the literature, there are several contributions to recognizing some subclasses of PCG. It is not difficult to see that every tree is a PCG [9]. Every cycle with at most one chord has also been shown to be a PCG [14]. Other subclasses of graphs currently known as PCGs are power graphs of trees [13], threshold graphs [5], triangle-free outerplanar 3-graphs [12], a special subclasses of split matrogenic graphs [6], Dilworth 2 graphs [3, 4], the complement of a forest [9], the complement of a cycle [2] and so on. Some conditions for a graph not being a PCG have also been developed [8, 9, 13, 10]. However, there is still few known method for generating PCGs and PCTs with complicated structures.

In this paper, we will give more necessary and sufficient conditions for PCG. The first one is related to cut-vertices, where we show that a graph is a PCG if and only if each biconnected component of it is a PCG. The second one is about a pair of vertices with the same neighbors, called “twins.” We will show some conditions under which we can add a copy v′ of a vertex v into a PCG so that v′ and v form twins to get another PCG. One of our results answers an open problem on “true twins” [2]. These properties provide simple reductions rules, by which we can reduce some graph into a smaller graph to check if it is a PCG and find more subclasses of PCGs as well as non-PCGs with an arbitrary large size. For examples, our results imply that complete k-partite graphs, cacti, and some other graphs are subclasses of PCG.

Let a graph G=(V,E) stand for an unweighted simple undirected graph with sets V and E of vertices and edges, respectively. An edge with end-vertices u and v is denoted by uv. For a graph G, let V(G) and E(G) denote the sets of vertices and edges in G, respectively, and let NG(v) be the set of neighbors of a vertex v in G and let NG[v]=NG(v)∪{v}. Two vertices u and v in a graph G are true twins (resp., false twins) if NG[v]=NG[u] (resp., NG(v)=NG(u)). For a subset X⊆V(G), let G−X denote the graph obtained from G by removing vertices in X together with all edges incident to vertices in X, where G−{v} for a vertex v may be written as G−v. Let G[X] denote the graph induced by a subset X⊆V(G), i.e., G[X]=G−(V(G)∖X).

A vertex is called a cut-vertex if deleting it increases the number of connected component of the graph. A graph is biconnected if it has no cut-vertex. Note that a graph consisting of a single edge is biconnected. A biconnected component in a graph is a maximal biconnected subgraph. A cactus is a connected graph in which any two simple cycles have at most one vertex in common. Note that each biconnected component of a cactus is either a cycle or an edge. A graph is called a complete k-partite graph if the vertex set can be partitioned into k disjoint non-empty vertex subsets such that no two vertices in the same subset are adjacent whereas any two vertices from different subsets are adjacent. A complete k-partite graph with k subsets V1,V2,…,Vk with |Vi|=si is denoted by Ks1,s2,…,sk.

Let T be a tree. A vertex in a tree is called an inner vertex if it is incident to at least two edges and is called a leaf otherwise. Let L(T) denote the set of leaves in the tree T. An edge incident to a leaf in T is called a leaf edge of T. For a subset X⊆V(T) of vertices, let T⟨X⟩ denote a minimal subtree of T subject to the condition that any two vertices u,v∈X remain connected in T⟨X⟩. Note that for a given subset X, the minimal subtree is unique.

3 Some Structures on PCR

We start to review the following property, which has been frequently used in literature. The correctness of it immediately follows from the definition of PCG.

A PCR (T,w,dmin,dmax) of a PCG is called non-singular if T contains at least three vertices, 0<dmin<dmax, and w(e)>0 holds for all edges e∈E(T).

Proof. Let G be a PCG with |V(G)|≥2 and (T,w,dmin,dmax) be an arbitrary PCR of G. We will construct a non-singular PCR of G by four steps below.

First, if there is a non-leaf edge e such that w(e)=0, we can shrink it by identifying the two end-vertices of it. The resulting graph is still a tree, a leaf in the original is still a leaf in this tree, and the distance between any two vertices in the tree remains unchanged. So the new tree is still a PCT of the graph G. Now we assume that the edge weight of any non-leaf edge in the tree is positive.

In a PCR (T,w,dmin,dmax) with |V(T)|≥3, each path between two leaves contains exactly two leaf edges. As for the third step, if w(e)=0 for some leaf edge e∈E(T) or dmin=0, then we can change all leaf edge weights and dmin positive if necessary, by increasing the weight of each leaf edge by a positive real δ>0 and increasing each of dmin and dmax by 2δ. The resulting tuple is a PCR of the same graph G. Now all of edge weights, dmin and dmax are positive.

Finally, if the lower and upper bounds are same, i.e., dmin=dmax, then we augment the upper bound dmax to d′max:=dmax+ε by choosing a sufficiently small positive real ε so that every two leaves u and v in T such that dT,w(u,v)>dmax still satisfies dT,w(u,v)>dmax+ε (=d′max). Obviously the resulting tuple with d′max is a PCR of the same graph G and satisfies dmin≠d′max.

After executing the above four steps, we can get a non-singular PCR of the graph G. Furthermore, all the four steps can be done in linear time.

Let G be a PCG with at least two vertices. Then there is a positive constant cG with 1/2<cG<1 such that for any real α with cG<α<1, G admits a normalized PCR with (dmin,dmax)=(α,1). Given a PCR of G, such a normalized PCR of G can be constructed in linear time.

Most of our arguments are based on normalized PCR, since it will be helpful for us to simplify some proofs.

4 Properties on Induced Subgraphs of PCGs

Proof. The only if part trivially follows from Lemma 1. To show the if part, it suffices to consider the case where G consists of two PCG graphs G1 and G2 such that |V(G1)∩V(G2)|=1.

Lemma 4 is a powerful tool to construct PCGs. We can use it to ‘join’ small PCGs into a large PCG to find new subclasses of PCGs. An edge or a single cycle has been shown to be a PCG [14], and a cactus is a graph with each biconnected component being a cycle or an edge. By simply applying Lemma 4, we see the next.

Every cactus is a PCG.

A special case of cacti (where each biconnected component is a cycle) was shown to be a subclass of PCG [14]. However, by using Lemma 4, we can greatly simplify the proofs [14]. Furthermore, Lemma 4 can be used to construct PCGs of more complicated structures.

Twins. Since twins have similar structures, we are interested to know wether PCG remains close under the operation of adding a twin of a vertex. This problem has been considered by Calamoneri et al. [2]. They found that this property holds for false twins and raised the case for true twins as an interesting open problem. We will answer their question by exploring the property of true twins.

For false twins, the following lemma has been proven [2]. We show that this can be proven by using normalized PCR.

Lemma 6 can also be used to construct PCGs. Based on Lemma 4, we can construct large PCGs having cut-vertices. By using Lemma 6, we can increase the connectivity of PCGs. For example, for each cut-vertex in a PCG, we can add a false twin of it to the graph to get another PCG. Lemma 6 also implies the following result.

Every complete k-partite graph is a PCG.

Next, we consider true twins. In fact, the statement in Lemma 6 for true twins is no longer correct because there is an example of a non-PCG G such that deleting a vertex in true twins results in a PCG.

We show that a non-PCG remains to be a non-PCG after removing one of three true twins.

Lemma 8 implies that a PCG with true twins u1 and u2 can be augment to a larger PCG with any number of new vertices u2,…,uk so that every two vertices ui and uj, 1≤i<j≤k form true twins.