It is unknown whether or not every polycube has an edge-unfolding. A polycube is an object constructed by gluing cubes face-to-face. An edge-unfolding cuts edges on the surface and unfolds it to a net, a non-overlapping polygon in the plane. Here we explore the more restricted edge-unzippings where the cut edges form a path. We construct a polycube that has no edge-unzipping. 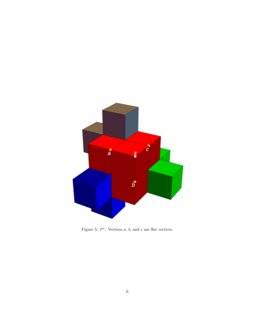 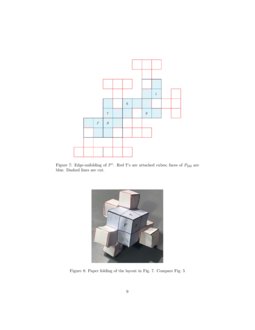 A drawing of a graph is k-plane if no edge is crossed more than k times....
Fabian Klute, et al. ∙

On the Edges of Characteristic Imset Polytopes

Fitting a 3D Morphable Model to Edges: A Comparison Between Hard and Soft Correspondences

A polycube P is an object constructed by gluing cubes whole-face to whole-face, such that its surface is a manifold. Thus the neighborhood of every surface point is a disk; so there are no edge-edge nor vertex-vertex nonmanifold surface touchings. Here we only consider polycubes of genus zero. The edges of a polycube are all the cube edges on the surface, even when those edges are shared between two coplanar faces. Similarly, the vertices of a polycube are all the cube vertices on the surface, even when those vertices are flat, incident to 2π face angles. Such polycube flat vertices are degree-4. It will be useful to distinguish these flat vertices from corner vertices, non-flat vertices with incident angles ≠2π (degree-3, -5, or -6). For a polycube P, let its 1-skeleton graph GP include every vertex and edge of P, with vertices marked as either corner or flat.

It is an open problem to determine whether every polycube has an edge-unfolding, a tree in the 1-skeleton that spans all corner vertices (but need not include flat vertices), which, when cut, unfolds the surface to a net, a planar, non-overlapping polygon [O’R19]. Here by non-overlapping is meant that no two points, each interior to a face, are mapped to same point in the plane. This allows two boundary edges to coincide in the net; so the polygon is “weakly simple.” The intent is that we want to be able to cut out the net and refold to P. Henceforth “edge-unfolding” will mean: an edge-unfolding to a net.

It would be remarkable if it were true that every polycube could be edge-unfolded, but no counterexample is known. There has been considerable exploration of orthogonal polyhedra, a more general type of object, for which there are examples that cannot be edge-unfolded [BDD+98]. (See [DF18] for citations to earlier work.) But polycubes have more edges in their 1-skeleton graphs for the cut tree to follow than do orthogonal polyhedra, so it is conceivably easier to edge-unfold polycubes.

A restriction of edge-unfolding has been studied in [DDL+10], [O’R10], [DDU13]: edge-unzipping. This is an edge-unfolding whose cut tree is a path (so that the surface could be “unzipped”). It is apparently unknown if even this highly restricted edge-unzipping could unfold every polycube to a net. The result of this note is to settle this question in the negative: two different polycubes are constructed each of which has no edge-unzipping. They are shown in Figure 1 and will be described later.

So one approach is to construct a polycube P that has no flat vertices—every vertex is a corner vertex. Then if P has no Hamiltonian path, then it has no edge-unzipping. A natural candidate is the polycube object P6 shown in Fig. 2.

However, the 1-skeleton of P6 does admit Hamiltonian paths, and indeed we found a path that unfolds P6 to a net.

The graph GP for any polycube tree P has a Hamiltonian cycle.

Proof: It is easy to see by induction that every polycube tree can be built by gluing cubes each of which touches just one face at the time of gluing: never is there a need to glue a cube to more than one face of the previously built object.

So to prove that a polycube tree has no edge-unzipping would require an argument that confronted non-overlap. This leads to an open question:

To guarantee the non-existence of Hamiltonian paths, we can exploit the bipartiteness of GP, using Lemma 2 below.

A polycube graph GP is 2-colorable, and therefore bipartite.

Proof: Label each lattice point p of Z3 with the {0,1}-parity of the sum of the Cartesian coordinates of p. A polycube P’s vertices are all lattice points of Z3. This provides a 2-coloring of GP; 2-colorable graphs are bipartite.

The parity imbalance in a 2-colored (bipartite) graph is the absolute value of the difference in the number of nodes of each color.

A bipartite graph G with a parity imbalance >1 has no Hamiltonian path.222 Stated at http://mathworld.wolfram.com/HamiltonianPath.html.

So if we can construct a polycube P that (a) has no flat vertices, and (b) has parity imbalance >1, then we will have established that P has no Hamiltonian path, and therefore no edge-unzipping. We now show that the polycube P44, illustrated in Figure 4, meets these conditions

Next observe that attaching a cube C to exactly one face of any polycube does not change the parity: the receiving face f has colors 0101, and the opposite face of C has colors 1010.

Now, P44 can be constructed by attaching six copies of a 6-cube “cross,” call it P+, which in isolation is a polycube tree and so can be built by attaching cubes each to exactly one face. And each P+ attaches to one corner cube of P222. Therefore P44 retains P222’s imbalance of 2.

The point of the P+ attachments is to remove the flat vertices of P222. Note that when attached to P222, each P+ has only corner vertices.

There is no edge-unzipping of P44.

Proof: Although it takes some scrutiny of Figure 4 to verify, P44 has no (degree-4) flat vertices. Thus an edge-unzipping must pass through every vertex, and so be a Hamiltonian path. Lemma 4 says that GP44 has imbalance 2, and Lemma 2 says it therefore cannot have a Hamiltonian path.

It turns out that the smaller polycube P14 shown in Figure 6 also has no edge-unzipping, even though it has flat vertices.

To establish this, we still need an imbalance >1, which easily follows just as in Lemma 4:

But notice that P14 has three flat vertices: a, b, and c.

There is no edge-unzipping of P14.

Proof: An edge-unzipping need not pass through the three flat vertices, a, b, and c, but it could pass through one, two, or all three. We show that in all cases, an appropriately modified subgraph of GP14 has no Hamiltonian path. Let ρ be a hypothetical edge-unzipping cut path. We consider four exhaustive possibilities, and show that each leads to a contradiction.

(1) ρ excludes one flat vertex a and includes b,c.

(Because of the symmetry of P14, it is no loss of generality to assume that it is a that is excluded.) If ρ excludes a, then it does not travel over any of the four edges incident to a. Thus we can delete a from GP14; say that G−a=GP14∖a. This graph is shown in Fig. 7.

Following the coloring in Fig. 5, all corners of P222 are colored 0, so each of the edge midpoints a,b,c is colored 1. The parity imbalance of P14 is 2 extra 0’s. Deleting a maintains bipartiteness and increases the parity imbalance of G−a to 3. Therefore by Lemma 2, G−a has no Hamiltonian path, and such a ρ cannot exist.

(Again symmetry ensures there is no loss of generality in assuming the one included flat vertex is c.) ρ must include corner x, which is only accessible in GP14 through the three flat vertices. If ρ excludes a,b, then it must include the edge cx. Let G−ab=GP14∖{a,b}. In G−ab, x has degree 1, so ρ terminates there. It must be that ρ is a Hamiltonian path in G−ab, but the deletion of a,b increases the parity imbalance to 4, and so again such a Hamiltonian path cannot exist.

Because corner x is only accessible through one of these flat vertices, ρ never reaches x and so cannot be an edge-unzipping

Thus the assumption that there is an edge-unzipping path ρ for P14 reaches a contradiction in all four cases. Therefore, there is no edge-unzipping path for P14.333 Just to verify this conclusion, we constructed these graphs in Mathematica and FindHamiltonianPath[] returned {} for each.

Now that it is known that P14 and P44 each have no edge-unzipping, it is natural to wonder if either settles the edge-unfolding open problem: Can they be edge-unfolded? Indeed both can: see Figures 8

and 9. The colors in these layouts are those used by Origami Simulator [GDG18].

Figure 10 shows a partial folding of P44, and animations are at http://cs.smith.edu/~jorourke/Unf/NoEdgeUnzip.html.

We thank participants in the Bellairs 2018 workshop for their insights.