Solving the equation P_a(X):=X^q+1+X+a=0 over finite field Q, where Q=p^n, q=p^k and p is a prime, arises in many different contexts including finite geometry, the inverse Galois problem <cit.>, the construction of difference sets with Singer parameters <cit.>, determining cross-correlation between m-sequences <cit.> and to construct error-correcting codes <cit.>, as well as to speed up the index calculus method for computing discrete logarithms on finite fields <cit.> and on algebraic curves <cit.>. Subsequently, in <cit.>, the Q-zeros of P_a(X) have been studied: in <cit.> it was shown that the possible values of the number of the zeros that P_a(X) has in Q is 0, 1, 2 or p^(n, k)+1. Some criteria for the number of the Q-zeros of P_a(x) were found in <cit.>. However, while the ultimate goal is to identify all the Q-zeros, even in the case p=2, it was solved only under the condition (n, k)=1<cit.>. We discuss this equation without any restriction on p and (n,k). New criteria for the number of the Q-zeros of P_a(x) are proved. For the cases of one or two Q-zeros, we provide explicit expressions for these rational zeros in terms of a. For the case of p^(n, k)+1 rational zeros, we provide a parametrization of such a's and express the p^(n, k)+1 rational zeros by using that parametrization. 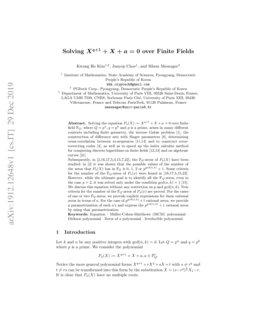 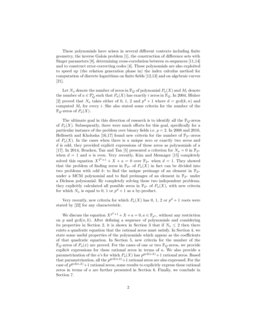 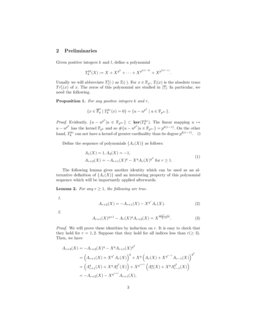 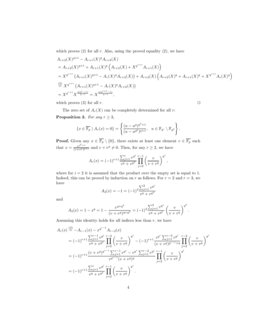 In this paper, we improve the algorithms of Lauder-Wan <cit.> and Harvey...
Qi Cheng, et al. ∙

On the Jacobi sums over Galois rings

In this paper, we study the Jacobi sums over Galois rings of arbitrary c...
Dengming Xu, et al. ∙

Folding a Tree into a Map

The main problem considered in this paper is construction and theoretica...
Jack Noonan, et al. ∙

Let k and n be any positive integers with gcd(n,k)=d. Let Q=pn and q=pk where p is a prime. We consider the polynomial

Notice the more general polynomial forms Xq+1+rXq+sX+t with s≠rq and t≠rs can be transformed into this form by the substitution X=(s−rq)1qX1−r. It is clear that Pa(X) have no multiple roots.

These polynomials have arisen in several different contexts including finite geometry, the inverse Galois problem [1], the construction of difference sets with Singer parameters [8], determining cross-correlation between m-sequences [11, 14] and to construct error-correcting codes [4]. These polynomials are also exploited to speed up (the relation generation phase in) the index calculus method for computation of discrete logarithms on finite fields [12, 13] and on algebraic curves [21].

The ultimate goal in this direction of research is to identify all the FQ-zeros of Pa(X). Subsequently, there were much efforts for this goal, specifically for a particular instance of the problem over binary fields i.e. p=2. In 2008 and 2010, Helleseth and Kholosha [16, 17] found new criteria for the number of F2n-zeros of Pa(X). In the cases when there is a unique zero or exactly two zeros and d

is odd, they provided explicit expressions of these zeros as polynomials of

a [17]. In 2014, Bracken, Tan and Tan [5] presented a criterion for Na=0 in F2n when d=1 and n is even. Very recently, Kim and Mesnager [15] completely solved this equation X2k+1+X+a=0 over F2n when d=1. They showed that the problem of finding zeros in F2n of Pa(X) in fact can be divided into two problems with odd k: to find the unique preimage of an element in F2n under a MCM polynomial and to find preimages of an element in F2n under a Dickson polynomial. By completely solving these two independent problems, they explicitly calculated all possible zeros in F2n of Pa(X), with new criteria for which Na is equal to 0, 1 or pd+1 as a by-product.

Given positive integers k and l, define a polynomial

Usually we will abbreviate Tl1(⋅) as Tl(⋅). For x∈Fpl, Tl(x) is the absolute trace Trl1(x) of x. The zeros of this polynomial are studied in [KCLGM2019]. In particular, we need the following.

For any positive integers k and r,

Evidently, {u−upk|u∈Fpkr}⊂ker(Tkrk). The linear mapping u↦u−upk has the kernel Fpk and so #{u−upk|u∈Fpkr}=pk(r−1). On the other hand, Tkrk can not have a kernel of greater cardinality than its degree pk(r−1).∎

Define the sequence of polynomials {Ar(X)} as follows:

The following lemma gives another identity which can be used as an alternative definition of {Ar(X)} and an interesting property of this polynomial sequence which will be importantly applied afterwards.

For any r≥1, the following are true.

The zero set of Ar(X) can be completely determined for all r:

where for i=2 it is assumed that the product over the empty set is equal to 1. Indeed, this can be proved by induction on r as follows. For r=2 and r=3, we have

Assuming this identity holds for all indices less than r, we have

We will show that if F(a)≠0 then the FQ-zeros of Pa(X) satisfy a quadratic equation and therefore necessarily Na≤2.

Now, we prove that for any r≥1

4 Some equalities involving F and G

To determine the FQ−rational zeros of Pa(X) when Na≤2, we will need the following properties of the polynomials F and G which appear as coefficients of the quadratic equation (4).

For any x∈Fqm, the following are true.

The first item follows from

By the way, since

Finally, the third item is verified as follows:

For p even, we will further need the following proposition.

Hence, immediately (10) follows from the facts Nrnd(a)∈Fpd and G(a)∈Fpmd∩Fpk=Fpd (which follows from (13) as a∈Fpmd). And also

By exploiting the results of previous sections, now we can completely solve the equation Pa(X)=0 in arbitrary finite fields.

Let a∈F∗Q. The following are equivalent.

is the set of all q+1 zeros of Pa(X). In fact, the cardinality of this set is exactly q+1 as u is not in Fq. Also we have

Now, we will show that the mapping

which is well-defined by Proposition 2 and the equivalence between Item 1 and Item 2, is surjective.