We present a simple algorithm to solve the quantum linear system problem (QLSP), i.e. preparing a quantum state | x〉 that is proportional to A^-1| b〉. The algorithm decomposes a general QLSP into an initial state preparation problem solved by the time-optimal adiabatic quantum computation, and an eigenstate filtering problem solved by quantum signal processing. The algorithm does not rely on phase estimation, variable-time amplitude amplification, or in fact any amplitude amplification procedure. The probability of success is Ω(1). The query complexity of the algorithm is O(κ(log(κ)/loglog(κ)+log(1/ϵ))), which is near-optimal with respect to the condition number κ up to a logarithmic factor, and is optimal with respect to the target accuracy ϵ. 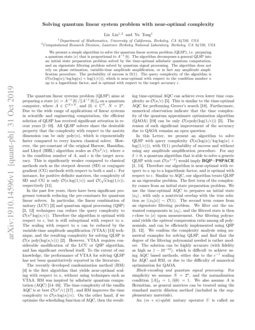 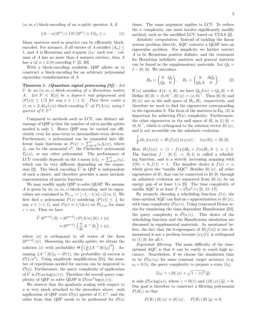 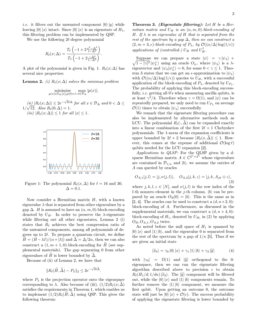 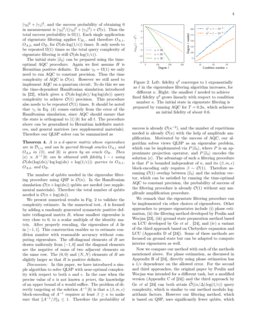 When discussing the number of queries to an oracle O, we do not distinguish between O and its controlled version. The asymptotic notations O, Ω are used for the limit κ→∞ and ϵ→0. We use ˜O to mean O

multiplied by a poly-logarithmic part. Sometimes we do not distinguish between the different ways of measuring error, e.g. in terms of fidelity or 2-norm distance of density matrices, since the query complexity is logarithmic in the error defined in both ways. Floating-point arithmetic is assumed to be exact for conciseness. If floating-point error is taken into account this will only lead to a logarithmic multiplicative overhead in the number of primitive gates, and a logarithmic additive overhead in the number of qubits needed.

The technique of block-encoding has been recently discussed extensively GilyenSuLowEtAl2019; LowChuang2019. Here we discuss how to construct block-encoding for H−λI which is used in eigenstate filtering, and Qb, H0, and H1 which are used in QLSP and in particular the Hamiltonian simulation of AQC. We first introduce a simple technique we need to use repeatedly.

Given UA, an (α,a,0)-block-encoding of A where α>0, we want to construct a block encoding of A+cI for some c∈C. This is in fact a special case of the linear combination of unitaries (LCU) technique introduced in ChildsKothariSomma2017. Let

be the reflection operator about the hyperplane orthogonal to

For the block-encoding of H1, first note that

Where H(f)=(1−f)H0+fH1 for H0 and H1 defined in (2). It is proved in AnLin2019 that the gap between 0 and the rest of the eigenvalues of H(f) is lower bounded by 1−f+f/κ. With this bound it is proved that in order to get an ϵ-approximate solution of the QLSP for a positive definite A we need to run for time O(κ/ϵ) using the optimal scheduling (AnLin2019, Theorem 1).

In the gate-based implementation of the time-optimal AQC, we construct HAM-T in Fig. S2. We need to use the block-encodings UH0 and UH1 introduced in the previous section. We denote n0 and n1 as the number of ancilla qubits used in the two block-encodings. We know that n0=1 and n1=n+4. Our construction of HAM-T satisfies

In this unitary HAM-T we also need the unitary

to compute the scheduling function needed in the time-optimal AQC, and the unitaries

Following Corollary 4 of LowWiebe2018, we may analyze the different components of costs in the Hamiltonian simulation of AQC. For time evolution from s=0 to s=1, HAM-T is a (dT,l+n0+n1+2,0)-block-encoding of ∑s|s⟩⟨s|⊗TH(s). With the scheduling function given in AnLin2019 we have ∥TH(s)∥2=O(Td) and ∥d(TH(s))ds∥2=O(dTκp−1). We choose p=1.5 and by Theorem 1 of AnLin2019 we have T=O(κ). We only need to simulate up to constant precision, and therefore we can set l=O(log(dκ)). The costs are then

In order to extend the time-optimal AQC method to Hermitian indefinite matrices, we follow (AnLin2019, Theorem 2), where H0 and H1 are given by

Here σ±=σx±iσy and Q+,b=IN−|+⟩|b⟩⟨+|⟨b|. The dimension of the dilated matrices H0,H1 is 4N. The lower bound for the gap of H(f) then becomes √(1−f)2+f2/κ SubasiSommaOrsucci2019. The initial state is |0⟩|−⟩|b⟩ and the goal is to obtain |0⟩|+⟩|x⟩. After running the AQC we can remove the second qubit by measuring it with respect to the {|+⟩,|−⟩} basis and accepting the result corresponding to |+⟩. The resulting query complexity remains unchanged. We remark that the matrix dilation here is only needed for AQC. The eigenstate filtering procedure can still be applied to the original matrix of dimension 2N.

For a general matrix, we may first consider the extended linear system. Define adjoint QLSP as |y⟩=(A†)−1|b⟩/∥(A†)−1|b⟩∥2, and consider an extended QLSP A|x⟩=|b⟩ in dimension 2N where

Here A is a Hermitian matrix of dimension 2N, with condition number κ and ∥A∥2=1, and |x⟩:=1√2(|1,x⟩+|0,y⟩) solves the extended QLSP. Therefore the time-optimal AQC can be applied to the Hermitian matrix A to prepare an ϵ-approximation of x and y simultaneously. The dimension of the corresponding H0,H1 matrices is 8N. Again the matrix dilation method used in Eq. (S4) is not needed for the eigenstate filtering step.

In this section we prove Lemma 2. We define

This implies (i) of Lemma 2. To prove (ii), we need to use the following lemma: