In this paper, we address the inverse problem, or the statistical machine learning problem, in Markov random fields with a non-parametric pair-wise energy function with continuous variables. The inverse problem is formulated by maximum likelihood estimation. The exact treatment of maximum likelihood estimation is intractable because of two problems: (1) it includes the evaluation of the partition function and (2) it is formulated in the form of functional optimization. We avoid Problem (1) by using Bethe approximation. Bethe approximation is an approximation technique equivalent to the loopy belief propagation. Problem (2) can be solved by using orthonormal function expansion. Orthonormal function expansion can reduce a functional optimization problem to a function optimization problem. Our method can provide an analytic form of the solution of the inverse problem within the framework of Bethe approximation. 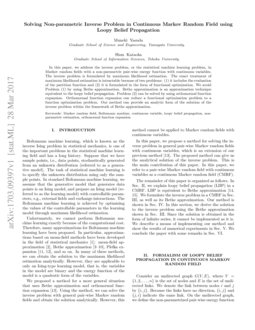 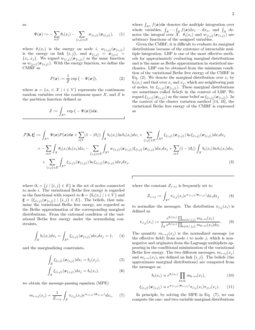 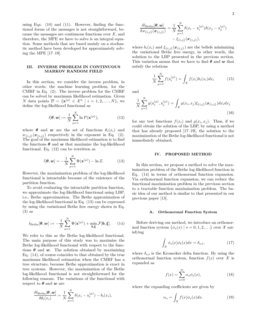 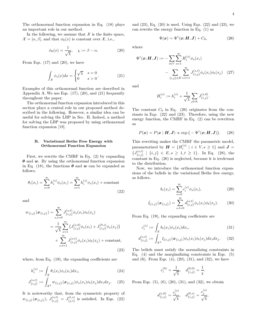 Unfortunately, we cannot perform Boltzmann machine learning exactly because of the computational cost. Therefore, many approximations for Boltzmann machine learning have been proposed. In particular, approximations based on mean-field methods have been developed in the field of statistical mechanics Roudi et al. (2009): mean-field approximation Kappen and Rodríguez (1998), Bethe approximation Parise and Welling (2009); Yasuda and Horiguchi (2006); Yasuda and Tanaka (2009); Mézard and Mora (2009); Marinari and Kerrebroeck (2010); Ricci-Tersenghi (2012); Nguyen and Berg (2012); Furtlehner (2013), Plefka expansion Tanaka (1998); Sessak and Monasson (2009), and so on. In many of these methods, we can obtain the solution to the maximum likelihood estimation analytically. However, they are applicable to only an Ising-type learning model, that is, the variables in the model are binary and the energy function of the model is a quadratic form of the variables.

We proposed a method for a more general situation that uses Bethe approximation and orthonormal function expansion Yasuda et al. (2012). Using the method, we can solve the inverse problem with general pair-wise Markov random fields and obtain the solution analytically. However, this method cannot be applied to Markov random fields with continuous variables.

The remainder of this paper is organized as follows. In Sec. II, we explain loopy belief propagation (LBP) in a CMRF. LBP is equivalent to Bethe approximation Yedidia et al. (2005); Pelizzola (2005). We formulate the inverse problem in a CMRF in Sec. III, as well as its Bethe approximation. Our method is shown in Sec. IV. In this section, we derive the solution to the inverse problem using the Bethe approximation shown in Sec. III. Since the solution is obtained in the form of infinite series, it cannot be implemented as it is. We describe a means of implementing our method and show the results of numerical experiments in Sec. V. We conclude the paper with some remarks in Sec. VI.

\mcalX, and Z is the partition function defined as

Given the CMRF, it is difficult to evaluate its marginal distributions because of the existence of intractable multiple integration. LBP is one of the most effective methods for approximately evaluating marginal distributions and is the same as Bethe approximation in statistical mechanics. LBP can be obtained from the minimum condition of the variational Bethe free energy of the CMRF in Eq. (2). We denote the marginal distribution over xi by bi(xi) and that over xi and xj, which are neighboring pair of nodes, by ξ{i,j}(x{i,j}). These marginal distributions are sometimes called beliefs in the context of LBP. We regard ξ{j,i}(x{i,j}) as the same belief as ξ{i,j}(x{i,j}). In the context of the cluster variation method Kikuchi (1951); Yedidia et al. (2005), the variational Bethe free energy of the CMRF is expressed as

and the marginalizing constraints,

we obtain the message-passing equation (MPE)

where the constant Zi→j is frequently set to

to normalize the messages. The distribution πi∖j(xi) is defined as

The quantity mi→j(xj) is the normalized message (or the effective field) from node i to node j, which is non-negative and originates from the Lagrange multipliers appearing in the conditional minimization of the variational Bethe free energy. The two different messages, mi→j(xj) and mj→i(xi), are defined on link {i,j}. The beliefs (the approximate marginal distributions) are computed from the messages as

In principle, by solving the MPE in Eq. (7), we can compute the one- and two-variable marginal distributions using Eqs. (10) and (11). However, finding the functional forms of the messages is not straightforward, because the messages are continuous functions over \mcalX, and therefore, the MPE we have to solve is an integral equation. Some methods that are based mainly on a stochastic method have been developed for approximately solving the MPE Sudderth et al. (2003); Ihler and McAllester (2009); Noorshams and Wainwright (2013).

where θ and w are the set of functions θi(xi) and w{i,j}(x{i,j}) respectively in the exponent in Eq. (2). The goal of the maximum likelihood estimation is to find the functions θ and w that maximize the log-likelihood functional. Eq. (12) can be rewritten as

However, the maximization problem of the log-likelihood functional is intractable because of the existence of the partition function.

where bi(xi) and ξ{i,j}(x{i,j}) are the beliefs minimizing the variational Bethe free energy, in other words, the solution to the LBP presented in the previous section. This variation means that we have to find θ and w that satisfy the relations

for any test functions f(xi) and g(xi,xj). Thus, if we could obtain the solution of the LBP, by using a method that has already proposed Sudderth et al. (2003); Ihler and McAllester (2009); Noorshams and Wainwright (2013), the solution to the maximization of the Bethe log-likelihood functional is not immediately obtained.

Before deriving our method, we introduce an orthonormal function system {ϕs(x)∣s=0,1,2,…} over \mcalX satisfying

where δs,t is the Kronecker delta function. By using the orthonormal function system, function f(x) over \mcalX is expanded as

where the expanding coefficients are given by

The orthonormal function expansion in Eq. (18) plays an important role in our method.

In the following, we assume that \mcalX is the finite space, \mcalX=[α,β], and that ϕ0(x) is constant over \mcalX, i.e.,

Examples of this orthonormal function are described in Appendix A. We use Eqs. (17), (20), and (21) frequently throughout the paper.

First, we rewrite the CMRF in Eq. (2) by expanding θ and w. By using the orthonormal function expansion in Eq. (18), the functions θ and w can be expanded as follows.

where, from Eq. (19), the expanding coefficients are

This rewriting makes the CMRF the parametric model, parameterized by

Now, we introduce the orthonormal function expansions of the beliefs in the variational Bethe free energy, as follows.

From Eq. (19), the expanding coefficients are

As mentioned above, the beliefs in Eqs. (33) and (34) satisfy the normalization constraints and the marginal constraints for any c and d, so that we can minimize \mcalF(c,d) with no constraint. At the minimum point of \mcalF(c,d), c and d satisfy

By using the new energy function in Eqs. (27) and the variational Bethe free energy in Eq. (35), the Bethe log-likelihood functional in Eq. (14) is represented as

By using the method described above, within the framework of Bethe approximation we can identify the functional form of the energy function through the use of the given N data points, and then obtain the resulting CMRF as

This energy function satisfies the relation

where C1 is the constant unrelated to x (see Appendix B). From the relation and Eq. (42), we obtain the CMRF determined by the Bethe approximation of the MLE as

and obtain the energy function in the form of Eq. (43).

The beliefs, ^bi(xi) and ^ξij(xi,xj), are expressed by an infinite series, as shown in Eqs. (33) and (34). Because an infinite series is not implementable, we approximate them by the truncation up to a finite order: