In this work, we study the propagation of solitons in lossy optical fibers. The main objective of this work is to study the loss of energy of the soliton wave during propagation and then to evaluate the impact of this loss on the transmission of the soliton signal. In this context, a numerical scheme was developed to solve a system of complex partial differential equations (CPDE) that describes the propagation of solitons in optical fibers with loss and nonlinear amplification mechanisms. The numerical procedure is based on the mathematical theory of Taylor series of complex functions. We adapted the Finite Difference Method (FDM) to approximate derivatives of complex functions. Then, we solve the algebraic system resulting from the discretization, implicitly, through the relaxation Gauss-Seidel method (RGSM). The numerical study of CPDE system with linear and cubic attenuation showed that soliton waves undergo attenuation, dispersion, and oscillation effects. On the other hand, we find that by considering the nonlinear term (cubic term) as an optical amplification, it is possible to partially compensate for the attenuation of the optical signal. Finally, we show that a gain of 9 distance of the fundamental soliton wave, when the dissipation rate is 1 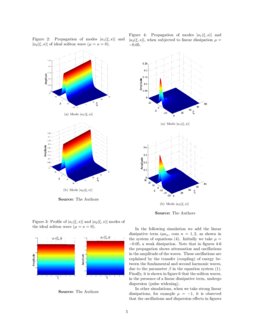 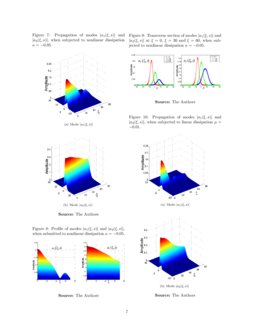 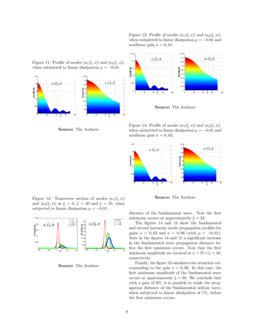 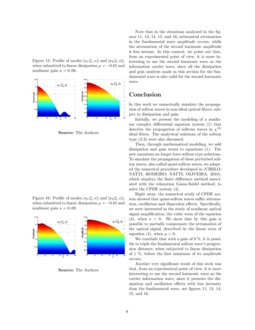 One of the essential activities of the human condition is communication. The exchange of information has become very important for both personal and professional life. This exchange of information can occur analogically or digitally through various means such as coaxial cables, microwave, radio frequencies, infrared and optical fibers. With the Internet access facilitated through cell phones, notebooks and tablets, we see the daily growth of information traffic, which forces communication systems to have greater transmission capacity, high bandwidth, efficiency and speed with no significant energy losses and with low costs.

Among the means of data transmission cited, fiber optic communication systems are the most suitable for these requirements, since they have low attenuation factor, high bandwidth and low production costs. In addition, due to its lightweight, flexible and low volume format, optical fibers have low storage costs. Another important feature of optical fibers is that they have high electrical resistance, which makes them a highly insulating medium, preventing external electromagnetic interference and guaranteeing better transmission quality, with secrecy, among other advantages.

On the other hand, the physical characteristics of optical fibers are very important for preserving the quality of the transmitted signal, so that inomogeneities, diffusion of hydrogen molecules, bubbles, variations in diameter and roughness perturb the propagation of signals, generating noise and loss power. Therefore, in the last decades several experiments have been carried out to compensate the effects of dispersion and nonlinearities in optical communication systems over long distances in order to increase their data transmission capacity. One of the most important innovations in the field of communication technology, able to overcome these difficulties, is based on the concept of optical solitons.

Solitons are optical pulses capable of keeping their shape unaltered in non-linear and dispersive media, such as in optical fibers. The principle of propagation of the solitons in optical fibers is based on the perfect balance between the Group Velocity Dispersion (GVD) and the Kerr effect due to the non-linearity of the medium (TAYLOR, 1992; MENYUK; SCHIEK; TORNER, 1994; AGRAWAL, 2019).

Historically, Smith et al. (1996) showed that solitons could propagate in fibers with periodic variation of the GVD, even if the mean dispersion was practically null, so a new idea emerged for systems with solitons: the systems with managed dispersion. Other experiments were performed by Fukuchi et al. (2001) on mono-channel and WDM systems, aiming to reach transmission capacity above 1 Tb/s. Later, Algety Telecom, based in Lannion, France, made the practical use of solitons a reality when developing submarine telecommunications equipment based on the transmission of optical solitons (ALGETY, 2002).

In this context, this work performs numerical studies describing the propagation of solitons in dielectric optical fibers, with emphasis on the study of power loss and the evaluation of the impact of this dissipation in the transmission of the soliton signal.

where i=√−1 is the imaginary unit, a1(ξ,s) and a2(ξ,s) are complex variables that represent the normalized amplitudes of the electrical fields of the fundamental and second harmonic waves, respectively, with a∗1(ξ,s) as its complex conjugates. The independent variable s has spatial character, and the independent variable ξ has temporal character. The real parameters α, β, δ and r are related with the dielectric properties of the optical fiber (YAMAI; GALLÉAS; NATTI; NATTI, 2004; QUEIROZ; NATTI; ROMEIRO; NATTI, 2006; CIRILO; NATTI; ROMEIRO; TAKANO NATTI, 2008).

The existence of these solutions (YAMAI; GALLÉAS; NATTI; NATTI, 2004) is conditioned by the fact that the hyperbolic secant function argument is real and by the non-existence of singularities in (2) and (3).

It should be observed that the perturbed coupled nonlinear Schrödinger differential equations systems, which describe wave propagation in real optical media, do not present analytical solution. In the literature there are several numerical approaches whose objective is to describe the propagation of perturbed solitons in dielectric environments, most of them using the finite difference method (ISMAIL; ASHI, 2016; OLIVEIRA; NATTI; CIRILO; ROMEIRO; NATTI, 2020) or the finite element method (ISMAIL, 2008; KARCZEWSKA; ROZMEJ; SZCZECINSKI; BOGONIEWICZ, 2016).

In this context, in order to observe the loss of energy caused by these processes in the soliton wave propagation, we add two perturbative terms to equation (Solitons in optical guides), ie,

where iμa1 and iμa2 are linear dissipative terms, while iκ|a1|2a1 and iκ|a2|2a2 are nonlinear dissipative or amplification terms. In this case the propagating wave is not a soliton, and only numerical solutions are possible.

The system (Solitons in optical guides) is numerically resolved in domain ξ×s=[0,T]×[−L,L], where T,L∈R. By discretizing the variables a1(ξ,s)≡a1(k+1,j) and a2(ξ,s)≡a2(k+1,j) for k=0,1,...,kmax and j=1,2,...,ni, where kmax is denominated the last advance in ξ and ni the maximum number of points in s, the propagation domain of the soliton waves is defined by a discretized computational grid of kmax×ni points, as represented in figure 1.

Applying the relaxation Gauss-Seidel Method (CIRILO; NATTI; ROMEIRO; NATTI, 2008), we can compute iteratively a1(k+1,j)n+1 through the equations given below

until the stop criterion is satisfied, ie,

Numerical simulations for solitons with dissipation

In this section, in all the simulations of system (4), we assume for the dielectric parameters the following values: r=−1, β=−0,5, α=−0,25 and δ=−0,1. These values are compatible with those measured in real optical fibers (ARTIGAS, 1999). On discretization, we define Δs=1,0×10−1 and Δξ=1,0×10−3 for the variables s and ξ, respectively. The intervals of variation of s and ξ were adapted to each case, so that the plots of the propagated solitons remained in the computational domain, as represented in the figure 1.

Figure 2 shows the propagation of the modes |a1(ξ,s)| and |a2(ξ,s)| of soliton wave packet under ideal conditions, without dissipative or gain terms, ie, with μ=κ=0.

Note that propagation occurs without variations in wave amplitudes, which can best be observed in figure 3, where the evolution of the amplitudes as a function of the time variable ξ is visualized.

In the following simulation we add the linear dissipative term iμan, com n=1,2, as shown in the system of equations (Solitons in optical guides). Initially we take μ=−0.05, a weak dissipation. Note that in figures 4-6 the propagation shows attenuation and oscillations in the amplitude of the waves. These oscillations are explained by the transfer (coupling) of energy between the fundamental and second harmonic waves, due to the parameter β in the equation system (Solitons in optical guides). Finally, it is shown in figure 6 that the soliton waves, in the presence of a linear dissipative term, undergo dispersion (pulse widening).

In other simulations, when we take strong linear dissipations, for example μ=−1, it is observed that the oscillations and dispersion effects in figures 4-5 disappear, since the intense attenuation factor masks this effect.

In other simulations, unlike in the case of linear dissipation, when we take strong nonlinear dissipations, for example κ=−1, it is observed that the oscillations and dispersion effects in figures 8-9 increase.

Numerical simulations for solitons with dissipation and gain

In this subsection it is considered an optical fiber with linear losses of 1%, that is, μ=−0,01 in equation (Solitons in optical guides). It is also contemplated that in the link there is optical regeneration of the soliton signal through optical amplifiers, for example, erbium doped fiber amplifiers (EDFA), which allows amplifying the optical signal without the need for conversion of the optical-electric-optical signal (AGRAWAL, 2019).

In this context, we simulate the nonlinear properties that an optical fiber must have, so that the gain, given by κ, allows the soliton wave to triple its propagation distance, in relation to the situation in which there is only dissipation μ=−0,01. We consider that the detection threshold at the receiver, due to noise, is 10% of the initial amplitude.

In the first simulation, represented in figures 10 - 12, we consider the soliton wave only with linear dissipation μ=−0,01 (with κ=0). Consistently with the previous results, we observed the attenuation, oscillation and dispersion of the fundamental and second harmonic modes.

Note that in the figure 11, around ξ=28, the fundamental wave amplitude is less than 10% of the initial amplitude. In this configuration the signal is not read by the detector, causing a transmission failure. In this context, we intend to simulate values for gain κ in order to increase the propagated distance of the fundamental and second harmonic waves before this fault occurs.

Below we consider the following gains: 1%, 3%, 6%, and 9%. Considering in the optical fiber a gain of 1% (κ=0,01 with μ=−0,01), it is observed in the figure 13 a small increase of the propagated distance of the fundamental wave. Now the first minimum occurs at approximately ξ=33.

Finally, the figure 16 simulates the situation corresponding to the gain κ=0,09. In this case, the first minimum amplitude of the fundamental wave occurs at approximately ξ=88. We conclude that with a gain of 9%, it is possible to triple the propagation distance of the fundamental soliton wave, when subjected to linear dissipation of 1%, before the first minimum occurs.

In this work we numerically simulate the propagation of soliton waves in non-ideal optical fibers, subject to dissipation and gain.

Initially, we present the modeling of a nonlinear complex differential equation system (Solitons in optical guides) that describe the propagation of solitons waves in χ(2) ideal fibers. The analytical solutions of the soliton type (2-3) were also discussed.

Then, through mathematical modeling, we add dissipation and gain terms to equations (1). The new equations no longer have soliton-type solutions. To simulate the propagation of these perturbed soliton waves, also called quasi-soliton waves, we adapted the numerical procedure developed in (CIRILO; NATTI; ROMEIRO; NATTI; OLIVEIRA, 2010), which employs the finite difference method associated with the relaxation Gauss-Seidel method, to solve the CPDE system (4).

Right away, the numerical study of CPDE system showed that quasi-soliton waves suffer attenuation, oscillation and dispersion effects. Specifically, we were interested in the study of nonlinear optical signal amplification, the cubic term of the equation (4), when κ>0. We show that by this gain is possible to partially compensate the attenuation of the optical signal, described by the linear term of equation (4), when μ<0.

We conclude that with a gain of 9 %, it is possible to triple the fundamental soliton wave’s progression distance, when subjected to linear dissipation of 1 %, before the first minimum of its amplitude occurs.

Another very significant result of this work was that, from an experimental point of view, it is more interesting to use the second harmonic wave as the carrier information wave, since it presents the dissipation and oscillation effects with less intensity than the fundamental wave, see figures 11, 13, 14, 15, and 16.

As a suggestion for future work, we can improve the modeling of the gain and loss mechanisms in the propagation of soliton pulse. What are the intensities and patterns of disturbances caused in the optical pulse due to different gain and loss mechanisms, for example, effects described by cubic terms (LATAS; FERREIRA, 2007) or derivative terms (KOHL; BISWAS; MILOVIC; ZERRAD, 2008)? This study would allow to numerically verify the effect on the signal caused by each mechanism, separately.

The author C. Dall’Agnol thanks the Londrina State University and CAPES for the scholarship granted from March/2012 to February/2014.