Multilingual pre-trained contextual embedding models (Devlin et al., 2019) have achieved impressive performance on zero-shot cross-lingual transfer tasks. Finding the most effective fine-tuning strategy to fine-tune these models on high-resource languages so that it transfers well to the zero-shot languages is a non-trivial task. In this paper, we propose a novel meta-optimizer to soft-select which layers of the pre-trained model to freeze during fine-tuning. We train the meta-optimizer by simulating the zero-shot transfer scenario. Results on cross-lingual natural language inference show that our approach improves over the simple fine-tuning baseline and X-MAML (Nooralahzadeh et al., 2020). 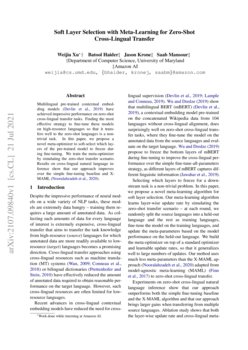 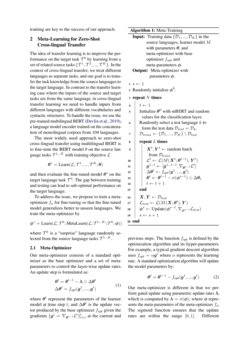 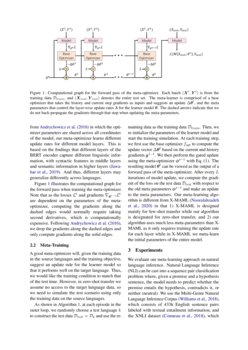 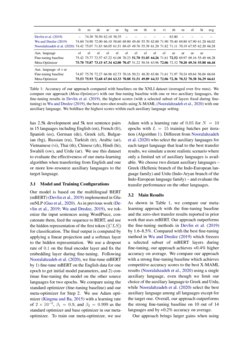 Despite the impressive performance of neural models on a wide variety of NLP tasks, these models are extremely data hungry – training them requires a large amount of annotated data. As collecting such amounts of data for every language of interest is extremely expensive, cross-lingual transfer that aims to transfer the task knowledge from high-resource (source) languages for which annotated data are more readily available to low-resource (target) languages becomes a promising direction. Cross-lingual transfer approaches using cross-lingual resources such as machine translation (MT) systems (Wan, 2009; Conneau et al., 2018) or bilingual dictionaries (Prettenhofer and Stein, 2010) have effectively reduced the amount of annotated data required to obtain reasonable performance on the target language. However, such cross-lingual resources are often limited for low-resource languages.

Recent advances in cross-lingual contextual embedding models have reduced the need for cross-lingual supervision (Devlin et al., 2019; Lample and Conneau, 2019). Wu and Dredze (2019) show that multilingual BERT (mBERT) (Devlin et al., 2019), a contextual embedding model pre-trained on the concatenated Wikipedia data from 104 languages without cross-lingual alignment, does surprisingly well on zero-shot cross-lingual transfer tasks, where they fine-tune the model on the annotated data from the source languages and evaluate on the target language. Wu and Dredze (2019) propose to freeze the bottom layers of mBERT during fine-tuning to improve the cross-lingual performance over the simple fine-tune-all-parameters strategy, as different layers of mBERT captures different linguistic information (Jawahar et al., 2019).

Selecting which layers to freeze for a downstream task is a non-trivial problem. In this paper, we propose a novel meta-learning algorithm for soft layer selection. Our meta-learning algorithm learns layer-wise update rate by simulating the zero-shot transfer scenario – at each round, we randomly split the source languages into a held-out language and the rest as training languages, fine-tune the model on the training languages, and update the meta-parameters based on the model performance on the held-out language. We build the meta-optimizer on top of a standard optimizer and learnable update rates, so that it generalizes well to large numbers of updates. Our method uses much less meta-parameters than the X-MAML approach (Nooralahzadeh et al., 2020) adapted from model-agnostic meta-learning (MAML) (Finn et al., 2017) to zero-shot cross-lingual transfer.

T0 by learning from a set of related source tasks {T1,T2,...,TK}. In the context of cross-lingual transfer, we treat different languages as separate tasks, and our goal is to transfer the task knowledge from the source languages to the target language. In contrast to the transfer learning case where the inputs of the source and target tasks are from the same language, in cross-lingual transfer learning we need to handle inputs from different languages with different vocabularies and syntactic structures. To handle the issue, we use the pre-trained multilingual BERT (Devlin et al., 2019), a language model encoder trained on the concatenation of monolingual corpora from 104 languages.

The most widely used approach to zero-shot cross-lingual transfer using multilingual BERT is to fine-tune the BERT model θ on the source language tasks T1...K with training objective L

To address the issue, we propose to train a meta-optimizer fϕ for fine-tuning so that the fine-tuned model generalizes better to unseen languages. We train the meta-optimizer by

where Tk is a “surprise” language randomly selected from the source language tasks T1...K.

Our meta-optimizer consists of a standard optimizer as the base optimizer and a set of meta-parameters to control the layer-wise update rates. An update step is formulated as:

where θt represent the parameters of the learner model at time step t, and Δθt

is the update vector produced by the base optimizer

Our meta-optimizer is different in that we perform gated update using parametric update rates λ, which is computed by λ=σ(ϕ), where ϕ represents the meta-parameters of the meta-optimizer fϕ

. The sigmoid function ensures that the update rates are within the range

[0,1]. Different from Andrychowicz et al. (2016) in which the optimizer parameters are shared across all coordinates of the model, our meta-optimizer learns different update rates for different model layers. This is based on the findings that different layers of the BERT encoder capture different linguistic information, with syntactic features in middle layers and semantic information in higher layers (Jawahar et al., 2019). And thus, different layers may generalize differently across languages.

As shown in Algorithm 1, at each episode in the outer loop, we randomly choose a test language k to construct the test data Dtest=Dk and use the remaining data as the training data Dtrain. Then, we re-initialize the parameters of the learner model and start the training simulation. At each training step, we first use the base optimizer fopt to compute the update vector Δθt based on the current and history gradients g1...t. We then perform the gated update using the meta-optimizer ϕs−1 with Eq. 1. The resulting model θt can be viewed as the output of a forward pass of the meta-optimizer. After every L iterations of model update, we compute the gradient of the loss on the test data Dtest with respect to the old meta parameters ϕs−1 and make an update to the meta parameters. Our meta-learning algorithm is different from X-MAML (Nooralahzadeh et al., 2020) in that 1) X-MAML is designed mainly for few-shot transfer while our algorithm is designated for zero-shot transfer, and 2) our algorithm uses much less meta-parameters than X-MAML as it only requires training the update rate for each layer while in X-MAML we meta-learn the initial parameters of the entire model.

We evaluate our meta-learning approach on natural language inference. Natural Language Inference (NLI) can be cast into a sequence pair classification problem where, given a premise and a hypothesis sentence, the model needs to predict whether the premise entails the hypothesis, contradicts it, or neither (neutral). We use the Multi-Genre Natural Language Inference Corpus (Williams et al., 2018), which consists of 433k English sentence pairs labeled with textual entailment information, and the XNLI dataset (Conneau et al., 2018), which has 2.5k development and 5k test sentence pairs in 15 languages including English (en), French (fr), Spanish (es), German (de), Greek (el), Bulgarian (bg), Russian (ru), Turkish (tr), Arabic (ar), Vietnamese (vi), Thai (th), Chinese (zh), Hindi (hi), Swahili (sw), and Urdu (ur). We use this dataset to evaluate the effectiveness of our meta-learning algorithm when transferring from English and one or more low-resource auxiliary languages to the target language.

, we tokenize the input sentences using WordPiece, concatenate them, feed the sequence to BERT, and use the hidden representation of the first token (

) for classification. The final output is computed by applying a linear projection and a softmax layer to the hidden representation. We use a dropout rate of

0.1 on the final encoder layer and fix the embedding layer during fine-tuning. Following Nooralahzadeh et al. (2020), we fine-tune mBERT by 1) fine-tune mBERT on the English data for one epoch to get initial model parameters, and 2) continue fine-tuning the model on the other source languages for two epochs. We compare using the standard optimizer (fine-tuning baseline) and our meta-optimizer for Step 2. We use Adam optimizer (Kingma and Ba, 2015) with a learning rate of 2×10−5, β1=0.9, and β2=0.999 as the standard optimizer and base optimizer in our meta-optimizer. To train our meta-optimizer, we use Adam with a learning rate of 0.05 for N=10epochs with L=15 training batches per iteration (Algorithm 1). Different from Nooralahzadeh et al. (2020) who select the auxiliary languages for each target language that lead to the best transfer results, we simulate a more realistic scenario where only a limited set of auxiliary languages is available. We choose two distant auxiliary languages – Greek (Hellenic branch of the Indo-European language family) and Urdu (Indo-Aryan branch of the Indo-European language family) – and evaluate the transfer performance on the other languages.

who show that language models trained on monolingual text from multiple languages provide powerful multilingual representations that generalize across languages. Recent work has shown that more advanced techniques such as freezing the model’s bottom layers

(Wu and Dredze, 2019) or continual learning (Liu et al., 2020) can further boost the cross-lingual performance on downstream tasks. In this paper, we explore meta-learning to softly select the layers to freeze during fine-tuning.

In this paper, we focus on model-based meta-learning for zero-shot cross-lingual transfer. Early work introduces a type of networks that can update their own weights (Schmidhuber, 1987, 1992, 1993). More recently, Andrychowicz et al. (2016) propose to model gradient-based update rules using an RNN and optimize it with gradient descent. However, as Wichrowska et al. (2017) point out, the RNN-based meta-optimizers fail to make progress when run for large numbers of steps. They address the issue by incorporating features motivated by the standard optimizers into the meta-optimizer. We instead base our meta-optimizer on a standard optmizer like Adam so that it generalizes better to large-scale training.

(Wu et al., 2019), low-resource machine translation (Gu et al., 2018), and improving cross-domain generalization for semantic parsing (Wang et al., 2021). For zero-shot cross-lingual transfer, Nooralahzadeh et al. (2020) introduce an optimization-based meta-learning algorithm called X-MAML which meta-learns the initial model parameters on supervised data from low-resource languages. By contrast, our meta-learning algorithm requires much less meta-parameters and is thus simpler than X-MAML. Bansal et al. (2020) show that MAML combined with meta-learning for learning rates improves few-shot learning. Different from their approach which learns layer-wise learning rates only for task-specific layers specified as a hyper-parameter as part of the MAML algorithm, our approach learns layer-wise learning rates for all layers, and we show the effectiveness of our approach without being used with MAML on zero-shot cross-lingual transfer.

We propose a novel meta-optimizer that learns to soft-select which layers to freeze when fine-tuning a pretrained language model (mBERT) for zero-shot cross-lingual transfer. Our meta-optimizer learns the update rate for each layer by simulating the zero-shot transfer scenario where the model fine-tuned on the source languages is tested on an unseen language. Experiments show that our approach outperforms the simple fine-tuning baseline and the X-MAML algorithm on cross-lingual natural language inference.