A major challenge for social event organizers (e.g., event planning companies, venues) is attracting the maximum number of participants, since it has great impact on the success of the event, and, consequently, the expected gains (e.g., revenue, artist/brand publicity). In this paper, we introduce the Social Event Scheduling (SES) problem, which schedules a set of social events considering user preferences and behavior, events' spatiotemporal conflicts, and competing events, in order to maximize the overall number of participants. We show that SES is strongly NP-hard, even in highly restricted instances. To cope with the hardness of the SES problem we design a greedy approximation algorithm. Finally, we evaluate our method experimentally using a real dataset. 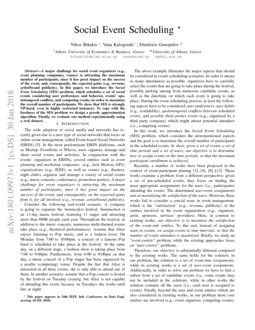 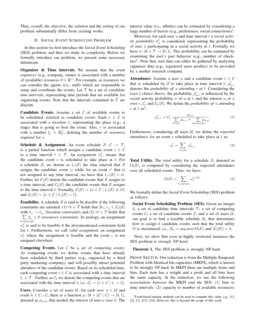 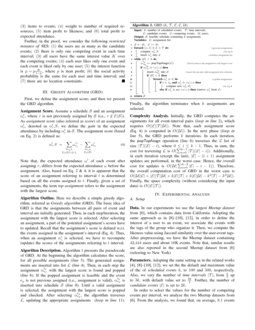 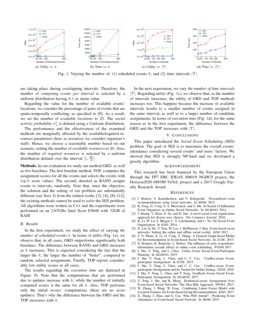 The wide adoption of social media and networks has recently given rise to a new type of social networks that focus on online event management, called Event-based Social Networks (EBSN) [7]. In the most predominant EBSN platforms, such as Meetup, Eventbrite or Whova, users organize, manage and share social events and activities. In conjunction with the events’ organizers in EBSNs, several entities such as event planning and marketing companies (e.g., Jack Morton, GPJ), organizations (e.g., IEEE), as well as venues (e.g., theaters, night clubs), organize and manage a variety of social events (music concerts, conferences, promotion parties). A major challenge for event organizers is attracting the maximum number of participants, since it has great impact on the success of the event, and consequently, on the expected gains from it, for all involved (e.g., revenue, artist/brand publicity).

Consider the following real-world scenario. A company is going to organize the Summerfest festival. Summerfest is an 11-day music festival, featuring 11 stages and attracting more than 800K people each year. Throughout the festival, in addition to the music concerts, numerous multi-themed events take place (e.g., theatrical performances). Assume that Alice enjoys listening to Pop music, and is a fashion lover. On Monday from 7:00 to 10:00pm, a concert of a famous Pop band is scheduled to take place at the festival. At the same day, on a different stage, a fashion show is taking place from 7:00 to 9:00pm. Furthermore, from 6:00 to 8:00pm on that day, a music concert of a Pop singer has been organized by a nearby (competing) venue. Despite the fact that Alice is interested in all three events, she is only able to attend one of them. In another scenario, assume that a Pop concert is hosted by the festival on Tuesday evening, but Alice is not capable of attending this event, because on Tuesdays she works until late at night.

The above example illustrates the major aspects that should be considered in events scheduling scenarios. In order to attract as many attendances as possible, organizers have to carefully select the events that are going to take place during the festival, possibly picking among from numerous candidate events, as well as the date/time on which each event is going to take place. During the event scheduling process, at least the following aspects have to be considered: user preferences, user habits (e.g., availability), spatiotemporal conflicts between scheduled events, and possible third parties events (e.g., organized by a third party company) which might attract potential attendees (i.e., competing events).

In this work, we introduce the Social Event Scheduling (SES) problem, which considers the aforementioned aspects and the goal is to maximize the overall number of participants in the scheduled events. In short, given a set of events, a set of time periods and a set of users, our objective is to determine how to assign events on the time periods, so that the maximum participant enrollment is achieved.

Recently, a number of works have been proposed in the context of event-participant planing [6, 12, 13, 11, 15, 14, 5, 2]. These works examine a problem from a different perspective: given a set of pre-scheduled events, they focus on finding the most appropriate assignments for the users (i.e., participants) attending the events. The determined user-event assignments aim at maximizing the satisfaction of the users. However, these works fail to consider a crucial issue in event management, which is the “satisfaction” (e.g., revenue, publicity) of the entities involved in the event organization (e.g., organizer, artist, sponsors, services’ providers). Here, in contrast to existing works, our objective is to maximize the satisfaction of the event-side entities. To this end, instead of assigning users to events, we assign events to time intervals, so that the number of events’ attendees is maximized. Briefly, we study an “event-centric” problem, while the existing approaches focus on “user-centric” problems.

In this section we first introduce the Social Event Scheduling (SES) problem; and then we study its complexity. Before we formally introduce our problem, we present some necessary definitions.

Organizer & Time intervals. We assume that the event organizer (e.g., company, venue) is associated with a number of (available) resources θ∈R+. For example, as resources we can consider the agents (i.e., staff) which are responsible to setup and coordinate the events. Let T be a set of candidate time intervals, representing time periods that are available for organizing events. Note that the intervals contained in T are disjoint.

Candidate Events. Assume a set E of available events to be scheduled, referred as candidate events. Each e∈E is associated with a location ℓe representing the place (e.g., a stage) that is going to host the event. Further, each event e requires a specific amount of resources ξe∈R+0 for its organization, referred as required resources.

Users. Consider a set of users U, for each user u∈U and event h∈E∪C, there is a function μ:U×(E∪C)→[0,1], denoted as μu,h, that models the interest of user u over h

. The interest value (i.e., affinity) can be estimated by considering a large number of factors (e.g., preferences, social connections)

Moreover, for each user u and time interval t a social activity probability σtu

is considered, representing the probability of user

u participating in a social activity at t. Formally we have σ:U×T→[0,1]. This probability can be estimated by examining the user’s past behavior (e.g., number of check-ins)???. Note that, user data can either be gathered by analyzing organizer data (e.g., registered users profiles) or be provided by a market research company.

Furthermore, considering all users U, we define the expected attendance for an event e scheduled to take place at t as:

Total Utility. The total utility for a schedule S, denoted as Ω(S), is computed by considering the expected attendance over all scheduled events. Thus, we have:

Next, we show that even in highly restricted instances the SES problem is strongly NP-hard.

Proof Sketch. Our reduction is from the Multiple Knapsack Problem with Identical bin capacities (MKPI), which is known to be strongly NP-hard [8]. In MKPI there are multiple items and bins. Each item has a weight and a profit and all bins have the same capacity. In the reduction, we use the following associations between the MKPI and the SES: (1) bins to time intervals; (2) capacity to number of available resources; (3) items to events; (4) weight to number of required resources; (5) item profit to likeness; and (6) total profit to expected attendance. Further, in the proof, we consider the following restricted instance of SES: (1) the users are as many as the candidate events; (2) there is only one competing event in each time interval; (3) all users have the same interest value K over the competing events; (4) each user likes only one event and each event is liked only by one user; (5) the interest function is μ=pK1−p, where p is item profit; (6) the social activity probability is the same for each user and time interval; and (7) there are no location constraints. ■

First, we define the assignment score; and then we present the GRD algorithm.

Data. In our experiments we use the largest Meetup dataset from [9], which contains data from California. Adopting the same approach as in [11, 12, 13, 15], in order to define the interest of a user to an event, we associate the events with the tags of the group who organize it. Then, we compute the likeness value using Jaccard similarity over the user-event tags. After preprocessing, we have the Meetup dataset containing 42,444 users and about 16K events.

is selected by a uniform distribution having

The performance and the effectiveness of the examined methods are marginally affected by the available/required resources parameters (here as resources we consider organizer’s staff). Hence, we choose a reasonable number based on our scenario, setting the number of available resources to 20. Also, the number of required resources is selected by a uniform distribution defined over the interval [1,203].

Methods. In our evaluation we study our method GRD, as well as two baselines. The first baseline method, TOP, computes the assignment scores for all the events and selects the events with top-k score values. The second, denoted as RAND assigns events to intervals, randomly. Note that, since the objective, the solution and the setting of our problem are substantially different (see Sect. I) from the related works [6, 12, 13, 11, 15, 14, 5, 2], the existing methods cannot be used to solve the SES problem. All algorithms were written in C++ and the experiments were performed on an 2.67GHz Intel Xeon E5640 with 32GB of RAM.

In the first experiment, we study the effect of varying the number of scheduled events k. In terms of utility (Fig. (a)a), we observe that, in all cases, GRD outperforms significantly both baselines. The difference between RAND and GRD increases as k increases. This is expected considering the fact that the larger the k, the larger the number of “better”, compared to random, selected assignments. Finally, TOP reports considerably low utility scores in all cases.

The results regarding the execution time are depicted in Figure (b)b. Note that the computations that are performed due to updates increase with k, while the number of initially computed scores is the same for all k. Also, TOP performs only the initial scores’ computations (there are no score updates). That’s why the difference between the GRD and the TOP increases with k.

In the next experiment, we vary the number of time intervals |T|. Regarding utility (Fig. (c)c), we observe that, as the number of intervals increases, the utility of GRD and TOP methods increases too. This happens because the increase of available intervals results to a smaller number of events assigned in the same interval, as well as to a larger number of candidate assignments. In terms of execution time (Fig. (d)d), for the same reason as in the first experiment, the difference between the GRD and the TOP increases with |T|.

This paper introduced the Social Event Scheduling (SES) problem. The goal of SES is to maximize the overall events’ attendance considering several events’ and users’ factors. We showed that SES is strongly NP-hard and we developed a greedy algorithm.

This research has been financed by the European Union through the FP7 ERC IDEAS 308019 NGHCS project, the Horizon2020 688380 VaVeL project and a 2017 Google Faculty Research Award.