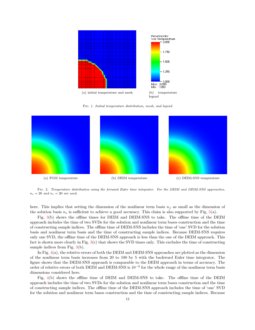 In many areas of engineering, nonlinear numerical analysis is playing an...
Thomas Simpson, et al. ∙

We consider projection-based ROMs for nonlinear dynamical systems. Such ROMs include the Empirical Interpolation method (EIM)

and the Gauss–Newton with Approximated Tensors

[15]. The cubature methods, in contrast, takes a different approach. They approximate nonlinear integral as a finite sum of positive scalar weights multiplied by the integrand evaluated at sampled elements. The cubature methods developed in [3, farhat2014dimensional, 17] do not require building nonlinear term basis. They solve the Non-Negative Least-Squares (NNLS) problem directly with the nonlinear term snapshots. Recently, Hernandez, et al., in [19] developed the Empirical Cubature Method (ECM) approach that builds nonlinear term basis to solve a smaller NNLS problem. The requirement of building nonlinear term basis in hyper-reduction results in computational cost and storage in addition to solution basis construction. The cost is significant if the corresponding Full Order Models (FOMs) are large-scale. The large-scale problem requires large additional storage for nonlinear term snapshots and large-scale compression techniques to build a basis. In particular, the cost of the hyper-reduction in the recently-developed space–time ROM (i.e., ST-GNAT) [12] is even more significant than aforementioned spatial ROMs (e.g., EIM, DEIM, GNAT, BPIM, MPE, and ECM). The best nonlinear term snapshots of the ST-GNAT method are obtained from the corresponding space–time ROMs without hyper-reduction (i.e., ST-LSPG) [12], which is not practical for a large-scale problem due to the cumbersome size.111

The full size, implicitly handled by the ST-LSPG approach due to the nonlinear term and corresponding Jacobian updates, is the FOM spatial degrees of freedom multiplied by the number of time steps.

Therefore, a novel and efficient way of constructing nonlinear term basis needs to be developed.

1.1 Organization of the paper

The cardinality of a subspace, A, is denoted as |A|. The Kronecker product of two matrices A∈RI×J and B∈RK×L is denoted by A⊗B∈RIK×JL and is defined as

A parameterized nonlinear dynamical system is considered, characterized by a system of nonlinear ordinary differential equations (ODEs), which can be considered as a resultant system from semi-discretization of Partial Differential Equations (PDEs) in space domains

where M∈RNs×Ns denotes a nonsingular matrix, t∈[0,T] denotes time with the final time T∈R+, and x(t;μ) denotes the time-dependent, parameterized state implicitly defined as the solution to problem (3.1) with x:[0,T]×D→RNs. Further, f:RNs×[0,T]×D→RNs with (w,τ;ν)↦f(w,τ;ν) denotes the scaled velocity of Mx, which we assume to be nonlinear in at least its first argument. The initial state is denoted by x0:D→RNs, and μ∈D denotes the parameters with parameter domain D⊆Rnμ.

By induction, we conclude the following subspace inclusion relation:

which shows that the span of nonlinear term snapshots is included in the span of M-scaled solution snapshots. The residual function with the forward Euler time integrator is defined as

The implicit Backward Euler (BE) method numerically solves Eq. (3.1), by solving the following nonlinear system of equations for xn at n-th time step:

By induction, we conclude the following subspace inclusion relation:

which shows that the span of nonlinear term snapshots is included in the span of M-scaled solution snapshots. The residual function with the backward Euler time integrator is defined as

Projection-based reduced order models are considered for nonlinear dynamical systems. Especially, the ones that require building a nonlinear term basis are of our interest: the DEIM, GNAT, and ST-GNAT approaches.

The DEIM approach applies spatial projection using a subspace S:=span{ϕi}nsi=1⊆RNs with dim(S)=ns≪Ns. Using this subspace, it approximates the solution as x≈~x∈x0+S (i.e., in a trial subspace) or equivalently

where Φ:=[ϕ1⋯ϕns]∈RNs×ns denotes a basis matrix and ^x∈Rns with ^x0=0 denotes the generalized coordinates. Replacing x with ~x in Eq. (3.1) leads to the following system of equations with reduced number of unknowns:

from a truncated Singular Value Decomposition (SVD) approximation to a FOM solution snapshot matrix. It is related to principal component analysis in statistical analysis

where U∈RNs×Nt and V∈RNt×Nt are orthonormal matrices and Σ∈RNt×Nt is a diagonal matrix with singular values on its diagonals. Then POD chooses the leading ns columns of U to set Φ (i.e., Φ=U(:,1:ns) in MATLAB notation). The POD basis minimizes ∥X−ΦΦTX∥2 over all Φ∈RNs×ns with orthonormal columns. Since the objective function does not change if Φ is post-multiplied by an arbitrary ns×nsorthogonal matrix, the POD procedure seeks the optimal ns–-dimensional subspace that captures the snapshots in the least-squares sense. For more details on POD, we refer to [20, 23].

Note that Eq. (4.2) has more equations than unknowns (i.e., an overdetermined system). It is likely that there is no solution satisfying Eq. (4.2). In order to close the system, the Galerkin projection solves the following reduced system:

Applying a time integrator to Eq. (4.4) leads to a reduced OΔE. Note that the reduced OΔE has ns unknowns and ns equations. If an implicit time integrator is applied, a Newton–type method can be applied to solve for unknown generalized coordinates each time step. If an explicit time integrator is applied, time marching updates will solve the system. However, we cannot expect any speedup because the size of the nonlinear term f and its Jacobian, which need to be updated for every Newton step, scales with the FOM size. Thus, to overcome this issue, the DEIM approach applies a hyper-reduction technique. That is, it projects f onto a subspace F:=span{ϕf,i}nfi=1 and approximates f as

where Z:=[ep1,…,epnf]T∈Rnf×Ns is the sampling matrix and epi is the pi

th column of the identity matrix

or a column pivoted QR decomposition

[14] and corresponding rows of Φf and f. This enables DEIM to achieve a speedup when it is applied to nonlinear problems.

The basis matrix Φ can be found by the POD as in the DEIM approach. Note that Eq. (4.8) is an over-determined system. To close the system and solve for the unknown generalized coordinates, ^xn, the LSPG ROM takes the square norm of the residual vector function and minimize it at every time step:

where Z:=[ep1,…,epnz]T∈Rnz×Ns, ns≤nr≤nz≪Ns, is the sampling matrix and epi is the pith column of the identity matrix INs∈RNs×Ns. The solution to Eq. (4.11) is given as

The GNAT method does not construct the sampling matrix Z. Instead, it maintains the sampling indices {p1,…,pnf} and corresponding rows of Φr and r. This enables GNAT to achieve a speedup when it is applied to nonlinear problems.

Finally, the GNAT method minimizes the following least-squares problem at every time step, for example, with the backward Euler time integrator:

The GNAT method applies another POD to a nonlinear residual term snapshots to construct Φr. The original GNAT paper [10] collects residual snapshots at every Newton iteration from the LSPG simulations555We denote the LSPG simulation to be the ROM simulation without hyper-reduction. That is, LSPG solves Eq. (4.9) without any hyper-reduction if the backward Euler time integrator is used. for several reasons:

Some disadvantages of the original GNAT approach include:

Section 5 discusses how to avoid the collection of nonlinear term snapshots and the extra SVD without losing the quality of the hyper-reduction.

Note that ¯x(μ) denotes the parameterized space–time state implicitly defined as the solution to the problem (4.15) with ¯x:D→RNsNt and ¯x(μ)∈RNsNt. Further, ¯f(¯x;μ)∈RNsNt denotes the space–time nonlinear term that is nonlinear in at least its first argument with ¯f:RNsNt×D→RNsNt. The space–time residual function ¯r∈RNsNt corresponding to Eq. (4.15) is defined as

To reduce both the spatial and temporal dimensions of the full-order model, the ST-LSPG method enforces the approximated numerical solution ~y∈RNsNt to reside in an affine ‘space–time trial subspace’

where ST:=1Nt⊗x0(μ)+span{¯ϕi}nsti=1⊆RNsNt with dim(ST)=nst≪NsNt and 1Nt∈RNt whose elements are all one. Further, ¯ϕi∈RNsNt denotes a space–time basis vector. Thus, the ST-LSPG method approximates the numerical solution as

The ST-HOSVD method is a more efficient version of T-HOSVD. Thus, we will not consider T-HOSVD. The tailored temporal subspace via ST-HOSVD has a LL1 form that has appeared, for example, in [30, 13]. Therefore, we will refer to it as the LL1 decomposition.

Because of the reduction in spatial and temporal dimension, the space–time residual vector ¯r cannot achieve zero most likely. Thus, the ST-LSPG method minimizes the square norm of ¯r and computes the ST-LSPG solution:

where ¯Z:=[ep1,…,epnz]T∈Rnz×NsNt, nst≤nr≤nz≪NsNt, is the sampling matrix and epi is the pith column of the identity matrix INsNt∈RNsNt×NsNt. The solution to Eq. (4.25) is given by

The ST-GNAT method does not construct the sampling matrix Z. Instead, it maintains the sampling indices {p1,…,pnf} and corresponding rows of ¯Φr and ¯r. This enables the ST-GNAT to achieve a speedup when it is applied to nonlinear problems.

Finally, the ST-GNAT solves the following least-squares problem at every time step, for example, with the backward Euler time integrator:

Eq. (5.1) is an over-determined system, so it is likely that it will not have a solution. However, if there is a solution, then a necessary condition for Eq. (5.1) to have a non-trivial solution is that

The obvious advantage of the DEIM-SNS approach over DEIM is that no additional SVD or eigenvalue decomposition is required, which can save the computational cost of the offline phase.

Therefore, we propose the following bases of the space–time nonlinear residual term:

In addition to the choices above, we propose the following two choices for the special case of M being an identity matrix: