Use of social media has grown dramatically during the last few years. Users follow informal languages in communicating through social media. The language of communication is often mixed in nature, where people transcribe their regional language with English and this technique is found to be extremely popular. Natural language processing (NLP) aims to infer the information from these text where Part-of-Speech (PoS) tagging plays an important role in getting the prosody of the written text. For the task of PoS tagging on Code-Mixed Indian Social Media Text, we develop a supervised system based on Conditional Random Field classifier. In order to tackle the problem effectively, we have focused on extracting rich linguistic features. We participate in three different language pairs, ie. English-Hindi, English-Bengali and English-Telugu on three different social media platforms, Twitter, Facebook & WhatsApp. The proposed system is able to successfully assign coarse as well as fine-grained PoS tag labels for a given a code-mixed sentence. Experiments show that our system is quite generic that shows encouraging performance levels on all the three language pairs in all the domains. 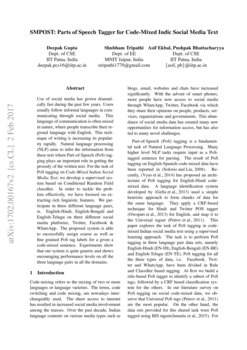 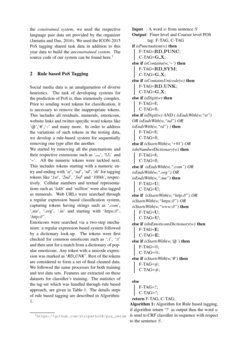 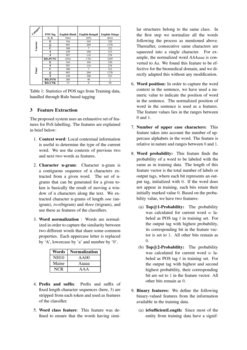 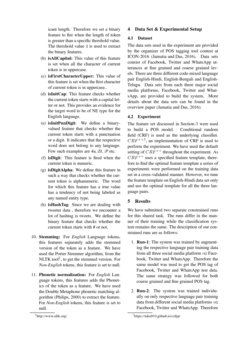 Code-mixing refers to the mixing of two or more languages or language varieties. The terms, code switching and code mixing, are nowadays interchangeably used. The sheer access to internet has resulted in increased social media involvement among the masses. Over the past decade, Indian language contents on various media types such as blogs, email, websites and chats have increased significantly. With the advent of smart phones, more people have now access to social media through WhatsApp, Twitter, Facebook via which they share their opinions on people, products, services, organizations and governments. This abundance of social media data has created many new opportunities for information access, but has also led to many novel challenges.

Part-of-Speech (PoS) tagging is a fundamental task of Natural Language Processing. Many higher level NLP tasks require input as a PoS-tagged sentence for parsing. The result of PoS tagging on English-Spanish code-mixed data have been reported in [Solorio and Liu2008]. Recently, [Vyas et al.2014] has proposed an architecture of PoS tagging for English-Hindi code-mixed data. A language identification system developed by [Gella et al.2013]

used a simple heuristic approach to form chunks of data for the same language. They apply a CRF-based technique for Hindi and Twitter POS tagger

. This paper explores the task of PoS tagging in code-mixed Indian social media text using a supervised learning approach. The task is to perform PoS tagging in three language pair data sets, namely English-Hindi (EN-HI), English-Bengali (EN-BE) and English-Telugu (EN-TE). PoS tagging for all the three types of data, i.e. Facebook, Twitter and WhatsApp, have been divided in Rule and Classifier based tagging. At first we build a rule-based PoS tagger to identify a subset of PoS tags, followed by a CRF based classification system for the others. In our literature survey on PoS tagging on social code-mixed data, we observe that Universal PoS tags

[Petrov et al.2011] are the most popular. On the other hand, the data sets provided for this shared task were PoS tagged using BIS tagset[Jamatia et al.2015]. For the constrained system, we used the respective language pair data set provided by the organizer [Jamatia and Das2016]. We used the ICON-2015 PoS tagging shared task data in addition to this year data to build the unconstrained system. The source code of our system can be found here.111https://github.com/stripathi08/pos_cmism

Social media data is an amalgamation of diverse heuristics. The task of developing systems for the prediction of PoS is, thus immensely complex. Prior to sending word tokens for classification, it is necessary to remove the inappropriate tokens. This includes all residuals, numerals, emoticons, website links and twitter-specific word tokens like ‘@’,‘#’,‘~’ and many more. In order to address the variations of such tokens in the testing data, we develop a rule-based system for sequentially removing one type after the another.

We started by removing all the punctuations and their respective extensions such as ‘….’, ‘!.!.’ and ‘~’. All the numeric tokens were tackled next. This includes tokens starting with a numeric entry and ending with ‘st’, ‘nd’, ‘rd’, ‘th’ for tagging tokens like ‘1st’, ‘2nd’, ‘3rd’ and ‘100th’, respectively. Cellular numbers and textual representations such as ‘lakh’ and ‘million’ were also tagged as numerals. Web URLs were searched through a regular expression based classification system, capturing tokens having strings such as ‘.com’, ‘.me’, ‘.org’, ‘.in’ and starting with ‘https://’, ‘http://’. Emoticons were searched via a two-step mechanism: a regular expression based system followed by a dictionary look-up. The tokens were first checked for common emoticons such as ‘:)’, ‘:(’ and then sent for a match from a dictionary of popular emoticons. Any token with a unicode expression was marked as ‘RD_UNK’. Rest of the tokens are considered to form a set of final cleaned data. We followed the same processes for both training and test data sets. Features are extracted on these datasets for classifier’s training. The statistics of the tag-set which was handled through rule based approach, are given in Table-1. The details steps of rule based tagging are described in Algorithm-1.

The proposed system uses an exhaustive set of features for PoS labelling. The features are explained in brief below:

The data sets used in the experiment are provided by the organizer of POS tagging tool contest at ICON-2016 [Jamatia and Das2016]. Data sets consist of Facebook, Twitter and WhatsApp utterances at fine grained and coarse grained levels. There are three different code-mixed language pair English-Hindi, English-Bengali and English-Telugu. Data sets from each three major social media platforms, Facebook, Twitter and WhatsApp, are provided to build the system. More details about the data sets can be found in the overview paper [Jamatia and Das2016].

The feature set discussed in Section-3 were used to build a POS model. Conditional random field (CRF) is used as the underlying classifier. CRF++333https://taku910.github.io/crfpp/, an implementation of CRF is used to perform the experiment. We have used the default setting of CRF++ throughout the experiment. As CRF++ uses a specified feature template, therefore to find the optimal feature template a series of experiments were performed on the training data set in a cross-validated manner. However, we tune the feature template on English-Hindi data set only and use the optimal template for all the three language pairs.

We have submitted two separate constrained runs for this shared task. The runs differ in the manner of their training while the classification system remains the same. The description of our constrained runs are as follows:

The detailed results of both the runs on finer and coarse grained POS tagging are shown in Table-2 and Table-3. The unconstrained system is an extension of Run-1 of constrained system along with previous year’s data. We have combined the respective language pair training data from previous year’s task and this year’s task. While cross-validating to find the optimal system performance, we could not observe a significant increase in the performance. It is observed from the results of both the constrained runs that, in general, Run-1 performed better in WhatsApp domain among all the language pairs in the finer as well as coarser grained tag set. Similarly, Run-1 performed better in Twitter domain too, except for the Bengali-English language pair. Conversely, Run-2 performed better in Facebook domain among all the language pairs in both the tag sets.

This paper describes the approach for Parts of Speech tagging at finer and coarser level on Bengali-English, Hindi-English and Telugu-English language pairs code-mixed data. The system performed exceptionally well in all the domains for finer and coarser tag set, barring the Telugu Twitter Constrained Run-2 on Coarse grained tag set. We are working on the application of Deep Neural Networks in the task of POS tagging on code-mix environment. A lack of labeled data has been the major cause for poor results when applying Recurrent Neural Networks and Long-Short Term Memory (LSTM) models for the classification task. We are currently working on combining a CRF based classifier system and a Bi-Directional LSTM (BLSTM) model for improving the results on code-mixed data sets.