Testing procedures for assessing specific parametric model forms, or for checking the plausibility of simplifying assumptions, play a central role in the mathematical treatment of the uncertain. No certain answers are obtained by testing methods, but at least the uncertainty of these answers is properly quantified. This is the case for tests designed on the two most general data generating mechanisms in practice: distribution/density and regression models. Testing proposals are usually formulated on the Euclidean space, but important challenges arise in non-Euclidean settings, such as when directional variables (i.e., random vectors on the hypersphere) are involved. This work reviews some of the smoothing-based testing procedures for density and regression models that comprise directional variables. The asymptotic distributions of the revised proposals are presented, jointly with some numerical illustrations justifying the need of employing resampling mechanisms for effective test calibration. 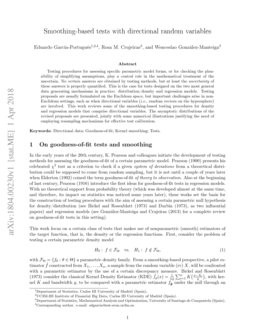 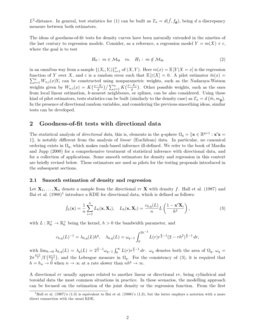 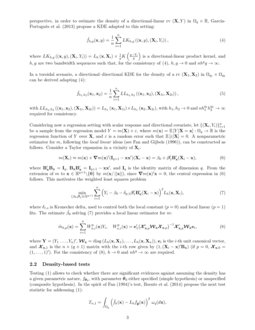 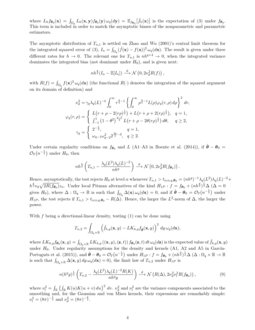 In this paper, we consider the problem of testing for exponentiality aga...
Mansi Garg, et al. ∙

A New Look at F-Tests

1 On goodness-of-fit tests and smoothing

In the early years of the 20th century, K. Pearson and colleagues initiate the development of testing methods for assessing the goodness-of-fit of a certain parametric model. Pearson (1900) presents his celebrated χ2 test as a criterion to check if a given system of deviations from a theoretical distribution could be supposed to come from random sampling, but it is not until a couple of years later when Elderton (1902) coined the term goodness-of-fit of theory to observation. Also at the beginning of last century, Pearson (1916)

introduce the first ideas for goodness-of-fit tests in regression models. With no theoretical support from probability theory (which was developed almost at the same time, and therefore, its impact on statistics was noticed some years later), these works set the basis for the construction of testing procedures with the aim of assessing a certain parametric null hypothesis for density/distribution (see

Bickel and Rosenblatt (1973) and Durbin (1973), as two influential papers) and regression models (see González-Manteiga and Crujeiras (2013) for a complete review on goodness-of-fit tests in this setting).

This work focus on a certain class of tests that makes use of nonparametric (smooth) estimators of the target function, that is, the density or the regression functions. First, consider the problem of testing a certain parametric density model

with FΘ={fθ:θ∈Θ} a parametric density family. From a smoothing-based perspective, a pilot estimator ^f constructed from X1,…,Xn, a sample from the random variable (rv) X, will be confronted with a parametric estimator by the use of a certain discrepancy measure. Bickel and Rosenblatt (1973)

^fg(x)=1ng∑ni=1K(x−Xig), with kernel K and bandwidth g, to be compared with a parametric estimator f^θ under the null through an L2

-distance. In general, test statistics for (

1) can be built as Tn=d(^f,f^θ), being d a discrepancy measure between both estimators.

The ideas of goodness-of-fit tests for density curves have been naturally extended in the nineties of the last century to regression models. Consider, as a reference, a regression model Y=m(X)+ε, where the goal is to test

in an omnibus way from a sample {(Xi,Yi)}ni=1 of (X,Y). Here m(x)=E[Y|X=x] is the regression function of Y over X, and ε is a random error such that E[ε|X]=0. A pilot estimator ^m(x)=∑ni=1Wn,i(x)Yi can be constructed using nonparametric weights, such as the Nadaraya-Watson weights given by Wn,i(x)=K(x−Xig)/∑nj=1K(x−Xjg). Other possible weights, such as the ones from local linear estimation, k-nearest neighbours, or splines, can be also considered. Using these kind of pilot estimators, tests statistics can be built (similarly to the density case) as Tn=d(^m,m^θ). In the presence of directional random variables, and considering the previous smoothing ideas, similar tests can be developed.

The statistical analysis of directional data, this is, elements in the q-sphere Ωq={x∈Rq+1:x′x=1}, is notably different from the analysis of linear (Euclidean) data. In particular, no canonical ordering exists in Ωq, which makes rank-based inference ill-defined. We refer to the book of Mardia and Jupp (2000) for a comprehensive treatment of statistical inference with directional data, and for a collection of applications. Some smooth estimators for density and regression in this context are briefly revised below. These estimators are used as pilots for the testing proposals introduced in the subsequent sections.

2.1 Smooth estimation of density and regression

with L:R+0→R+0 being the kernel, h>0 the bandwidth parameter, and

A directional rv usually appears related to another linear or directional rv, being cylindrical and toroidal data the most common situations in practice. In these scenarios, the modelling approach can be focused on the estimation of the joint density or the regression function. From the first perspective, in order to estimate the density of a directional-linear rv (X,Y) in Ωq×R, García-Portugués et al. (2013) propose a KDE adapted to this setting:

In a toroidal scenario, a directional–directional KDE for the density of a rv (X1,X2) in Ωq1×Ωq2 can be derived adapting (4):

Considering now a regression setting with scalar response and directional covariate, let {(Xi,Yi)}ni=1 be a sample from the regression model Y=m(X)+ε, where m(x)=E[Y|X=x]:Ωq→R is the regression function of Y over X, and ε is a random error such that E[ε|X]=0. A nonparametric estimator for m, following the local linear ideas (see Fan and Gijbels (1996)), can be constructed as follows. Consider a Taylor expansion in a vicinity of Xi:

is the identity matrix of dimension

where δr,s is Kronecker delta, used to control both the local constant (p=0) and local linear (p=1) fits. The estimate ^β0 solving (7) provides a local linear estimator for m:

Testing (1) allows to check whether there are significant evidences against assuming the density has a given parametric nature, fθ0, with parameter θ0 either specified (simple hypothesis) or unspecified (composite hypothesis). In the spirit of Fan (1994)’s test, Boente et al. (2014) propose the next test statistic for addressing (1):

where is the expectation of (3) under fθ0. This term is included in order to match the asymptotic biases of the nonparametric and parametric estimators.

The asymptotic distribution of Tn,1 is settled on Zhao and Wu (2001)

’s central limit theorem for the integrated squared error of (

With f being a directional-linear density, testing (1) can be done using

where ν2l=∫R{∫RK(u)K(u+v)du}2dv. ν2d and ν2l are the variance components associated to the smoothing and, for the Gaussian and von Mises kernels, their expressions are remarkably simple: ν2l=(8π)−12 and ν2d=(8π)−q2.

Estimator (4) allows also to check the independence between the rv’s X and Y in an omnibus way, for arbitrary dimensions. This degree of generality contrasts with the available tests for assessing the independence between directional and linear variables, mostly focused on the circular case and on the examination of association coefficients (e.g. Mardia (1976), Liddell and Ord (1978), and Fisher and Lee (1981)). Independence can be tested à la Rosenblatt (1975) by considering the problem

where fX,Y is the joint directional-linear density, and fX and fY are the marginals. To that aim, García-Portugués et al. (2014) propose the statistic

Under the same conditions on the density and kernels required for (9), and with the additional bandwidths’ bond hqg−1→c, 0<c<∞, the asymptotic distribution of Tn,2 under independence is

The testing of (2) (i.e., the assessment of whether m has a parametric structure mθ0, with θ0 either specified or unspecified) is rooted on the nonparametric estimator for m introduced in (8). In a similar way to Härdle and Mammen (1993) in the linear setting, problem (2) may be approached with the test statistic

where Lh,pmθ0(x)=∑ni=1Wpn,i(x)mθ0(Xi) is the smoothing of mθ0, included to reduce the asymptotic bias (Härdle and Mammen, 1993), and w:Ωq→R+0 is an optional weight function. The inclusion of ^fh has the benefits of avoiding the presence of the density of X in the asymptotic bias and variance, and of mitigating the effects of the squared difference in sparse areas of X.

3 Convergence towards the asymptotic distribution

Second, for Tn,6, the regression model Y=1+ε is considered, with ε∼N(0,14), and Xuniformly distributed on the circle. The composite hypothesis is H0:m≡c, for c∈R unknown. H0 is checked using the local constant estimator with von Mises kernel and w≡1. Figure 2 shows the QQ-plots computed from the sample {nh12(128π)14(Tjn−√π4nh)}Mj=1, for the bandwidth sequences hn=n−r2, r=13,15, which were chosen in order to illustrate their impact in the convergence to the asymptotic distribution. Specifically, it can be seen that the effect of undersmoothing boosts the convergence since the bias is mitigated. Again, up to large sample sizes, the degree of disagreement between the finite sample and the asymptotic distributions is quite evident.

The authors acknowledge the support of project MTM2016-76969-P from the Spanish State Research Agency (AEI), Spanish Ministry of Economy, Industry and Competitiveness, and European Regional Development Fund (ERDF). We also thank Eduardo Gil, Juan J. Gil, and María Angeles Gil for inviting us to contribute to this volume, in memory of Pedro.