The Maximal points in a set S are those that aren't dominated by any other point in S. Such points arise in multiple application settings in which they are called by a variety of different names, e.g., maxima, Pareto optimums, skylines. Because of their ubiquity, there is a large literature on the expected number of maxima in a set S of n points chosen IID from some distribution. Most such results assume that the underlying distribution is uniform over some spatial region and strongly use this uniformity in their analysis. This work was initially motivated by the question of how this expected number changes if the input distribution is perturbed by random noise. More specifically, let Ballp denote the uniform distribution from the 2-d unit Lp ball, delta Ballq denote the 2-d Lq-ball, of radius delta and Ballpq be the convolution of the two distributions, i.e., a point v in Ballp is reported with an error chosen from delta Ballq. The question is how the expected number of maxima change as a function of delta. Although the original motivation is for small delta the problem is well defined for any delta and our analysis treats the general case. More specifically, we study, as a function of n,δ, the expected number of maximal points when the n points in S are chosen IID from distributions of the type Ballpq where p,q in 1,2,infty for delta > 0 and also of the type Ballp infty-q, where q in [1,infty) for delta > 0. 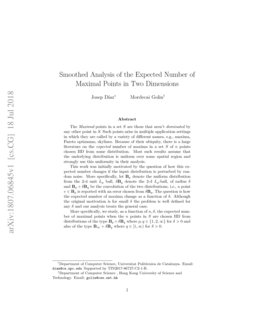 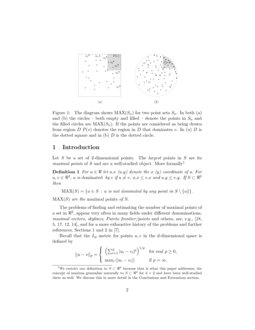 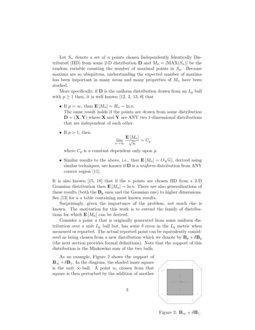 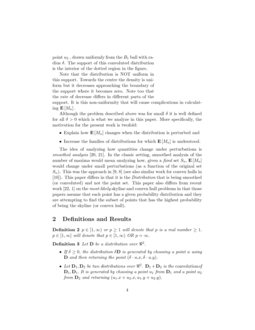 Let S be a set of 2-dimensional points. The largest points in S are its maximal points of S and are a well-studied object. More formally111We restrict our definition to S⊂R2 because that is what this paper addresses; the concept of maxima generalize naturally to S⊂Rd for d>2 and have been well-studied there as well. We discuss this in more detail in the Conclusions and Extensions section.

\rm MAX(S) are the maximal points of S.

R2, appear very often in many fields under different denominations,

Recall that the Lp metric for points u,v in the d-dimensional space is defined by

be the random variable counting the number of maximal points in

Sn. Because maxima are so ubiquitous, understanding the expected number of maxima has been important in many areas and many properties of Mn have been studied.

E[Mn]∼lnn. There are also generalizations of these results (both the Bp ones and the Gaussian one) to higher dimensions. See [13] for a a table containing most known results.

Surprisingly, given the importance of the problem, not much else is known. The motivation for this work is to extend the family of distributions for which E[Mn] can be derived.

Consider a point u that is originally generated from some uniform distribution over a unit Lp ball but, has some δ error in the Lq metric when measured or reported. The actual reported point can be equivalently considered as being chosen from a new distribution which we denote by Bp+δBq (the next section provides formal definitions). Note that the support of this distribution is the Minkowksi sum of the two balls.

As an example, Figure 2 shows the support of B∞+δB1. In the diagram, the shaded inner square is the unit ∞-ball. A point u1 chosen from that square is then perturbed by the addition of another point u2 , drawn uniformly from the B1 ball with radius δ. The support of this convoluted distribution is the interior of the dotted region in the figure.

Note that the distribution is NOT uniform in this support. Towards the centre the density is uniform but it decreases approaching the boundary of the support where it becomes zero. Note too that the rate of decrease differs in different parts of the support. It is this non-uniformity that will cause complications in calculating E[Mn].

Although the problem described above was for small δ it is well defined for all δ>0 which is what we analyze in this paper. More specifically, the motivation for the present work is twofold:

The idea of analyzing how quantities change under perturbations is smoothed analysis [20, 21]. In the classic setting, smoothed analysis of the number of maxima would mean analyzing how, given a fixed set Sn, E[Mn] would change under small perturbations (as a function of the original set Sn). This was the approach in [9, 8] (see also similar work for convex hulls in [10]). This paper differs in that it is the Distribution that is being smoothed (or convoluted) and not the point set. This paper also differs from recent work [22, 1] on the most-likely

skyline and convex hull problems in that those papers assume that each point has a given probability distribution and they are attempting to find the subset of points that has the highest probability of being the skyline (or convex hull).

Let D be a distribution over R2.

The Minkowski sum of sets D1 and D2 is

The main result of this paper is

The following collection of Lemmas comprise the basic toolkit used to derive Theorem 1. They are only stated here, with complete proofs being provided in Section 5.

Let D be a distribution over R2, x∈R2 and A⊂R2 a measurable region.

If D is understood we often simply write f(x) and μ(A).

Note that, by definition, ∀v∈D, P(v) is a dominant region in D.

Let v and Sn be chosen from D and A⊆D. Then

The following observation will be used to prove most of our lower bounds.

Let Sn be chosen from D. Further let A1,A2,…,Am be a collection of pairwise disjoint dominant regions in D with μ(Ai)=Ω(1/n) for all i. Then

the preimage of point v in Bp.

Let D be any distribution with a continuous density function f(u) and Sn a set of points chosen from D. Let A,B be two disjoint regions in the support D that are parameterized by t∈[0,T] and satisfy:

Let D be any distribution with a continuous density function f(u) and Sn a set of points chosen from D. Let A,B be two disjoint regions in the support D that are parameterized by t∈[0,T], satisfy conditions 1-3 of Lemma 5 and, in addition, satisfy

Conditions (1) and (2) of Lemma 5 trivially hold. Condition (3) holds because, by symmetry around the x-axis μ(B(t))=μ(A(t)). Finally the additional condition of Lemma 6 holds because every point in B∖B(t) is below and to the left of every point in A(t). Thus the expected number of maximal points in Sn below the x-axis is O(1). Note that this is independent of n. Similarly, the expected number of maximal points to the left of the y-axis is O(1). This proves Eq. 3

To prove Eq. 4 define the second octant to be

By the symmetry between the x and y coordinates in the distribution,

The fact that for δ>0, u dominates v if and only if δu dominates δv implies

Now note that Lemma 9 combined with Lemma 8 immediately imply the limiting behavior in columns (b) and (e) of the table in Theorem 1. Note too that for rows (ii) and (iii), column (d) follows directly from applying Lemma 8 to column (c).

Thus, proving Theorem 1 reduces to proving cells (ii) c, (iii) c, (iv) c,d and (v) c,d. In the next sections we sketch how to derive these results with full proofs relegated to the appendix.

Before sketching our results it is instructive to see how the Lemmas in the previous section can be used to re-derive that fact that, if D=B1 then E[Mn]=Θ(√n). This is illustrated in Figure 4.

The proof of Theorem 1 will require case-by-case analyses of D=Bp+δBq for different pairs p,q. The analysis for each pair will follow exactly the same 5 steps as the analysis of B1 above. We note where the complications arise.

Step 1 of restricting the analysis to quadrant Q1 will be the same for every case.

Step 2, of deriving the measure, will often be quite cumbersome. While Lemma 3 provides an integral formula this, in many cases, is unusable. The density varies quite widely near the border of the support Bp+δBq which is where most of the maxima are located. A substantial amount of work is involved in finding usable functional representations for the densities/measures in different parts of the support.

Step 3, of deriving the lower bound, is usually a simple application of Lemma 2, given the results of step 2.

Step 4 is the hardest step. It is usually derived using the sweep lemma with the difficulties arising from how to specify the regions to be swept. This strongly depends upon how the measure is represented .

Finally, since the Ai are pairwise disjoint,

For Eq. 1 first note that

where (5) comes from the change of variables v=u+w. Differentiating around v yields Eq. 1. □

The proof for (a) follows easily from the fact that, for all u,

Without loss of generality smoothly rescale t so that μ(A(t))=t, and thus T=μ(A).

Now assume that t′ is known. Conditioned on known t′, the remaining n−1 points in Sn are chosen from D∖A(t′) with the associated conditional distribution. More specifically, if u is any one of those n−1 points.

Thus, conditioning on t′, and applying Lemma 1 (b)

Another application of Lemma 1 (c) shows

From the setup in Lemma 5, for all t, all points in B∖B(t) are dominated by all points in A(t). By the definition of t′, A(t′)∩Sn contains (exactly) one point. Thus no point in (B∖B(t′))∩Sn can be maximal, i.e.,

The proof follows from

The proof of Lemma 9 will need an observation that will be reused multiple times in the analysis of B∞+δBq and is therefore stated first, in its own lemma.