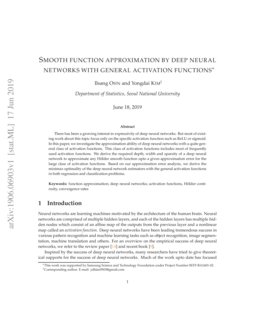 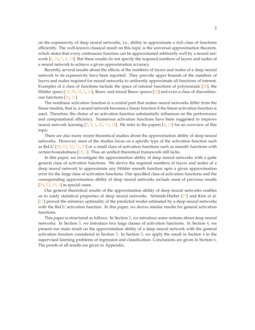 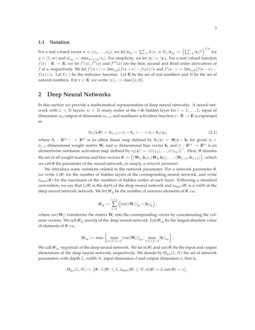 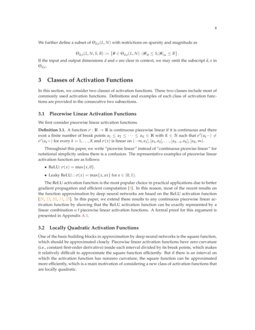 Most Activation Functions Can Win the Lottery Without Excessive Depth

In this work, we explore the approximation capability of deep Rectified ...
Ahmed Abdeljawad, et al. ∙

Neural networks are learning machines motivated by the architecture of the human brain. Neural networks are comprised of multiple hidden layers, and each of the hidden layers has multiple hidden nodes which consist of an affine map of the outputs from the previous layer and a nonlinear map called an activation function. Deep neural networks have been leading tremendous success in various pattern recognition and machine learning tasks such as object recognition, image segmentation, machine translation and others. For an overview on the empirical success of deep neural networks, we refer to the review paper

Recently, several results about the effects of the numbers of layers and nodes of a deep neural network to its expressivity have been reported. They provide upper bounds of the numbers of layers and nodes required for neural networks to uniformly approximate all functions of interest. Examples of a class of functions include the space of rational functions of polynomials [30], the Hölder space [33, 27, 2, 21], Besov and mixed Besov spaces [29] and even a class of discontinuous functions [25, 16].

There are also many recent theoretical studies about the approximation ability of deep neural networks. However, most of the studies focus on a specific type of the activation function such as ReLU [33, 27, 25, 16, 29]

, or small classes of activation functions such as sigmoidal functions with additional monotonicity, continuity, and/or boundedness conditions

to the supervised learning problems of regression and classification. Conclusions are given in Section

6. The proofs of all results are given in Appendix.

We denote by 1(⋅) the indicator function. Let R be the set of real numbers and N

be the set of natural numbers. For a real valued vector

where Al:Rnl−1→Rnl is an affine linear map defined by Al(x)=Wlx+bl for given nl×nl−1 dimensional weight matrix Wl and nl

where vec(Wl) transforms the matrix Wl into the corresponding vector by concatenating the column vectors. We call \absθ0 sparsity of the deep neural network. Let \absθ∞ be the largest absolute value of elements of θ, i.e.,

We further define a subset of Θd,o(L,N) with restrictions on sparsity and magnitude as

Throughout this paper, we write “picewise linear” instead of “continuous picewise linear” for notational simplicity unless there is a confusion. The representative examples of piecewise linear activation functions are as follows:

A function σ:R→R is locally quadratic if there exits an open interval (a,b)⊂R on which σ is three times continuously differentiable with bounded derivatives and there exists t∈(a,b) such that σ′(t)≠0 and σ′′(t)≠0.

In addition, piecewise smooth function having nonzero second derivative on at least one piece, is also locally quadratic. Examples are:

In this section we introduce the function class we consider and show the approximation ability of the deep neural networks with a activation function considered in Section 3.

We recall the definition of Hölder smooth functions. For a d-dimensional multiple index m≡(m1,…,md)∈Nd0 where N0:=N∪{0}, we let xm:=xm11⋯xmdd for x∈Rd. For a function f:X→R, where X denotes the domain of the function, we let ∥f∥∞:=supx∈X|f(x)|. We use notation

for m∈Nd0 to denote a derivative of f of order m. We denote by Cm(X), the space of m times differentiable functions on X whose partial derivatives of order m with |m|≤m are continuous. We define the Hölder coefficient of order s∈(0,1] as

For a positive real value α, the Hölder space of order α is defined as

where ∥f∥Hα(X) denotes the Hölder norm defined by

We denote by Hα,R(X) the closed ball in the Hölder space of radius R with respect to the Hölder norm, i.e.,

We present our main theorem in this section.

Let d∈N, α>0 and R>0. Let the activation function σ be either continuous piecewise linear or locally quadratic. Let f∈Hα,R([0,1]d). Then there exist positive constants L0, N0, S0 and B0 depending only on d, α, R and σ such that, for any ϵ>0, there is a neural network

The result of Theorem 4.1 is equivalent to the results on the approximation by ReLU neural networks [33, 27] in a sense that the upper bounds of the depth, width and sparsity are the same orders of those for ReLU, namely, depth =O(log(1/ϵ)), width =O(ϵ−d/α) and sparsity =O(ϵ−d/αlog(1/ϵ)). We remark that each upper bound is equivalent to the corresponding lower bound established by [33] up to logarithmic factor.

Even if the orders of the depth, width and sparsity are the same for both both piecewise linear and locally quadratic activation functions, the ways of approximating a smooth function by use of these two activation function classes are quite different. To describe this point, let us provide an outline of the proof. We first consider equally spaced grid points with length 1/M inside the d-dimensional unit hypercube [0,1]d. Let Gd,M be the set of such grid points, namely,

For a given Hölder smooth function f of order α, we first find a “local” function for each grid that approximates the target function near the grid point but vanishes at apart from the grid point. To be more specific, we construct the local functions gz, z∈Gd,M which satisfies:

for some universal constant C>0. The inequality (4.3) implies that the more grid points we used, the more accurate approximation we get. Moreover, the quality of approximation is improved when the target function is more smooth (i.e., large α) and low dimensional (i.e., small d ). In fact, gz,M(x) is given by a product of the Taylor polynomial Pz,M(x):=∑m∈Nd0:|m|≤α\del∂mf(z)(x−z)mm! at z and the local basis function ϕz,M(x):=∏dj=1(1/M−|xj−zj|)+, where m!:=∏dj=1mj!. By simple algebra, we have

We close this section by giving a comparison of our result to the approximation error analysis of [2]. Bauer and Kohler [2] studies approximation of the Hölder smooth function of order α by a two layer neural network with m-admissible activation functions with m≥α, where a function σ is called m-admissible if (1) σ is at least m+1 times continuously differentiable with bounded derivatives; (2) a point t∈R exists, where all derivatives up to the order m of σ are different from zero; and (3) |σ(x)−1|≤1/x for x>0 and |σ(x)|≤1/|x| for x<0. Our notion of locally quadratic activation functions is a generalized version of the m-admissibility.

In this section, we apply our results about the approximation error of neural networks to the supervised learning problems of regression and classification. Let X be the input space and Y the output space. Let F be a given class of measurable functions from X to Y. Let P0 be the true but unknown data generating distribution on X×Y. The aim of supervised learning is to find a predictive function that minimizes the population risk R(f):=E(X,Y)∼P0ℓ(Y,f(X))

with respect to a given loss function

ℓ. Since P0 is unknown, we cannot directly minimize the population risk, and thus any estimator ^f inevitably has the excess risk which is defined as R(^f)−inff∈FR(f). For a given sample of size n, let Fn be a given subset of F called a sieve and let (x1,y1),…,(xn,yn) be observed (training) data of input–output pairs assumed to be independent realizations of (X,Y) following P0. Let ^fn be an estimated function among Fn based on the training data (x1,y1),…,(xn,yn). The excess risk of ^fn is decomposed to approximation and estimation errors as

There is a trade-off between approximation and estimation errors. If the function class Fn is sufficiently large to approximate the optimal estimator f∗:=argminf∈FR(f)

well, then the estimation error becomes large due to high variance. In contrast, if

Fn is small, it leads to low estimation error but it suffers from large approximation error.

One of the advantages of deep neural networks is that we can construct a sieve which has good approximation ability as well as low complexity. Schmidt-Hieber [27] and Kim et al. [17] proved that a neural network estimator can achieve the optimal balance between the approximation and estimation errors to obtain the minimax optimal convergence rates in regression and classification problems, respectively. But they only considered the ReLU activation function. Based on the results of Theorem 4.1, we can easily extend their results to general activation functions.

where B∞(fj,δ):={f∈F:∥f−fj∥∞≤δ}. The following proposition provides the covering number of a class of functions generated by neural networks.

Assume that the activation function σ is Lipschitz continuous with the Lipschitz constant Cσ. Consider a class of functions generated by a deep neural network

First we consider the regression problem. For simplicity, we let X=[0,1]d. Suppose that the generated model is Y|X=x∼N(f0(x),1) for some f0:[0,1]d→R. The performance of an estimator is measured by the L2 risk R2,f0(f), which is defined by

where Px is the marginal distribution of X. The following theorem proves that the optimal convergence rate is obtained by the deep neural network estimator of the regression function f0 for a general activation function.

Suppose that the activation function σ is either piecewise linear or locally quadratic satisfying the Lipschitz condition (5.2). Then there are universal positive constants L0, N0, S0 and B0 such that the deep neural network estimator obtained by

for some κ>0 satisfies

for some universal constant C>0, where the expectation is taken over the training data.

denotes the Bernoulli distribution with parameter

is the conditional probability function

It is well known that the convergence rate of the excess risk for classification is faster than that of regression when the conditional probability function η(x) satisfies the following condition: there is a constant q∈[0,∞] such that for any sufficiently small u>0, we have

This condition is called the Tsybakov noise condition and q is called the noise exponent [23, 31]. When q is larger, the classification task is easier since the probability of generating vague samples become smaller. The following theorem proves that the optimal convergence rate can be obtained by the deep neural network estimator with an activation function considered in Section 3. As is done by [17], we consider the hinge loss ℓhinge(z):=max{1−z,0}.

Assume the Tsybakov noise condition (5.4) with the noise exponent q∈[0,∞]. Suppose that the activation function σ, which is either piecewise linear or locally quadratic satisfying the Lipschitz condition (5.2), is used for all hidden layers except the last one and the ReLU activation function is used for the last hidden layer. Then there are universal positive constants L0, N0, S0 and B0 such that the deep neural network estimator obtained by

for some universal constant C>0, where the expectation is taken over the training data.

Note that the Bayes classifier f∗:=argminf∈FR01,η(f) is given by

Appendix A Proof of Theorem 4.1

a.1 Proof of Theorem 4.1 for Piecewise Linear Activation Functions

where C1>0 is a constant depending on the activation function σ.

Thanks to Lemma A.1, to prove Theorem 4.1 for piecewise linear activation functions, it suffices to show the approximation ability of the ReLU networks, which is already done by [27] as in the next lemma.

Theorem 4.1 for piecewise linear activation functions is a direct consequence of Lemmas A.1 and A.2, which is summarized as follows.

a.2 Proof of Theorem 4.1 for Locally Quadratic Activation Functions