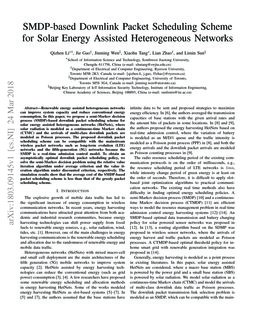 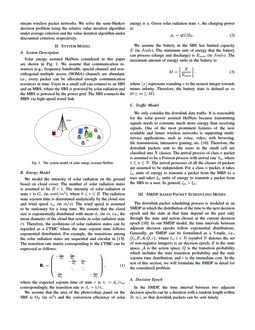 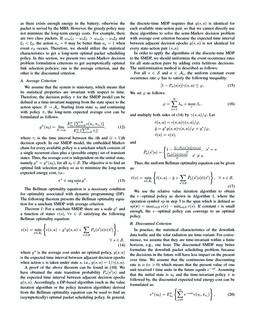 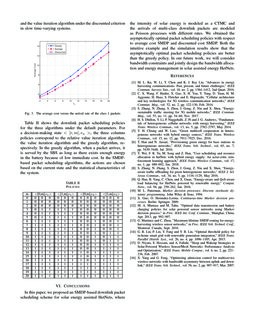 Heterogeneous networks (HetNets) with mixed macro-cell and small cell deployment are the main architectures of the fifth generation (5G) mobile networks to improve system capacity [2]. HetNets assisted by energy harvesting technologies can reduce the conventional energy (such as grid power) consumption [3, 4]. A few researchers have proposed some renewable energy scheduling and allocation methods in energy harvesting HetNets. Some of the works modeled energy harvesting HetNets as slot-based systems [5, 6, 7]. In [5] and [7], the authors assumed that the base stations have infinite data to be sent and proposed strategies to maximize energy efficiency. In [6], the authors averaged the transmission capacities of base stations with the given arrival rates and the amount bits of packets in some locations. In [8] and [9], the authors proposed the energy harvesting HetNets based on real-time admission control, where the variation of battery is modeled as an M/D/1 queue and the traffic intensity is modeled as a Poisson point process (PPP) in [8], and both the energy arrivals and the downlink packet arrivals are modeled as Poisson counting processes in [9].

The radio resource scheduling period of the existing communication protocols is on the order of milliseconds, e.g., the resource scheduling period of LTE networks is 1ms, while intensity change period of green energy is at least on the order of seconds. Therefore, it is difficult to apply slot-based joint optimization algorithms to practical communication networks. The existing real time methods also have difficulty in finding optimal energy scheduling policies. A semi-Markov decision process (SMDP)[10] and a continuous-time Markov decision process (CTMDP) [11] are efficient ways to model the resource management problem in real-time admission control energy harvesting systems [12, 13, 14]. An SMDP-based optimal data transmission and battery charging policy for solar powered sensor networks was proposed in [12]. In [13], a routing algorithm based on the SDMP was proposed in wireless sensor networks, where the arrivals of energy harvest and traffic packets are modeled as Poisson processes. A CTMDP-based optimal threshold policy for in-home smart grid with renewable generation integration was proposed in [14].

Generally, energy harvesting is modeled as a point process in existing literatures. In this paper, solar energy assisted HetNets are considered, where a macro base station (MBS) is powered by the power grid and a small base station (SBS) is powered by solar radiation. We model solar radiation as a continuous-time Markov chain (CTMC) and model the arrivals of multi-class downlink data traffic as Poisson processes. The downlink packet transmission link selection problem is modeled as an SMDP, which can be compatible with the mainstream wireless packet networks. We solve the semi-Markov decision problem using the relative value iteration algorithm under average criterion and the value iteration algorithm under discounted criterion, respectively.

Solar energy assisted HetNets considered in this paper are shown in Fig. 1. We assume that communication resources (e.g., frequency bandwidth, spacial channel and non-orthogonal multiple access (NOMA) channel) are abundant, i.e., every packet can be allocated enough communication resources in time. Users in a small cell can connect to an SBS and an MBS, where the SBS is powered by solar radiation and the MBS is powered by the power grid. The SBS connects the MBS via high-speed wired link.

). The wind speed is assumed to be stationary for a long time. We assume that the cloud size is exponentially distributed with mean

where the expected sojourn time of state r is τr=dr/vw, correspondingly, the transition rate is βr=1/τr.

We assume that the area of the photovoltaic panel on the SBS is ΩS (in m2) and the conversion efficiency of solar energy is η. Given solar radiation state r, the charging power is:

where ⌊x⌋ represents rounding x to the nearest integer towards minus infinity. Therefore, the battery state is defined as m (0≤m≤M).

We only consider the downlink data traffic. It is reasonable for the solar power assisted HetNets because transmitting signals needs to consume much more energy than receiving signals. One of the most prominent features of the now available and future wireless networks is supporting multi-service applications, such as voice, video, web browsing, file transmission, interactive gaming, etc.[16]

. Therefore, the downlink packets sent to the users in the small cell are classified into

[10]. In our SMDP model, the time intervals between adjacent decision epochs follow exponential distributions. Generally, an SMDP can be formulated as a 5-tuple, i.e., {ti,S,A,Q,c}, where ti, i∈N (symbol N denotes the set of non-negative integers) is an decision epoch, S is the state space, A is the action space, Q

c is the immediate cost. In the rest of this section, we will formulate the SMDP in detail for the considered problem.

In the SMDP, the time interval between two adjacent decision epochs can be a duration with a random length within [0,∞), so that downlink packets can be sent timely.

Given solar radiation state r, the amount of time to harvest a unit energy is:

If the next event is the arrival of a class n′ packet (i.e., en′) and occurs within duration [0,Tr), the next state is s′=<[r,m],en′>. Since all the downlink packet arrivals and the next solar radiation state arrival are independent under the given state-action pair (s,a), the occurrence rate of the next event is:

where the time interval from the state-action pair (s,a) to the next event en′ occurrence follows an exponential distribution with parameter λn′

(represented as the random variable

X in Fig. 2), and the time interval to the other events occurrence follows an exponential distribution with parameter ∑n≠n′λn+βr (represented as the random variable Y in Fig. 2

). The probability density functions are respectively as follows:

Random variables X and Y are independent. Since the next battery state is m′=m, the state transition probability (the integral of the function fX(x)⋅fY(y) over the region R0 in Fig. 2) is:

The simplest link selection policy is the greedy policy, i.e., when a packet arrives, it is served by the SBS as long as there exists enough energy in the battery; otherwise the packet is served by the MBS. However, the greedy policy may not minimize the long-term energy costs. For example, there are two class packets. If ωmζ1−ωsξ1>ωmζ2−ωsξ2 and ξ1<ξ2, the action as=0 may be better than as=1 when event e2 occurs. Therefore, we should utilize the statistical characteristics to get a long-term optimal packet scheduling policy. In this section, we present two semi-Markov decision problem formulation criterions to get asymptotically optimal link selection policies; one is the average criterion, and the other is the discounted criterion.

We assume that the system is stationary, which means that its statistical properties are invariant with respect to time. Therefore, the decision policy π for the SMDP model can be defined as a time-invariant mapping from the state space to the action space: S→As. Starting from state s0 and continuing with policy π, the long-term expected average cost can be formulated as follows:

where τi is the time interval between the ith and (i+1)th decision epoch. In our SMDP model, the embedded Markov chain for every available policy is a unichain which consists of a single recurrent class plus a (possible empty) set of transient states. Thus, the average cost is independent on the initial state, namely gπ=gπ(s0), for all s0∈S. The objective is to find an optimal link selection policy so as to minimize the long-term expected energy cost, i.e.:

For a unichain SMDP, there are a scale g∗ and a function of states v(s), ∀s∈S satisfying the following Bellman optimality equation:

where g∗ is the average cost under an optimal policy, y(s,a) is the expected time interval between adjacent decision epochs when action a is taken under state s, i.e., y(s,a)=1/γ(s,a).

A proof of the above theorem can be found in [10]. We have obtained the state transition probability Pa(s′|s) and the expected time interval between adjacent decision epochs y(s,a). Accordingly, a DP-based algorithm (such as the value iteration algorithm or the policy iteration algorithm) derived from the Bellman optimality equation can be used to find an (asymptotically) optimal packet scheduling policy. In general, the discrete-time MDP requires that y(s,a) is identical for each available state-action pair, so that we cannot directly use these algorithms to solve the semi-Markov decision problem with average cost criterion because the expected time interval between adjacent decision epochs y(s,a) is not identical for every state-action pair (s,a).

In order to apply the algorithms of the discrete-time MDP to the SMDP, we should uniformize the event occurrence rates for all state-action pairs by adding extra fictitious decisions. The uniformization method is described as follows:

For all s∈S and a∈As, the uniform constant event occurrence rate φ has to satisfy the following inequality:

We set φ as follows:

Thus, the uniform Bellman optimality equation can be given as:

In practice, the statistical characteristics of the downlink data traffic and the solar radiation are time-variant. For convenience, we assume that they are time-invariant within a finite horizon, e.g., one hour. The discounted SMDP may better formulate the downlink packet scheduling problem, because the decisions in the future will have less impact on the present over time. We assume that the continuous-time discounting rate is α (α>0) which means that the present value of one unit received t time units in the future equals e−αt. Assuming that the initial state is s0 and the time-invariant policy π is followed by, the discounted expected total energy cost can be formulated as:

where σi represents the time of the ith decision epoch.

We define Qa(t,s′|s) as the transition probability that the next decision epoch occurs at or before time t, and the system state at that decision epoch equals s′ under the current state-action pair (s,a). We also define ma(s′|s) as

In the same way, qa(t,s′|s) for all available s′ can be obtained. Therefore, the discounted expected total energy cost can be also formulated as:

According to the Bellman equation, we use the value iteration algorithm (Algorithm 2) to solve the discounted semi-Markov decision problem so as to obtain an asymptotically optimal packet scheduling policy.

In this section, we evaluate the system performance of our proposed SMDP-based downlink packet scheduling scheme by Matlab numerical simulation. Specifically, we present the average cost and policy of the relative value iteration algorithm under average criterion, the value iteration algorithm under discounted criterion and the greedy algorithm, respectively. We describe the simplified solar radiation in two states, i.e., direct sunlight and cloud cover. The solar radiation states are sequential and circular. We assume there are two classes of downlink packets. The simulation parameters are summarized in Table I. We use Monte Carlo method to generate random data based on the corresponding parameters to measure the average cost. The simulation results of the average cost are averaged over 10 runs, where each simulation run lasts for 3600s.

Table II shows the downlink packet scheduling policies for the three algorithms under the default parameters. For a decision-making state <[r,m],en>, the three columns policies correspond to the relative value iteration algorithm, the value iteration algorithm and the greedy algorithm, respectively. In the greedy algorithm, when a packet arrives, it is served by the SBS as long as there exists enough energy in the battery because of low immediate cost. In the SMDP-based packet scheduling algorithms, the actions are chosen based on the current state and the statistical characteristics of the system.

In this paper, we proposed an SMDP-based downlink packet scheduling scheme for solar energy assisted HetNets, where the intensity of solar energy is modeled as a CTMC and the arrivals of multi-class downlink packets are modeled as Poisson processes with different rates. We obtained the asymptotically optimal packet scheduling policies with respect to average cost SMDP and discounted cost SMDP. Both the intuitive example and the simulation results show that the asymptotically optimal packet scheduling policies are better than the greedy policy. In our future work, we will consider bandwidth constraints and jointly design the bandwidth allocation and energy management in solar assisted energy HetNets.