Sinkless orientation is hard also in the supported LOCAL model

We show that any algorithm that solves the sinkless orientation problem in the supported LOCAL model requires Ω(log n) rounds, and this is tight. The supported LOCAL is at least as strong as the usual LOCAL model, and as a corollary this also gives a new, short and elementary proof that shows that the round complexity of the sinkless orientation problem in the deterministic LOCAL model is Ω(log n). 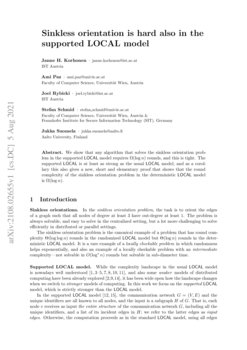 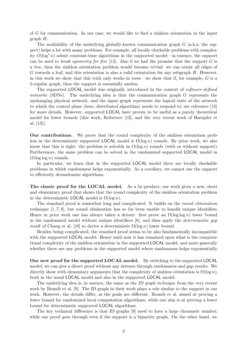 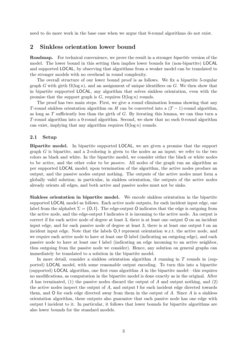 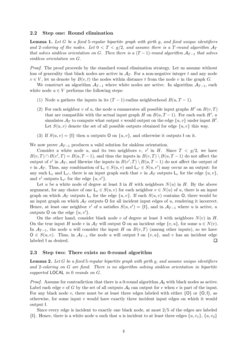 Message Reduction in the Local Model is a Free Lunch

In this paper, we show that the Minimum Spanning Tree problem can be sol...
Krzysztof Nowicki, et al. ∙

In recent years the sleeping model came to the focus of researchers. In ...
Tzalik Maimon, et al. ∙

Local Problems on Trees from the Perspectives of Distributed Algorithms, Finitary Factors, and Descriptive Combinatorics

A rich line of work has been addressing the computational complexity of ...
Alkida Balliu, et al. ∙

In the sinkless orientation problem, the task is to orient the edges of a graph such that all nodes of degree at least 3 have out-degree at least 1. The problem is always solvable, and easy to solve in the centralized setting, but a lot more challenging to solve efficiently in distributed or parallel settings.

While the complexity landscape in the usual LOCAL model is nowadays well understood [3, 5, 1, 4, 8, 7, 11, 10], and also some weaker models of distributed computing have been already explored [9, 14, 2], it has been wide open how the landscape changes when we switch to stronger models of computing. In this work we focus on the supported LOCAL model, which is strictly stronger than the LOCAL model.

In the supported LOCAL model [15, 12], the communication network G=(V,E) and the unique identifiers are all known to all nodes, and the input is a subgraph H of G. That is, each node v receives as input the entire structure of the communication network G, including all the unique identifiers, and a list of its incident edges in H; we refer to the latter edges as input edges. Otherwise, the computation proceeds as in the standard LOCAL model, using all edges of G for communication. In our case, we would like to find a sinkless orientation in the input graph H.

The availability of the underlying globally-known communication graph G (a.k.a. the support) helps a lot with many problems. For example, all locally checkable problems with complexity O(log∗n) admit constant-time algorithms in the supported model—in essence, the support can be used to break symmetry for free [12]. Also if we had the promise that the support G is a tree, then the sinkless orientation problem would become trivial: we can orient all edges of G towards a leaf, and this orientation is also a valid orientation for any subgraph H. However, in this work we show that this trick only works in trees—we show that if, for example, G is a 5-regular graph, then the support is essentially useless.

The supported LOCAL model was originally introduced in the context of software-defined networks (SDNs). The underlying idea is that the communication graph G represents the unchanging physical network, and the input graph represents the logical state of the network to which the control plane (here, distributed algorithm) needs to respond to; see reference [15] for more details. However, supported LOCAL have proven to be useful as a purely theoretical model for lower bounds (this work, Reference [12], and the very recent work of Haeupler et al. [13]).

In particular, we learn that in the supported LOCAL model there are locally checkable problems in which randomness helps exponentially. As a corollary, we cannot use the support to efficiently derandomize algorithms.

The classic proof for the LOCAL model.

As a by-product, our work gives a new, short and elementary proof that shows that the round complexity of the sinkless orientation problem in the deterministic LOCAL model is Ω(logn).

The standard proof is somewhat long and complicated. It builds on the round elimination technique [1, 8, 7], but round elimination has so far been unable to handle unique identifiers. Hence in prior work one has always taken a detour: first prove an Ω(loglogn) lower bound in the randomized model without unique identifiers [8], and then apply the deterministic gap result of Chang et al. [10] to derive a deterministic Ω(logn) lower bound.

Our new proof for the supported LOCAL model.

The underlying idea is, in essence, the same as the ID graph technique from the very recent work by Brandt et al. [9]. The ID graph in their work plays a role similar to the support in our work. However, the details differ, as the goals are different. Brandt et al. aimed at proving a lower bound for randomized local computation algorithms, while our aim is at proving a lower bound for deterministic supported LOCAL algorithms.

The key technical difference is that ID graphs [9] need to have a large chromatic number, while our proof goes through even if the support is a bipartite graph. On the other hand, we need to do more work in the base case when we argue that 0-round algorithms do not exist.

For technical convenience, we prove the result in a stronger bipartite version of the model. The lower bound in this setting then implies lower bounds for (non-bipartite) LOCAL and supported LOCAL, by observing that algorithms from a weaker model can be translated to the stronger models with no overhead in round complexity.

The overall structure of our lower bound proof is as follows. We fix a bipartite 5-regular graph G with girth Ω(logn), and an assignment of unique identifiers on G. We then show that in bipartite supported LOCAL, any algorithm that solves sinkless orientation, even with the promise that the support graph is G, requires Ω(logn) rounds.

In bipartite supported LOCAL, we are given a promise that the support graph G is bipartite, and a 2-coloring is given to the nodes as an input; we refer to the two colors as black and white. In the bipartite model, we consider either the black or white nodes to be active, and the other color to be passive. All nodes of the graph run an algorithm as per supported LOCAL model; upon termination of the algorithm, the active nodes produce an output, and the passive nodes output nothing. The outputs of the active nodes must form a globally valid solution; in particular, in sinkless orientation, the outputs of the active nodes already orients all edges, and both active and passive nodes must not be sinks.

In more detail, consider a sinkless orientation algorithm A running in T rounds in (supported) LOCAL model, with some reasonable output encoding. To turn this into a bipartite (supported) LOCAL algorithm, one first runs algorithm A in the bipartite model—this requires no modifications, as computation in the bipartite model is done exactly as in the original. After A has terminated, (1) the passive nodes discard the output of A and output nothing, and (2) the active nodes inspect the output of A, and output I for each incident edge directed towards them, and O for each edge directed away from them in the output of A. Since A is a sinkless orientation algorithm, these outputs also guarantee that each passive node has one edge with output I incident to it. In particular, it follows that lower bounds for bipartite algorithms are also lower bounds for the standard models.

2.2 Step one: Round elimination

The proof proceeds by the standard round elimination strategy. Let us assume without loss of generality that black nodes are active in AT. For a non-negative integer t and any node v∈V, let us denote by B(v,t) the nodes within distance t from the node v in the graph G.

We now prove AT−1 produces a valid solution for sinkless orientation.

Let u be a white node of degree at least 3 in H with neighbors N(u) in H. By the above argument, for any choice of one Lv∈S(u,v) for each neighbor v∈N(u) of u, there is an input graph on which AT outputs Lv for the edge {u,v}. If each S(u,v) contains O, there would be an input graph on which AT outputs O for all incident input edges of u, rendering it incorrect. Hence, at least one neighbor v′ of u satisfies S(u,v′)={I}, and in AT−1 where u is active, u outputs O on the edge {u,v′}.

On the other hand, consider black node v of degree at least 3 with neighbors N(v) in H. On the true input H node v in AT will output O on an incident edge {v,u}, for some u∈N(v). In AT−1, the node u will consider the input H on B(v,T) (among other inputs), so we have O∈S(u,v). Thus, in AT−1 the node u will output I on {v,u}, and v has an incident edge labeled I as desired. ∎

2.3 Step two: There exists no 0-round algorithm

Let G be a fixed 5-regular bipartite graph with girth g, and assume unique identifiers and 2-coloring on G are fixed. There is no algorithm solving sinkless orientation in bipartite supported LOCAL in 0 rounds on G.

Assume for contradiction that there is a 0-round algorithm A0 with black nodes as active. Label each edge e of G by the set of all outputs A0 can output for e when e is part of the input. For any black node v, there must be at least three edges labeled with either {O} or {O,I}, as otherwise, for some input v would have exactly three incident input edges on which it would output I.

Since every edge is incident to exactly one black node, at most 2/5 of the edges are labeled {I}. Hence, there is a white node u such that u is incident to at least three edges {u,v1}, {u,v2} and {u,v3} labeled with either {O} or {O,I}. Now consider an input where these three edges are the only input edges incident to u. Since the output of each node vi depends only on its incident input edges, we can select for each vi an input where vi outputs O for edge {u,vi}. Moreover, since A0 is a 0-round algorithm and nodes v1, v2 and v3 are not neighbors, we can do this for all of them simultaneously. Thus, there exists an input where A0 outputs O on all incident input edges of the passive node u, a contradiction. ∎

Let G be a bipartite 5-regular graph with girth g=Ω(logn). Observe that we can obtain one e.g. by taking the bipartite double cover of any 5-regular graph of girth Ω(logn), which are known to exist (see e.g., [6, Ch. 3]).

where algorithm Ai solves sinkless orientation in i rounds.

In particular, A0 solves sinkless orientation in 0 rounds. By Lemma 2, this is impossible, so algorithm AT cannot exist. ∎

Any LOCAL algorithm A that runs in T(n) rounds can be simulated in supported LOCAL in T(n) rounds by ignoring non-input edges: simply run A on the input graph H. Thus, the claim follows immediately from Theorem 3. ∎