Under certain conditions, an element of a tensor product space can be identified with a compact operator and the singular value decomposition (SVD) applies to the latter. These conditions are not fulfilled in Sobolev spaces. In the previous part of this work (part I), we introduced some preliminary notions in the theory of tensor product spaces. We analyzed low-rank approximations in H1 and the error of the SVD performed in the ambient L2 space. In this work (part II), we continue by considering variants of the SVD in norms stronger than the L2-norm. Overall and, perhaps surprisingly, this leads to a more difficult control of the H1-error. We briefly consider an isometric embedding of H1 that allows direct application of the SVD to H1-functions. Finally, we provide a few numerical examples that support our theoretical findings. 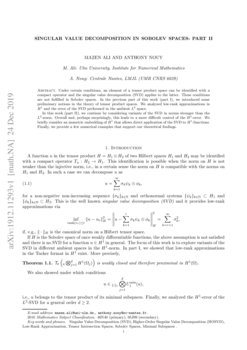 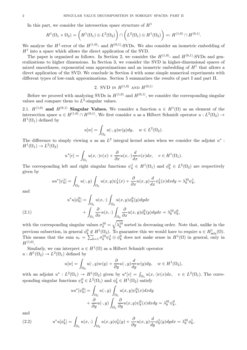 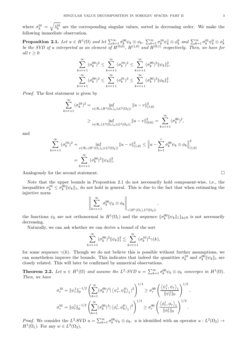 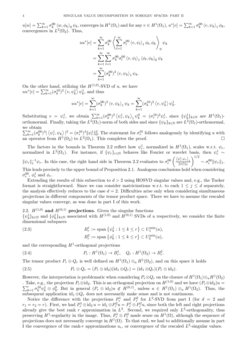 Recently, there has been a lot of research into tensor singular value de...
Wen-Hao Xu, et al. ∙

language identification (LID) is identifing a language in a given spoken...
Anirban Bhowmick, et al. ∙

Comparison of SVD and factorized TDNN approaches for speech to text

This work concentrates on reducing the RTF and word error rate of a hybr...
Jeffrey Josanne Michael, et al. ∙

A function u in the tensor product H=H1⊗H2 of two Hilbert spaces H1 and H2 may be identified with a compact operator Tu:H2→H1. This identification is possible when the norm on H is not weaker than the injective norm, i.e., in a certain sense the norm on H is compatible with the norms on H1 and H2. In such a case we can decompose u as

for a non-negative non-increasing sequence {σk}k∈N and orthonormal systems {ψk}k∈N⊂H1 and {ϕk}k∈N⊂H2. This is the well known singular value decomposition (SVD) and it provides low-rank approximations via

if, e.g., ∥⋅∥H is the canonical norm on a Hilbert tensor space.

If H is the Sobolev space of once weakly differentiable functions, the above assumption is not satisfied and there is no SVD for a function u∈H1 in general. The focus of this work is to explore variants of the SVD in different ambient spaces in the H1-norm. In part I, we showed that low-rank approximations in the Tucker format in H1 exist. More precisely,

We also showed under which conditions

i.e., u belongs to the tensor product of its minimal subspaces. Finally, we analyzed the H1-error of the L2-SVD for a general order d≥2.

In this part, we consider the intersection space structure of H1

We analyze the H1-error of the H(1,0)- and H(0,1)-SVDs. We also consider an isometric embedding of H1 into a space which allows the direct application of the SVD.

The paper is organized as follows. In Section 2, we consider the H(1,0)- and H(0,1)-SVDs and generalizations to higher dimensions. In Section 3, we consider the SVD in higher-dimensional spaces of mixed smoothness, exponential sum approximations and an isometric embedding of H1 that allows a direct application of the SVD. We conclude in Section 4 with some simple numerical experiments with different types of low-rank approximations. Section 5 summarizes the results of part I and part II.

Before we proceed with analyzing SVDs in H(1,0) and H(0,1), we consider the corresponding singular values and compare them to L2-singular values.

The difference to simply viewing u as an L2 integral kernel arises when we consider the adjoint u∗:H1(Ω1)→L2(Ω2)

with the corresponding singular values σ10k=√λ10k sorted in decreasing order. Note that, unlike in the previous subsection, in general ϕ0k∉H1(Ω2). To guarantee this we would have to require u∈H1mix(Ω). This means that the sum ur=∑rk=1σ10kψ1k⊗ϕ0k does not make sense in H1(Ω) in general, only in H(1,0).

Similarly, we can interpret u∈H1(Ω) as a Hilbert Schmidt operator u:H1(Ω2)→L2(Ω1) defined by

where σ01k=√λ01k are the corresponding singular values, sorted in decreasing order. We make the following immediate observation.

The first statement is given by

Analogously for the second statement. ∎

Note that the upper bounds in Proposition 2.1 do not necessarily hold component-wise, i.e., the inequalities σ10k≤σ00k∥ψk∥1,

do not hold in general. This is due to the fact that when estimating the injective norm

the functions ψk are not orthonormal in H1(Ω1) and the sequence {σ00k∥ψk∥1}k∈N is not necessarily decreasing.

Naturally, we can ask whether we can derive a bound of the sort

for some sequence γ(k). Though we do not believe this is possible without further assumptions, we can nonetheless improve the bounds. This indicates that indeed the quantities σ10k and σ00k∥ψk∥1 are closely related. This will later be confirmed by numerical observations.

The factors in the bounds in Theorem 2.2 reflect how ψ1r, normalized in H1(Ω1), scales w.r.t. ψr, normalized in L2(Ω1). For instance, if {ψr}r∈N behaves like Fourier or wavelet basis, then ψ1r∼∥ψr∥−11ψr. In this case, the right hand side in Theorem 2.2 evaluates to σ00r(⟨ψ1r,ψr⟩1∥ψ1r∥0)1/2∼σ00r∥ψr∥1. This leads precisely to the upper bound of Proposition 2.1. Analogous conclusions hold when considering σ00r, ϕ1r and ϕr.

Extending the results of this subsection to d>2 using HOSVD singular values and, e.g., the Tucker format is straightforward. Since we can consider matricizations w.r.t. to each 1≤j≤d separately, the analysis effectively reduces to the case d=2. Difficulties arise only when considering simultaneous projections in different components of the tensor product space. There we have to assume the rescaled singular values converge, as was done in part I of this work.

Given the singular functions {ψ1k}k∈N and {ϕ1k}k∈N associated with H(1,0) and H(0,1) SVDs of u respectively, we consider the finite dimensional subspaces

and the corresponding H1-orthogonal projections

The tensor product Pr⊗Qr is well defined on H1(Ω1)⊗aH1(Ω2), and on this space it holds

However, the interpretation is problematic when considering Pr⊗Qr on the closure of H1(Ω1)⊗aH1(Ω2) . Take, e.g., the projection Pr⊗id2. This is an orthogonal projection on H(1,0) and we have (Pr⊗id2)u=∑rk=1σ10kψ1k⊗ϕ0k. But in general (Pr⊗id2)u∉H(0,1), unless u∈H1(Ω1)⊗aH1(Ω2). Thus, the subsequent application id1⊗Qr does not necessarily make sense and is not continuous.

Notice the difference with the projections P1r and P2r for L2-SVD from part I (for d=2 and r1=r2=r). First, we had P1r⊗id2u=id1⊗P2ru=P1r⊗P2ru, since both the left and right projections already give the best rank r approximation in L2. Second, we required only L2-orthogonality, thus preserving H1-regularity in the image. Thus, P1r⊗P2r made sense on H1(Ω), although the sequence of projections does not necessarily converge in H1(Ω). To that end, we had to additionally assume in part I the convergence of the rank-r approximations ur, or convergence of the rescaled L2-singular values.

Specifically, what are the minimal assumptions - if any - that we require in order to achieve this? The next example shows that indeed even for simple projections this property is not guaranteed.

Define the one dimensional subspace U=span{~g}. The corresponding H1-orthogonal projection P is given by Pv=∥~g∥−21⟨v,~g⟩1~g=∥~g∥−21v(0.5)~g. Consider the sequence

A closer look at the preceding example shows that such a function ~g∈H10(0,1) differentiated twice yields the delta distribution. Therefore, it can not be in H2(Ω1). On the other hand, if the function has H2-regularity, as the next statement shows, we can indeed obtain boundedness in L2.

Let u∈H1(Ω). In addition, assume the second unidirectional derivatives of u exist in the distributional sense and are bounded, i.e., ∥∥∂2∂x2u∥∥0<∞, ∥∥∂2∂y2u∥∥0<∞. Finally, assume u satisfies either zero Dirichlet or zero Neumann boundary conditions. Then, the projections defined in (2.4) can be bounded as

One can easily verify that ψ1k and ϕ1k are twice weakly differentiable for any k∈N. For any v∈H1(Ω1), we can write Prv=∑rk=1⟨v,ψ1k⟩1ψ1k. The coefficients can be written as

Analogously for Qr. This completes the proof. ∎

Note that in principle the assumption on the boundary conditions can be replaced or avoided, as long as we can estimate the appearing boundary term. The assumption can be avoided entirely by using an estimate for the L∞-norm via the Gagliardo-Nirenberg inequality, although this would yield a crude estimate and dimension dependent regularity requirements.

Under the conditions of Lemma 2.4, we can assert that Pr⊗Qr is indeed continuous. Since ∥⋅∥(0,1) is a uniform crossnorm

One might argue that requiring Pr and Qr to be continuous in L2 is unnecessary, since we only need that the mappings Pr⊗id2:H1(Ω)→H(0,1), and id1⊗Qr are continuous. The following example shows that indeed Pr⊗id2 need not be continuous even on elementary tensor products, if Pr is not L2 continuous.

On the other hand

To summarize our findings, let us define the finite dimensional subspaces W1r:=span{ψ0k:1≤k≤r}, W2r:=span{ϕ0k:1≤k≤r}, Under the assumptions of Lemma 2.4, W1r⊂H1(Ω1) and W2r⊂H1(Ω2). This can also be observed by, e.g., considering (2.1) and integrating the second term by parts. We can estimate the H1 error as follows.

Let the assumptions of Lemma 2.4 be satisfied. Moreover, define the constants

Then, the projection error is bounded as

For the lower bound observe first that

Since Pr⊗id2u is the optimal rank r approximation in the ∥⋅∥(1,0)-norm, we can further estimate

and similarly for id1⊗Qr. This gives the lower bound.

For the upper bound, since Pr⊗id2 is orthogonal in the ∥⋅∥(1,0)-norm, we get