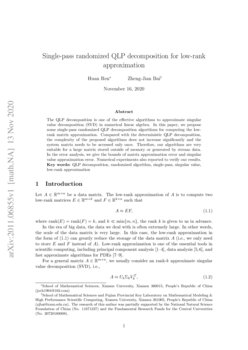 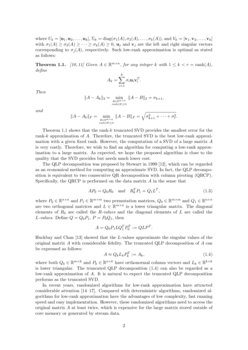 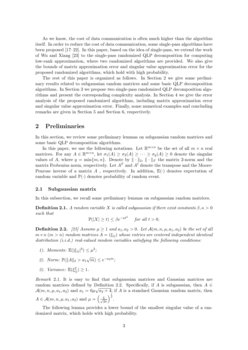 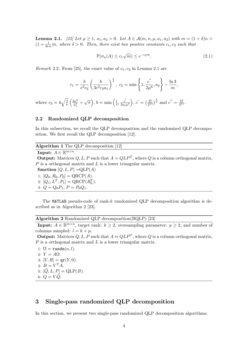 In this paper we present an efficient algorithm to compute the eigen dec...
Youhei Akimoto, et al. ∙

Let A∈Rm×n be a data matrix. The low-rank approximation of A is to compute two low-rank matrices E∈Rm×k and F∈Rk×n such that

). Low-rank approximation is one of the essential tools in scientific computing, including principal component analysis

are the left and right singular vectors corresponding to

σj(A), respectively. Such low-rank approximation is optimal as stated as follows:

Theorem 1.1 shows that the rank-k truncated SVD provides the smallest error for the rank-k approximation of A. Therefore, the truncated SVD is the best low-rank approximation with a given fixed rank. However, the computation of a SVD of a large matrix A is very costly. Therefore, we wish to find an algorithm for computing a low-rank approximation to a large matrix. As expected, we hope the proposed algorithm is close to the quality that the SVD provides but needs much lower cost.

The QLP decomposition was proposed by Stewart in 1999 [12]

, which can be regarded as an economical method for computing an approximate SVD. In fact, the QLP decomposition is equivalent to two consecutive QR decomposition with column pivoting (QRCP). Specifically, the QRCP is performed on the data matrix

A in the sense that

Huckbay and Chan [13] showed that the L-values approximate the singular values of the original matrix A with considerable fidelity. The truncated QLP decomposition of A can be expressed as follows:

The rest of this paper is organized as follows. In Section 2 we give some preliminary results related to subgaussian random matrices and some basic QLP decomposition algorithms. In Section 3 we propose two single-pass randomized QLP decomposition algorithms and present the corresponding complexity analysis. In Section 4 we give the error analysis of the proposed randomized algorithms, including matrix approximation error and singular value approximation error. Finally, some numerical examples and concluding remarks are given in Section 5 and Section 6, respectively.

In this section, we review some preliminary lemmas on subgaussian random matrices and some basic QLP decomposition algorithms.

In this paper, we use the following notations. Let Rm×n be the set of all m×n real matrices. For any A∈Rm×n, let σ1(A)≥σ2(A)≥⋯≥σq(A)≥0 denote the singular values of A, where q=min{m,n}. Denote by ∥⋅∥2, ∥⋅∥F the matrix 2-norm and the matrix Frobenius norm, respectively. Let AT and A† denote the transpose and the Moore-Penrose inverse of a matrix A , respectively. In addition, E(⋅)

denotes expectation of random variable and

In this subsection, we recall some preliminary lemmas on subgaussian random matrices.

A random variable X is called subgaussian if there exist constants β,κ>0 such that

is a standard Gaussian random matrix, then

The following lemma provides a lower bound of the smallest singular value of a randomized matrix, which holds with high probability.

The MATLAB pseudo-code of rank-k randomized QLP decomposition algorithm is described as in Algorithm 2 [23].

In this subsection, we give a regular single-pass randomized QLP decomposition algorithm for computing the low-rank approximation to a data matrix A∈Rm×n. To calculate the low-rank approximation of A, we first construct a low-rank matrix V with orthonormal columns such that A≈VVTA and range(V)≈range(A). We observe that, in Algorithm 2, range(V)≈range(A) and VVT is an approximate orthogonal projector on range(A). Thus

A single-pass randomized algorithm should realize that each entry of the input matrix can only be accessed once. To do so, we wish replace the matrix B=VTA in Step 4 of Algorithm 2 by another expression without A. We note that, for the matrix V generated by Algorithm 2, we have A≈VVTA. Then, for B=VTA, we have A≈VB. Premultiplying Ω2 on both sides of A≈VB we get

Therefore, the matrix B can be approximately expressed as

Next, we give the single-pass randomized QLP decomposition algorithm, which is stated in Algorithm 3.

On the complexity of Algorithm 3, we have the following remarks.

The total complexity of Algorithm 3 is

We note that l=l1 and k≤l1≤l2≤min{m,n}. Hence, Algorithm 2 has slightly lower complexity than Algorithm 3. As we know, the cost of data communication is even more expensive than the algorithm itself. In particular, when the data is stored outside the core memory and the data matrix is very large, the cost of data communication is much larger than the algorithm itself. We observe that Algorithm 2 needs to access the data matrix A twice. Thus, the total computation cost of Algorithm 2 may be much more expensive than Algorithm 3.

In this subsection, we consider replacing Gauss randomized matrix with a sketch of input matrix A, i.e., choosing Ω2=YT1=(AΩ1)T. As in [14], we propose a subspace-orbit single-pass randomized QLP decomposition algorithm (SORQLP) for computing a low-rank approximation of A.

From the analysis in Subsection 3.1, for the matrices V and B generated by Algorithm 2, we have A≈VB. Premultiplying on both sides of A≈VB by YT1 yields

The SORQLP is described as in Algorithm 4.

We have the following remarks on the computational complexity of Algorithm 4.

Therefore, the total complexity of Algorithm 4 is

which is the same order of magnitude as the complexity of Algorithm 2. Similarly, considering the cost of data communication, the computation cost of Algorithm 4 is much cheaper than Algorithm 2.

In what follows, we assume that all Gaussian random matrices have full rank. We first recall some necessary lemmas.

[15] Let A∈Rm×n and let k and l be positive integers such that (1+1lnk)k<l<min{m,n}. If Ω∈Rn×l is a standard Gaussian random matrix, then there exists a matrix F∈Rl×n such that

where Q∈Rm×l has orthonormal columns and R∈Rl×l is upper triangular. Let

If ^Ω1 has full row rank, then

The following lemmas provide some inequalities about singular value, which are helpful to prove the main theorem related to the singular value approximation error of the proposed algorithms.

[10] Let A∈Rm×n. Suppose Q is a matrix with orthonormal columns. Then

The following theorem provides some bounds for the matrix approximation error of Algorithm 3 in the sense of 2-norm and Frobenius norm.

with probability not less than 1−e−a2m−e−c2l2−Δ, where

Firstly, we consider matrix approximation error in the 2-norm. From Algorithm 3 we have

The second term of the right hand side of (4.10) is reduced to

where the first equality follows from the fact that Ω2V has full column rank and thus (Ω2V)†Ω2V=I since Ω2V∈Rl2×l1(l2≥l1) is a Gaussian random matrix. Thus,

For the first term of the right hand side of (4.10), by using the triangular inequality, there exists a matrix F∈Rl1×n such that

with probability not less than 1−e−c2l1−e−a2n. Furthermore,

with probability not less than 1−e−c2l2. By Definition 2.2, we have

Next, we consider matrix approximation error in the Frobenius norm. By using the similar error analysis in the 2-norm we have

The second term of the right hand side of (4.21) is reduced to

where the first equality follows from the fact that the Gaussian matrix Ω2V has full column rank and thus (Ω2V)†Ω2V=I. Thus,

The following lemma gives a bound for the maximum singular value approximation error.