Tensor completion is a technique of filling missing elements of the incomplete data tensors. It being actively studied based on the convex optimization scheme such as nuclear-norm minimization. When given data tensors include some noises, the nuclear-norm minimization problem is usually converted to the nuclear-norm `regularization' problem which simultaneously minimize penalty and error terms with some trade-off parameter. However, the good value of trade-off is not easily determined because of the difference of two units and the data dependence. In the sense of trade-off tuning, the noisy tensor completion problem with the `noise inequality constraint' is better choice than the `regularization' because the good noise threshold can be easily bounded with noise standard deviation. In this study, we tackle to solve the convex tensor completion problems with two types of noise inequality constraints: Gaussian and Laplace distributions. The contributions of this study are follows: (1) New tensor completion and denoising models using tensor total variation and nuclear-norm are proposed which can be characterized as a generalization/extension of many past matrix and tensor completion models, (2) proximal mappings for noise inequalities are derived which are analytically computable with low computational complexity, (3) convex optimization algorithm is proposed based on primal-dual splitting framework, (4) new step-size adaptation method is proposed to accelerate the optimization, and (5) extensive experiments demonstrated the advantages of the proposed method for visual data retrieval such as for color images, movies, and 3D-volumetric data. 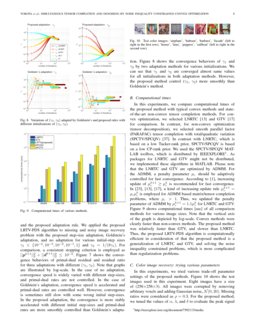 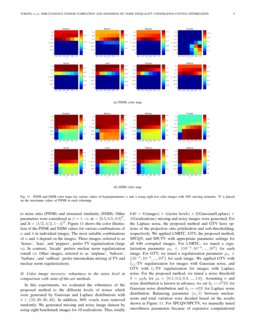 Many problems can be formulated as recovering a low-rank tensor. Althoug...
Ming Yuan, et al. ∙

Completion is a technique of filling missing elements of incomplete data using the values of reference (available) elements and the structural assumptions (priors) of data. We consider a general exact matrix/tensor completion problem as follows:

where T and X∈RI1×I2×⋯×IN are the input and output N-th order tensors, respectively, a cost function, f(⋅):RI1×I2×⋯×IN→R, is used to evaluate (prior) structural assumptions, with Q∈{0,1}I1×I2×⋯×IN is an index tensor that represents the missing and available elements of T as 0 and 1, respectively. A support set, Ω, is defined as Ω:={(i1,i2,...,iN) | qi1,i2,...,iN=1}. When the missing and available elements are independent, completion is impossible. However, most real-world data have a few redundant properties that can be used for completion, such as symmetry, repetition, and sparsity. When the cost function f is convex and proximable, Problem (1) can be solved by convex optimization methods such as alternating direction method of multipliers (ADMM) [3] and primal-dual splitting (hybrid gradient) (PDS/PDHG) method [10]. In this paper, we refer to PDS/PDHG as PDS for simple. For example, Problem (1

Next, we consider an ‘inexact’ matrix/tensor completion problem as follows:

where DΩ(X,T) is a distance measure between X and T, and μ

is a trade-off parameter between a prior and a distance term. We refer to this as ‘Lagrange form’. When we assume Gaussian distribution for a noise model, Problem (

Here, we consider ‘inequality form’ of Problem (2) as follow:

In this study, we propose a new optimization algorithm based on PDS [10] for convex optimization problems consisting of proximable functions and noise inequality constraints. For this purpose, we derive that the proximal mappings of noise inequality constraints based on Gaussian and Laplace distributions, which are not trivial, can be obtained using analytical calculation. Furthermore, to accelerate the optimization, we propose a new step-size adaptation method for PDS algorithm. For application, we define the cost function as a composition of tensor nuclear-norm and generalized TV, and conduct extensive experiments to show the advantages of the proposed methods.

Note that this work is an extension of prior study presented in conferences [36, 35]. The new contributions in this study are as follows: A generalized formulation and detailed explanation of the proposed models, derivation of a new proximal mapping for Laplace noise inequality, applying a new step-size adaptation method for acceleration, and additional experiments.

The remainder of this paper is organized as follows: In Section II, prior studies on matrix and tensor completion methods are reviewed. In Sections III and IV, we propose a new model for tensor completion based on low rank and TV, and its optimization algorithm using a PDS approach. In Section V, we demonstrate the advantages of the proposed method over selected state-of-the-art methods using color images, movies, and 3D-volumetric images. Lastly, we state the conclusions in Section VI.

The notations used in this paper follow several rules. A vector, a matrix, and a tensor are denoted by a bold lowercase letter,

Ii Review of prior works in matrix and tensor completion

First, we consider a matrix completion problem as follow:

where σi(Z) is the i

In [5], a noisy case has been discussed as

To solve Problem (6), an algorithm has been proposed, which requires solving

. As iterative calculations of singular value decomposition are required to solve Problem (

7) [26], the algorithm is computationally expensive. We refer to this algorithm as low-rank matrix completion with noise (LRMCn).

There are several studies about applications of image deblurring, denoising, and interpolation

When N≥3 in (1), it is not a simple extension of matrix completion because of special properties of tensors. For example, there are two types of ranks in tensors, i.e., the canonical polyadic (CP) rank and Tucker rank [22]. As the CP rank has several difficult properties, low Tucker-rank based completion is relatively well studied.

where λn≥0 (∀n) represents the weight parameters for individual tensor modes, and X(n)∈RIn×∏k≠nIk is the n-th mode unfolded matrix of tensor X. ADMM [3] has been employed for its minimization problem. Furthermore, its noisy scenario has been discussed in [13], which is formulated as Problem (2) with the tensor nuclear norm. We refer to this method as low n-rank tensor completion (LNRTC).

In [17], a case of Problem (2), in which the cost function is given by generalized TV (GTV) has been discussed, where GTV is defined by the sum of the generalized matrix TV of individual mode-unfolded matrices of a tensor as

where wn≥0 (∀n) represents the weight parameters for individual tensor modes, and ||Z||GTV for matrix Z∈RI×J is a GTV-norm, which is defined by

Note that we can consider a more simple, straightforward, and isotropic tensorial extension of matrix TV, which is defined by

In this section, we propose a new model for tensor completion and denoising using a tensor nuclear norm and TV simultaneously. The proposed optimization problem is given by

where 0≤α≤1 and β:=1−α are the weight parameters between the TV and nuclear norm terms, and the first constraint in (15) imposes all values of the output tensor to be included in a range, [vmin,vmax]. The first and second constraints are convex and these indicator functions are given by

Using iv(X) and iδ(X), tensor completion problem (15) can be rewritten as

As these four functions are not differentiable, traditional gradient-based optimization algorithms, e.g., the Newton method, cannot be applied. In Section IV, we introduce and apply an efficient approach, referred to as PDS, to solve proposed optimization problem (15).

Iii-a Characterization of the proposed model

First, when N=2, α=0, β=1, λ=[1,0]T, vmin=−∞, and vmax=∞, the proposed model can be characterized as LRMCn [5]. In contrast with LRMCn, which solves several convex optimization problems to tune μ, the proposed method can obtain its solution by solving only one convex optimization problem, and provides its tensorial extension. Moreover, proposed model includes Laplace distribution as noise model unlike LRMCn.

δ instead of μ.

Additionally, our model differs from a recent work proposed in [21] because it applies some constrained fixed-rank matrix factorization models into individual mode-matricization of a same tensor in noiseless scenario. The problem is non-convex and it is not designed for a noise reduction model.

where f:Rn→R and h:Rm→R are general convex functions, and L∈Rm×n is a linear operator (matrix). From the definition of convex conjugate:

the following saddle-point problem can be derived

For optimality of (ˆx,ˆy), at least the following conditions are satisfied:

where ∂ stands for sub-gradient of functions, and we consider primal and dual residual vectors as some p and d, respectively.

Based on sub-gradient descent/ascent method, natural update rules are given by

where Δxk∈LTyk+∂f(xk) and Δyk∈Lxk+1−∂h∗(yk) are update directions, and γ1 and γ2 are step size parameters.

When f and h are proximable functions, proximal gradient method can be introduced as

where proximal mapping is defined by

Note that let us put z∗=proxλg[z], then we have

where θ∈[0,1] is a some scalar. Usually, θ=1 is chosen because that the fast convergence O(1/N) of θ=1 is theoretically proved in contrast to O(1/√N) of θ=0 [8]. Therefore, Formulations (30)-(31) are recognized as a standard version of PDS method, currently. Nonetheless, Arrow-Hurwicz method is practically competitive with standard PDS method that a experimental report exists in [8].

Update rule (31) can be rewritten by

If proximal mapping of h∗ is more difficult to calculate or derive than that of h, then update rule (33)-(34) is a convenient choice to implement.

Thus, PDS can be applied into many convex optimization problems that the proximal mappings of f and h are given as analytically computable operations. Furthermore, above formulation can be easily extended into the composite optimization of multiple convex functions hj(Ljx) [10].

Note that the l2,1-norm, the nuclear norm, and iv are clearly proximable functions whose calculations are given by

where s=[s1,...,sI]T∈RI with si=max(1−γ||zi||2,0) for Z=[z1,z2,...,zI]T∈RI×J, and (U,Σ,V) are the left, center-diagonal, and right matrices, respectively, of the singular value decomposition of Z. Proximal mappings of iδ with Gaussian and Laplace noise models are provided by Sections IV-C and IV-D.

In this section, we consider the following problem:

Focusing on the elements qi1,i2,...,iN=1, the optimization problem is given as

where ˜Q=max(0,1−η)Q. Clearly, this computational complexity is linear with respect to the size of tensor X.

In this section, we consider the following problem:

Focusing on the elements qi1,i2,...,iN=1, the optimization problem is given as

The solution of (48) is given by a projection of zq on the polyhedron with center tq, or the zq that is in that polyhedron (see Fig. 4). However, it can not be calculated analytically unlike Gaussian noise model. Generally, it is resolved by linear search problem. Let us consider Lagrange form of (48) as

then the solution of (49) can be given by soft-thresholding:

Finally, the solution of (48) is given as x∗q=ˆxτ∗.

Next, we show an efficient algorithm to solve (51). The computational complexity of the proposed algorithm is only O(|Ω|log|Ω|) for sorting. First, the constraint in (51) can be rewritten by

Next, we consider the sorting of hi as

In general, for τ=hjk+1, the left part can be calculated by

Fig. 6 helps us to understand above formulations. We have H0≥H1≥H2≥⋯≥H|Ω|=0. Thus, we can find k′ that satisfies Hk′≥δ≥Hk′+1 by linear computational complexity of O(|Ω|). Finally, optimal value of τ can be given by

From the theory of fixed point algorithm, global convergence of PDS method with sufficiently small step-size has been proven [12, 8, 19]. However, small step-size leads usually slow convergence, and optimal step-size may not be constant, i.e., it may adaptively change in optimization process. Furthermore, appropriate balance between primal and dual step-size parameters is not trivial. To tackle this issue, Goldstein et al. has been proposed a nice adaptation rule of primal-dual step-size parameters in 2015 [15]. By inheriting and improving Goldstein’s rule work, we proposed a new step-size adaptation rule.

where α∈[0,1), and η∈(0,1). Moreover, to prevent too large step-size, a backtracking condition is defined as

In contrast that Goldstein’s rule balances the primal and dual step-sizes based on inequality condition, the proposed rule is based on primal-dual ratio Rk+1:=||pk+1||2||dk</sp