The electroencephalography (EEG) source imaging problem is very sensitive to the electrical modelling of the skull of the patient under examination. Unfortunately, the currently available EEG devices and their embedded software do not take this into account; instead, it is common to use a literature-based skull conductivity parameter. In this paper, we propose a statistical method based on the Bayesian approximation error approach to compensate for source imaging errors due to the unknown skull conductivity and, simultaneously, to compute a low-order estimate for the actual skull conductivity value. By using simulated EEG data that corresponds to focal source activity, we demonstrate the potential of the method to reconstruct the underlying focal sources and low-order errors induced by the unknown skull conductivity. Subsequently, the estimated errors are used to approximate the skull conductivity. The results indicate clear improvements in the source localization accuracy and feasible skull conductivity estimates. 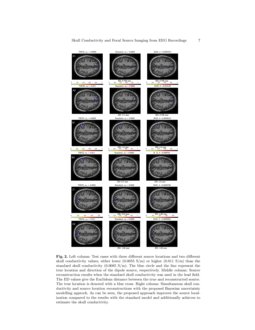 We consider the reconstruction of a heterogeneous coefficient field in a...
Ruanui Nicholson, et al. ∙

The estimation of the focal brain activity from electroencephalography (EEG) data is an ill-posed inverse problem, and the solution depends strongly on the accuracy of the head model, particularly the used skull conductivity value [1, 2]. The skull conductivity value can be calibrated by using well defined somatosensory evoked potentials / fields in combination with EEG [3], combined EEG/MEG [4] or by using electrical impedance tomography (EIT) -based techniques [5]. However, these methods are sometimes unreliable, computationally effortful and may require auxiliary imaging tools.

In our previous studies [6, 7], we demonstrated a more straightforward approach that was based on uncertainty modelling via the Bayesian approximation error (BAE) approach [8]

. With BAE, the natural variability of the skull conductivity was modelled in a probability distribution, and subsequently its effects on the EEG data were taken statistically into account in the observation model (likelihood) with the help of an additive modelling error term. This allowed us to use an approximate skull conductivity in the EEG source imaging, i.e. to neglect the calibration step completely, and still get feasible source configuration estimates.

In this paper, we demonstrate with simulations that in addition to the source configuration the Bayesian uncertainty modelling also allows simultaneous estimation of the unknown skull conductivity. This estimation can be carried out through a low order decomposition of the modelling error term [8, 9].

We envision that the proposed approach could be used as such, or alternatively as a calibration step to determine the skull conductivity of a patient. The benefit compared to current injection -based techniques is that it relies solely on EEG data and thus avoids the requirement for a brain rest period before the actual EEG examination. In addition, this approach does not add computational effort (to the regular source imaging) since it does not involve non-linear formulations or unstable matrix inversions [3, 10]; instead, all the required pre-computations can be performed off-line before any experiments take place.

The computational domain is denoted with Ω and its electric conductivity with σ(x) where x∈Ω. The numerical observation model is

where v∈Rm are the measurements, m is the number of measurements, A(σ)∈Rm×2n is the (2-dimensional) lead field matrix that depends on σ, d∈R2n is the distributed dipole source configuration and e∼N(e∗,Γe) is the measurement noise. Note that here the model A(σ) assumes (unrealistically) that the accurate values of electric conductivities are known.

In the Bayesian framework, the inverse solution is the posterior density

For the model (1), the likelihood can be written as

is the induced approximation error, ε∈Rm.

In order to approximate the unknown skull conductivity, we need to obtain an estimate about the approximation error. Similarly as in [9, 8], we express ε as a linear combination of basis functions. Numerically, the estimation of ε

Γε=E[(ε−ε∗)(ε−ε∗)T]. In particular, Γε can be decomposed according to

are the eigenvectors of

Γε. Based on this decomposition, we have that ε−ε∗∈span{w1,…,wk}.

The approximation error can be expressed as

Thus, the observation model (4) can be rewritten as

For the simultaneous estimation of d and α, we have to construct the posterior model π(d,α|v). To obtain a computationally efficient solution, we make the technical approximation that (d,α,e,ε′′) are mutually Gaussian and uncorrelated [9, 8]. Then, we obtain the approximate likelihood

where Γε′′=Σmp+1λjwjwTj. Based on the eigenvalue decomposition and the Gaussian approximations, we have that the coefficients α

are normally distributed with zero mean and covariance

A 2-dimensional finite element (FE) -based three compartment (scalp, skull and brain) head model with 32 electrodes was used in the demonstrations (see, Figure 1). For the forward simulations and inverse estimations two different meshes with 2518 and 1780 nodes were constructed, respectively, with source spaces covering the gray matter of the brain.

drawn from a Gaussian distribution

3.2 Computation of the approximation error statistics

The samples for the error statistics at location i were created by first choosing randomly one of the sample head models and evaluating both the sample model and the standard model with the same single dipole source d(s)i, i.e.

A set of S=1000 single radial dipole samples d(s)i with varying amplitudes were drawn from a Gaussian distribution π(di) with mean 1 and standard deviation 0.01, and 200 different leadfield matrices were used to estimate the error statistics at location i. Superscript j=s+S(k−1) where s=1,…,S and k=1,…K. The mean εi∗ and error covariance Γεi at location i were

Samples α(j)i and ε′′(j)i were evaluated according to α(j)i=WTi(ε(j)i−εi∗) and ε′′(j)i=QiQTi(ε(j)i−εi∗), where Wi and Qi were matrices with columns the first p and remaining eigenvectors of Γεi respectively.

In this work, we compute the maximum a posteriori (MAP) estimates of the posterior (10). Since we study only single dipole source cases, we can use a modified single dipole scan algorithm and solve

where n is the total number of source locations, Ai0=[Ai0xAi0y] are the columns of the (standard) leadfield matrix corresponding to location i, ^di=(dxi,dyi) is the dipole reconstructed at location i, Wi∈Rm×p are the basis functions obtained from the eigenvalue decomposition of the error covariance Γεi∈Rm×m, αi∈Rp are the reconstructed coefficients for these basis functions, and Lαi=12diag(λ−11,λ−12,...,λ−1p) where λ parameters are the eigenvalues of the covariance Γεi (12). The number of α parameters, as well as, the number of eigenvalues (used in the estimates) was defined based on the minimum value p that satisfied ∑pk=1λk∑mk=1λk≥0.85. In most cases, either one or two λ parameters were needed.

The solution is the pair

where i=l is the location that gives the lowest value for the functional (14).

Given the dipole location l, the approximation error (5) can be written as

The skull conductivity can now be estimated by maximizing

where σ and dl are mutually independent.

From equation (15), we have that ∫π(αl|σ,dl)π(dl)ddl=∫δ(Wlαl−[Al(σ)−Al0]dl)π(dl)ddl=1|f−1l(σ)|πdl(fl(σ)αl) where the subscript dl is used to clarify that this is the probability density of dl, and the expression fl(σ) formally comes from the inversion of the lead field matrix difference and multiplication with Wl. So, π(σ|αl)∝π(σ)1|f−1l(σ)|πdl(fl(σ)αl). Even though π(σ) an πdl(.) have been modelled as Gaussian distributions, the non-linearity with respect to σ and often the infeasibility of estimating fl(σ) can prohibit a straightforward σ estimation. Instead we can use π(σ|αl)∝π(σ,αl).

, the joint distribution of

σ and αl can be approximated as Gaussian, and therefore the MAP estimate (16) gives

where ^αl is the solution of problem (14), σ∗ is the mean value of the postulated skull conductivity distribution, Γσαl is the cross-covariance between σ and αl (estimated using samples α(j)l and σ(k) as described in section 3.2), and Γαl=diag(λ1,…,λp) where λp are the first p eigenvalues of the sampled-based error covariance Γεl (12).

model that had either skull conductivity 0.0055 or 0.011 S/m, a single radial dipole source, and signal to noise ratio 30 dB. In Figure

In our analysis the head geometry was considered fully known; however, it can also be taken into account as an uncertainty [14]. We also note that in this work we estimated a single conductivity value for the whole skull. As a next step, we plan to use the proposed approach in conjugation with other optimization techniques [15, 16] to produce more detailed skull conductivity maps.

We have demonstrated that with the help of the Bayesian uncertainty modeling the EEG source imaging problem could be reformulated in such a way that it allows to estimate, simultaneously with the source configuration, a low-order approximation for the modelling error. With the help of this modelling error estimate, the underlying skull conductivity could be reconstructed.

This project has received funding from the ATTRACT project funded by the EC under Grant Agreement 777222 and from the Academy of Finland post-doctoral program (project no. 316542).

The authors declare that they have no conflicts of interest.