Photoacoustic tomography seeks to reconstruct an acoustic initial pressure distribution from the measurement of the ultrasound waveforms. Conventional methods assume a-prior knowledge of the sound speed distribution, which practically is unknown. One way to circumvent the issue is to simultaneously reconstruct both the acoustic initial pressure and speed. In this article, we develop a novel data-driven method that integrates an advanced deep neural network through model-based iteration. The image of the initial pressure is significantly improved in our numerical simulation. 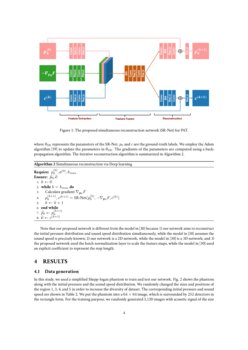 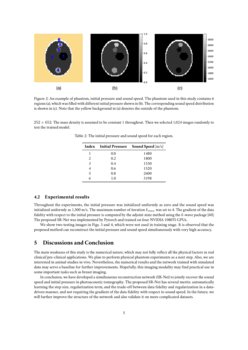 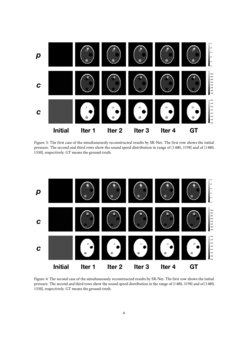 In this article, we are concerned with a nonlinear inverse problem with ...
Gyeongha Hwang, et al. ∙

We propose the Siamese-flute method that measures the breath pressure an...
Daniel Chin, et al. ∙

Photoacoustic tomography (PAT) is an emerging non-invasive modality that has manifested an enormous prospect for clinical practices [1]. In PAT, the tissue is illuminated with near-infrared light of wavelength 650-900nm. The absorbed optical energy is transformed into acoustic energy through the photoacoustic effect, and the generated ultrasound is measured by transducer arrays around the tissue in order to retrieve the optical internal properties. The coupling mechanism of the optical and ultrasound waves gives multiple advantages over conventional standalone modalities. For instance, the acoustic wave experiences less scattering in tissue compared to optical wave, allowing PAT to break the optical diffusion limit and generate high-resolution images [2] while preserving intrinsic optical contrast [3].

Typical photo-acoustic signal generation comprises three steps: (1) the tissue absorbs light; (2) the absorbed optical energy heats the tissue and raises the temperature; (3) thermo-elastic expansion occurs and generates ultrasound. The image formation in PAT is to recover the distribution of the deposited energy, known as the local optical fluence, from the ultrasound signals that are recorded by the sensors deployed around the tissue. As the initial ultrasound pressure is approximately proportional to the optical fluence, it is sufficient to reconstruct the initial pressure from the recorded ultrasound signals. Conventional reconstructive schemes, such as back-projection based methods [4, 5, 6, 7, 8, 9, 10, 11] and time-reversal based methods [12, 13, 14, 15, 16, 17, 18, 19, 20, 21, 22, 23, 24], typically assume the sound speed is precisely known. This assumption however is not always fulfilled, and the precise sound speed distribution is often unknown. It is therefore of practical significance to study simultaneous reconstruction of both the sound speed distribution and the acoustic initial pressure.

[25, 26]. The powerful computational capacity of modern super computers has enabled these methods to enhance medical image reconstruction by extracting the hidden patterns in the data that would otherwise be lost. In PAT, data driven methods have achieved state-of-the-art results in PAT image reconstruction in the scenarios of sparse data  [27, 28, 29], limited view [30, 31, 32], artifacts removal [33, 34, 35], as well as other applications [36, 37, 38]. In addition to PAT, data-driven approaches have also found broad application in the image reconstruction of many other imaging modalities such as Computed Tomography (CT), Magnetic Resonance Imaging (MRI), as well as other related fields like radiomics and radiotheraphy, see [39, 40, 41, 42, 43, 44, 45, 46, 47, 48, 49, 50] for some examples and applications along these directions.

In this section, we formulate the mathematical model of the simultaneous reconstruction problem in PAT and review the recent advances based on model-driven approaches.

Propagation of ultrasound in PAT is typically modeled as an initial value problem for the wave equation. This can be written as

where d=2,3 is the dimension, u is the acoustic velocity, p is the acoustic pressure, T>0 is the stoppage time of the measurement, ρ is the mass density, c is the sound speed, and p0 is the initial pressure distribution. We remark that another popular model in PAT is to deal with the second order acoustic equation rather than the above first order system. These models are more or less equivalent under suitable assumptions.

Let Ω be a bounded domain in Rd representing the tissue, with the boundary of Ω denoted by ∂Ω. The measurement in PAT is the detected ultrasound signals, that is the temporal boundary data p|[0,T]×∂Ω. We further introduce a measurement map Λ which is defined as

where p is the solution of (1). Assuming the mass density ρ is known, then the simultaneous reconstruction problem in PAT can be recast as the inverse problem to recover the pair (c,p0) from p|[0,T]×∂Ω; in other words, to invert the operator Λ. Note that Λ is linear in p0 but non-linear in c.

We recall some known results regarding the simultaneous reconstruction in PAT. Linearization of the map (2) at sufficiently smooth pairs is studied in [51] and the linearized inversion is shown to be unstable in any scale of Sobolev spaces. Invertibility of Λ is established in [52]

for radially symmetric sound speeds in any odd dimension higher than three; in

[53, 54] for sound speeds that satisfy certain orthogonality relation with harmonic functions. Numerical simulations have been implemented in [55] using the finite element model, and in [56, 57, 58] for parametrized sound speeds.

Our data-driven approach is inspired by the work of Matthews et al. [56], where the authors proposed a direct optimization approach towards the simultaneous reconstruction, with the sound speed being confined in a parametrized lower-dimensional space. We denote the measurement by g for simplicity. With slight abuse of notations, the discretized versions of p0 and c are still denoted by themselves, which are two matrices. For a fixed sound speed c, the operator Λ(c,⋅) is linear, hence its discretization is another matrix, say H(c). The idea in [56] is to minimize the objective function

We describe our data-driven method in this section. The motivation stems from some limitations of the iterative algorithm 1. For instance, repeated selection of step sizes to update the initial pressure and sound speed is time-consuming; selection of the parameter β and the regularization term R is highly empirically; tuning β can be tedious. To overcome these limitations, we propose a simultaneous reconstruction network (SR-Net) to update the initial pressure and the sound speed for each iteration.

The proposed SR-Net is shown in Fig. 1

A detailed network structure is shown in Table 1

. Note that zero-padding is used such that all feature maps have the same as the inputs. For each iteration, we trained SR-Net using the simulated dataset. At the

-th iteration, the loss function is chosen as follows:

In this study, we used a simplified Shepp-logan phantom to train and test our network. Fig. 2 shows the phantom along with the initial pressure and the sound speed distribution. We randomly changed the sizes and positions of the region 1, 3, 4, and 5 in order to increase the diversity of dataset. The corresponding initial pressure and sound speed are shown in Table 2. We put the phantom into a 64×64 image, which is surrounded by 252 detectors in the rectangle form. For the training purpose, we randomly generated 5,120 images with acoustic signal of the size 252×652. The mass density is assumed to be constant 1 throughout. Then we selected 1,024 images randomly to test the trained model.

. The proposed SR-Net was implemented by Pytorch and trained on four NVIDIA 1080Ti GPUs.

We show two testing images in Figs. 3 and 4, which were not used in training stage. It is observed that the proposed method can reconstruct the initial pressure and sound speed simultaneously with very high accuracy.

The main weakness of this study is the numerical nature, which may not fully reflect all the physical factors in real clinical/pre-clinical applications. We plan to perform physical phantom experiments as a next step. Also, we are interested in animal studies in vivo. Nevertheless, the numerical results and the network trained with simulated data may serve a baseline for further improvements. Hopefully, this imaging modality may find practical use in some important tasks such as breast imaging.

In conclusion, we have developed a simultaneous reconstruction network (SR-Net) to jointly recover the sound speed and initial pressure in photoacoustic tomography. The proposed SR-Net has several merits: automatically learning the step size, regularization term, and the trade-off between data fidelity and regularization in a data-driven manner, and not requiring the gradient of the data fidelity with respect to sound speed. In the future, we will further improve the structure of the network and also validate it on more complicated datasets.

The research of Y. Yang is partly supported by the NSF grant DMS-1715178, the AMS-Simons travel grant, and the startup fund from Michigan State University. The authors would like to thank NVIDIA Corporation for the donation of GPU used for this research.