Optimization of neural network (NN) significantly influenced by the transfer function used in its active nodes. It has been observed that the homogeneity in the activation nodes does not provide the best solution. Therefore, the customizable transfer functions whose underlying parameters are subjected to optimization were used to provide heterogeneity to NN. For the experimental purpose, a meta-heuristic framework using a combined genotype representation of connection weights and transfer function parameter was used. The performance of adaptive Logistic, Tangent-hyperbolic, Gaussian and Beta functions were analyzed. In present research work, concise comparisons between different transfer function and between the NN optimization algorithms are presented. The comprehensive analysis of the results obtained over the benchmark dataset suggests that the Artificial Bee Colony with adaptive transfer function provides the best results in terms of classification accuracy over the particle swarm optimization and differential evolution. 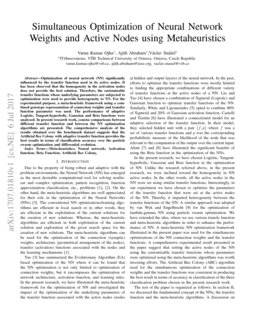 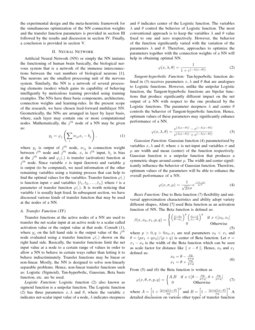 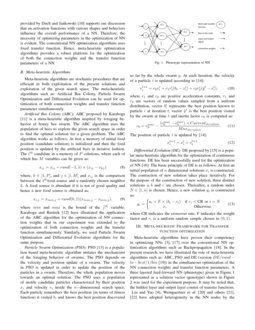 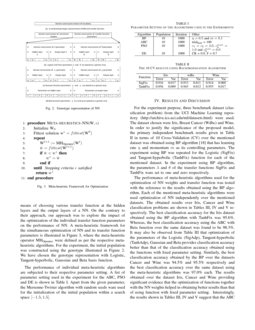 Due to the property of being robust and adaptive with the problem environments, the Neural Network (NN) has emerged as the most desirable computational tool for solving nonlinear and complex optimization, pattern recognition, function approximation classification, etc., problems

[4] have chosen a combination of Sigmoid (Logistic) and Gaussian function to optimize transfer functions of the NN. Similarly, White and Ligomenides [5] opted to combine 80% of Sigmoid and 20% of Gaussian activation function. Castelli and Trentin [6] have illustrated a connectionist model for an adaptive selection of the transfer function. In their model, they selected hidden unit with a pair {f,p} where f was a set of various transfer functions and p was the corresponding probabilistic measure of the likelihood of the node that was relevant to the computation of the output over the current input. Alimi [7] and [8] have illustrated the significant benefits of using the Beta function in the optimization of the NNs.

The rest of the paper is organized as follows: In section II, we discussed the fundamental concept of the NNs, the transfer function and the meta-heuristic algorithms. A discussion on the experimental design and the meta-heuristic framework for the simultaneous optimization of the NN connection weights and the transfer function parameters is provided in section III followed by the results and discussion in section IV. Finally, a conclusion is provided in section V.

Artificial Neural Network (NN) or simply the NN imitates the functioning of human brain basically, the biological nervous system that is a network of the immense interconnections between the vast numbers of biological neurons

[1]. The neurons are the smallest processing unit of the nervous system. Similarly, the NN is a network of several processing elements (nodes) which gains its capability of behaving intelligently by meticulous training provided using training examples. The NNs have three basic components, architecture, connection weights and learning-rules. In the present scope of the research, we have chosen feed-forward multilayer NN. Geometrically, the NNs are arranged in layer by layer basis, where, each layer may contain one or more computational nodes. Mathematically, the jth node of a NN may be given as:

where yj is output of jth node, wij is connection weight between ith node and jth node, xi is ith input, bj is bias at the jth node and φj(.) is transfer (activation) function at jth node. Since variable x is input (known) and variable y is output (to be computed), we need information of the other remaining variables using a training process that can help to find the optimal values for the variables. Transfer function φ(.) is function input x and variables {t1,t2,…,tn} where t is a parameter of transfer function φ(.). It is worth noticing that variable t is usually kept fixed. In subsequent section, we have discussed various kinds of transfer function that may be used at the nodes of a NN.

) also known as sigmoid function is a unipolar function. The Logistic function (

2) has three parameters x,λ and θ, where the variable x indicates net-scalar input value of a node, λ indicates steepness and θ indicates center of the Logistic function. The variables λ and θ control the behavior of Logistic function. The most conventional approach is to keep the variables λ and θ value fixed to one and zero respectively. However, the behavior of the function significantly varied with the variation of the parameters λ and θ. Therefore, approaches to optimize the parameters together with the connection weights of a NN will help in obtaining optimal NN.

Basis Function: Due to Beta function (7) flexibility and universal approximation characteristics and ability adopt variety different shapes, Alimi [7] used Beta function as an activation function of NN. The Beta function is defined as:

Meta-heuristic algorithms are stochastic procedures that are efficient in both exploitation of the present solutions and exploration of the given search space. The meta-heuristic algorithms such as: Artificial Bee Colony, Particle Swarm Optimization and Differential Evolution can be used for optimization of both connection weights and transfer function parameter simultaneously.

Artificial Bee Colony (ABC): ABC proposed by Karaboga [11] is a meta-heuristic algorithm inspired by foraging behavior of honey bee swarm. The ABC algorithm uses the population of bees to explore the given search space in order to find the optimal solution for a given problem. The ABC algorithm works as follows: At first a memory of initial food position (candidate solution) is initialized and then the food position is updated by the artificial bees in iterative fashion. The ith candidate in a memory of P solutions, where each of which has M variables can be given as:

where, k∈[1,P], and j∈[i,M] and xij is the comparison between the ithfood source and a randomly chosen neighbor k. A food source is abundant if it is not of good quality and hence a new food source is obtained as:

Particle Swarm Optimization (PSO): PSO [13] is a population based meta-heuristic algorithm imitates the mechanisms of the foraging behavior of swarms. The PSO depends on the velocity and position update of a swarm. The velocity in PSO is updated in order to update the position of the particles in a swarm. Therefore, the whole population moves towards an optimal solution. The PSO uses a population of motile candidate particles characterized by their position xi and velocity vi inside the n−dimensional search space. Each particle remembers the best position (in terms of fitness function) it visited bi and knows the best position discovered so far by the whole swarm g. At each iteration, the velocity of a particle i is updated according to [14]:

where c1 and c2 are positive acceleration constants, r1 and r2

are vectors of random values sampled from a uniform distribution, vector

The position of particle i is updated by [14]:

Differential Evolution (DE): DE proposed by [15] is a popular meta-heuristic algorithm for the optimization of continuous functions. DE has been successfully used for the optimization of NN [16]. The basic principle of DE is as follows: At first an initial population of n dimensional solutions xi is constructed. The contraction of new solution takes place iteratively. For the purpose of the construction of new solution, three distinct solutions a,b and c are chosen. Thereafter, a random index N∈[1,n] is chosen. Hence, a new solution yi is constructed as:

Meta-heuristic algorithms have proven their competency in optimizing NNs [3, 17]

over the conventional NN optimization algorithms such as Backpropagation

[18]. In the present research, we have illustrated the role of meta-heuristic algorithms such as: ABC, PSO and DE (version DE/rand−to−best/1/bin [19]) in the simultaneous optimization of the NN connection weights and transfer function parameters. A three layered feed-forward NN (phenotype) given in Figure 1 represented as a solution vector (genotype) shown in Figure 2 was used for the experiment purpose. It may be noted that, the hidden layer and output layer consist of transfer functions.

Liu and Yao [4], Weingaertner et al. [20] and others [21, 22] have adopted heterogeneity in the NN nodes by the means of choosing various transfer function at the hidden layers and the output layers of a NN. On the contrary to their approach, our approach was to explore the impact of the optimization of the individual transfer function parameters on the performance of NN. A meta-heuristic framework for the simultaneous optimization of NN and its transfer function parameters is illustrated in Figure 3, where the meta-heuristic operator MHOperator were defined as per the respective meta-heuristic algorithms. For the experiment, the initial population was constructed using the genotype illustrated in Figure 2. We have chosen the genotype representation with Logistic, Tangent-hyperbolic, Gaussian and Beta basis function.

The performance of individual meta-heuristic algorithms are subjected to their respective parameter setting. A list of parameter setting used in the experiment for the ABC, PSO and DE is shown in Table I. Apart from the given parameter, the Mersenne-Twister algorithm with random seeds ware used for the initialization of the initial population within a search space [−1.5,1.5].

http://archive.ics.uci.edu/ml/datasets.html) were used. The dataset chosen were Iris, Breast Cancer (Wdbc) and Wine. In order to justify the significance of the proposed model, the primary independent benchmark results given in Table II in terms of 10 Cross-Validation (CV) over the mentioned dataset was obtained using BP algorithm [18] that has learning rate η and momentum m as its controlling parameters. The experiment using BP was repeated for the Logistic (SigFix) and Tangent-hyperbolic (TanhFix) function for each of the mentioned dataset. In the experiment using BP algorithm, the parameters λ and θ of the transfer functions SigFix and TanhFix ware set to one and zero respectively.

Interestingly, the results shown in Tables III, IV and V suggest that the ABC algorithm excels over the other meta-heuristic algorithms such as PSO and DE in the present experiment design with their respective parameter setting mentioned in Table I. However the algorithms PSO and DE have more performance tuning parameters than the ABC. Hence, their performance are subjected to meticulous tuning of their respective parameters. In contrast to van Wyk and Engelbrecht [9], we have performed experiments for the optimized parameters of Tangent-hyperbolic, Gaussian, and Beta function and the results suggests that performance of other adaptive transfer function are better than that of sigmoid function. Similarly, we have used ABC algorithms that performs better than that of PSO algorithm.

In present research, we have presented a meta-heuristic framework for the simultaneous optimization of the NN weights and the parameters of the transfer functions (NN-TFs model). Various types of transfer functions were chosen for the purpose of the rigorous analysis of the influence of the transfer functions optimization together with the NN weights. For the optimization of NN-TFs model, ABC, PSO and DE algorithm were used. Apart from the meta-heuristic algorithms, a Back-propagation algorithm was used for the comprehensive comparison and validation of the significance of the NN-TFs model. The comprehensive results presented in the paper suggests that the adaptive/customizable transfer function helps in enhancing the performance of NN. It may also be observed that the Beta function have four parameters and it is competitive to the Tangent-hyperbolic function that has two controlling parameters. Hence, further examination and tuning of its parameters may offer the best results in comparison to its counterparts. Apart from this, a probabilistic setting for the heterogeneity at the active nodes will be interesting to analyze. From the obtained results, it may also be observed that the ABC excels significantly over the other meta-heuristic such as particle swarm optimization in the present form of their parameter setting.

This work was supported by the IPROCOM Marie Curie initial training network, funded through the People Programme (Marie Curie Actions) of the European Union’s Seventh Framework Programme FP7/2007-2013/ under REA grant agreement No. 316555.