Simulation of Random Variables under Rényi Divergence Measures of All Orders 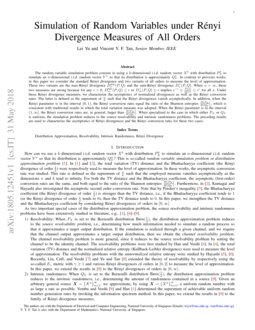 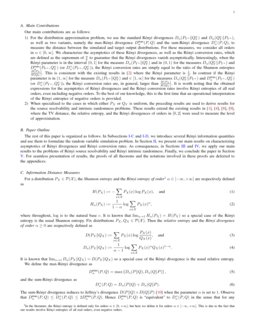 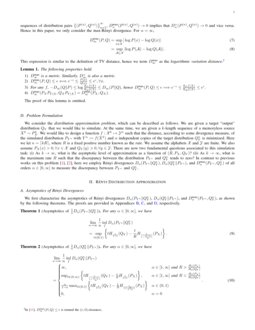 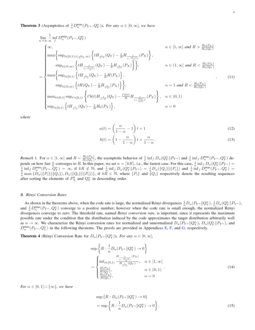 For a given d-dimensional distribution function (df) H we introduce the ...
Enkelejd Hashorva, et al. ∙

Beyond the Central Limit Theorem: Universal and Non-universal Simulations of Random Variables by General Mappings

We consider zero-sum repeated games in which the players are restricted ...
Mehrdad Valizadeh, et al. ∙

As two important special cases of the distribution approximation problem, the source resolvability and intrinsic randomness problems have been extensively studied in the literature, e.g., [4, 5, 6, 7, 8, 9, 1].

The rest of this paper is organized as follows. In Subsections I-C and I-D, we introduce several Rényi information quantities and use them to formulate the random variable simulation problem. In Section II, we present our main results on characterizing asymptotics of Rényi divergences and Rényi conversion rates. As consequences, in Sections III and IV, we apply our main results to the problems of Rényi source resolvability and Rényi intrinsic randomness. Finally, we conclude the paper in Section V. For seamless presentation of results, the proofs of all theorems and the notations involved in these proofs are deferred to the appendices.

The set of probability measures on

For brevity, sometimes we use T(x,y)

to denote the joint distributions

The ϵ-typical set of QX is denoted as

The conditionally ϵ-typical set of QXY is denoted as

For a distribution PX∈P(X), the mode entropy222Here the concept of “mode entropy” is consistent with the concept of “mode” in statistics. This is because, in statistics, the mode of a set of data values is the value that appears most often. On the other hand, for a product set supp(PX)n, the type class TTX with type TX≈Unif(supp(PX)) has more elements than any other type class, and under the product distribution PnX, the probability values of sequences in the type class TTX is e−nHu(PX). Hence, under the product distribution PnX, the probability value e−nHu(PX) is the mode of the data values (PnX(xn)>0:xn∈Xn). is defined as

The mode entropy is also known as the cross (Shannon) entropy between Unif(supp(PX)) and PX. For a distribution PX∈P(X) and α∈[−∞,∞], the α-tilted distribution is defined as

and the α-tilted cross entropy is defined as

and the Rényi divergence of order α=0,1,+∞ is defined as the limit by taking α→0,1,+∞, respectively. It is known that

Hence the usual relative entropy is a special case of the Rényi divergence.

We define the max-Rényi divergence as

and the sum-Rényi divergence as

This expression is similar to the definition of TV distance, hence we term Dmax∞ as the logarithmic variation distance.333In [13], Dmax∞(P,Q)≤ϵ is termed the (ϵ,0)-closeness.

The proof of this lemma is omitted.

We consider the distribution approximation problem, which can be described as follows. We are given a target “output” distribution QY that we would like to simulate. At the same time, we are given a k-length sequence of a memoryless source Xk∼PkX. We would like to design a function f:Xk→Yn such that the distance, according to some divergence measure, of the simulated distribution PYn with Yn:=f(Xk) and n independent copies of the target distribution QnY is minimized. Here we let n=⌈kR⌉, where R is a fixed positive number known as the rate. We assume the alphabets X and Y are finite. We also assume PX(x)>0,∀x∈X and QY(y)>0,∀y∈Y, i.e., X and Y are the supports of PX and QY, respectively. There are now two fundamental questions associated to this simulation task: (i) As k→∞, what is the asymptotic level of approximation as a function of (R,PX,QY)? (ii) As k→∞, what is the maximum rate R such that the discrepancy between the distribution PYn and QnY tends to zero? In contrast to previous works on this problem [1, 2], here we employ Rényi divergences Dα(PYn∥QnY),Dα(QnY∥PYn), and Dmaxα(PYn,QnY) of all orders α∈[0,∞] to measure the discrepancy between PYn and QnY.

Furthermore, our results are summarized in Table I.

The following two fundamental mappings, illustrated in Fig. 1, will be used in our constructions of the functions f:Xk→Yn described in Subsection I-D.

We first characterize the asymptotics of Rényi divergences Dα(PYn∥QnY), Dα(QnY∥PYn), and Dmaxα(PYn,QnY), as shown by the following theorems.