The COVID-19 pandemic has highlighted the importance of in-silico epidemiological modelling in predicting the dynamics of infectious diseases to inform health policy and decision makers about suitable prevention and containment strategies. Work in this setting involves solving challenging inference and control problems in individual-based models of ever increasing complexity. Here we discuss recent breakthroughs in machine learning, specifically in simulation-based inference, and explore its potential as a novel venue for model calibration to support the design and evaluation of public health interventions. To further stimulate research, we are developing software interfaces that turn two cornerstone COVID-19 and malaria epidemiology models COVID-sim, (https://github.com/mrc-ide/covid-sim/) and OpenMalaria (https://github.com/SwissTPH/openmalaria) into probabilistic programs, enabling efficient interpretable Bayesian inference within those simulators. 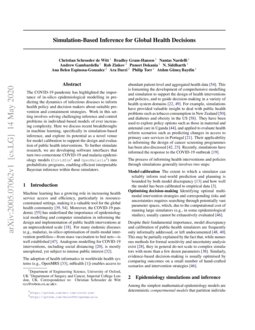 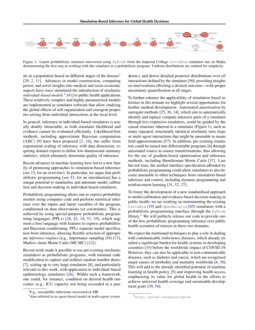 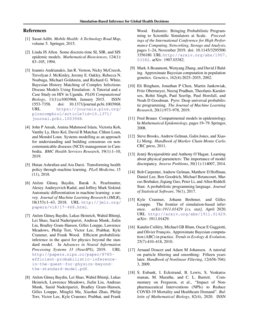 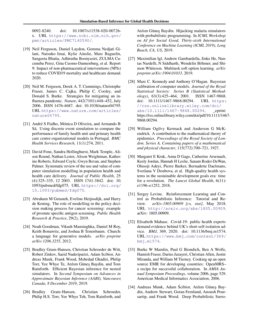 The adoption of health informatics in worldwide health systems (e.g., OpenMRS [Mamlin et al., 2006], mHealth [Adibi, 2015]) enables access to abundant patient-level and aggregated health data [Wahl et al., 2018]. This is fomenting the development of comprehensive modelling and simulation to support the design of health interventions and policies, and to guide decision-making in a variety of health system domains [Fone et al., 2003, Swanson et al., 2012]. For example, simulations have provided valuable insight to deal with public health problems such as tobacco consumption in New Zealand [Tobias et al., 2010], and diabetes and obesity in the US [Zhang et al., 2014]. They have been used to explore policy options such as those in maternal and antenatal care in Uganda [Semwanga et al., 2016], and applied to evaluate health reform scenarios such as predicting changes in access to primary care services in Portugal [Fialho et al., 2011]. Their applicability in informing the design of cancer screening programmes has been also discussed [Ronco and Baussano, 2017, Getaneh et al., 2019]. Recently, simulations have informed the response to the COVID-19 outbreak [Ferguson et al., 2020].

The extent to which a simulator can reliably inform real-world prediction and planning is bounded by both model discrepancy [Brynjarsdóttir and O’Hagan, 2014] and how well the model has been calibrated to empirical data [Andrianakis et al., 2015].

Despite their fundamental importance, model discrepancy and calibration of public-health simulators are frequently only informally addressed, or left undocumented [Stout et al., 2009, Punyacharoensin et al., 2011]. This may be partially explained by the fact that, while numerous methods for formal sensitivity and uncertainty analysis exist [Kennedy and O’Hagan, 2001], they in general do not scale to complex simulators with more than a few dozen parameters [Oakley and O’Hagan, 2004]. Similarly, evidence-based decision-making is usually optimised by comparing outcomes on a small number of hand-crafted scenarios and intervention strategies [Smith et al., 2012].

Among the simplest mathematical epidemiology models are deterministic compartmental models that partition individuals in a population based on different stages of the disease333E.g., susceptible–infectious–recovered or SIR [Kermack and McKendrick, 1927, Allen, 1994, Brauer, 2008]. Advances in model construction, computing power, and novel insights into medical and socio-economic aspects have since stimulated the introduction of stochastic individual-based models 444Also referred to as agent-based model or multi-agent system. [Railsback and Grimm, 2019] to public health applications. These relatively complex and highly-parametrised models are implemented as simulator software that allow studying the global effects of self-organization and emergent properties arising from individual interactions at the local level.

Recent advances in machine learning have led to a new family of promising approaches to simulation-based inference [see Cranmer et al., 2020, for an overview]. In particular, we argue that probabilistic programming [see van de Meent et al., 2018, for an introduction] has a unique potential to standardise and automate model calibration and decision-making in individual-based simulators.

Recent work made it possible to use pre-existing stochastic simulators as probabilistic programs, with minimal code modification to capture and redirect random number draws [Baydin et al., 2019], scaling up to very large simulators [Baydin et al., 2019], and particularly relevant to this work, with application to individual-based epidemiology simulators [Gram-Hansen et al., 2019b]. Within such a framework, one could, for instance, condition on desired health outcomes (e.g., ICU capacity not being exceeded in a pandemic), and derive detailed posterior distributions over all interactions defined by the simulator [Wood et al., 2020], providing insights on interventions effecting a desired outcome—with proper uncertainty quantification at all stages.

To further enhance the applicability of simulation-based inference in this domain we highlight several opportunities for further method development. Automated amortisation by surrogate methods [Gram-Hansen et al., 2019a, Naderiparizi et al., 2019, Munk et al., 2019], which aim to automatically identify and replace compute-intensive parts of a simulator through less expensive emulators, could be guided by the causal structure inherent to a simulator (Figure 1), such as many repeated, structurally identical stochastic time steps or multi-agent interactions that might be amenable to mean-field approximations [Yang et al., 2018]. In addition, pre-existing simulators could be turned into differentiable programs [Baydin et al., 2018] through automated source-to-source transformations, thus allowing for the use of gradient-based optimisation and inference methods, including Hamiltonian Monte Carlo [Neal, 2012]

. Last but not least, the unified interface specification afforded by probabilistic programming could allow simulators to also become amenable to other techniques from simulation-based inference and control, including dynamic programming and reinforcement learning

To foster the development of a new standardised approach to model calibration and evidence-based decision-making in public health, we are working on instrumenting the existing CovidSim [Ferguson et al., 2020] and OpenMalaria [Smith et al., 2006] simulators with a probabilistic programming interface through the PyProb library.555https://github.com/pyprob/pyprob We will publicly release our code to provide out-of-the-box probabilistic programming inference over public health scenarios of interest in these two domains.

We expect the mentioned techniques to play a role in dealing with communicable (infectious) diseases, which already entailed a significant burden for health systems in developing countries [Murray et al., 2014] before the worldwide impact of COVID-19. However, they can also be applicable to non-communicable diseases, such as diabetes and cancer, which are recognised major causes of morbidity and mortality worldwide [Ansah et al., 2019, Kruk et al., 2018]. This will add to the already identified potential of machine learning in health policy [Ashrafian and Darzi, 2018] and improving health access, emphasising its value for global health in the efforts to achieve universal health coverage and sustainable development goals [Panch et al., 2018, Wahl et al., 2018].