In the context of multicriteria decision making, the ordered weighted averaging (OWA) functions play a crucial role in aggregating multiple criteria evaluations into an overall assessment supporting the decision makers' choice. Determining OWA weights, therefore, is an essential part of this process. Available methods for determining OWA weights, however, often require heavy computational loads in real-life large-scale optimization problems. In this paper, we propose a new approach to simplify the well-known minimax disparity model for determining OWA weights. For this purpose, we use to the binomial decomposition framework in which natural constraints can be imposed on the level of complexity of the weight distribution. The original problem of determining OWA weights is thereby transformed into a smaller scale optimization problem, formulated in terms of the coefficients in the binomial decomposition. Our preliminary results show that a small set of these coefficients can encode for an appropriate full-dimensional set of OWA weights. 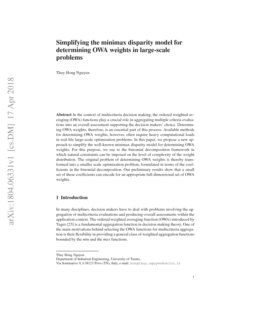 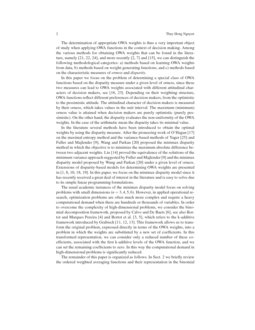 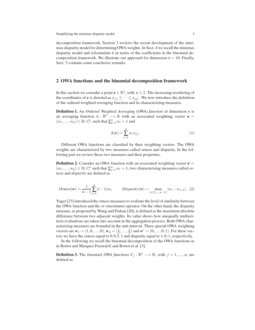 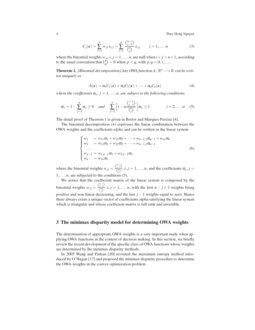 In this paper, we constructed a model to determine weights of criterias ...
Jon JaeGyong, et al. ∙

We consider a setting where an agent's uncertainty is represented by a s...
Joseph Y. Halpern, et al. ∙

In this paper we introduce a class of operators on complete lattices cal...
Antonio Diego S. Farias, et al. ∙

In many disciplines, decision makers have to deal with problems involving the aggregation of multicriteria evaluations and producing overall assessments within the application context. The ordered weighted averaging function (OWA) introduced by Yager Yager-1988 is a fundamental aggregation function in decision making theory. One of the main motivations behind selecting the OWA functions for multicriteria aggregation is their flexibility in providing a general class of weighted aggregation functions bounded by the min and the max functions.

The determination of appropriate OWA weights is thus a very important object of study when applying OWA functions in the context of decision making. Among the various methods for obtaining OWA weights that can be found in the literature, namely Xu-2005 ; Xu-2003 ; Yager-1993 , and more recently Beliakov-BustinceSola-Calvo-2016 ; Carlsson-Fuller-2018 and Liu-2011 , we can distinguish the following methodological categories: a) methods based on learning OWA weights from data, b) methods based on weight-generating functions, and c) methods based on the characteristic measures of orness and disparity.

In this paper we focus on the problem of determining a special class of OWA functions based on the disparity measure under a given level of orness, since these two measures can lead to OWA weights associated with different attitudinal characters of decision makers, see Mezei-Brunelli-2017 ; Yager-1988 . Depending on their weighting structure, OWA functions reflect different preferences of decision makers, from the optimistic to the pessimistic attitude. The attitudinal character of decision makers is measured by their orness, which takes values in the unit interval. The maximum (minimum) orness value is attained when decision makers are purely optimistic (purely pessimistic). On the other hand, the disparity evaluates the non-uniformity of the OWA weights. In the case of the arithmetic mean the disparity takes its minimal value.

In the literature several methods have been introduced to obtain the optimal weights by using the disparity measure. After the pioneering work of O’Hagan OHagan-1988

Yager-IJUFKBS-1996 and Fuller and Majlender Fuller-Majlender-2003 , Wang and Parkan Wang-Parkan-2005 proposed the minimax disparity method in which the objective is to minimize the maximum absolute difference between two adjacent weights. Liu Liu-2007 proved the equivalence of the solutions of the minimum variance approach suggested by Fuller and Majlender Fuller-Majlender-2003 and the minimax disparity model proposed by Wang and Parkan Wang-Parkan-2005 under a given level of orness. Extensions of disparity-based models for determining OWA weights are presented in Amin-Emrouznejad-2006 ; Emrouznejad-Amin-2010 ; Gong-Dai-Hu-2016 ; Sang-Liu-2014 ; Wang-Luo-Hua-2007

. In this paper, we focus on the minimax disparity model since it has recently received a great deal of interest in the literature and is easy to solve due to its simple linear programming formulations.

The usual academic instances of the minimax disparity model focus on solving problems with small dimensions (n=3,4,5,6). However, in applied operational research, optimization problems are often much more complex and require a heavy computational demand when there are hundreds or thousands of variables. In order to overcome the complexity of high-dimensional problems, we consider the binomial decomposition framework, proposed by Calvo and De Baets Calvo-DeBaets-1998 , see also Bortot and Marques Pereira Bortot-MarquesPereira-2014 and Bortot et al. Bortot-Fedrizzi-MarquesPereira-Thuy-2017 ; Bortot-MarquesPereira-Thuy-2017 , which refers to the k-additive framework introduced by Grabisch Grabisch-1997b ; Grabisch-1997c ; Grabisch-1997a . This framework allows us to transform the original problem, expressed directly in terms of the OWA weights, into a problem in which the weights are substituted by a new set of coefficients. In this transformed representation, we can consider only a reduced number of these coefficients, associated with the first k-additive levels of the OWA function, and we can set the remaining coefficients to zero. In this way the computational demand in high-dimensional problems is significantly reduced.

The remainder of this paper is organized as follows. In Sect. 2 we briefly review the ordered weighted averaging functions and their representation in the binomial decomposition framework. Section 3 reviews the recent development of the minimax disparity model for determining OWA weights. In Sect. 4 we recall the minimax disparity model and reformulate it in terms of the coefficients in the binomial decomposition framework. We illustrate our approach for dimension n=10. Finally, Sect. 5 contains some conclusive remarks.

In this section we consider a point \emph{x}∈Rn, with n≥2. The increasing reordering of the coordinates of x is denoted as x(1)≤⋯≤x(n) . We now introduce the definition of the ordered weighted averaging function and its characterizing measures.

with an associated weighting vector

Different OWA functions are classified by their weighting vectors. The OWA weights are characterized by two measures called orness and disparity. In the following part we review these two measures and their properties.

Consider an OWA function with an associated weighting vector \emph{w}=(w1,…,wn)∈[0,1]n such that ∑ni=1wi =1, two characterizing measures called orness and disparity are defined as

Yager Yager-1988 introduced the orness measures to evaluate the level of similarity between the OWA function and the or (maximum) operator. On the other hand, the disparity measure, as proposed by Wang and Parkan Wang-Parkan-2005 , is defined as the maximum absolute difference between two adjacent weights. Its value shows how unequally multicriteria evaluations are taken into account in the aggregation process. Both OWA characterizing measures are bounded in the unit interval. Three special OWA weighting vectors are \emph{w}∗=(1,0,…,0), \emph{w}A=(1n,…,1n) and \emph{w}∗=(0,…,0,1). For these vectors we have the orness equal to 0,0.5,1 and disparity equal to 1,0,1, respectively.

In the following we recall the binomial decomposition of the OWA functions as in Bortot and Marques PereiraBortot-MarquesPereira-2014 and Bortot et al. Bortot-Fedrizzi-MarquesPereira-Thuy-2017 .

The binomial OWA functions Cj:Rn⟶R, with j=1,…,n, are defined as

[Binomial decomposition] Any OWA function A:Rn⟶R can be written uniquely as

where the coefficients αj, j=1,…,n, are subject to the following conditions,

The detail proof of Theorem 2.1 is given in Bortot and Marques Pereira Bortot-MarquesPereira-2014 .

The determination of appropriate OWA weights is a very important study when applying OWA functions in the context of decision making. In this section, we briefly review the recent development of the specific class of OWA functions whose weights are determined by the minimax disparity methods.

where 0≤η≤1 stands for the orness of the weighting vector.

The objective function is non-linear due to its formulation encompassing the absolute difference between two adjacent weights. In order to overcome this non-linearity, the authors introduced a new variable called δ=maxi∈{1,…,n−1}|wi−wi+1| to denote the maximum absolute difference between two adjacent weights. This expression is rewritten equivalently by two inequations wi−wi+1−δ≤0 and wi−wi+1+δ≥0. The original optimization problem is thereby reformulated into the linear programming problem

where 0≤η≤1 stands for the orness of the weighting vector.

The formulation (8) is easy to solve in practice due to its linearity. Many researchers, therefore, revisited this method and suggested numerous extensions Amin-Emrouznejad-2006 ; Emrouznejad-Amin-2010 ; Gong-Dai-Hu-2016 ; Sang-Liu-2014 ; Wang-Luo-Hua-2007 . In particular Liu Liu-2007 proved the equivalence of the solutions of the minimax disparity model and the minimum variance method suggested by Fuller and Majlender Fuller-Majlender-2003 .

4 The minimax disparity model and the binomial decomposition

In Sect. 3, we have reviewed minimax disparity methods for determining OWA weights. The empirical results in those methods are carried out in the small dimensions n=3,4,5,6. In real-life problems, we usually encounter large-scale optimization problems. One of the challenges that clearly emerges from the above methods in large-scale problems is that the optimization problems formulated directly in terms of the OWA weights require high computational resources. Our objective is to improve the minimax disparity methods for determining OWA weights in high-dimensional problems.

In order to reduce the prohibitive complexity of the optimization problems, we recall the work of Bortot and Marques Pereira Bortot-MarquesPereira-2014 . According to the authors, any OWA function can be decomposed uniquely into a linear combination of the binomial coefficients α1,…,αn and the binomial OWA functions C1,…,Cn, and can be written as A(\emph{x})=α1C1(\emph{x})+α2C2(\emph{x})+…+αnCn(\emph{x}), as described in Sect. 2. The positive aspect of the binomial decomposition framework is the k-additive levels in which a certain number of coefficients α1,…,αk are used in the process of OWA weights determination while the remaining coefficients are set to zero. When the information of the coefficients alpha is available, we can reconstruct the OWA weights due to their one-to-one correspondence. In this way the computational demand in high-dimensional problems is significantly reduced.

We now transform the minimax disparity model (8) into a problem in which the weights are substituted by a set of coefficients αj,j=1,…,n,

where 0≤η≤1 stands for the orness of the weighting vector. Notice that the first and the last constraints in our model (9) correspond to the boundary and the monotonicity conditions of the OWA weighting vector \emph{w}=(w1,...,wn)∈[0,1]n with ∑ni=1wi=1.

In the following we report the empirical results with respect to dimension n=10 and k-additive level is equal to n (Table 1). We notice that a number of coefficients alpha are used is significantly reduced in our model for the central orness values 0.3,0.4,0.5,0.6 and 0.7. In these cases, two non-zero coefficients α1 and α2 are able to reconstruct the full-dimension set of OWA weights while the remaining coefficients are zero. In the remaining cases of orness values, a larger number of coefficients alpha is required to generate the OWA weights. As an example, we consider our proposed model with the orness value equal to 0.2. If the k-additive level increases from 3 to 10, we obtain better objective values as expected (see Fig. 1). However it is evident that k=7 leads to the best trade-off between the accuracy of the optimal value and the dimensionality reduction of the optimization problem.

Moreover, in Table 1, we observe that the coefficients alpha associated with orness value 0,0.5 and 1 are respectively:

This study proposes a new methodology for determining OWA weights in large-scale optimization problems where the cost of computation of optimal weights is very high. Our model allows the optimization of the OWA weights to be transformed into the optimization of the coefficients in the binomial decomposition framework, considering the k-additive levels in order to reduce the complexity of the proposed model. The empirical result shows that a small set of the coefficients in the binomial decomposition can model a the full-dimensional set of the OWA weights.

However, there are still some issues that need to be addressed in future research. For instance, it is necessary to develop an algorithm to identify which k-additive level in the set {1,…,n} gives the best trade off between accuracy and computational complexity according to the specific applications. It would also be interesting to perform a sensitivity analysis of the coefficients in the binomial decomposition with respect to the OWA weights.

Acknowledgements   The author would like to thank Ricardo Alberto Marques Pereira and Silvia Bortot for their helpful remarks on the manuscript.