Estimates of the approximate factor model are increasingly used in empirical work. Their theoretical properties, studied some twenty years ago, also laid the ground work for analysis on large dimensional panel data models with cross-section dependence. This paper presents simplified proofs for the estimates by using alternative rotation matrices, exploiting properties of low rank matrices, as well as the singular value decomposition of the data in addition to its covariance structure. These simplifications facilitate interpretation of results and provide a more friendly introduction to researchers new to the field. New results are provided to allow linear restrictions to be imposed on factor models. 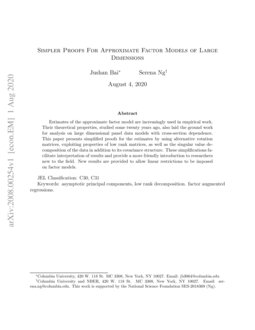 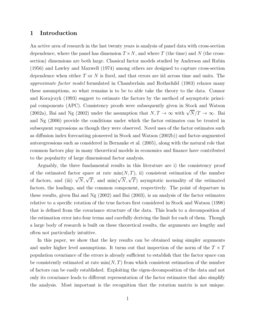 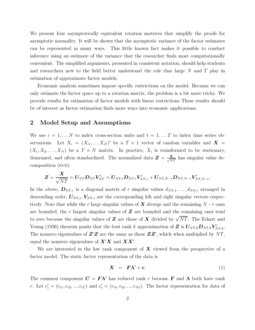 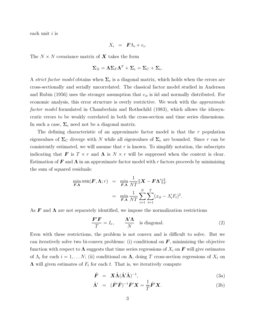 An active area of research in the last twenty years is analysis of panel data with cross-section dependence, where the panel has dimension T×N, and where T (the time) and N (the cross-section) dimensions are both large. Classical factor models studied by Anderson and Rubin (1956) and Lawley and Maxwell (1974) among others are designed to capture cross-section dependence when either T or N is fixed, and that errors are iid across time and units. The approximate factor model formulated in Chamberlain and Rothschild (1983) relaxes many these assumptions, so what remains is to be to able take the theory to the data. Connor and Korajczyk (1993) suggest to estimate the factors by the method of asymptotic principal components (APC). Consistency proofs were subsequently given in Stock and Watson (2002a), Bai and Ng (2002) under the assumption that N,T→∞ with √N/T→∞. Bai and Ng (2006) provide the conditions under which the factor estimates can be treated in subsequent regressions as though they were observed. Novel uses of the factor estimates such as diffusion index forecasting pioneered in Stock and Watson (2002b)) and factor-augmented autoregressions such as considered in Bernanke et al. (2005), along with the natural role that common factors play in many theoretical models in economics and finance have contributed to the popularity of large dimensional factor analysis.

Arguably, the three fundamental results in this literature are i) the consistency proof of the estimated factor space at rate min(N,T), ii) consistent estimation of the number of factors, and (iii) √N,√T, and min(√N,√T) asymptotic normality of the estimated factors, the loadings, and the common component, respectively. The point of departure in these results, given Bai and Ng (2002) and Bai (2003), is an analysis of the factor estimates relative to a specific rotation of the true factors first considered in Stock and Watson (1998) that is defined from the covariance structure of the data. This leads to a decomposition of the estimation error into four terms and carefully deriving the limit for each of them. Though a large body of research is built on these theoretical results, the arguments are lengthy and often not particularly intuitive.

In this paper, we show that the key results can be obtained using simpler arguments and under higher level assumptions. It turns out that inspection of the norm of the T×T population covariance of the errors is already sufficient to establish that the factor space can be consistently estimated at rate min(N,T)

from which consistent estimation of the number of factors can be easily established. Exploiting the eigen-decomposition of the data and not only its covariance leads to different representation of the factor estimates that also simplify the analysis. Most important is the recognition that the rotation matrix is not unique. We present four asymptotically equivalent rotation matrices that simplify the proofs for asymptotic normality. It will be shown that the asymptotic variance of the factor estimates can be represented in many ways. This little known fact makes it possible to conduct inference using an estimate of the variance that the researcher finds most computationally convenient. The simplified arguments, presented in consistent notation, should help students and researchers new to the field better understand the role that large

N and T play in estimation of approximate factor models.

Economic analysis sometimes impose specific restrictions on the model. Because we can only estimate the factor space up to a rotation matrix, the problem is a bit more tricky. We provide results for estimation of factor models with linear restrictions These results should be of interest as factor estimation finds more ways into economic applications.

We use i=1,…N to index cross-section units and t=1,…T to index time series observations. Let Xi=(Xi1,…XiT)′ be a T×1vector of random variables and X=(X1,X2,…,XN) be a T×N matrix. In practice, Xi is transformed to be stationary, demeaned, and often standardized. The normalized data Z=X√NT has singular value decomposition (svd)

. The nonzero eigenvalues of

Z′Z are the same as those ZZ′, which when multiplied by NT, equal the nonzero eigenvalues of X′X and XX′.

We are interested in the low rank component of X viewed from the perspective of a factor model. The static factor representation of the data is

The N×N covariance matrix of X takes the form

A strict factor model obtains when Σe is a diagonal matrix, which holds when the errors are cross-sectionally and serially uncorrelated. The classical factor model studied in Anderson and Rubin (1956) uses the stronger assumption that eit

is iid and normally distributed. For economic analysis, this error structure is overly restrictive. We work with the

approximate factor model formulated in Chamberlain and Rothschild (1983), which allows the idiosyncratic errors to be weakly correlated in both the cross-section and time series dimensions. In such a case, Σe need not be a diagonal matrix.

The defining characteristic of an approximate factor model is that the r population eigenvalues of ΣC diverge with N while all eigenvalues of Σe are bounded. Since r can be consistently estimated, we will assume that r is known. To simplify notation, the subscripts indicating that F is T×r and Λ is N×r will be suppresed when the context is clear. Estimation of F and Λ in an approximate factor model with r factors proceeds by minimizing the sum of squared residuals:

As F and Λ are not separately identified, we impose the normalization restrictions

Even with these restrictions, the problem is not convex and is difficult to solve. But we can iteratively solve two bi-convex problems: (i) conditional on F, minimizing the objective function with respect to Λ suggests that time series regressions of Xi on F will give estimates of Λi for each i=1,…N; (ii) conditional on Λ, doing T cross-section regressions of Xt on Λ will given estimates of Ft for each t. That is, we iteratively compute

Evidently, the solution involves eigenvectors because the algoirthm is an implementation of ’orthogonal subspace iteration’ algorithm for computing eigenvectors,

Golub and Loan (2012, Algorithm 8.2). A related method is the ’alternating least squares’ developed in De Leeuw (2004) and refined in Unkel and Trendafilov (2010) that treats e as unknowns to be recovered. Provided that a low rank structure exists, the error bounds for these algorithms can be shown without probabilistic assumptions about F,Λ, and e. We will need these assumptions to obtain distribution theory, and will treat e as residuals rather than choice variables.

Analysis of the APC estimates in a setting of large N and large T must overcome two new challenges not present in the classical factor analysis of Anderson and Rubin (1956). The first pertains to the fact that the errors are now allowed to be cross-sectionally correlated. The second pertains to the fact that covariance matrix of X or X′ are of dimensions T×T and N×N respectively, which are of infinite dimensions when N and T are large. The asymptotic properties of the factor estimates were first studied in Stock and Watson (2002a); Bai and Ng (2002); Bai (2003). Though the theory is well developed, the derivations are quite involved.

In what follows, we will establish the properties of ~F and ~Λ using simpler proofs and under weaker assumptions than previously used. Throughout, we let

Unless otherwise stated, ∥A∥2 is understood to be the squared Frobenius norm of a m×n matrix A. That is, ∥A∥2=∥A∥2F=∑mi=1∑nj=1|Aij|2=Tr% (AA′). The factor model can also be represented as

A strict factor model assumes that E[ejtejs]=0 for s≠t. An approximate factor model relaxes this requirement.

Assumption A1 assumes mean independence and some moment conditions. Assumption A2 implies that

∥F0∥2/T=Op(1) and ∥Λ0∥2/N=Op(1), and that all r eigenvalues of Λ0′Λ0′ diverge at the same rate of N. The conditions ensure a strong factor structure which is needed for identification. Under Assumption A3, the following holds:

Lemma 1 establishes that the normalized sum of squared covariances of the errors is of stochastic order that depends on the size of the panel in both dimensions. The proof comes from observing that ee′ is a T×T matrix with ∑Nj=1ejtejs as its (t,s) entry. Thus

Various results will be obtained from this useful identity. Define the rotation matrix

Note that this is the transpose of the one defined in Bai and Ng (2002).

3.1 Consistent Estimation of the Factor Space

We want to establish that ~Ft is close to Ft and ~Λi is close to Λi in some well-defined sense. Multiplying D−2NT,r to both sides of (6) and using the definition of HNT,0, we have

Taking the norm on both sides. we have

Under Assumption A, the following holds in squared Frobenius norm

Part (i) of Proposition 1 says that the average squared deviation between ~F and the space spanned by the true factors will vanish at rate min(N,T), which is the smaller of the sample size in the two dimensions. This result corresponds to Theorem 1 of Bai and Ng (2002), but the argument is now simpler. It uses the fact that ∥F0∥2/T=Op(1) by Assumption A2, ∥~F∥2/T=r by normalization, ∥D2r∥=Op(1), 1T∥1NΛ0′e′∥2=Op(1N) from equation (5) and ∥1NTee′∥2=Op(1T)+Op(1N) by Lemma 1. Part (ii) follows by symmetry. Part (iii) does not depend on HNT,0 and is a consequence of (i) and (ii).

Part (i) is weaker than uniform convergence of ~Ft to F0t. However, this result is sufficient to validate many uses of ~Ft, the most important being consistent estimation of the number of factors, and being able to treat ~F as F0 in factor augmented regressions.

An important quantity in determining the properties of the factor estimates is ~F′F0/T.

The fourth term is also negligible because F0′ee′~FNT2=F0′ee′F0NT2HNT,0+F0′ee′(~F−F0H)NT2 and each term is negligible. This implies that

Now ¯ΥNT can be interpreted as the (non-normalized) eigenvectors of matrix ΣNT. These eigenvectors do not have unit length even asymptotically because ¯Υ′NT¯ΥNTp⟶D2r. We can define normalized eigenvectors ΥNT as ΥNT=¯ΥNTD−1NT,r so that Υ′NTΥNTp⟶Ir. Since Λ0′Λ0/Np⟶ΣΛ and F0′F0/Tp⟶ΣF, ΣNT converges to Σ=Σ1/2ΛΣFΣ1/2Λ. From ΣNTΥNT+op(1)=ΥNTD2NT,r, taking the limit yields ΣΥ=ΥD2r, where Υ is the limit of ΥNT (note that since the eigenvalues of Σ are distinct, Υ is unique up to a column sign change, depending the column sign of ~F). So D2r is the diagonal matrix consisting of the eigenvalues of Σ, and Υ is the matrix of eigenvectors with Υ′Υ=Ir. We have

is not, in general, an identity matrix. Proposition

2 implies two useful results for what is to follow:

As seen above, ~F is based on Ur, the left singular vectors of X

and thus all linear transformations of

Ur are also solutions. The following Lemma will be useful in establishing that HNT,0 has asymptotically equivalent representations.

We are now in a position to consider asymptotically equivalent rotation matrices:

Proof: Part (ii) follows from Proposition 2 that ~F′F0/Tp⟶Q. It remains to show that all alternative rotation matrices are asymptotically equivalent.

We begin with ℓ=1,3. Recall that D2NT,r is the matrix of eigenvalues of XX′NT associated with the eigenvectors ~F. Using the normalization ~F′~F=TIr, we have ~F′(XX′NT)~F=TD2NT,r. Substituting X=F0Λ0′+e into the above, we have

Next, left and right multiplying X=F0Λ0′+e by ~F′ and Λ0 respectively, dividing by NT, and using ~Λ=~F′X/T, we obtain