With language modeling becoming the popular base task for unsupervised representation learning in Natural Language Processing, it is important to come up with new architectures and techniques for faster and better training of language models. However, due to a peculiarity of languages – the larger the dataset, the higher the average number of times a word appears in that dataset – datasets of different sizes have very different properties. Architectures performing well on small datasets might not perform well on larger ones. For example, LSTM models perform well on WikiText-2 but poorly on WikiText-103, while Transformer models perform well on WikiText-103 but not on WikiText-2. For setups like architectural search, this is a challenge since it is prohibitively costly to run a search on the full dataset but it is not indicative to experiment on smaller ones. In this paper, we introduce SimpleBooks, a small dataset with the average word frequency as high as that of much larger ones. Created from 1,573 Gutenberg books with the highest ratio of word-level book length to vocabulary size, SimpleBooks contains 92M word-level tokens, on par with WikiText-103 (103M tokens), but has the vocabulary of 98K, a third of WikiText-103's. SimpleBooks can be downloaded from https://dldata-public.s3.us-east-2.amazonaws.com/simplebooks.zip. 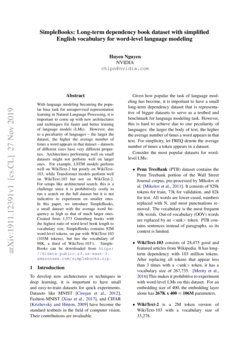 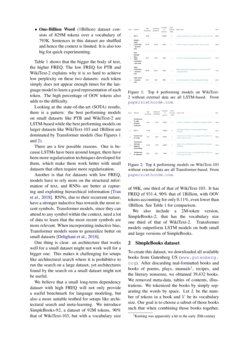 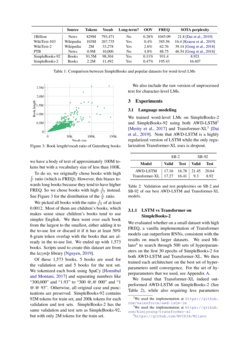 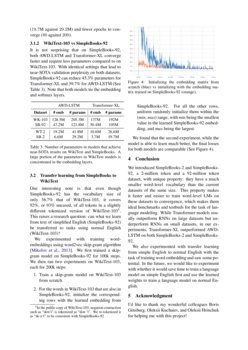 Fixed-vocabulary language models fail to account for one of the most cha...
Kazuya Kawakami, et al. ∙

Neutral evolution and turnover over centuries of English word popularity

No News is Good News: A Critique of the One Billion Word Benchmark

The One Billion Word Benchmark is a dataset derived from the WMT 2011 Ne...
Helen Ngo, et al. ∙

The unigram distribution is the non-contextual probability of finding a ...
Irene Nikkarinen, et al. ∙

Which transformer architecture fits my data? A vocabulary bottleneck in self-attention

To develop new architectures or techniques in deep learning, it is important to have small and easy-to-train datasets for quick experiments. Datasets like MNIST

have become the standard testbeds in the field of computer vision. Their contributions are invaluable.

Given how popular the task of language modeling has become, it is important to have a small long-term dependency dataset that is representative of bigger datasets to serve as a testbed and benchmark for language modeling task. However, this is hard to achieve due to one peculiarity of languages: the larger the body of text, the higher the average number of times a word appears in that text. For simplicity, let FREQ denote the average number of times a token appears in a dataset.

Consider the most popular datasets for word-level LMs:

Table 1 shows that the bigger the body of text, the higher FREQ. The low FREQ for PTB and WikiText-2 explains why it is so hard to achieve low perplexity on these two datasets: each token simply does not appear enough times for the language model to learn a good representation of each token. The high percentage of OOV tokens also adds to the difficulty.

Another is that for datasets with low FREQ, models have to rely more on the structural information of text, and RNNs are better at capturing and exploiting hierarchical information (Tran et al., 2018). RNNs, due to their recurrent nature, have a stronger inductive bias towards the most recent symbols. Transformer models, since they can attend to any symbol within the context, need a lot of data to learn that the most recent symbols are more relevant. When incorporating inductive bias, Transformer models seem to generalize better on small datasets (Dehghani et al., 2018).

We believe that a small long-term dependency dataset with high FREQ will not only provide a useful benchmark for language modeling, but also a more suitable testbed for setups like architectural search and meta-learning. We introduce SimpleBooks-92, a dataset of 92M tokens, 90% that of WikiText-103, but with a vocabulary size of 98K, one third of that of WikiText-103. It has FREQ of 931.4, 90% that of 1Billion, with OOV tokens accounting for only 0.11%, even lower than 1Billion. See Table 1 for comparison.

We also include a 2M-token version, SimpleBooks-2, that has the vocabulary size one third of that of WikiText-2. Transformer models outperform LSTM models on both small and large versions of SimpleBooks.

To create this dataset, we downloaded all available books from Gutenberg US (www.gutenberg.org). After discarding mal-formatted books and books of poems, plays, manuals111Knitting was apparently a hit in the early 20th century, recipes, and the literary nonsense, we obtained 39,432 books. We removed meta-data, tables of contents, illustrations. We tokenized the books by simply separating the words by space. Let L be the number of tokens in a book and V be its vocabulary size. Our goal is to choose a subset of those books such that when combining those books together, we have a body of text of approximately 100M tokens but with a vocabulary size of less than 100K.

We picked all books with the ratio LV2 of at least 0.0012. Most of them are children’s books, which makes sense since children’s books tend to use simpler English. We then went over each book from the largest to the smallest, either adding it to the to-use list or discard it if it has at least 50% 8-gram token overlap with the books that are already in the to-use list. We ended up with 1,573 books. Scripts used to create this dataset are from the lazynlp library (Nguyen, 2019).

We also include the raw version of unprocessed text for character-level LMs.

We trained word-level LMs on SimpleBooks-2 and SimpleBooks-92 using both AWD-LSTM222We used the implementation at https://github.com/salesforce/awd-lstm-lm (Merity et al., 2017) and Transformer-XL333We used the implementation at https://github.com/kimiyoung/transformer-xl (Dai et al., 2019). Note that AWD-LSTM is a highly regularized version of LSTM while the only regularization Transformer-XL uses is dropout.

3.1.1 LSTM vs Transformer on SimpleBooks-2

We evaluated whether on a small dataset with high FREQ, a vanilla implementation of Transformer models can outperform RNNs, consistent with the results on much larger datasets. We used Milano444https://github.com/NVIDIA/Milano

We found that Transformer-XL indeed outperformed AWD-LSTM on SimpleBooks-2 (See Table 2), while also requiring less parameters (19.7M against 29.2M) and fewer epochs to converge (80 against 200).

). Note that both models tie the embedding and softmax layers.

3.2 Transfer learning from SimpleBooks to WikiText

One interesting note is that even though SimpleBooks-92 has the vocabulary size of only 36.7% that of WikiText-103, it covers 92%, or 93% uncased, of all tokens in a slightly different tokenized version of WikiText-103555In the public copy of WikiText-103, negation contraction such as “don’t” is tokenized as “don ’t”. We re-tokenized it as “do n’t” to be consistent with SimpleBooks-92. This raises a research question: can what we learn from text of simplified English (SimpleBooks-92) be transferred to tasks using normal English (WikiText-103)?

We experimented with training word-embeddings using word2vec skip-gram algorithm (Mikolov et al., 2013). We first trained a skip-gram model on SimpleBooks-92 for 100k steps. We then ran two experiments on WikiText-103, each for 200k steps:

We found that the second experiment, while the model is able to learn much better, the final losses for both models are comparable (See Figure 4).

We introduced SimpleBooks-2 and SimpleBooks-92, a 2-million token and a 92-million token dataset, with unique property: they have a much smaller word-level vocabulary than the current datasets of the same size. This property makes it faster and easier to train word-level LMs on these datasets to convergence, which makes them ideal benchmarks and testbeds for the task of language modeling. While Transformer models usually outperform RNNs on large datasets but underperform RNNs on small datasets, in our experiments, Transformer-XL outperformed AWD-LSTM on both SimpleBooks-2 and SimpleBooks-92.

I’d like to thank my wonderful colleagues Boris Ginsburg, Oleksii Kuchaiev, and Oleksii Hrinchuk for helping me with this project!

Appendix A Hyperparameters used for training on SimpleBooks-2