Information theoretic feature selection aims to select a smallest feature subset such that the mutual information between the selected features and the class labels is maximized. Despite the simplicity of this objective, there still remains several open problems to optimize it. These include, for example, the automatic determination of the optimal subset size (i.e., the number of features) or a stopping criterion if the greedy searching strategy is adopted. In this letter, we suggest two stopping criteria by just monitoring the conditional mutual information (CMI) among groups of variables. Using the recently developed multivariate matrix-based Renyi's α-entropy functional, we show that the CMI among groups of variables can be easily estimated without any decomposition or approximation, hence making our criteria easily implemented and seamlessly integrated into any existing information theoretic feature selection methods with greedy search strategy. 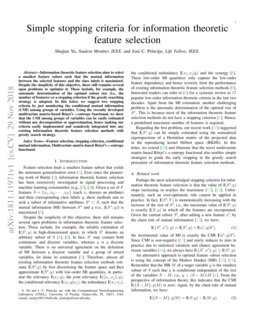 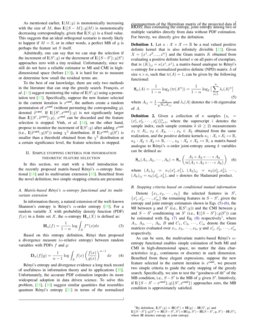 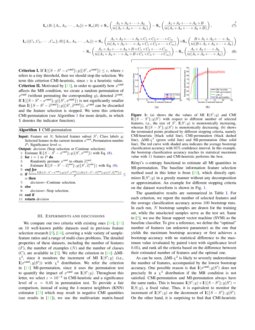 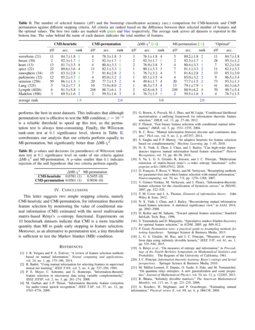 Feature selection is one of the most fundamental problems in machine lea...
Shuyang Gao, et al. ∙

Ranking by Dependence - A Fair Criteria

Learning to Explain: An Information-Theoretic Perspective on Model Interpretation

We introduce instancewise feature selection as a methodology for model i...
Jianbo Chen, et al. ∙

Feature selection, in the context of machine learning, is the process of...
Catuscia Palamidessi, et al. ∙

Feature selection finds a smallest feature subset that yields the minimum generalization error [1]. Ever since the pioneering work of Battiti [2]

[3, 4]). Given a set of F features S={x1,x2,⋯,xF} (each xi denotes an attribute) and their corresponding class labels y, these methods aim to seek a subset of informative attributes S⋆⊂S, such that the mutual information (MI) between S⋆ and y (i.e., I(S⋆;y)) is maximized [5].

Regarding the first problem, our recent work [10] suggested that I(S′;y) can be simply estimated using the normalized eigenspectrum of a Hermitian matrix of the projected data in the reproducing kernel Hilbert space (RKHS). In this letter, we extend [10] and illustrate that the novel multivariate matrix-based Rényi’s α-entropy functional also enables simple strategies to guide the early stopping in the greedy search procedure of information theoretic feature selection methods.

Perhaps the most acknowledged stopping criterion for information theoretic feature selection is that the value of I(S′;y) stops increasing or reaches the maximum [11, 12]. Unfortunately, such an over-optimistic rule cannot be applied in practice. In fact, I(S′;Y) is monotonically increasing with the increase of the size of S′, i.e., the maximum value of I(S′;y) is exactly I(S;y) in which all the features are incorporated. Given the current subset S′, after adding a new feature x′

, by the chain rule of mutual information

the incremental value of MI is exactly the CMI I(x′;y|S′). Since CMI is non-negative [13] and rarely reduces to zero in practice due to statistical variation and chance agreement between variables [14], we always have I({S′,x′};y)≥I(S′;y).

An alternative approach to optimal feature subset selection is using the concept of the Markov blanket (MB) [15, 16]. Remember that the MB M of a target variable y is the smallest subset of S such that y is conditional independent of the rest of the variables S−M, i.e., y⊥(S−M)|M [1]. From the perspective of information theory, this indicates that the CMI I({S−M};y|M) is zero. Again, by the chain rule of mutual information, we have:

As mentioned earlier, I(M;y) is monotonically increasing with the size of M, thus I({S−M};y|M) is monotonically decreasing correspondingly, given that I(S;y) is a fixed value. This suggests that an ideal orthogonal scenario is mostly likely to happen if M=S, or in other words, a perfect MB of y is perhaps the feature set S itself.

Admittedly, one can say that we can stop the selection if the increment of I(S′;y) or the decrement of I({S−S′};y|S′) approaches zero with a tiny residual. Unfortunately, since we still do not have a reliable estimator to MI and CMI in high-dimensional space (before [10]), it is hard for us to measure or determine how small the residual terms are.

To the best of our knowledge, there are only two methods in the literature that can stop the greedy search. François, et al. [11] suggest monitoring the value of I(S′;y) using a permutation test [17]. Specifically, suppose the new feature selected in the current iteration is xcand, the authors create a random permutation of xcand (without permuting the corresponding y), denoted ˜xcand. If I({S′,xcand};y) is not significantly larger than I({S′,˜xcand};y), xcand can be discarded and the feature selection is stopped. Vinh, et al. [14], on the other hand, propose to monitor the increment of I(S′;y) after adding xcand (i.e., I(˜xcand;y|S′)) using χ2 distribution. If I(xcand;y|S′) is smaller than a threshold obtained from the χ2 distribution at a certain significance level, the feature selection is stopped.

In this section, we start with a brief introduction to the recently proposed matrix-based Rényi’s α-entropy functional [18] and its multivariate extension [10]. Benefited from the novel definition, two simple stopping criteria are presented.

In information theory, a natural extension of the well-known Shannon’s entropy is Rényi’s α-order entropy [19]

. For a random variable

Based on this entropy definition, Rényi then proposed a divergence measure (α-relative entropy) between random variables with PDFs f and g:

Rényi’s entropy and divergence evidence a long track record of usefulness in information theory and its applications [20]. Unfortunately, the accurate PDF estimation impedes its more widespread adoption in data driven science. To solve this problem, [18, 10] suggest similar quantities that resembles quantum Rényi’s entropy [21] in terms of the normalized eigenspectrum of the Hermitian matrix of the projected data in RKHS, thus estimating the entropy, joint entropy among two or multiple variables directly from data without PDF estimation. For brevity, we directly give the definition.

Given a collection of n samples {si=(xi1,xi2,⋯,xik)}ni=1, where the superscript i denotes the sample index, each sample contains k (k≥2) measurements x1∈X1, x2∈X2, ⋯, xk∈Xk obtained from the same realization, and the positive definite kernels κ1:X1×X1↦R, κ2:X2×X2↦R, ⋯, κk:Xk×Xk↦R, a matrix-based analogue to Rényi’s α-order joint-entropy among k variables can be defined as:

As can be seen, the multivariate matrix-based Rényi’s α-entropy functional enables simple estimation of both MI and CMI in high-dimensional space, no matter the data characteristics (e.g., continuous or discrete) in each dimension. Benefited from these elegant expressions, suppose the new feature selected in the current iteration is xcand, we present two simple criteria to guide the early stopping of the greedy search. Specifically, we aim to test the “goodness-of-fit” of the MB condition, i.e., S−S′ is the MB of y given S′. Intuitively, if I({S−S′−xcand};y|{S′,xcand}) approaches zero, the MB condition is approximately satisfied.

refers to a tiny threshold, then we should stop the selection. We term this criterion CMI-heuristic, since

ε is a heuristic value.

Criterion II. Motivated by [11], in order to quantify how xcand affects the MB condition, we create a random permutation of xcand (without permuting the corresponding y), denoted ˜xcand. If I({S−S′−xcand};y|{S′,xcand}) is not significantly smaller than I({S−S′−˜xcand};y|{S′,˜xcand}), xcand can be discarded and the feature selection is stopped. We term this criterion CMI-permutation (see Algorithm 1 for more details, in which 1 denotes the indicator function).

We compare our two criteria with existing ones [14, 11] on 10 well-known public datasets used in previous feature selection research [5, 14], covering a wide variety of sample-feature ratios and a range of multi-class problems. The detailed properties of these datasets, including the number of features (F), the number of examples (N) and the number of classes (C), are available in [5]. We refer the criterion in [14] ΔMI-χ2, since it monitors the increment of MI I(S′;y) (i.e., I(xcand;y|S′)) with χ2 distribution. We refer the criterion in [11] MI-permutation, since it uses the permutation test to quantify the impact of xcand on I(S′;y). Throughout this letter, we select ε=10−4 in CMI-heuristic and a significance level of α=0.05 in permutation test. To provide a fair comparison, instead of using the k

[23] which may result in negative CMI quantities (see results in [11]), we use the multivariate matrix-based Rényi’s α-entropy functional to estimate all MI quantities in MI-permutation. The baseline information feature selection method used in this letter is from [10], which directly optimizes I(S′;y) in a greedy manner without any decomposition or approximation. An example for different stopping criteria on the dataset waveform is shown in Fig. 1.

The quantitative results are summarized in Table I. For each criterion, we report the number of selected features and the average classification accuracy across 100 bootstrap runs. In each run, N bootstrap samples are drawn for the training set, while the unselected samples serve as the test set. Same to [5]

, we use the linear support vector machine (SVM) as the baseline classifier. To give a reference, we define the “optimal” number of features (an unknown parameter) as the one that yields the maximum bootstrap accuracy or first achieves a bootstrap accuracy with no statistical difference to the maximum value (evaluated by paired t-test with significance level

0.05), and rank all the criteria based on the difference between their estimated number of features and the optimal one.

As can be seen, ΔMI-χ2 is likely to severely underestimate the number of features, accompanied by the lowest bootstrap accuracy. One possible reason is that I(xcand;y|S′) does not precisely fit a χ2 distribution if the MB condition is not satisfied. CMI-permutation and MI-permutation always have the same ranks. This is because I(S′;y)+I({S−S′};y|S′)=I(S;y), a fixed value. Thus, it is equivalent to monitor the increment of I(S′;y) or the decrement of I({S−S′};y|S′). On the other hand, it is surprising to find that CMI-heuristic performs the best in most datasets. This indicates that although permutation test is effective to test the MB condition, ε=10−4 is a reliable threshold to speed up this test, as the permutation test is always time-consuming. Finally, the Wilcoxon rank-sum test at 0.1 significance level, shown in Table II, corroborates our analysis that our criteria perform equally to MI-permutation, but significantly better than ΔMI-χ2.