We present rotating periodic boundary conditions (PBCs) for the simulation of nonequilibrium molecular dynamics (NEMD) under uniaxial stretching flow (USF) or biaxial stretching flow (BSF). Such nonequilibrium flows need specialized PBCs since the simulation box deforms with the background flow. The technique builds on previous models using one or lattice remappings, and is simpler than the PBCs developed for the general three dimensional flow. For general three dimensional flows, Dobson <cit.> and Hunt <cit.> proposed schemes which are not time-periodic since they use more than one automorphism remapping. This paper presents a single automorphism remapping PBCs for USF and BSF which is time periodic up to a rotation matrix and has a better minimum lattice spacing properties. 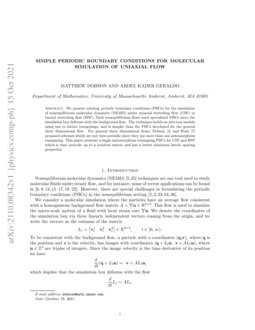 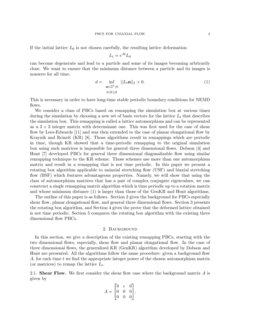 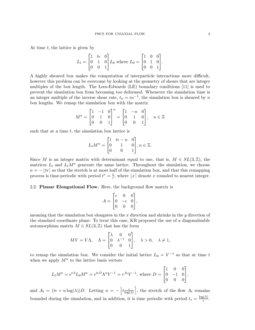 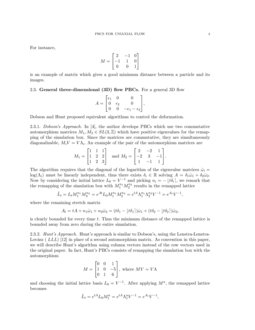 Periortree: An Extention of R-Tree for Periodic Boundary Conditions

An Expedient Approach to FDTD-based Modeling of Finite Periodic Structures

Clipping over dissipation in turbulence models

We consider a molecular simulation where the particles have an average flow consistent with a homogeneous background flow matrix A=∇u∈R3×3. This flow is used to simulate the micro-scale motion of a fluid with local strain rate ∇u.

We denote the coordinates of the simulation box via three linearly independent vectors coming from the origin, and we write the vectors as the columns of the matrix

To be consistent with the background flow, a particle with a coordinates (q,v), where q is the position and v is the velocity, has images with coordinates (q+Ltn, v+ALtn), where n∈Z3 are triples of integers. Since the image velocity is the time derivative of its position we have

which implies that the simulation box deforms with the flow

If the initial lattice L0 is not chosen carefully, the resulting lattice deformation

This is necessary in order to have long-time stable periodic boundary conditions for NEMD flows.

We consider a class of PBCs based on remapping the simulation box at various times during the simulation by choosing a new set of basis vectors for the lattice Lt that describes the simulation box. This remapping is called a lattice automorphism and can be represented as a 3×3 integer matrix with determinant one. This was first used for the case of shear flow by Lees-Edwards [11] and was then extended to the case of planar elongational flow by Kraynik and Reinelt (KR) [8]. Those algorithms result in remappings which are periodic in time, though KR showed that a time-periodic remapping to the original simulation box using such matrices is impossible for general three dimensional flows. Dobson [4] and Hunt [7]

developed PBCs for general three dimensional diagonalizable flow using similar remapping technique to the KR scheme. Those schemes use more than one automorphism matrix and result in a remapping that is not time periodic. In this paper we present a rotating box algorithm applicable to uniaxial stretching flow (USF) and biaxial stretching flow (BSF) which features advantageous properties. Namely, we will show that using the class of automorphism matrices that has a pair of complex conjugate eigenvalues, we can construct a single remapping matrix algorithm which is time periodic up to a rotation matrix and whose minimum distance (

1) is larger than those of the GenKR and Hunt algorithms.

The outline of this paper is as follows. Section 2 gives the background for PBCs especially shear flow, planar elongational flow, and general three dimensional flows. Section 3 presents the rotating box algorithm, and Section 4 gives the prove that the deformed lattice obtained is not time periodic. Section 5 compares the rotating box algorithm with the existing three dimensional flow PBCs.

In this section, we give a description of the existing remapping PBCs, starting with the two dimensional flows, especially, shear flow and planar elongational flow. In the case of three dimensional flows, the generalized KR (GenKR) algorithm developed by Dobson and Hunt are presented. All the algorithms follow the same procedure: given a background flow A, for each time t we find the appropriate integer power of the chosen automorphism matrix (or matrices) to remap the lattice Lt.

At time t, the lattice is given by

such that at a time t, the simulation box lattice is

Since M is an integer matrix with determinant equal to one, that is, M∈SL(3,Z), the matrices Lt and LtMn generate the same lattice. Throughout the simulation, we choose n=−⌊tϵ⌉ so that the stretch is at most half of the simulation box, and that this remapping process is time-periodic with period t∗=1ϵ, where ⌊x⌉ denote x rounded to nearest integer.

Here, the background flow matrix is

meaning that the simulation box elongates in the x direction and shrinks in the y direction of the standard coordinate plane. To treat this case, KR proposed the use of a diagonalizable automorphism matrix M∈SL(3,Z) that has the form

to remap the simulation box. We consider the initial lattice L0=V−1 so that at time t when we apply Mn to the lattice basis vectors

and At=(tϵ+nlog(λ))D. Letting n=−⌊tϵlog(λ)⌉, the stretch of the flow At remains bounded during the simulation, and in addition, it is time periodic with period t∗=log(λ)ϵ. For instance,

is an example of matrix which gives a good minimum distance between a particle and its images.

For a general 3D flow

Dobson and Hunt proposed equivalent algorithms to control the deformation.

The algorithm requires that the diagonal of the logarithm of the eigenvalue matrices ^ωi=log(Λi) must be linearly independent, thus there exists δi∈R solving A=δ1^ω1+δ2^ω2. Now by considering the initial lattice L0=V−1 and picking ni=−⌊tδi⌉, we remark that the remapping of the simulation box with Mn11Mn22 results in the remapped lattice

where the remaining stretch matrix

is clearly bounded for every time t. Thus the minimum distance of the remapped lattice is bounded away from zero during the entire simulation.

Hunt’s approach is similar to Dobson’s, using the Lenstra-Lenstra-Lovász ( LLL) [12] in place of a second automorphism matrix. As convention in this paper, we will describe Hunt’s algorithm using column vectors instead of the row vectors used in the original paper. In fact, Hunt’s PBCs consists of remapping the simulation box with the automorphism

where At=tA+nlog(Λ1). This singe matrix is not enough to control the deformation. The LLL reduction algorithm [12] is used to reduce the remapped lattice ~Lt by finding a matrix M2∈SL(3,Z) using a high precision reduction,

In comparison to the GenKR’s approach, such M2 is automatically found on the earlier stage of the method while considering the communicative matrices. On this point, we can improve the Hunt PBCs by finding the commutative matrix M2 manually and apply the GenKR to produce remapped lattice which minimum distance is bounded before the reduction step. The combination of this algorithm is presented in Algorithms 2 will be presented later in the paper.

In this section, we will develop PBCs for USF and BSF that are time periodic up to a rotation. We write the background flow as

Here, rather than choosing a pair of matrices Mi∈SL(3,Z) with real spectrum, we will use a single matrix M∈SL(3,Z) which has a pair of complex conjugate eigenvalues and use it to remap the simulation box.

Let us consider M∈SL(3,Z), a matrix that has a pair of complex conjugate eigenvalues and write its real Jordan form

which can be decomposed as:

For all time t, by choosing the initial lattice L0=V−1, we can keep the lattice Lt=eAtL0 bounded by remapping the simulation box with Mn

4. Non time periodicity of the lattice in the rotating box algorithm

As mentioned above, for the class of automorphism matrices with real eigenvalues, it has been shown in [8] that it is impossible to construct KR PBCs with a time periodic lattice for USF or BSF. In this section, we will extend this demonstration to the class of automorphism matrices which have complex conjugate eigenvalues. Namely, we show in the following corollary that although the rotation algorithm applied to USF or BSF is time-periodic up to a rotation matrix, there is no choice of M∈SL(3,Z) where the period of the remapping aligns with that of the rotation. In other word, we show that rotation matrix enβB is not equal to the identity matrix for n≠0, or β is not a equal of π times a rational number

for any M consider in Section 3, i.e with complex eigenvalues one of the eigenvalue of M is not equal to 1.

A matrix M∈SL(3,Z) with complex eigenvalues as define above has β=2πmn if it has at least an eigenvalue equal to 1.

The proof of Lemma 1 requires the use of the following results. Let us consider φ, the Euler totient function where φ(n) is the number of positive integers that are relatively prime to n. A scalar α is said to be algebraic over a field K if there exists elements a0,…,ai,(i≥1) of K, not equal to zero, such that

and deg{α} is the degree of the irreducible characteristic polynomial. We refer the reader to [10, Chapter 4] or any introduction to Algebra book for the background about the definitions used in this section. Then we have:

[1, Theorem 16.8.5] For K the splitting field of an irreducible cubic polynomial P over a field Q and DP the discriminant of P,

We determine the degree of the algebraic integer tanβ in the following lemma:

tanβ=~β~η is an algebraic integer of degree at most six.

Since ~η and ~β are elements of the splitting field K=Q(r,eβ) of the irreducible polynomial P, we have that ~β~η is also an element of K. By Theorem 2, K has a degree as most six in Q and so does ~β~η. ∎

Let us prove Lemma 1 by finding all coefficients k,h∈Z+ of the characteristic polynomial of M for which β=2mπn,m,n∈Z.

Let us assume that β=2mπn,m,n∈Z, and find the possible n,m by using Theorem 1 and the Theorem 2 which guarantee that tan2mπn is an algebraic integer of degree at most six. Thus using [14], we find all n that satisfy the following

Then after few computing we find that

In sum, we derive the main corollary of this section:

The rotating box algorithm cannot give a time-periodic simulation box for any choice of integer commutative complex conjugate matrix.

Using Lemma 1, we know that only matrices with an eigenvalue equal to one 1 have a rotational part that is a root of unity. However, those matrices are themselves pure rotations and have no use for the PBCs since they cannot control the stretching caused by the underlying background flow. ∎

5. Comparison of the three dimensional algorithms

In this section, we compute the minimum distance of the particle images for our algorithm and compare it with the GenKR using, Hunt’s and Dobson’s automorphism matrices.

To compute the minimum distance between a particle and its images when the rotating box PBCs is applied, we propose the matrix

which has a pair of complex conjugate eigenvalues with positive real part. Then, the initial lattice is given by

which implies that, given the standard lattice with the coordinate (x,y,z), the xy plane is rotated counterclockwise by approximately 113 degrees, and xz by 111 degrees.

Moreover for the GenKR algorithm, we keep the automorphism matrices and the initial lattice given in the original paper. The commutative matrices Mi∈SL(3,Z) and associated with the initial orthonormal lattice basis L0 which determinant is equal to one, are given by

For Hunt’s formulation, we find a second automorphism matrix which has positive eigenvalues and is commutative with the matrix given in the original paper. The commutative matrices M1,M2 and the normalized initial lattice L0 respectively read

Kraynik-Reinelt proved that it is impossible to find time periodic PBCs for general three dimensional flow, using SL(3,Z) matrices with real eigenvalues. In this paper, we show that by using an SL(3,Z) matrix with complex eigenvalues, we can create an algorithm that is time-periodic up to a rotation matrix for USF and BSF. Although we show that the rotations never align, the regularity of the remapping make this algorithm more straightforward than the existing ones. These PBCs also offer a better minimum distance between a particle and its images.