We consider the multilinear polytope which arises naturally in binary polynomial optimization. Del Pia and Di Gregorio introduced the class of odd β-cycle inequalities valid for this polytope, showed that these generally have Chvátal rank 2 with respect to the standard relaxation and that, together with flower inequalities, they yield a perfect formulation for cycle hypergraph instances. Moreover, they describe a separation algorithm in case the instance is a cycle hypergraph. We introduce a weaker version, called simple odd β-cycle inequalities, for which we establish a strongly polynomial-time separation algorithm for arbitrary instances. These inequalities still have Chvátal rank 2 in general and still suffice to describe the multilinear polytope for cycle hypergraphs. 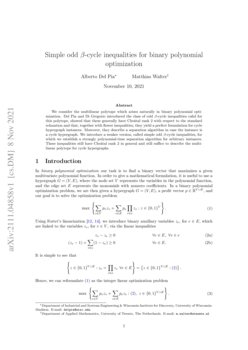 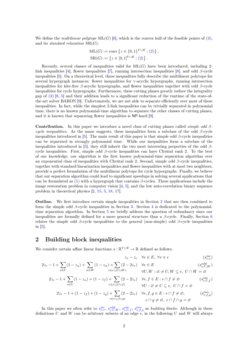 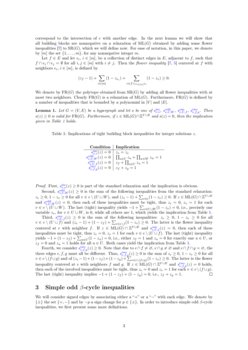 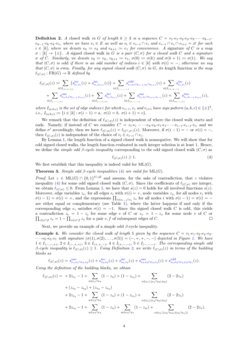 On bounded pitch inequalities for the min-knapsack polytope

In the min-knapsack problem one aims at choosing a set of objects with m...
Yuri Faenza, et al. ∙

Supermodularity and valid inequalities for quadratic optimization with indicators

We study the minimization of a rank-one quadratic with indicators and sh...
Alper Atamturk, et al. ∙

On the Shortest Separating Cycle

A Note on Directed Treewidth

We characterise digraphs of directed treewidth one in terms of forbidden...
Sebastian Wiederrecht, et al. ∙

We propose a new test for inequalities that is simple and uniformly vali...
Gregory Cox, et al. ∙

The aim of this paper is to present a new algorithm for proving mixed tr...
Tatjana Lutovac, et al. ∙

our task is to find a binary vector that maximizes a given multivariate polynomial function. In order to give a mathematical formulation, it is useful to use a hypergraph

Using Fortet’s linearization [12, 14], we introduce binary auxiliary variables ze, for e∈E, which are linked to the variables zv, for v∈V, via the linear inequalities equationparentequation

It is simple to see that

Hence, we can reformulate (1) as the integer linear optimization problem

We define the multilinear polytope \Pml(G) [6], which is the convex hull of the feasible points of (3), and its standard relaxation \Psr(G):

-cycles. These applications include the image restoration problem in computer vision

mm mmm mmm mmm In this paper we often refer to since,v, sodde,U,W, sonee,U,f, stwoe,f,g as building blocks. Although in these definitions U and W can be arbitrary subsets of an edge e, in the following U and W will always correspond to the intersection of e with another edge. In the next lemma we will show that all building blocks are nonnegative on a relaxation of \Pml(G) obtained by adding some flower inequalities [7] to \Psr(G), which we will define now. For ease of notation, in this paper, we denote by [m] the set {1,…,m}, for any nonnegative integer m.

Let f∈E and let ei, i∈[m], be a collection of distinct edges in E, adjacent to f, such that f∩ei∩ej=∅ for all i,j∈[m] with i≠j. Then the flower inequality [7, 5] centered at f with neighbors ei, i∈[m], is defined by

We denote by \Pfr(G) the polytope obtained from \Psr(G) by adding all flower inequalities with at most two neighbors. Clearly \Pfr(G) is a relaxation of \Pml(G). Furthermore, \Pfr(G) is defined by a number of inequalities that is bounded by a polynomial in |V| and |E|.

First, ???(z)≥0 is part of the standard relaxation and the implication is obvious.

We will consider signed edges by associating either a “+” or a “−” with each edge. We denote by {±} the set {+,−} and by −p a sign change for p∈{±}. In order to introduce simple odd β-cycle inequalities, we first present some more definitions.

We first establish that this inequality is indeed valid for \Pml(G).

Let z∈\Pml(G)∩{0,1}V∪E and assume, for the sake of contradiction, that z violates inequality (4) for some odd signed closed walk (C,σ). Since the coefficients of ℓ(C,σ) are integer, we obtain ℓ(C,σ)≤0. From Lemma 1, we have that s(z)=0 holds for all involved functions s(z). Moreover, edge variables zei for all edges ei with σ(i)=+, node variables zvi for all nodes vi with σ(i−1)=σ(i)=+, and the expressions ∏v∈ei−1∩eizv for all nodes i with σ(i−1)=σ(i)=− are either equal or complementary (see Table 1), where the latter happens if and only if the corresponding edge ei satisfies σ(i)=−1. Since the signed closed walk C is odd, this yields a contradiction ze=1−ze for some edge e of C or zv=1−zv for some node v of C or ∏v∈e∩fzv=1−∏v∈e∩fzv for a pair e,f of subsequent edges of C. ∎

Next, we provide an example of a simple odd β-cycle inequality.

Using the definition of the building blocks, we obtain

We write the sums explicitly and obtain

Example 4 suggests that, when the function is written explicitly, the coefficients in the function ℓ(C,σ)(z) exhibit a certain pattern. This different expression of ℓ(C,σ)(z) is formalized in the next lemma. The proof of the lemma can be obtained directly from the definition of ℓ(C,σ)(z) by summing up each variable that appears in more than one building block.

Let (C,σ) be an odd signed closed walk in a hypergraph G. From Lemma 1 we obtain that ℓ(C,σ)(z)≥0 holds for each z∈\Pfr(G). Lemma 5 reveals that in the inequality ℓ(C,σ)(z)≥0, all variables’ coefficients are even integers, while the constant term is an odd integer. Hence, the inequality divided by 2 has integral variable coefficients, and we can obtain the corresponding Chvátal-Gomory inequality by rounding the constant term up. The resulting inequality is the simple odd β-cycle inequality (4) scaled by 1/2 and has the form (6). This shows that simple odd β-cycle inequalities are Chvátal-Gomory inequalities for \Pfr(G). ∎

The main goal of this section is to show that the separation problem over simple odd β-cycle inequalities can be solved in strongly polynomial time (Theorem 10). This will be achieved by means of an auxiliary undirected graph in which several shortest-path computations must be carried out. The auxiliary graph is inspired by the one for the separation problem of odd-cycle inequalities for the maximum cut problem [1]. However, to deal with our different problem and the more general hypergraphs we will extend it significantly.

Let G=(V,E) be a hypergraph and let ^z∈\Pfr(G). Define \triples\coloneqq{(e,f,g)∈E:e∩f≠∅, f∩g≠∅, e∩f∩g=∅} to be the set of potential subsequent edge triples. We define the auxiliary graph

and length function ¯ℓ:¯E→\R as follows.

We point out that the graph ¯G can have parallel edges, possibly with different lengths. We immediately obtain the following corollary from Lemma 1.

The edge lengths ¯ℓ:¯E→\R are nonnegative.

We say that two nodes ¯u,¯v∈¯V are twins if they only differ in the second component, i.e., the sign. We call a walk ¯W in the graph ¯G a twin walk if its end nodes are twin nodes. For a walk ¯W in ¯G, we denote by ¯ℓ(¯W) the total length, i.e., the sum of the edge lengths ¯ℓe along the edges e in ¯W. In the next two lemmas we study the relationship between odd signed closed walks in G and twin walks in ¯G.

For each twin walk ¯W in ¯G there exists an odd signed closed walk (C,σ) in G whose induced simple odd β-cycle inequality (4) has slack ¯ℓ(¯W)−1 with respect to ^z. In particular, if ¯ℓ(¯W)<1 holds, then the inequality is violated by ^z.

Let ¯W be a twin walk in ¯G. We first construct the signed closed walk (C,σ) by processing the edges of ¯W in their order. Throughout the construction we maintain the index i of the next edge to be constructed, which initially is i\coloneqq1. Since the construction depends on the type of the current edge ¯e={¯u,¯v}∈¯W (where ¯W visits ¯u first), we distinguish the relevant cases: