A simple game (N,v) is given by a set N of n players and a partition of 2^N into a set L of losing coalitions L with value v(L)=0 that is closed under taking subsets and a set W of winning coalitions W with v(W)=1. Simple games with α= _p≥ 0_W∈ W, L∈ Lp(L)/p(W)<1 are exactly the weighted voting games. We show that α≤1/4n for every simple game (N,v), confirming the conjecture of Freixas and Kurz (IJGT, 2014). For complete simple games, Freixas and Kurz conjectured that α=O(√(n)). We prove this conjecture up to a n factor. We also prove that for graphic simple games, that is, simple games in which every minimal winning coalition has size 2, computing α is -hard, but polynomial-time solvable if the underlying graph is bipartite. Moreover, we show that for every graphic simple game, deciding if α<a is polynomial-time solvable for every fixed a>0. 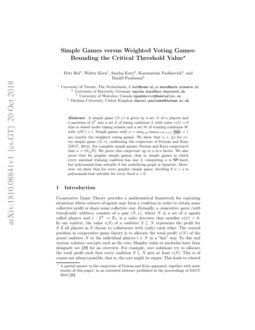 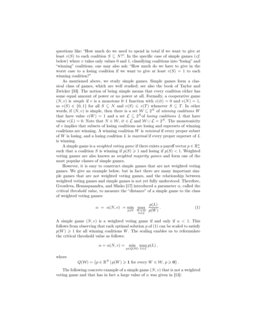 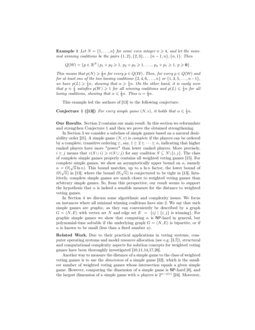 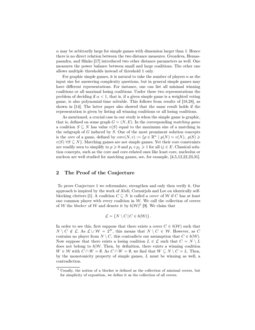 In this note, we show that for every simple game with n players the crit...
Kanstantsin Pashkovich, et al. ∙

Winning the War by (Strategically) Losing Battles: Settling the Complexity of Grundy-Values in Undirected Geography

A note on simple games with two equivalence classes of players

This paper identifies a manifold in the space of bimatrix games which co...
Joseph L. Heyman, et al. ∙

Cooperative Game Theory provides a mathematical framework for capturing situations where subsets of agents may form a coalition in order to obtain some collective profit or share some collective cost. Formally, a

cooperative game (with transferable utilities) consists of a pair (N,v), where N is a set of n agents called players and v:2N→R+ is a value function that satisfies v(∅)=0. In our context, the value v(S) of a coalition S⊆N represents the profit for S if all players in S choose to collaborate with (only) each other. The central problem in cooperative game theory is to allocate the total profit v(N) of the grand coalition N to the individual players i∈N in a “fair” way. To this end various solution concepts such as the core, Shapley value or nucleolus have been designed; see [29] for an overview. For example, core solutions try to allocate the total profit such that every coalition S⊆N gets at least v(S). This is of course not always possible, that is, the core might be empty. This leads to related questions like: “How much do we need to spend in total if we want to give at least v(S) to each coalition S⊆N?”. In the specific case of simple games (cf. below) where v takes only values 0 and 1

, classifying coalitions into “losing” and “winning” coalitions, one may also ask: “How much do we have to give in the worst case to a losing coalition if we want to give at least

v(S)=1 to each winning coalition?”

As mentioned above, we study simple games. Simple games form a classical class of games, which are well studied; see also the book of Taylor and Zwicker [33]. The notion of being simple means that every coalition either has some equal amount of power or no power at all. Formally, a cooperative game (N,v) is simple if v is a monotone 0–1 function with v(∅)=0 and v(N)=1, so v(S)∈{0,1} for all S⊆N and v(S)⩽v(T) whenever S⊆T. In other words, if (N,v) is simple, then there is a set W⊆2N of winning coalitions W that have value v(W)=1 and a set L⊆2Nof losing coalitions L that have value v(L)=0. Note that N∈W, ∅∈L and W∪L=2N. The monotonicity of v implies that subsets of losing coalitions are losing and supersets of winning coalitions are winning. A winning coalition W is minimal if every proper subset of W is losing, and a losing coalition L is maximal if every proper superset of L is winning.

A simple game is a weighted voting game

if there exists a payoff vector

p∈Rn+ such that a coalition S is winning if p(S)⩾1 and losing if p(S)<1. Weighted voting games are also known as weighted majority games and form one of the most popular classes of simple games.

A simple game (N,v) is a weighted voting game if and only if α<1. This follows from observing that each optimal solution p of (1) can be scaled to satisfy p(W)⩾1 for all winning coalitions W. The scaling enables us to reformulate the critical threshold value as follows:

The following concrete example of a simple game (N,v) that is not a weighted voting game and that has in fact a large value of α was given in [13]:

This example led the authors of [13] to the following conjecture:

Section 2 contains our main result. In this section we reformulate and strengthen Conjecture 1 and then we prove the obtained strengthening.

In Section 4 we discuss some algorithmic and complexity issues. We focus on instances where all minimal winning coalitions have size 2. We say that such simple games are graphic, as they can conveniently be described by a graph G=(N,E) with vertex set N and edge set E = {ij | {i,j} is winning}. For graphic simple games we show that computing α is NP-hard in general, but polynomial-time solvable if the underlying graph G=(N,E) is bipartite, or if α is known to be small (less than a fixed number a).

As mentioned, a crucial case in our study is when the simple game is graphic, that is, defined on some graph G=(N,E). In the corresponding matching game a coalition S⊆N has value v(S) equal to the maximum size of a matching in the subgraph of G induced by S. One of the most prominent solution concepts is the core of a game, defined by core(N,v):={p∈Rn | p(N)=v(N), p(S)⩾v(S) ∀S⊆N}. Matching games are not simple games. Yet their core constraints are readily seen to simplify to p⩾0 and pi+pj⩾1 for all ij∈E. Classical solution concepts, such as the core and core-related ones like least core, nucleolus or nucleon are well studied for matching games, see, for example, [4, 5, 12, 22, 23, 31].

2 The Proof of the Conjecture

To prove Conjecture 1 we reformulate, strengthen and only then verify it. Our approach is inspired by the work of Abdi, Cornuéjols and Lee on identically self-blocking clutters [1]. A coalition C⊆N is called a cover of W if C has at least one common player with every coalition in W. We call the collection of covers of W the blocker of W and denote it by b(W)111Usually, the notion of a blocker is defined as the collection of minimal covers, but for simplicity of exposition, we define it as the collection of all covers. [9]. We claim that

As L={N∖C|C∈b(W)}, the critical threshold value can be reformulated as follows

Here, ⟨p,q⟩ stands for the scalar product of two vectors p and q. To see the last equality, for a cover C we can define a corresponding vector q∈{0,1}N∩Q(W) by setting qi=1 if i∈C and qi=0 otherwise.

Conjecture 1 (reformulated) For a simple game with n players and the collection of winning coalitions W, we have

Next, we prove Theorem 3, which is a strengthening of Conjecture 1. For the proof we need the following straightforward remark, which we leave as an exercise. Here, we write ∥p∥2=√p21+…+p2n for a vector p∈Rn.

Let P be a polyhedron and let p⋆ be the optimal solution of the program min{∥p∥2|p∈P}. Then p⋆

is an optimal solution of the linear program

For a simple game with n players and the collection of winning coalitions W, we have

In particular, if p⋆ is the optimal solution for the program

Let us discuss when Conjecture 1 provides a tight upper bound for the critical threshold value. The next theorem shows that if the upper bound in Conjecture 1 is tight, then this fact can be certified in the same way as in Example 1.

On the other hand, from the proof of Theorem 3 we know that if α=n/4 then p⋆=121 is an optimal solution for min{⟨p⋆,q⟩|q∈Q(W)} with value n/4. Let us show that 2n1 lies in the convex hull of the characteristic vectors of winning coalitions. To do that consider an optimal dual solution y⋆ for the program min{⟨p⋆,q⟩|q∈Q(W)}. Using complementary slackness it is straightforward to show that 4ny⋆ provides coefficients of a convex combination of characteristic vectors of winning coalitions, where the convex combination equals 2n1.

In the same way as the proof of Theorem 3, we could show that

where q⋆ is the optimal solution for the program

Intuitively, the class of complete simple games is “closer” to weighted voting games than general simple games. The next result quantifies this expectation.

For a complete simple game (N,v), it holds that α⩽√nlnn.

A fundamental question concerns the complexity of our original problem (1), i.e., the complexity of computing the critical threshold value of a simple game. For general simple games this depends on how the game in question is given, and we refer to Section 1 for a discussion. Here we concentrate on the “graphic” case.

Computing αG for bipartite graphs G can be done in polynomial time.

Let P⊆Rn be the set of feasible payoffs (satisfying p⩾0 and pi+pj⩾1 for ij∈E). For α∈R, let Pα:={p∈P | p(L)⩽α~{}for all independent ~{}% L⊆N}. Thus αG=min{α | Pα≠∅}. The separation problem for Pα (for any given α) is efficiently solvable. Given p∈Rn, we can check feasibility and whether max{p(L) | L⊆N~{}independent}⩽α by solving a corresponding maximum weight independent set problem in the bipartite graph G. Thus we can, for any given α∈R, apply the ellipsoid method to either compute some p∈Pα or conclude that Pα=∅. Binary search then exhibits the minimum value for which Pα is non-empty; binary search works indeed in polynomial time as the optimal α has size polynomially bounded in n, which follows from observing that

can be computed by solving a linear system of n constraints defining an optimal basic solution of the above linear program. ∎

The proof of Proposition 1 also applies to other classes of graphs, such as claw-free graphs (see [6]) in which finding a weighted maximum independent set is polynomial-time solvable. In general, the problem is NP-hard.

First note that the independent sets in G∗ are exactly the sets L∗⊆N∗ that arise from an independent set L⊆N in G by splitting L into two complementary sets L1 and L2 and defining L∗:=L′1∪L′′2. Hence, p≡12 on N∗ yields maxp(L∗)=k/2 where the maximum is taken over all independent sets L∗⊆N∗ in G∗. This shows that αG∗⩽k/2.

Conversely, let p∗ be any feasible payoff in G∗, that is, p∗⩾0 and p∗i+p∗j⩾1 for all ij∈E∗. Let L⊆N be a maximum independent set of size k in G and construct L∗ by including for each i∈L either i′ or i′′ in L∗, whichever has p-value at least 12. Then, by construction, L∗ is an independent set in G∗ with p∗(L∗)⩾k/2, showing that αG∗⩾k/2. ∎

Summarizing, for graphic simple games, computing αG is as least as hard as computing the size of a maximum independent in G. For our last result we assume that a is a fixed integer, that is, a is not part of the input.

For every fixed a>0, it is possible to decide if αG⩽a in polynomial time for an arbitrary graph G=(N,E).