The iterative random subdivision of rectangles is used as a generation model of networks in physics, computer science, and urban planning. However, these researches were independent. We consider some relations in them, and derive fundamental properties for the average lifetime depending on birth-time and the balanced distribution of rectangle faces. 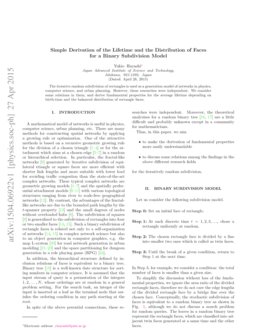 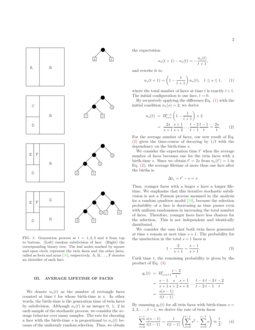 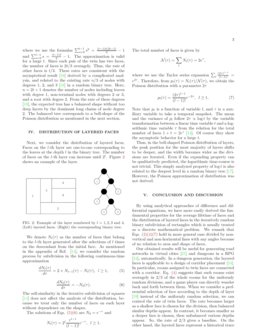 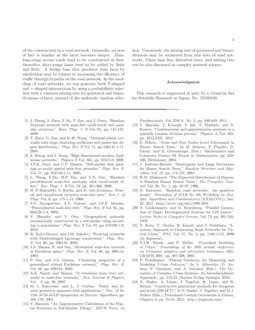 A mathematical model of networks is useful in physics, computer science, urban planning, etc. There are many methods for constructing spatial networks by applying a growing rule or optimization. One of the attractive methods is based on a recursive geometric growing rule for the division of a chosen triangle Zhang08 ; Zhou05 ; Zhang06 ; Doye05 or for the attachment which aims at a chosen edge Wang06 ; Rozenfeld06 ; Dorogovtsev02 in a random or hierarchical selection. In particular, the fractal-like networks Hayashi10 generated by iterative subdivision of equilateral triangle or square faces are more efficient with shorter link lengths and more suitable with lower load for avoiding traffic congestion than the state-of-the-art complex networks. These typical complex networks are geometric growing models Zhang08 ; Wang06 ; Rozenfeld06 ; Dorogovtsev02 ; Zhou05 ; Zhang06 ; Doye05 and the spatially preferential attachment models Brunet02 ; Manna02 ; Manna03 with various topological structures ranging from river to scale-free geographical networks Nandi07 . By contrast, the advantages of the fractal-like networks are due to the bounded path lengths by the t-spanner property Karavelas01 and the small degrees of nodes without overloaded hubs Hayashi10 . The subdivision of squares Hayashi10 is generalized to the subdivision of rectangles into four or two smaller faces Hayashi11 ; Hayashi13 . Such a binary subdivision of rectangle faces is related not only to a self-organization of networks Hayashi11 ; Hayashi13 in complex network science but also to an object generation in computer graphics, e.g. the map L-system Lindenmayer79 for road network generation in urban modeling Kato00 ; Parish01 ; Frankhauser10 and the space partitioning for dungeon generation in a role playing game (RPG) Shaker15 .

In addition, the hierarchical structure defined by inclusion relations of faces is equivalent to a binary tree. Binary tree Mahmoud86 is a well-known date structure for sorting numbers in computer science. It is assumed that the input stream of query is a permutation of the integers 1,2,…,N, whose orderings are at random in a general problem setting. For the search task, an integer of the input is inserted at a leaf as the terminal node that satisfies the ordering condition in any path starting at the root.

In spite of the above potential connections, these researches were independent. Moreover, the theoretical analysises for a random binary tree Hattab01 ; Fekete04

are a little difficult and probably unknown except in a community for mathematicians.

Thus, in this paper, we aim

for the iteratively random subdivision.

Set an initial face of rectangle.

At each discrete time t=1,2,3,…, chose a rectangle uniformly at random.

The chosen rectangle face is divided by a line into smaller two ones which is called as twin faces.

Until the break of a given condition, return to Step 1 at the next time.

In Step 3, for example, we consider a condition: the total number of faces is smaller than a given size.

, although we do not discuss a search problem for random queries. The leaves in a random binary tree represent the rectangle faces, which are classified into adjacent twin faces generated at a same time and the other faces.

We denote ns(t) as the number of rectangle faces counted at time t for whose birth-time is s. In other words, the birth-time is the generation time of twin faces by subdivision. Although ns(t) is an integer 0,1,2 in each sample of the stochastic process, we consider the average behavior over many samples. The rate for choosing a face with the birth-time s is proportional to ns(t) because of the uniformly random selection. Thus, we obtain the expectation

and rewrite it to

where the total number of faces at time t is exactly t+1. The initial configuration is one face, t=0.

By recursively applying the difference Eq. (1) with the initial condition ns(s)=2, we derive

For the average number of faces, our new result of Eq. (2) gives the time-course of decaying by 1/t with the dependency on the birth-time s.

We consider the expectation time t′ when the average number of faces becomes one for the twin faces with a birth-time s. Since we obtain t′=2s from ns(t′)=1 in Eq. (2), the average lifetime of more than one face after the births is

Thus, younger faces with a larger s have a longer lifetime. We emphasize that this iterative stochastic subdivision is not a Poisson process assumed in the analysis for a random quadtree model Eisenstat11 , because the selection probability of a face is decreasing as time passes even with uniform randomness in increasing the total number of faces. Therefore, younger faces have less chances for the selection. This is not independent and identically distributed.

We consider the case that both twin faces generated at time s remain at next time s+1. The probability for the unselection in the total s+1 faces is

Until time t, the remaining probability is given by the product of Eq. (3)

By summing qs(t) for all twin faces with birth-times s=2,3,…,t−1, we derive the rate of twin faces

where we use the formulas ∑t−1s=2s2=(t−1)t(2t−1)6−1 and ∑t−1s=2s=(t−1)t2−1. The approximation is valid for a large t. Since each pair of the twin has two faces, the number of faces is 2t/3 averagely. Thus, the rate of other faces is t/3. These rates are consistent with the asymptotical result Fekete04 derived by a complicated analysis, and related to the existing rate n/3 of nodes with degrees 1, 2, and 3 Mahmoud86 in a random binary tree. Here, n=2t+1 denotes the number of nodes including leaves with degree 1, non-terminal nodes with degrees 2 or 3, and a root with degree 2. From the rate of these degrees Mahmoud86 , the expected tree has a balanced shape without too deep layers by the dominant long chains of node degree 2

. The balanced tree corresponds to a bell-shape of the Poisson distribution as mentioned in the next section.

We denote Nl(τ) as the number of faces that belong to the l-th layer generated after the selections of l times on the descendant from the initial face. As mentioned in the appendix of Ref. Hayashi11 , we consider the random process by subdivision in the following continuous-time approximation

The self-similarity in the iterative subdivision of squares Hayashi11 does not affect the analysis of the distribution, because we treat only the number of faces on each layer without dependence on the shapes.

The total number of faces is given by

where we use the Taylor series expansion ∑l(2τ)l−1(l−1)!=e2τ. Therefore, from pl(τ)=Nl(τ)/N(τ), we obtain the Poisson distribution with a parameter 2τ

Note that pl is a function of variable l, and τ

is a auxiliary variable to take a temporal snapshot. The mean and the variance of

pl follow 2τ∝logt by the variable transformation between a linear time variable t and a logarithmic time variable τ from the relation for the total number of faces 1+t=2eτ Hayashi11 . Of course they show the asymptotic behavior for a large t.

Thus, in the bell-shaped Poisson distribution of layers, the peak position for the most majority of layers shifts to be deeper, and the width becomes wider as the divisions are iterated. Even if the expanding property can be qualitatively predicted, the logarithmic time-course is not trivial. This simply analyzed property of logt is also related to the deepest level in a random binary tree Hattab01 . However, the Poisson approximation of distribution was not derived.

By using analytical approaches of difference and differential equations, we have more easily derived the fundamental properties for the average lifetime of faces and the distribution of layered faces in the iteratively random binary subdivision of rectangles which is usually treated as a discrete mathematical problem. We remark that Eqs. (2)(4)(7) hold in more general case divided by non-vertical and non-horizontal lines with any angles because of no relation to area and shape of faces.

Our obtained results will be useful for generating road networks in virtual cities Kato00 and dungeons in a RPG Shaker15 , automatically. In a dungeon generation, the layered faces is applicable to a design of corridor placement Shaker15 . In particular, rooms assigned to twin faces are connected with a corridor. Eq. (4) suggests that such rooms exist averagely in 2/3 of the whole rooms for the uniformly random divisions, and a game player can directly wander back and forth between them. When we consider a preferential selection of face according to the depth of layer Eisenstat11 instead of the uniformly random selection, we can control the rate of twin faces. The rate becomes larger as a shallow face is chosen for the division, then balanced similar depths appear. In contrast, it becomes smaller as a deeper face is chosen, then unbalanced various depths appear. So, the rate of 2/3 gives a baseline. On the other hand, the layered faces represent a historical trace of the construction in a road network. Generally, an area of face is smaller as the layer becomes deeper. Thus, long-range access roads tend to be constructed at first, thereafter short-range lanes tend to be added by little and little. A bridge lane that produces twin faces by subdivision may be related to increasing the efficiency of traffic through bypaths on the road network. In the modeling of road networks, we can generate both T-shaped and +

This research is supported in part by a Grant-in-Aid for Scientific Research in Japan, No. 25330100.