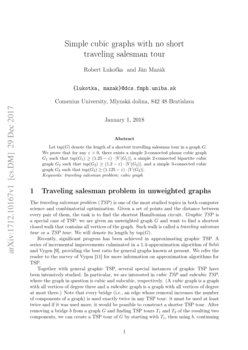 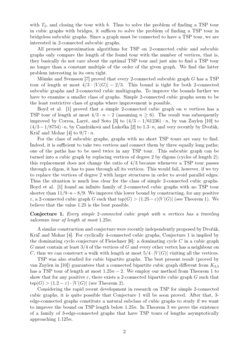 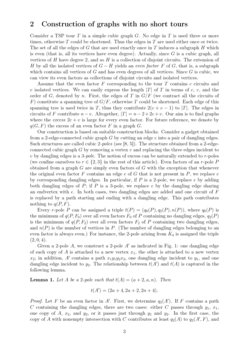 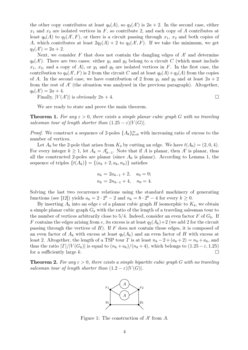 ) is one of the most studied topics in both computer science and combinatorial optimization. Given a set of points and the distance between every pair of them, the task is to find the shortest Hamiltonian circuit.

Graphic TSP is a special case of TSP: we are given an unweighted graph G and want to find a shortest closed walk that contains all vertices of the graph. Such walk is called a traveling salesman tour or a TSP tour. We will denote its length by tsp(G).

Recently, significant progress has been achieved in approximating graphic TSP. A series of incremental improvements culminated in a 1.4-approximation algorithm of Sebö and Vygen [9], providing the best ratio for general graphs known at present. We refer the reader to the survey of Vygen [11] for more information on approximation algorithms for TSP.

All present approximation algorithms for TSP on 2-connected cubic and subcubic graphs only compare the length of the found tour with the number of vertices, that is, they basically do not care about the optimal TSP tour and just aim to find a TSP tour no longer than a constant multiple of the order of the given graph. We find the latter problem interesting in its own right.

For the class of subcubic graphs, graphs with no short TSP tours are easy to find. Indeed, it is sufficient to take two vertices and connect them by three equally long paths; one of the paths has to be used twice in any TSP tour. This subcubic graph can be turned into a cubic graph by replacing vertices of degree 2 by digons (cycles of length 2); this replacement does not change the ratio of 4/3 because whenever a TSP tour passes through a digon, it has to pass through all its vertices. This would fail, however, if we try to replace the vertices of degree 2 with larger structures in order to avoid parallel edges. Thus the situation is much less clear for the class of simple 2-connected cubic graphs. Boyd et al. [1] found an infinite family of 2-connected cubic graphs with no TSP tour shorter than 11/9⋅n−8/9. We improve this lower bound by constructing, for any positive ε, a 2-connected cubic graph G such that tsp(G)>(1.25−ε)|V(G)| (see Theorem 1). We believe that the value 1.25 is the best possible.

Every simple 2-connected cubic graph with n vertices has a traveling salesman tour of length at most 1.25n.

A similar construction and conjecture were recently independently proposed by Dvořák, Kráľ and Mohar [4]. For cyclically 4-connected cubic graphs, Conjecture 1 is implied by the dominating cycle conjecture of Fleischner [6]: a dominating cycle C in a cubic graph G must contain at least 3/4 of the vertices of G and every other vertex has a neighbour on C, thus we can construct a walk with length at most 5/4⋅|V(G)| visiting all the vertices.

Considering the rapid recent development in research on TSP for simple 2-connected cubic graphs, it is quite possible that Conjecture 1 will be soon proved. After that, 3-edge-connected graphs constitute a natural subclass of cubic graphs to study if we want to improve the bound on TSP length below 1.25n. In Theorem 3 we prove the existence of a family of 3-edge-connected graphs that have TSP tours of lengths asymptotically approaching 1.125n.

2 Construction of graphs with no short tours

Consider a TSP tour T in a simple cubic graph G. No edge in T is used three or more times, otherwise T could be shortened. Thus the edges in T are used either once or twice. The set of all the edges of G that are used exactly once in T induces a subgraph H which is even (that is, all its vertices have even degree). Actually, since G is a cubic graph, all vertices of H have degree 2, and so H is a collection of disjoint circuits. The extension of H by all the isolated vertices of G−H yields an even factor F of G, that is, a subgraph which contains all vertices of G and has even degrees of all vertices. Since G is cubic, we can view its even factors as collections of disjoint circuits and isolated vertices.

Assume that the even factor F corresponding to the tour T contains c circuits and v isolated vertices. We can easily express the length |T| of T in terms of c, v, and the order of G, denoted by n. First, the edges of T in G/F (we contract all the circuits of F) constitute a spanning tree of G/F, otherwise T could be shortened. Each edge of this spanning tree is used twice in T, thus they contribute 2(c+v−1) to |T|. The edges in circuits of F contribute n−v. Altogether, |T|=n−2+2c+v. Our aim is to find graphs where the excess 2c+v is large for every even factor. For future reference, we denote by q(G,F) the excess of an even factor F in a graph G.

Our construction is based on suitable construction blocks. Consider a gadget obtained from a 2-edge-connected cubic graph G by cutting an edge e into a pair of dangling edges. Such structures are called cubic 2-poles (see [8, 5]). The structure obtained from a 2-edge-connected cubic graph G by removing a vertex v and replacing the three edges incident to v by dangling edges is a 3-pole. The notion of excess can be naturally extended to r-poles (we confine ourselves to r∈{2,3} in the rest of this article). Even factors of an r-pole P obtained from a graph G are simply even factors of G with the exception that whenever the original even factor F contains an edge e of G that is not present in P, we replace e by corresponding dangling edges. In particular, if P is a 2-pole, we replace e by adding both dangling edges of P; if P is a 3-pole, we replace e by the dangling edge sharing an endvertex with e. In both cases, two dangling edges are added and one circuit of F is replaced by a path starting and ending with a dangling edge. This path contributes nothing to q(P,F).

Next, we consider F that does not contain the dangling edges of A′ and determine q0(A′). There are two cases: either y1 and y2 belong to a circuit C (which must include x1, x2, and a copy of A), or y1 and y2 are isolated vertices in F. In the first case, the contribution to q0(A′,F) is 2 from the circuit C and at least q0(A)+q2(A) from the copies of A. In the second case, we have contribution of 2 from y1 and y2 and at least 2a+2 from the rest of A′ (the situation was analysed in the previous paragraph). Altogether, q0(A′)=2a+4.

We are ready to state and prove the main theorem.

For any ε>0, there exists a simple planar cubic graph G with no traveling salesman tour of length shorter than (1.25−ε)|V(G)|.

We construct a sequence of 2-poles {Ak}∞k=0 with increasing ratio of excess to the number of vertices.

By inserting Ak into an edge e of a planar cubic graph H isomorphic to K4, we obtain a simple planar cubic graph Gk with the ratio of the length of a traveling salesman tour to the number of vertices arbitrarily close to 5/4. Indeed, consider an even factor F of Gk. If F contains the edges arising from e, its excess is at least q2(Ak)+2 (we add 2 for the circuit passing through the vertices of H). If F does not contain those edges, it is composed of an even factor of Ak with excess at least q0(Ak) and an even factor of H with excess at least 2. Altogether, the length of a TSP tour T is at least nk−2+(ak+2)=nk+ak, and thus the ratio |T|/|V(Gk)| is equal to (nk+ak)/(nk+4), which belongs to (1.25−ε,1.25) for a sufficiently large k. ∎

For any ε>0, there exists a simple bipartite cubic graph G with no traveling salesman tour of length shorter than (1.2−ε)|V(G)|.

We construct a sequence of 2-poles {Ak}∞k=0 with increasing ratio of excess to the number of vertices. All the constructed 2-poles are truly bipartite

in the following sense: they do not contain any odd circuit and every path both starting and ending with a dangling edge contains an even number of vertices.

Next, we describe an analogous construction which yields 3-connected simple cubic graphs with no short tours. A 3-pole B is symmetric if for each permutation π of the three dangling edges of B there exists an automorphism of B that permutes the dangling edges according to π. Given a symmetric 3-pole B, we construct a symmetric 3-pole B′′ as indicated in Fig. 2: we take the Petersen graph, remove a vertex, and replace each of the remaining vertices by a copy of B. Note that since B is symmetric, the resulting B′′ is uniquely determined and also symmetric. The relationship between t(B′′) and t(B) is captured in the following lemma.

Next, we determine q2(B′′). Any path C containing two dangling edges can visit at most 8 copies of B (otherwise the Petersen graph would be Hamiltonian; equality is attainable since B is symmetric). There is thus at least one copy not visited by C, which contributes at least b+1, and each of the remaining copies contributes at least b to q2(B′′,F). Altogether, q2(B′′)=9b+1.

For any ε>0, there exists a 3-connected simple cubic graph G with no traveling salesman tour of length shorter than (1.125−ε)|V(G)|.

We construct a sequence of symmetric 3-poles {Bk}∞k=0 with increasing ratio of excess to number of vertices.

Solving the last two recurrence relations by standard methods yields bk=(9k−1)/8 and nk=9k for every k≥0.

Acknowledgements. We are thankful to the anonymous referees for useful suggestions for improving this paper, especially for pointing out that our construction principle is also applicable to bipartite graphs. We acknowledge support from the research grants VEGA 1/0474/15, VEGA 1/0876/16, and APVV-15-0220.