This short note argues that 95 be obtained even without establishing a CLT, by multiplying their widths by 2.3. 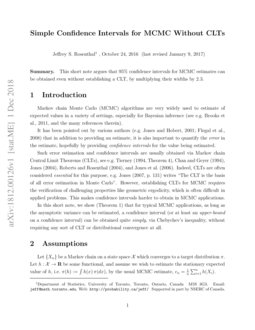 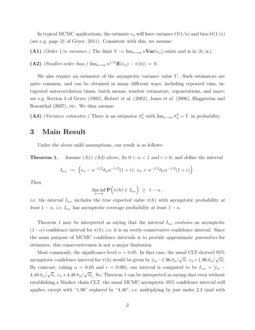 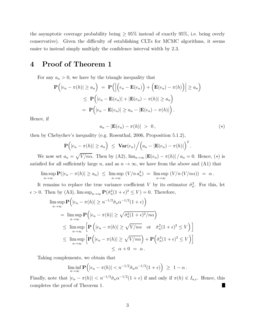 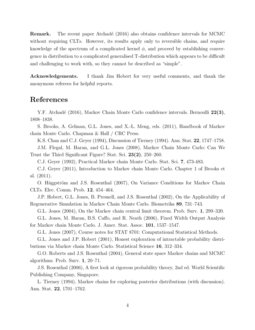 It has been pointed out by various authors (e.g. Jones and Hobert, 2001; Flegal et al., 2008) that in addition to providing an estimate, it is also important to quantify the error in the estimate, hopefully by providing confidence intervals for the value being estimated.

essential for this purpose, e.g. Jones (2007, p. 131) writes “The CLT is the basis of all error estimation in Monte Carlo”. However, establishing CLTs for MCMC requires the verification of challenging properties like geometric ergodicity, which is often difficult in applied problems. This makes confidence intervals harder to obtain in MCMC applications.

In this short note, we show (Theorem LABEL:mainthm

) that for typical MCMC applications, as long as the asymptotic variance can be estimated, a confidence interval (or at least an

upper-bound on a confidence interval) can be obtained quite simply, via Chebychev’s inequality, without requiring any sort of CLT or distributional convergence at all.

Let {Xn} be a Markov chain on a state space \X which converges to a target distribution π. Let h:\X→\IR be some functional, and assume we wish to estimate the stationary expected value of h, i.e. π(h):=∫h(x)π(dx), by the usual MCMC estimate, en=1n∑ni=1h(Xi).

We also require an estimator of the asymptotic variance value V. Such estimators are quite common, and can be obtained in many different ways, including repeated runs, integrated autocorrelation times, batch means, window estimators, regenerations, and more; see e.g. Section 3 of Geyer (1992), Hobert et al. (2002), Jones et al. (2006), Häggström and Rosenthal (2007), etc. We thus assume:

Under the above mild assumptions, our result is as follows:

Most commonly, the significance level α=0.05. In that case, the usual CLT-derived 95% asymptotic confidence interval for π(h) would be given by [en−1.96^σn/√n, en+1.96^σn/√n]. By contrast, taking α=0.05 and ϵ=0.001, our interval is computed to be In,ϵ=[en−4.48^σn/√n, en+4.48^σn/√n]. So, Theorem LABEL:mainthm can be interpreted as saying that even without establishing a Markov chain CLT, the usual MCMC asymptotic 95% confidence interval still applies, except with “1.96” replaced by “4.48”, i.e. multiplying by just under 2.3 (and with the asymptotic coverage probability being ≥95% instead of exactly 95%, i.e. being overly conservative). Given the difficulty of establishing CLTs for MCMC algorithms, it seems easier to instead simply multiply the confidence interval width by 2.3.

For any an>0, we have by the triangle inequality that

Taking complements, we obtain that

The recent paper Atchadé (2016) also obtains confidence intervals for MCMC without requiring CLTs. However, its results apply only to reversible chains, and require knowledge of the spectrum of a complicated kernel ϕ, and proceed by establishing convergence in distribution to a complicated generalised T-distribution which appears to be difficult and challenging to work with, so they cannot be described as “simple”.

I thank Jim Hobert for very useful comments, and thank the anonymous referees for helpful reports.