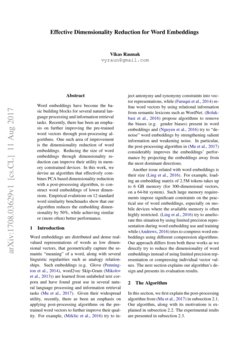 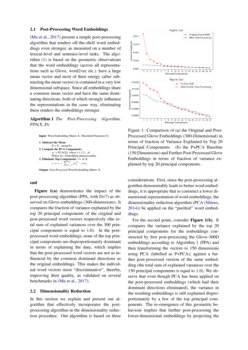 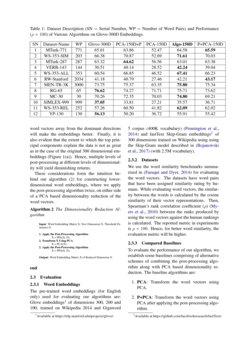 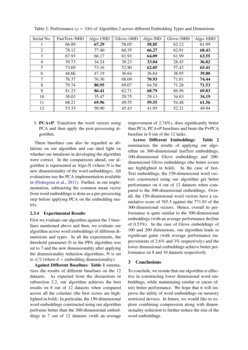 Word embeddings are distributed and dense real-valued representations of words as low dimensional vectors, that geometrically capture the semantic “meaning" of a word, along with several linguistic regularities such as analogy relationships. Such embeddings (e.g. Glove [12], word2vec Skip-Gram [7]) are learned from unlabeled text corpora and have found great use in several natural language processing and information retrieval tasks [9]. Given their widespread utility, recently there has been an emphasis on applying post-processing algorithms on the pre-trained word vectors to further improve their quality. For example, algorithm in [8] tries to inject antonymy and synonymy constraints into vector representations, while [4] tries to refine word vectors by using relational information from semantic lexicons such as WordNet. [3] tries to remove the biases (e.g. gender biases) present in word embeddings and [10] tries to “denoise" word embeddings by strengthening salient information and weakening noise. In particular, the post-processing algorithm in [9] tries to improve word embeddings by projecting the embeddings away from the most dominant directions and considerably improves the embeddings’ performance by making them more discriminative.

Another issue related with word embeddings is their size [6]. For example, loading a word embedding matrix of 2.5M tokens takes up to 6 GB memory (for 300-dimensional vectors, on a 64-bit system). Such large memory requirements impose significant constraints on the practical use of word embeddings, especially on mobile devices where the available memory is often highly restricted. [6] tries to ameliorate this situation by using limited precision representation during word embedding use and training while [1] tries to compress word embeddings using different compression algorithms. Our approach differs from both these works as we directly try to reduce the dimensionality of word embeddings rather than using limited precision representation or compressing individual vector values. In the next section, we explain our algorithm and describe with an example the choices behind its design. The evaluation results are presented subsequently.

In this section, first, the post-processing algorithm from [9] is explained in section 2.1. Our algorithm, along with its motivations is explained in section 2.2. Section 2.3 presents the experimental results on pre-trained Glove 111Available at https://github.com/facebookresearch/fastText/. and fastText Skip-Gram embeddings 222Available at https://nlp.stanford.edu/projects/glove/..

[9] presents a simple post-processing algorithm that renders off-the-shelf word embeddings even stronger, as measured on a number of lexical-level and sentence-level tasks. The algorithm is based on the geometrical observations that the word embeddings (across all representations such as Glove, word2vec etc.) have a large mean vector and most of their energy (after subtracting the mean vector) is located in a subspace of about 8 dimensions. Since, all embeddings share a common mean vector and all embeddings have the same dominating directions, both of which strongly influence the representations in the same way, eliminating them renders the embeddings stronger. A formal description of the post-processing algorithm from [9] is presented below:

Figure 1(a) demonstrates the impact of the post-processing algorithm (PPA, with D=7

Finally, from Figures 1(a) and 1(b), it is also evident that the extent to which the top principal components explain the data in the case of the reduced embeddings is not as great as in the case of the original 300 dimensional embeddings. Hence, multiple levels of post-processing at different levels of dimensionality will yield diminishing returns as the influence of common dominant directions decrease on the word embeddings.

These considerations form the intuition behind our algorithm for constructing lower-dimensional word embeddings, where we apply the post-processing algorithm on either side of a PCA based dimensionality reduction of the word vectors. A formal description of our algorithm is presented as Algorithm 2 (further comments on choosing an appropriate value for parameter D are presented in subsection 2.3.4). Further, in our implementation, subtracting the common mean vector from word embeddings is also done as a pre-processing step before applying PCA on the embedding matrix.

To evaluate the performance of our algorithm, we establish some baselines comprising of alternative schemes of combining the post-processing algorithm along with PCA based dimensionality reduction 333

Further, in our experiments, generic non-linear dimensionality-reduction/manifold-learning techniques such as kernel PCA, autoencoders performed worse than the baselines, presumably because they do not exploit the unique geometrical property of word embeddings as discussed in subsection 2.2.

. The baseline algorithms are:

These baselines can also be regarded as ablations on our algorithm and can shed light on whether our intuitions in developing the algorithm were correct. In the comparisons ahead, our algorithm is represented as Algo-N (where N is the new dimensionality of the word embeddings). For all evaluations, we use the PCA implementation available in [11].

The appropriate value of parameter D could be inferred from the "Variance Explained" vs "Principle Components" plot as in Figure 1. It could be observed that the top 7 components are disproportionately contributing to the variance. Hence, setting D=7 is appropriate as choosing a lower D will not eliminate the disproportionately dominant directions, while choosing a higher D will eliminate useful discriminative information from the word vectors. Further, we show the results at N=d/2 since at this dimension, the reduced embeddings consistently outperform/achieve very close results to the original embeddings. We observed that going below half the dimensions (N<d/2) significantly hurts the performance for all of the baselines.

Against Different Baselines: Table 1 summarizes the results of different baselines on the 12 datasets. As expected from the discussions in Section 2.1, our algorithm achieves the best results on 6 out of 12 datasets when compared across all the columns (the best scores are highlighted in bold). In particular, the 150-dimensional word embeddings constructed using our algorithm performs better than the 300-dimensional embeddings in 7 out of 12 datasets (with an average improvement of 2.74% across the 12 datasets), does significantly better than PCA, PCA+P baselines and beats P+PCA baseline in 8 out of the 12 tasks.

Another interesting observation from Table 2 is that the embeddings generated by reducing Glove-200D to 100 dimensions using our algorithm (Algo-100D) significantly outperform the original Glove-100D embeddings (with an average performance improvement of 6% across all the 12 datasets).

Our algorithm considerably reduces the size of word embeddings while maintaining or improving upon their utility and has a very simple implementation. This will allow the use of word embeddings on memory-constrained devices by significantly reducing the memory requirements. In future, an interesting area to explore would be the application of compressed and limited precision representations on top of dimensionality reduction to further reduce the size of the word embeddings. We are also working on automating our algorithm, by deriving an algorithm to choose D, N and the levels of post-processing automatically, while optimizing for performance.