Sign-Rank Can Increase Under Intersection

The communication class UPP^cc is a communication analog of the Turing Machine complexity class PP. It is characterized by a matrix-analytic complexity measure called sign-rank (also called dimension complexity), and is essentially the most powerful communication class against which we know how to prove lower bounds. For a communication problem f, let f ∧ f denote the function that evaluates f on two disjoint inputs and outputs the AND of the results. We exhibit a communication problem f with UPP(f)= O( n), and UPP(f ∧ f) = Θ(^2 n). This is the first result showing that UPP communication complexity can increase by more than a constant factor under intersection. We view this as a first step toward showing that UPP^cc, the class of problems with polylogarithmic-cost UPP communication protocols, is not closed under intersection. Our result shows that the function class consisting of intersections of two majorities on n bits has dimension complexity n^Ω( n). This matches an upper bound of (Klivans, O'Donnell, and Servedio, FOCS 2002), who used it to give a quasipolynomial time algorithm for PAC learning intersections of polylogarithmically many majorities. Hence, fundamentally new techniques will be needed to learn this class of functions in polynomial time. 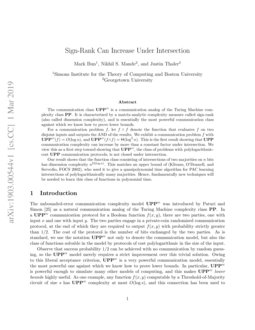 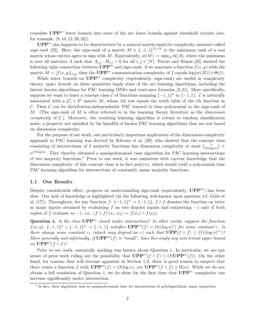 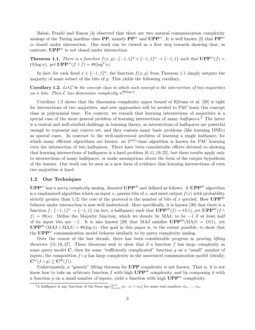 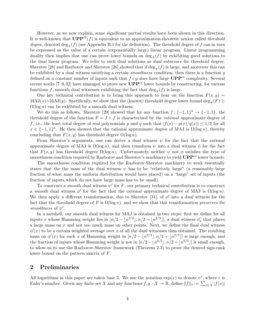 Disjointness through the Lens of Vapnik-Chervonenkis Dimension: Sparsity and Beyond

The disjointness problem - where Alice and Bob are given two subsets of ...
Anup Bhattacharya, et al. ∙

Log-rank and lifting for AND-functions

A Theory of Tournament Representations

with probability strictly greater than

1/2. The cost of the protocol is the number of bits exchanged by the two parties. As is standard, we use the notation UPPcc not only to denote the communication model, but also the class of functions solvable in the model by protocols of cost polylogarithmic in the size of the input.

Observe that success probability 1/2 can be achieved with no communication by random guessing, so the UPPcc model merely requires a strict improvement over this trivial solution. Owing to this liberal acceptance criterion, UPPcc is a very powerful communication model, essentially the most powerful one against which we know how to prove lower bounds. In particular, UPPcc is powerful enough to simulate many other models of computing, and this makes UPPcc lower bounds highly useful. As one example, any function f(x,y) computable by a Threshold-of-Majority circuit of size s has UPPcc complexity at most O(logs), and this connection has been used to translate UPPcc lower bounds into state of the art lower bounds against threshold circuits (see, for example, [12, 26, 10, 32, 8]).

UPPcc also happens to be characterized by a natural matrix-analytic complexity measure called sign-rank [25]. Here, the sign-rank of a matrix M∈{−1,1}N×N is the minimum rank of a real matrix whose entries agree in sign with M. Equivalently, sr(M):=minArk(A), where the minimum is over all matrices A such that Ai,j⋅Mi,j>0 for all i,j∈[N]. Paturi and Simon [25] showed the following tight connection between UPPcc and sign-rank: if we associate a function f(x,y) with the matrix M=[f(x,y)]x,y, then the UPPcc communication complexity of f equals log(sr(M))±Θ(1).

While lower bounds on UPPcc complexity (equivalently, sign-rank) are useful in complexity theory, upper bounds on these quantities imply state of the art learning algorithms, including the fastest known algorithms for PAC learning DNFs and read-once formulas [21, 3]. More specifically, suppose we want to learn a concept class C of functions mapping {−1,1}n to {−1,1}. C is naturally associated with a |C|×2n matrix M, whose ith row equals the truth table of the ith function in C. Then C can be distribution-independently PAC learned in time polynomial in the sign-rank of M. (The sign-rank of M is often referred to in the learning theory literature as the dimension complexity of C.) Moreover, the resulting learning algorithm is robust to random classification noise, a property not satisfied by the handful of known PAC learning algorithms that are not based on dimension complexity.

Despite considerable effort, progress on understanding sign-rank (equivalently, UPPcc) has been slow. Our lack of knowledge is highlighted via the following well-known open question (cf. Göös et al. [17]). Throughout, for any function f:{−1,1}n→{−1,1}, f∧f denotes the function on twice as many inputs obtained by evaluating f on two disjoint inputs and outputting −1 only if both copies of f evaluate to −1, i.e., (f∧f)(x1,x2):=f(x1)∧f(x2).

Is the class UPPcc closed under intersection? In other words, suppose the function f(x,y):{−1,1}n×{−1,1}n→{−1,1} satisfies UPPcc(f)=O((logn)c) for some constant c. Is there always some constant c1 (which may depend on c) such that UPP(f∧f)≤O((logn)c1)? More generally and informally, if UPPcc(f) is “small”, does this imply any non-trivial upper bound on UPPcc(f∧f)?

Prior to our work, essentially nothing was known about Question 1. In particular, we are not aware of prior work ruling out the possibility that UPPcc(f∧f)≤O(UPPcc(f)). On the other hand, for reasons that will become apparent in Section 1.2, there is good reason to suspect that there exists a function f with UPPcc(f)=O(logn), yet UPPcc(f∧f)≥Ω(n). While we do not obtain a full resolution of Question 1, we do show for the first time that UPPcc complexity can increase significantly under intersection.

In fact, for each fixed x∈{−1,1}n, the function f(x,y) from Theorem 1.1 simply outputs the majority of some subset of the bits of y. This yields the following corollary.

Let C be the concept class in which each concept is the intersection of two majorities on n bits. Then C has dimension complexity nΘ(logn).

UPPcc has a query complexity analog, denoted UPPdt and defined as follows. A UPPdt algorithm is a randomized algorithm which on input x, queries bits of x, and must output f(x) with probability strictly greater than 1/2; the cost of the protocol is the number of bits of x queried. How UPPdt behaves under intersection is now well understood. More specifically, it is known [30] that there is a function f:{−1,1}n→{−1,1} (in fact, a halfspace) such that UPPdt(f)=O(1), yet UPPdt(f∧f)=Θ(n). Define the Majority function, which we denote by MAJ, to be −1 if at least half of its input bits are −1. It is also known [29] that MAJ satisfies UPPdt(MAJ)=O(1), yet UPPdt(MAJ∧MAJ)=Θ(logn). Our goal in this paper is, to the extent possible, to show that the UPPcc communication model behaves similarly to its query complexity analog.

Over the course of the last decade, there has been considerable progress in proving lifting theorems [27, 16, 15]. These theorems seek to show that if a function f has large complexity in some query model C, then for some “sufficiently complicated” function g on a “small” number of inputs, the composition f∘g has large complexity in the associated communication model (ideally, Ccc(f∘g)≳Cdt(f)).

However, as we now explain, some significant partial results have been shown in this direction. It is well-known that UPPdt(f) is equivalent to an approximation-theoretic notion called threshold degree, denoted deg±(f) (see Appendix B.1 for the definition). The threshold degree of f

can in turn be expressed as the value of a certain (exponentially large) linear program. Linear programming duality then implies that one can prove lower bounds on

deg±(f) by exhibiting good solutions to the dual linear program. We refer to such dual solutions as dual witnesses for threshold degree. Sherstov [28] and Razborov and Sherstov [26] showed that if deg±(f) is large, and moreover this can be exhibited by a dual witness satisfying a certain smoothness condition, then there is a function g defined on a constant number of inputs such that f∘g does have large UPPcc complexity. Several recent works [8, 7, 9, 32] have managed to prove new UPPcc lower bounds by constructing, for various functions f, smooth dual witnesses exhibiting the fact that deg±(f) is large.

Our key technical contribution is to bring this approach to bear on the function F(x,y)=MAJ(x)∧MAJ(y). Specifically, we show that the (known) threshold degree lower bound deg±(F)≥Ω(logn) can be exhibited by a smooth dual witness.

From Sherstov’s arguments, one can derive a dual witness ψ for the fact that the rational approximate degree of MAJ is Ω(logn), and then transform ψ into a dual witness ϕ for the fact that F(x,y) has threshold degree Ω(logn). Unfortunately, neither ψ nor ϕ satisfies the type of smoothness condition required by Razborov and Sherstov’s machinery to yield UPPcc lower bounds.

has to be “relatively large” (a reasonably large fraction of what mass the uniform distribution would have placed) on a “large” set of inputs (the fraction of inputs which do not have large mass has to be small).

Paturi and Simon [25] showed the following equivalence between the sign-rank of a matrix and the UPPcc cost of its corresponding communication game.

In a breakthrough result, Forster [12] proved that an upper bound on the spectral norm of a sign matrix implies a lower bound on its sign-rank. Razborov and Sherstov [26] established a generalization of Forster’s theorem [12] that can be used to prove sign-rank lower bounds for pattern matrices. Specifically, we require the following result, implicit in their work [26, Theorem 1.1].

Then, the sign-rank of the (N,n,f)-pattern matrix M can be bounded below as

Suppose there exist functions ψ0,ψ1:{−1,1}n→R that are not identically 0 and satisfy the following properties:

Then there exist functions A,B:{−1,1}nt→R such that Ψ=1δA−1εB satisfies the following properties.

3 A Smooth Dual Witness for Majority

Our main technical contribution in this paper is captured in Theorem 3.1 below. This theorem constructs a smooth dual witness R for the hardness of rationally approximating the sign function on {0,±1,…,±n} (cf. Appendix B for details of this interpretation of Theorem 3.1). We defer the proof until Section 4.

be odd. There exists a function

The following theorem shows how to convert the (univariate) function R from Theorem 3.1 into a dual witness for the (multivariate) MAJ function.

We are ready to derive a lower bound on the sign-rank of the (4n2,4n,OR2∘MAJ2n)-pattern matrix.

Plugging f=OR2∘MAJ2n and ϕ=Ψ∥Ψ∥1 into Theorem 2.3, we conclude that the sign-rank of the (4n2,4n,OR2∘MAJ2n) pattern matrix M is bounded below as

We are now ready to prove Theorem 1.1.

Denote by f the communication game corresponding to the (2n2,2n,MAJ2n) pattern matrix. For completeness, we now sketch a standard UPPcc protocol of cost O(logn) for f. Note that Alice holds 2n2 input bits, and Bob holds a (2n⋅logn)-bit string indicating the “relevant bits” in each block of Alice’s input and a 2n-bit string w. Bob sends Alice the index of a uniformly random relevant bit using log(2n2) bits of communication. Alice responds with her value b of that input bit, and Bob outputs b⊕wi. It is easy to check that this is a valid UPPcc protocol, and it has cost O(logn).

One can verify by the definition of pattern matrices (Definition 2.2) that the communication game corresponding to the (4n2,4n,AND2∘MAJ2n) pattern matrix M′ equals f∧f. By Theorem 2.1 and Equation (16), we obtain that

Corollary 1.2 follows immediately from the previous proof and the definition of pattern matrices.

The rest of this paper is dedicated towards proving Theorem 3.1. Before proving the theorem, we describe the main auxiliary construction and prove some preliminary facts about it.

The following claim tells us that for any u∈{1,…,⌊n2/3⌋}, the function pu places a reasonably large mass on input −u.

The next claim tells us that the mass placed by pu on other points in its support is small.