SI-Score: An image dataset for fine-grained analysis of robustness to object location, rotation and size

Before deploying machine learning models it is critical to assess their robustness. In the context of deep neural networks for image understanding, changing the object location, rotation and size may affect the predictions in non-trivial ways. In this work we perform a fine-grained analysis of robustness with respect to these factors of variation using SI-Score, a synthetic dataset. In particular, we investigate ResNets, Vision Transformers and CLIP, and identify interesting qualitative differences between these. 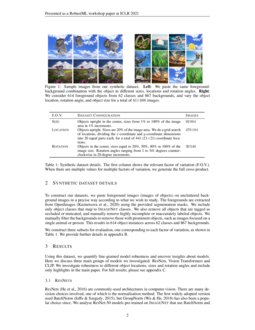 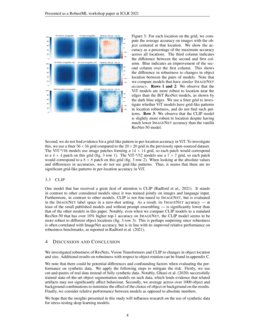 Are Transformers a Modern Version of ELIZA? Observations on French Object Verb Agreement

In practice we would like to deploy models which are robust to certain changes in their input. For some of these factors, such as weather conditions, compression artifacts, or even different object orientations, existing datasets can be readily applied to quantify models’ robustness, e.g. barbu2019objectnet; hendrycks2018benchmarking. However, for other important factors such as object size or location, the effect on model performance had not yet been quantified prior to our work. This is particularly concerning because many popular image datasets suffer from photographer’s bias (DBLP:conf/cvpr/TorralbaE11), where objects appear mostly in the center of the image.

, we open-sourced a synthetic dataset for fine-grained evaluation:

SI-Score (Synthetic Interventions on Scenes for Robustness Evaluation). In a nutshell, we paste a large collection of objects onto uncluttered backgrounds (Figure 1), and can thus conduct controlled studies by systematically varying the object class, size, location, and orientation. We also provided extendable code for researchers to generate similar synthetic datasets and analyse the results.111The synthetic dataset and code used to generate the dataset are available on GitHub and CVF at https://github.com/google-research/si-score.

In this work, we take a step forward and identify interesting qualitative differences between model classes. In particular, we investigate how models based on convolutions (ResNets (he2016deep)) compare to models based on attention, specifically Vision Transformers (ViT) (dosovitskiy2020vit). Moreover, we evaluate CLIP (2021clip), a model trained jointly on text and images on large-scale web data and evaluated zero-shot.

Related work Creating synthetic datasets by pasting objects onto backgrounds has been used for training (zhao2020distilling; dwibedicutpaste2017; ghiasi2020copypaste) and evaluating models (bit), but previous works do not systematically vary object size, location or orientation, or analyse translation and rotation robustness only at the image level (engstrom2017)

. GANs have also been used to generate counterfactual images to detect bias, specifically to evaluate the effects of features such as makeup or beards on classifiers

We include further related work on synthetic data generation and robustness datasets in appendix A.

To construct our datasets, we paste foreground images (images of objects) on uncluttered background images in a precise way according to what we wish to study. The foregrounds are extracted from OpenImages (OpenImages) using the provided segmentation masks. We include only object classes that map to ImageNet classes. We also remove all objects that are tagged as occluded or truncated, and manually remove highly incomplete or inaccurately labeled objects. We manually filter the backgrounds to remove those with prominent objects, such as images focused on a single animal or person. This results in 614 object instances across 62 classes and 867 backgrounds.

We construct three subsets for evaluation, one corresponding to each factor of variation, as shown in Table 1. We provide further details in appendix B.

Using this dataset, we quantify fine-grained model robustness and uncover insights about models. Here we discuss three main groups of models we investigated: ResNets, Vision Transformers and CLIP. We investigate robustness to different object locations, sizes and rotation angles and include only highlights in the main paper. For full results, please see appendix C.

are commonly-used architectures in computer vision. There are many decision choices involved, one of which is the normalisation method. The first widely adopted version used BatchNorm

(ioffe2015batch), but GroupNorm (wu2018group) has also been a popular choice since. We analyse ResNet-50 models pre-trained on ImageNet that use BatchNorm and GroupNorm respectively, and find three qualitative differences between them. First, the model that uses GroupNorm has higher accuracy on smaller objects, whereas the model that uses BatchNorm has higher accuracy on objects that take up at least 40% of the image (fig. 2 left). Note that most objects usually take up less than 40% of the image - for example, in a self-driving scenario, each object of interest in the driver’s field of view typically occupies less than 40% of it. Because of this, this tradeoff would generally be more favorable for the ResNet-50 that uses GroupNorm. Second, the model that uses BatchNorm is less robust to changes in location than the model using GroupNorm (fig. 2 right). For this experiment we use objects occupying 20% of the image. Thirdly, it seems that ResNets using GroupNorm are also slightly more robust to changes in object orientation (rotation angle) (fig. 2 bottom). Note that we measure the robustness relative to the model’s best accuracy across locations or rotation angle respectively, so differences in absolute accuracy are accounted for. In future work, we hope to investigate whether these differences are present at scale when training on larger datasets and architectures.

ImageNet accuracy. Specifically, we use BigTransfer (BiT) (bit) models, which are ResNets using GroupNorm that were pre-trained on the same datasets and fine-tuned on ImageNet with high resolution. Absolute robustness is highly correlated with ImageNet accuracy (taori2020measuring; djolonga2020robustness), therefore, we compare models with similar ImageNet accuracy to account for this confounder.

First, we find that ViT models have much higher relative accuracy when the object of interest is placed close to the edges of the image (fig. 3

rows 1 and 2). One potential explanation is that BiT models have zero padding in the convolutions, whereas ViT models do not have such padding. At the same time, in non-central, non-edge parts of the image, ViT models seem to be slightly more location-robust than BiT models in most but not all locations.

One model that has received a great deal of attention is CLIP (2021clip). It stands in contrast to other considered models since it was trained jointly on images and language input. Furthermore, in contrast to other models, CLIP is not fine-tuned to ImageNet, but is evaluated in the ImageNet label space in a zero-shot setting. As a result, its ImageNet accuracy — at least of the small published models and without prompt ensembling — is significantly lower than that of the other models in this paper. Notably, even when we compare CLIP models to a standard ResNet-50 that has over 10% higher top-1 accuracy on ImageNet, the CLIP model seems to be more robust to different object locations (fig. 3 row 3). This is perhaps surprising since robustness is often correlated with ImageNet accuracy, but is in line with its improved relative performance on robustness benchmarks, as reported in 2021clip.

We investigated robustness of ResNets, Vision Transformers and CLIP to changes in object location and size. Additional results on robustness with respect to object rotation can be found in appendix C.

We note that there could be potential differences and confounding factors when evaluating the performance on synthetic data. We apply the following steps to mitigate the risk: Firstly, we use cut-and-pastes of real data instead of fully synthetic data. Notably, ghiasi2020copypaste successfully trained state-of-the-art object segmentation models on such data, which lends evidence that related artifacts may not significantly affect behaviour. Secondly, we average across over 1000 object and background combinations to minimize the effect of the choice of object or background on the results. Finally, we consider relative performance between models as opposed to absolute numbers.

We hope that the insights presented in this study will influence research on the use of synthetic data for stress-testing deep learning models.

In this section, we describe related work on synthetic data generation and datasets to measure robustness.

Other efforts on synthetic data generation include CLEVR (DBLP:conf/cvpr/JohnsonHMFZG17), which aims to evaluate compositional generalisation, dSprites (dsprites17), which aims to evaluate disentanglement of latent features, or smallNorb (DBLP:conf/cvpr/LeCunHB04), which is also an object classification dataset, albeit with different factors of variation except rotation. These datasets use rendered shapes or models of geometric shapes or toys instead of realistic photos of ImageNet classes with photo backgrounds.

Our work focuses on synthetic data to analyse specific factors of variation. Other datasets to analyse robustness mostly include natural datasets. For example, ImageNet-R presents a dataset of alternatively rendered imagery ranging from cartoons to origami  (hendrycks2020many). ImageNet-Vid (ILSVRC15) uses frames from video sequences, and ImageNet-Vid-Robust measures whether model predictions are correct and consistent across similar frames (imnetvid). Finally, ImageNet-C (hendrycks2018benchmarking) uses synthetic image-level perturbations on natural images to analyse robustness with respect to perturbations such as Gaussian noise, JPEG compression, variations in image brightness or motion blur. SI-Score focuses on object-level as opposed to image-level factors of variation.

We include further details on the synthetic dataset in this section.

We construct three subsets for evaluation, one corresponding to each factor of variation we wanted to investigate (object size, location and rotation), as shown in Table 2. The table is repeated here for easy reference. For each object instance, we sample two backgrounds, and for each of these object-background combinations, we take a cross product over all the factors of variation. For the datasets with multiple values for more than one factor of variation, we take a cross product of all the values for each factor of variation in the set. For example, for the rotation angle dataset, there are four object sizes and 18 rotation angles, so we do a cross product and have 72 factor of variation combinations. For the object size and rotation datasets, we only consider images where objects are at least 95% in the image. For the location dataset, such filtering removes almost all images where objects are near the edges of the image, so we do not do such filtering. Note that since we use the central coordinates of objects as their location, at least 25% of each object is in the image even if we do not do any filtering.

Image licenses  The backgrounds are images from nature taken from pexels.com. The license therein allows one to reuse photos with modifications.

The object size and rotation plots are in Figure 2 in the main paper.

We compare BigTransfer (BiT) (bit) and Vision Transformer (ViT) (dosovitskiy2020vit) model pairs that have similar ImageNet accuracy. We include a ViT-L/32 model in the location study to investigate whether there is a grid-like pattern in location robustness.

The plot comparing the location robustness of the ResNet-50 (GroupNorm) with the CLIP model using a ResNet-50 backbone is in Figure 3 (bottom row) in the main paper.