The performance of speaker verification systems degrades when vocal effort conditions between enrollment and test (e.g., shouted vs. normal speech) are different. This is a potential situation in non-cooperative speaker verification tasks. In this paper, we present a study on different methods for linear compensation of embeddings making use of Gaussian mixture models to cluster shouted and normal speech domains. These compensation techniques are borrowed from the area of robustness for automatic speech recognition and, in this work, we apply them to compensate the mismatch between shouted and normal conditions in speaker verification. Before compensation, shouted condition is automatically detected by means of logistic regression. The process is computationally light and it is performed in the back-end of an x-vector system. Experimental results show that applying the proposed approach in the presence of vocal effort mismatch yields up to 13.8 improvement with respect to a system that applies neither shouted speech detection nor compensation. 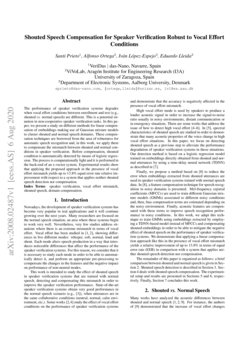 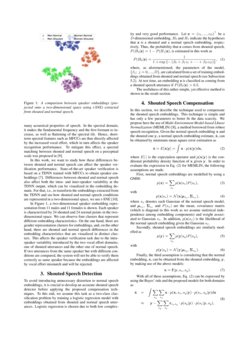 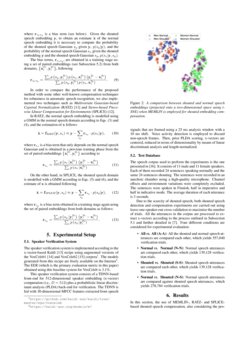 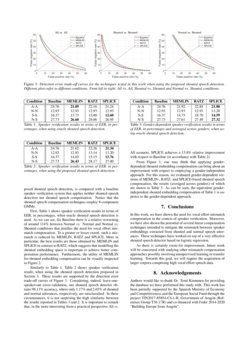 Nowadays, the development of speaker verification systems has become very popular in real applications and it will continue growing over the next years. Many researchers are focused on the normal speech situation, an area where these systems begin to work very well. Nevertheless, very few studies address situations where there is an extreme mismatch in terms of vocal effort. Vocal effort has been studied in [1, 2], showing differences in five different modes: whisper, soft, normal, loud and shout. Each mode alters speech production in a way that introduces noticeable differences that affect the performance of the speaker verification systems. For this reason, we consider that it is necessary to study each mode in order to be able to automatically detect it, and perform an appropriate pre-processing to compensate the changes in the features and the negative impact on performance of non-neutral modes.

High vocal effort mode is used by speakers to produce a louder acoustic signal in order to increase the signal-to-noise ratio usually in noisy environments, distant communication or in emergency situations. There are some works that address the issue of how to detect high vocal effort

, spectral characteristics of shouted speech are studied in order to demonstrate that many acoustic properties of the voice change in high vocal effort situations. In this paper, we focus on detecting shouted speech as a previous step to alleviate the performance degradation of speaker verification systems in those situations. Our detection method is based on a logistic regression model trained on embeddings directly obtained from shouted and normal utterances by using a time-delay neural network (TDNN) as described in

Finally, we propose a method based on [8] to reduce the error when embeddings extracted from shouted utterances are used in speaker verification systems trained with normal speech data. In [8]

, a feature compensation technique for speech recognition in noisy domains is presented. Mel-frequency cepstral coefficients (MFCCs) are used to train different Gaussian mixture models (GMMs) associated to different noisy conditions and, then, bias compensation terms are estimated depending on the noisy environment. Finally, acoustic features are compensated with these terms to improve speech recognition performance in noisy conditions. In this work, we adapt this technique to train GMMs using embeddings extracted by employing a TDNN-based model instead of MFCCs and compensating shouted embeddings in order to be able to mitigate the negative effect of shouted speech on the performance of speaker verification systems. We demonstrate that applying a linear compensation approach like this in the presence of vocal effort mismatch yields a relative improvement of up to 13.8% in terms of equal error rate (EER) in comparison with a system that applies neither shouted speech detection nor compensation.

The remainder of this paper is organized as follows: a brief comparison between shouted and normal speech is given in Section 2. Shouted speech detection is described in Section 3. Section 4 deals with shouted speech compensation. The experimental setup and results are presented in Sections 5 and 6, respectively. Finally, Section 7 concludes this work.

Many works have analyzed the acoustic differences between shouted and normal speech [1, 2, 9]. For instance, the authors of [9] demonstrated that the increase of vocal effort changes many acoustical properties of speech. In the spectral domain, it makes the fundamental frequency and the first formant to increase, as well as flattening of the spectral tilt. Hence, short-term spectral features such as MFCCs are thus directly affected by the increased vocal effort, which in turn affects the speaker recognition performance. To mitigate this effect, a spectral matching between shouted and normal speech on a perceptual scale was proposed in [9].

In Figure 1, a two-dimensional speaker embedding representation from 11 males and 11 females is shown. Each speaker is characterized by 24 shouted and 24 normal points in the two-dimensional space. We can observe four clusters that represent different embedding characteristics. On the one hand, there are gender representation clusters for embeddings, and, on the other hand, there are shouted and normal speech differences in the embedding characteristics that are visualized in distinct clusters. This affects the speaker verification task due to the intra-speaker variability introduced by the two vocal effort domains, one of shouted utterances and the other one of normal speech. If two utterances from the same speaker but with different conditions are compared, the system will not be able to verify them correctly as same speaker because the embeddings are affected by vocal effort mismatch and will be rejected.

To avoid introducing unnecessary distortion to normal speech embeddings, it is crucial to develop an accurate shouted speech detector before applying the proposed compensation techniques. To this end, we assume this task as a two-class classification problem by training a logistic regression model with embeddings obtained from shouted and normal speech utterances. Logistic regression is chosen due to both low complexity and very good performance. Let z=(z1,...,zD)⊤ be a D-dimensional embedding, H0 and H1 indicate the hypotheses that z

is a shouted and a normal speech embedding, respectively. Thus, the probability that

where, as aforementioned, the parameters of the model, {βj;j=0,...,D}, are calculated from a set of training embeddings obtained from shouted and normal speech (see Subsection 5.2). At test time, an embedding z

is classified as coming from a shouted speech utterance if

The usefulness of this rather simple, yet effective method is shown in the result section.

where E[⋅] is the expectation operator and p(x|y)

is the conditional probability density function of

x given y. In order to evaluate the expression in Eq. (2) for MEMLIN, the following assumptions are made.

First, normal speech embeddings are modelled by using a GMM:

Finally, the third assumption is considering that the normal embedding, x, can be obtained from the shouted embedding, y, by making use of the above models:

With all of these assumptions, Eq. (2) can be expressed by using the Bayes’ rule and the proposed models for both domains as

The bias terms, rsxsy, are obtained in a training stage using a set of paired embeddings (see Subsection 5.2) from both domains, {xTri,yTri}, following

In order to compare the performance of the proposed method with some other well-known compensation techniques for robustness in automatic speech recognition, we also implemented two techniques such as Multivariate Gaussian-based Cepstral Normalization (RATZ) [11] and Stereo-based Piecewise LInear Compensation for Environments (SPLICE) [12].

where rsx is a bias term that only depends on the normal speech Gaussian and is obtained in a previous training phase from the set of paired embeddings {xTri,yTri} according to

On the other hand, in SPLICE, the shouted speech domain is modelled with a GMM according to Eqs. (5) and (6), and the estimate of x is obtained following

where rsy is a bias term obtained in a training stage again using the set of paired embeddings from both domains as follows:

The speaker verification system is implemented according to the x-vector-based Kaldi [13] recipe using augmented versions of the VoxCeleb1 [14] and VoxCeleb2 [15] corpora111https://github.com/kaldi-asr/kaldi/tree/master/egs/voxceleb. The models generated from this recipe are freely available on the Internet222https://kaldi-asr.org/models/m7

. The EER (which is the primary evaluation metric in this paper) obtained using this baseline system for VoxCeleb is 3.1%.

) plus a probabilistic linear discriminant analysis (PLDA) back-end for verification. The TDNN is fed with 30-dimensional MFCC features extracted from speech signals that are framed using a 25 ms analysis window with a 10 ms shift. Voice activity detection is employed to discard non-speech frames. Then, prior PLDA scoring, x-vectors are centered, reduced in terms of dimensionality by means of linear discriminant analysis and length-normalized.

The speech corpus used to perform the experiments is the one presented in [16]. It consists of 11 male and 11 female speakers. Each of them recorded 24 sentences speaking normally and the same 24 sentences shouting. The sentences were recorded in an anechoic chamber using a high-quality microphone. Channel effects and environment variations were completely excluded. The sentences were spoken in Finnish, half in imperative and half in indicative mode. The average duration of each utterance is 3 seconds.

Due to the scarcity of shouted speech, both shouted speech detection and compensation experiments are carried out using leave-one-speaker-out cross-validation to maximize the number of trials. All the utterances in the corpus are processed to extract x-vectors according to the process outlined in Subsection 5.1 and further detailed in [7]. Four different conditions are considered for experimental evaluation:

First, Table 1 shows speaker verification results in terms of EER, in percentages, when oracle shouted speech detection is used. As we can see, for Baseline there is a relative worsening of around 114% between Normal vs. Normal and Normal vs. Shouted conditions that justifies the need for vocal effort mismatch compensation. To a greater or lesser extent, such a mismatch is reduced by MEMLIN, RATZ and SPLICE. More in particular, the best results are those obtained by MEMLIN and SPLICE in contrast to RATZ, which suggests that modelling the shouted embedding space is important to achieve better compensation performance. Furthermore, the utility of MEMLIN for shouted embedding compensation can be visually inspected in Figure 2.

Similarly to Table 1, Table 2 shows speaker verification results when using the shouted speech detection proposed in Section 3. These results are supported by the detection error trade-off curves of Figure 3. Considering, indeed, leave-one-speaker-out cross-validation, our shouted speech detector obtains 98.11% accuracy, where only 1.17% and 2.65% of shouted and normal utterances, respectively, are misclassified. In these circumstances, it is not surprising the high similarity between the results reported in Tables 1 and 2. It is important to remark that, in the more interesting from a practical perspective All vs. All scenario, SPLICE achieves a 13.8% relative improvement with respect to Baseline (in accordance with Table 2).

In this work, we have shown the need for vocal effort mismatch compensation in the context of speaker verification. Moreover, we have also shown the potential of several linear compensation techniques intended to mitigate the mismatch between speaker embeddings extracted from shouted and normal speech utterances. These techniques have worked on top of a very effective shouted speech detector based on logistic regression.

As there is certainly room for improvement, future work will be concerned with studying other mismatch compensation approaches possibly involving unsupervised learning or transfer learning. Towards this goal, we will require the acquisition of larger corpora comprising high vocal effort speech data.

Authors would like to thank Dr. Tomi Kinnunen for providing the database we have performed this study with. This work has been partially supported by the Spanish Ministry of Economy and Competitiveness and the European Social Fund through the project TIN2017-85854-C4-1-R, Government of Aragón (Reference Group T36_17R) and co-financed with Feder 2014-2020 “Building Europe from Aragón”.