Let G be a simple n-vertex graph and c be a colouring of E(G) with n colours, where each colour class has size at least 2. We prove that G contains a rainbow cycle of length at most n/2, which is best possible. Our result settles a special case of a strengthening of the Caccetta-Häggkvist conjecture, due to Aharoni. We also show that the matroid generalization of our main result also holds for cographic matroids, but fails for binary matroids. 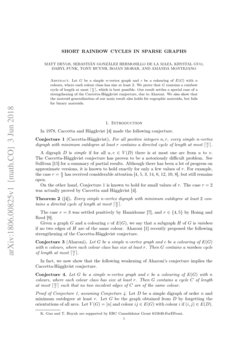 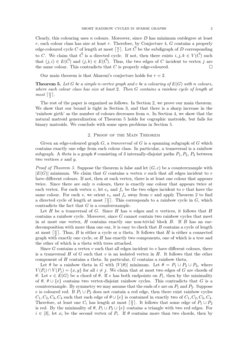 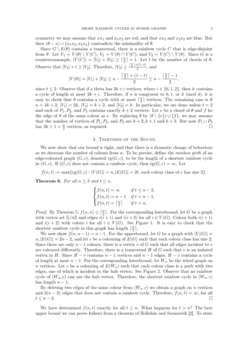 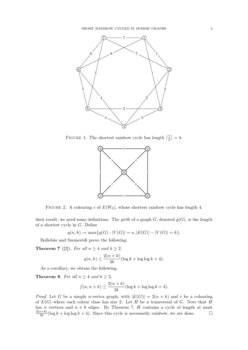 Erdős-Pósa property of chordless cycles and its applications

A chordless cycle in a graph G is an induced subgraph of G which is a cy...
Eun Jung Kim, et al. ∙

On a Generalization of the Marriage Problem

Recently, a conjecture due to Hendry was disproved which stated that eve...
Manuel Lafond, et al. ∙

A Timecop's Chase Around the Table

We consider the cops and robber game variant consisting of one cop and o...
Nils Morawietz, et al. ∙

We exhibit a family of neural networks of McCulloch and Pitts of size 2n...
Renè Ndoundam, et al. ∙

For all positive integers n,r, every simple n-vertex digraph with minimum outdegree at least r contains a directed cycle of length at most ⌈nr⌉.

A digraph D is simple if for all u,v∈V(D) there is at most one arc from u to v. The Caccetta-Häggkvist conjecture has proven to be a notoriously difficult problem. See Sullivan [15] for a summary of partial results. Although there has been a lot of progress on approximate versions, it is known to hold exactly for only a few values of r. For example, the case r=n3 has received considerable attention [4, 5, 3, 14, 6, 12, 10, 8], but still remains open.

On the other hand, Conjecture 1 is known to hold for small values of r. The case r=2 was actually proved by Caccetta and Häggkvist [4].

Every simple n-vertex digraph with minimum outdegree at least 2 contains a directed cycle of length at most ⌈n2⌉.

Given a graph G and a colouring c of E(G), we say that a subgraph H of G is rainbow if no two edges of H are of the same colour. Aharoni (see [1]) recently proposed the following strengthening of the Caccetta-Häggkvist conjecture.

Let G be a simple n-vertex graph and c be a colouring of E(G) with n colours, where each colour class has size at least r. Then G contains a rainbow cycle of length at most ⌈nr⌉.

In fact, we now show that the following weakening of Aharoni’s conjecture implies the Caccetta-Häggkvist conjecture.

Let G be a simple n-vertex graph and c be a colouring of E(G) with n colours, where each colour class has size at least r. Then G contains a cycle C of length at most ⌈nr⌉ such that no two incident edges of C are of the same colour.

Let D be a simple digraph of order n and minimum outdegree at least r. Let G be the graph obtained from D by forgetting the orientations of all arcs. Let V(G)=[n] and colour ij∈E(G) with colour i if (i,j)∈E(D). Clearly, this colouring uses n colours. Moreover, since D has minimum outdegree at least r, each colour class has size at least r. Therefore, by Conjecture 4, G contains a properly edge-coloured cycle C of length at most ⌈nr⌉. Let →C be the subdigraph of D corresponding to C. We claim that →C is a directed cycle. If not, then there exists i,j,k∈V(→C) such that (j,i)∈E(→C) and (j,k)∈E(→C). Thus, the two edges of C incident to vertex j are the same colour. This contradicts that C is properly edge-coloured. ∎

Our main theorem is that Aharoni’s conjecture holds for r=2.

Let G be a simple n-vertex graph and c be a colouring of E(G) with n colours, where each colour class has size at least 2. Then G contains a rainbow cycle of length at most ⌈n2⌉.

The rest of the paper is organized as follows. In Section 2, we prove our main theorem. We show that our bound is tight in Section 3, and that there is a sharp increase in the ‘rainbow girth’ as the number of colours decreases from n. In Section 4, we show that the natural matroid generalization of Theorem 5 holds for cographic matroids, but fails for binary matroids. We conclude with some open problems in Section 5.

2. Proof of the Main Theorem

Given an edge-coloured graph G, a transversal of G is a spanning subgraph of G which contains exactly one edge from each colour class. In particular, a transversal is a rainbow subgraph (which may contain isolated vertices). A theta is a graph θ consisting of 3 internally-disjoint paths P1,P2, P3 between two vertices x and y.

Suppose the theorem is false and let (G,c) be a counterexample with |E(G)| minimum. By minimality, each colour class contains exactly two edges. We claim that G contains a vertex v such that all edges incident to v have different colours. If not, then at each vertex, there is at least one colour that appears twice. Since there are only n colours, there is exactly one colour that appears twice at each vertex. For each vertex v, let ev and fv be the two edges incident to v that have the same colour. For each v, we orient ev and fv away from v and apply Theorem 2 to find a directed cycle of length at most ⌈n2⌉. This corresponds to a rainbow cycle in G, which contradicts the fact that G is a counterexample.

Let H be a transversal of G. Since H has n edges and n vertices, it follows that H contains a rainbow cycle. Moreover, since G cannot contain two rainbow cycles that meet in at most one vertex, H contains exactly one non-trivial block B. Suppose B has an ear decomposition with at least two ears. In this case, |V(B)|≤n−2, since B contains at most n edges. Since B contains at least two ears, B contains two cycles meeting in at most two vertices, or B contains a subdivision of K4. In either case, B contains a cycle of length at most ⌈n2⌉. Thus, B contains at most one ear. That is, B is a cycle or a theta. It follows that H is either a connected graph with exactly one cycle, or H has exactly two components, one of which is a tree and the other of which is a theta with trees attached.

3. Tightness of the Bound

We now show that our bound is tight, and that there is a dramatic change of behaviour as we decrease the number of colours from n. To be precise, define the rainbow girth of an edge-coloured graph (G,c), denoted rg(G,c), to be the length of a shortest rainbow cycle in (G,c). If (G,c) does not contain a rainbow cycle, then rg(G,c)=∞. Let

We now show f(n,n−1)=n−1. For the upperbound, let G be a graph with |V(G)|=n,|E(G)|=2n−2, and let c be a colouring of E(G) such that each colour class has size 2. Since there are only n−1 colours, there is a vertex v of G such that all edges incident to v are coloured differently. Therefore, there is a transversal H of G such that v is an isolated vertex in H. Since H−v contains n−1 vertices and n−1 edges, H−v contains a cycle of length at most n−1. For the corresponding lowerbound, let Wn be the wheel graph on n vertices. Let c be a colouring of E(Wn) such that each colour class is a path with two edges, one of which is incident to the hub vertex. See Figure 2. Observe that no rainbow cycle of (Wn,c) can use the hub vertex. Therefore, the shortest rainbow cycle in (Wn,c) has length n−1.

By deleting two edges of the same colour from (Wn,c) we obtain a graph on n vertices and 2(n−2) edges that does not contain a rainbow cycle. Therefore, f(n,t)=∞, for all t≤n−2. ∎

We have determined f(n,t) exactly for all t≤n. What happens for t>n? The best general upper bound we can prove follows from a theorem of Bollobás and Szemerédi [2]. To state their result, we need some definitions. The girth of a graph G, denoted g(G), is the length of a shortest cycle in G. Define

As a corollary, we obtain the following.

Let G be a simple n-vertex graph, with |E(G)|=2(n+k) and c be a colouring of E(G) where each colour class has size 2. Let H be a transversal of G. Note that H has n vertices and n+k edges. By Theorem 7, H contains a cycle of length at most 2(n+k)3k(logk+loglogk+4). Since this cycle is necessarily rainbow, we are done. ∎

In this section, we assume basic familiarity with matroids, and we follow the notation of Oxley [11]. An attractive feature of Aharoni’s conjecture as opposed to the Caccetta-Häggkvist conjecture, is that there is a natural matroid generalization.

Let M be a simple rank-(n−1) matroid and c be a colouring of E(M) with n colours, where each colour class has size at least 2. Then M contains a rainbow circuit of size at most ⌈n2⌉.

Let N be a simple rank-(n−1) cographic matroid and c be a colouring of E(N) with n colours, where each colour class has size at least 2. Then N contains a rainbow circuit of size at most ⌈n2⌉.

For a graph G, we let M(G) and M∗(G) denote the graphic and cographic matroids of G, respectively. Let G be a connected graph such that N=M∗(G). By deleting elements from N, we may assume that each colour class has size exactly 2. Therefore, |E(G)|=2n. Since N has rank n−1, M(G) has rank n+1. Therefore, |V(G)|=n+2. Since N is simple, G has minimum degree at least 3. For a vertex v∈V(G), let δG(v) be the set of edges of G incident to v. Since c only uses n colours, there are at least two distinct vertices x and y of G such that δG(x) and δG(y) are both rainbow. If degG(x)≤⌈n2⌉ or degG(y)≤⌈n2⌉, then N contains a rainbow circuit of size at most ⌈n2⌉. Thus, we may assume that degG(x),degG(y)≥⌈n2⌉+1. It follows that ∑v∈V(G)∖{x,y}degG(v)≤3n−1. Therefore, some vertex z∈V(G)∖{x,y} has degree at most 2, which contradicts that N is simple. ∎

We finish this section by giving an infinite family of binary matroids for which Conjecture 9 fails.

For each even integer n≥6, there exists a simple rank-(n−1) binary matroid on 2n elements, and a colouring of E(M) where each colour class has size 2, such that M does not contain a rainbow circuit of size at most n2.

Let n≥6 be even. Instead of specifying M via 2nvectors in Fn−12, we specify M via 2n subsets of [n−1], where binary vector addition is replaced by symmetric difference of sets. We represent M by the following 2n sets

Let C be a subset of these 2n sets containing at most one set from each pair and such that ΔC=∅. Here, ΔC denotes the symmetric difference of all the sets in C. We will prove that |C|>n2.

Note that in proving Theorem 8, we only use one fixed transversal. By considering multiple transversals, we suspect that the bound in Theorem 8 can be improved.

Recall that our proof of Aharoni’s conjecture for r=2 uses Theorem 2 as a blackbox. It would be interesting to find a proof of Theorem 5 that avoids using Theorem 2.

Let M be a simple rank-(n−1) regular matroid and c be a colouring of E(M) with n colours, where each colour class has size at least 2. Then M contains a rainbow circuit of size at most ⌈n2⌉.

We would like to thank Ron Aharoni for bringing Conjecture 3 to our attention. We also thank Tillmann Miltzow for help in making Figure 1.