For an affine variety X defined over a finite prime field F_p and some integer h, we consider the discrete h-neighborhood of the set of F_p-rational points, consisting of those points over F_p whose distance from X is not more than h, for a natural notion of "distance". There is a natural upper bound on its size. We address the question whether the neighborhood's size is close to its upper bound. The central notion for understanding this question turns out to be the shift of a variety, which is the translation by a nonzero constant vector of the coordinates. If no absolutely irreducible component with maximal dimension of X is a shift of another component, then the answer to the question is "yes". For the opposite case, we exhibit examples where the answer is "no". When X is absolutely irreducible, the condition on shifts turns out to be necessary and sufficient. Computationally, testing the condition is coNP-complete under randomized reductions, already for simple cases. 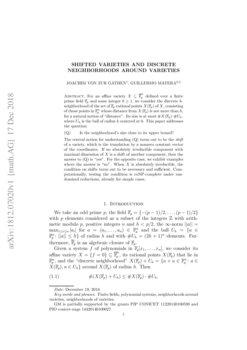 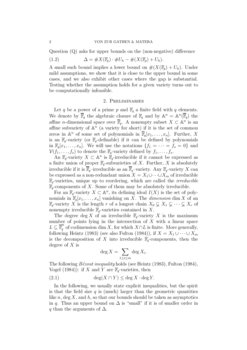 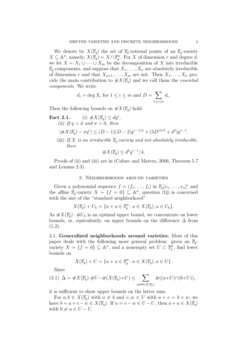 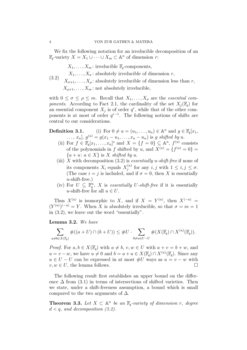 We take an odd prime

Question (Q) asks for upper bounds on the (non-negative) difference

A small such bound implies a lower bound on #(X(Fp)+Uh). Under mild assumptions, we show that it is close to the upper bound in some cases, and we also exhibit other cases where the gap is substantial. Testing whether the assumption holds for a given variety turns out to be computationally infeasible.

Let q be a power of a prime p and Fq a finite field with q elements. We denote by ¯¯¯Fq the algebraic closure of Fq and by An=An(¯¯¯Fq) the affine n-dimensional space over ¯¯¯Fq. A nonempty subset X⊂An is an affine subvariety of An (a variety for short) if it is the set of common zeros in An of some set of polynomials in ¯¯¯Fq[x1,…,xn]. Further, X is an Fq-variety (or Fq-definable) if it can be defined by polynomials in Fq[x1,…,xn]. We will use the notations {f1=⋯=fs=0} and V(f1,…,fs) to denote the Fq-variety defined by f1,…,fs.

For an Fq-variety X⊂An, its defining ideal I(X) is the set of polynomials in Fq[x1,…,xn] vanishing on X. The dimension dimX of an Fq-variety X is the length r of a longest chain X0X1⋯Xr of nonempty irreducible Fq-varieties contained in X.

The degree degX of an irreducible Fq-variety X is the maximum number of points lying in the intersection of X with a linear space L⊆¯¯¯Fnq of codimension dimX, for which X∩L is finite. More generally, following Heintz83 (see also Fulton84), if X=X1∪⋯∪Xm is the decomposition of X into irreducible Fq-components, then the degree of X is

The following Bézout inequality holds (see Heintz83, Fulton84, Vogel84): if X and Y are Fq-varieties, then

In the following, we usually state explicit inequalities, but the spirit is that the field size q is (much) larger than the geometric quantities like n, degX, and h, so that our bounds should be taken as asymptotics in q. Thus an upper bound on Δ is “small” if it is of smaller order in q than the arguments of Δ.

We denote by X(Fq) the set of Fq-rational points of an Fq-variety X⊆An, namely, X(Fq)=X∩Fnq. For X of dimension r and degree d, we let X=X1∪⋯∪Xm be the decomposition of X into irreducible Fq-components, and suppose that X1,…,Xσ are absolutely irreducible of dimension r and that Xσ+1,…,Xm are not. Then X1,…,Xσ provide the main contribution to #X(Fq) and we call them the essential components. We write

Then the following bounds on #X(Fq) hold.

Given a polynomial sequence f=(f1,…,fs) in Fp[x1,…,xn]s and the affine Fp-variety X={f=0}⊆An, question (Q) is concerned with the size of the “standard neighborhood”

As #X(Fp)⋅#Uh is an optimal upper bound, we concentrate on lower bounds, or, equivalently, on upper bounds on the difference Δ from (1.2).

Most of this paper deals with the following more general problem: given an Fq-variety X={f=0}⊆An, and a nonempty set U⊂Fnq, find lower bounds on

it is sufficient to show upper bounds on the latter sum.

We fix the following notation for an irreducible decomposition of an Fq-variety X=X1∪⋯∪Xm⊂An of dimension r:

The following result first establishes an upper bound on the difference Δ from (3.1) in terms of intersections of shifted varieties. Then we state, under a shift-freeness assumption, a bound which is small compared to the two arguments of Δ.

For (ii), we first have 2#Xi(Fq)≤didqr−1 for σ<i≤m by Fact 2.1. It remains to consider 1≤i,j≤σ. By hypothesis Xi and X(u)j are distinct absolutely irreducible varieties and their intersection has dimension at most r−1 and degree at most didj by the Bézout inequality (2.1). By Fact 2.1 (i) we have for any 0≠u∈U−U that

With hypotheses and notations as in Theorem 3.3, assume further that σ=0. Then

When X is not shift-free, then Δ may be large, as in the following example.

Generalizing Example 3.5, we consider a variety Y⊂An whose defining polynomials are independent of the variables xn−m+1, …,xn, for some m with 1≤m<n. We may also consider them as elements of Fq[x1,…,xn−m], they define a variety Y′⊆An−m, and Y(Fq)=Y′(Fq)×Fmq. We consider the embedding

We will modify this reasoning in Theorem 4.3 to show that under a certain condition, no “small” upper bound on Δ exists. ◊

For m,n∈N and s<min{m,n}, we consider the “determinantal” Fq-variety Ms of matrices in Am×n of rank at most s. It is well-known that Ms is absolutely irreducible with

see, e.g., (BrVe88, Proposition 1.1) for the first assertion and (Harris92, Example 19.10) for the second one. A simple calculation reveals that those factors decrease monotonically with growing i, so that the term for i=0 dominates and d≤(ms)n−s.

In view of Theorem 3.3, we check that Ms is not shift-invariant. Let u∈Fm×nq∖{0} and consider M(u)s

. As the zero matrix

be an invertible matrix such that the last

We may thus assume that h is monic original. Then gℓ=fn. We might further normalize f into the monic original f′=f−1n(f−f0), so that in f′=g′∘h′ all three polynomials are monic original, with the appropriate g′, but do not use this here.

All such polynomials f, g, and h are parametrized by their coefficients in An+1, Aℓ+1, and Am−1, respectively. The Zariski closure of the image of the composition map γ:Aℓ+m→An+1 with (g,h)↦g∘h is the set of decomposable polynomials. This is an absolutely irreducible closed affine subvariety Cn,ℓ of An+1, of dimension ℓ+m and with degree d≤ℓℓ+m−2; see gatmat18.

In the remainder of this example, we assume that F is a finite field Fq of characteristic greater than n and that q is sufficiently large (compared to n).

We want to show that Cn,ℓ is Fnq-shift-free. It is sufficient to exhibit for every nonzero u∈An+1 some f∈Cn,ℓ so that u+f∉Cn,ℓ. Addition here is the standard coefficient-wise addition of polynomials.

By the chain rule, the Hasse derivative

Since the set of all f∈Fq[x]≤n as above is Zariski dense in Cn,ℓ and each Df has a factor in Fq[x] of degree m−1, we conclude that the derivatives Df of all f∈Cn,ℓ satisfy this closed condition.

We consider a nonzero u∈Fn+1q, supposing first that degu=n and Du(0)≠0. Any f=∑0≤i≤ℓλixim with λ0,…,λℓ∈Fq belongs to Cn,ℓ and it suffices to prove that there exists such an f with u+f∉Cn,ℓ. When λ0,…,λℓ vary over Fq, the set of polynomials

constitutes a linear family with prescribed coefficients in the sense of, e.g., (MuPa13, §3.5). Arguing by contradiction, assume that u+f∈Cn,ℓ for any f as above. Denote by N={0,…,n−1}∖{m−1,2m−1,…,ℓm−1} the set of exponents corresponding to the monomials having a prescribed value. Then gcd(N)=1, and (Cohen72, Theorem 1) shows that for sufficiently large q, there exists a polynomial f so that D(u+f)∈F is irreducible in Fq[x]. According to our previous remarks, this contradicts our assumption u+f∈Cn,ℓ.

For the remaining case, where degu<n, we add a fixed term λnxn with λn≠0 and let the remaining terms vary, while if Du(0)=0, we make a similar argument considering the Taylor expansion of Du in powers of x−α and the set of elements f=∑0≤i≤ℓλi(x−α)im with λ0,…,λℓ∈Fq, for a suitable α∈Fq∖{0}.

Thus Cn,ℓ is Fnq-shift-free and the estimate of Theorem 3.3 (ii) applies. ◊

Let p>d, q a power of p, let X⊂An be an Fq-variety of degree d and u∈Fnq∖{0}. Then X is u-shift-invariant if and only if X is a cylinder in the direction of u.

which contradicts the previous inequality. It follows that

so that dim(X∩ℓa)=1. The fact that the variety X∩ℓa of dimension 1 is contained in the absolutely irreducible variety ℓa of dimension 1 shows that X∩ℓa=ℓa, that is, ℓa⊆X. Since this holds for any a∈X, we conclude that X is a cylinder in the direction of u.

The converse assertion is clear. ∎

We can reformulate the condition of shift-invariance as follows.

We assume that X=X(w) with some nonzero w∈Fnq. For ease of presentation, we apply a coordinate permutation C so that (Cw)n≠0, and now assume wn≠0. We define the vector of linear forms

and also denote the induced mapping as

The linear forms in L are linearly independent. Let N be L followed by the projection to the first n−1 coordinates, and Y=N(X). Thus N(w)=0. We claim that L(X)=Y×A1.

which shows the claim. The invertible map in the proposition is L∘C.

Let p be a prime, p>d≥1, U⊆Fnp closed under shifts to zero, and X be an absolutely irreducible Fp-variety of dimension r and degree d which is not (U−U)-shift-free. Furthermore, let

and assume that p≥4α2. Then