In this article we study quadratic forms in n independent standard normal random variables. We show that among nonnegative quadratic forms, a diagonal form with equal coefficients maximizes differential entropy when variance is fixed. We also prove that differential entropy of a weighted sum of i.i.d. exponential random variables with nonnegative weights is maximized, under fixed variance, when the weights are equal. 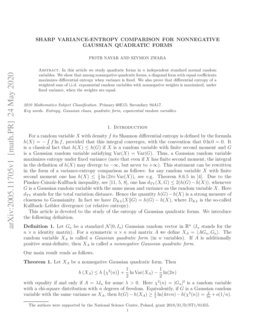 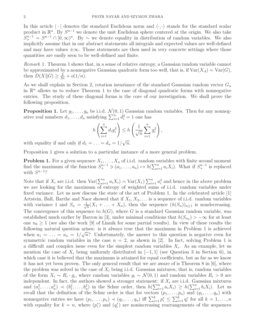 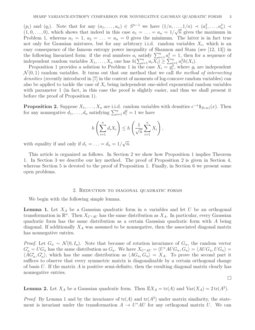 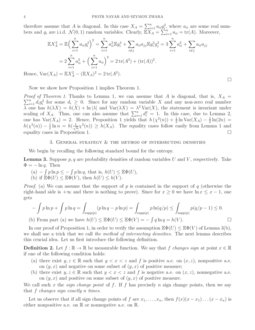 For a random variable X with density f its Shannon differential entropy is defined by the formula h(X)=−∫flnf, provided that this integral converges, with the convention that 0ln0=0. It is a classical fact that h(X)≤h(G) if X

is a random variable with finite second moment and

is the so-called Kullback–Leibler divergence (or relative entropy).

This article is devoted to the study of the entropy of Gaussian quadratic forms. We introduce the following definition.

Our main result reads as follows.

Let XA be a nonnegative Gaussian quadratic form. Then

is a random variable with a chi-square distribution with

In this article |⋅| denotes the standard Euclidean norm and ⟨⋅,⋅⟩ stands for the standard scalar product in Rn. By Sn−1 we denote the unit Euclidean sphere centered at the origin. We also take Sn−1+=Sn−1∩[0,∞)n. By ∼ we denote equality in distribution of random variables. We also implicitly assume that in our abstract statements all integrals and expected values are well-defined and may have values ±∞. Those statements are then used in very concrete settings where those quantities are easily seen to be well-defined and finite.

Theorem 1 shows that, in a sense of relative entropy, a Gaussian random variable cannot be approximated by a nonnegative Gaussian quadratic form too well, that is, if Var(XA)=Var(G), then D(X∥G)≥23n+o(1/n).

As we shall explain in Section 2, rotation invariance of the standard Gaussian random vector Gn in Rn allows us to reduce Theorem 1 to the case of diagonal quadratic forms with nonnegative entries. The study of these diagonal forms is the core of our investigation. We shall prove the following proposition.

Proposition 1 gives a solution to a particular instance of a more general problem.

For a given sequence X1,…,Xn of i.i.d. random variables with finite second moment find the maximum of the function Sn−1+∋(a1,…,an)↦h(∑ni=1aiXi). What if Sn−1+ is replaced with Sn−1?

Note that if Xi are i.i.d. then Var(∑ni=1aiXi)=Var(X1)∑ni=1a2i and hence in the above problem we are looking for the maximum of entropy of weighted sums of i.i.d. random variables under fixed variance. Let us now discuss the state of the art of Problem 1. In the celebrated article [1] Artstein, Ball, Barthe and Naor showed that if X1,X2,… is a sequence of i.i.d. random variables with variance 1 and Sn=1√n(X1+…+Xn), then the sequence (h(Sn))n≥1 is nondecreasing. The convergence of this sequence to h(G), where G is a standard Gaussian random variable, was established much earlier by Barron in [3], under minimal conditions that h(Sn0)>−∞ for at least one n0≥1 (see also the work [9] of Linnik for some partial results). In view of these results the following natural question arises: is it always true that the maximum in Problem 1 is achieved when a1=…=an=1/√n? Unfortunately, the answer to this question is negative even for symmetric random variables in the case n=2, as shown in [2]. In fact, solving Problem 1 is a difficult and complex issue even for the simplest random variables Xi. As an example, let us mention the case of Xi

being uniformly distributed in

[−1,1] (see Question 3 in Section 6), in which case it is believed that the maximum is attained for equal coefficients, but as far as we know it has not yet been proven. The only general result that we are aware of is Theorem 8 in [6], where the problem was solved in the case of Xi being i.i.d. Gaussian mixtures, that is, random variables of the form Xi∼Ri⋅gi, where random variables gi∼N(0,1) and random variables Ri>0 are independent. In fact, the authors showed a stronger statement: if Xi are i.i.d. Gaussian mixtures and (a21,…,a2n)≺(b21,…,b2n) in the Schur order, then h(∑ni=1aiXi)≥h(∑ni=1biXi). Let us recall that the definition of the Schur order is that for vectors (p1,…,pn) and (q1,…,qn) with nonnegative entries we have (p1,…,pn)≺(q1,…,qn) iff ∑ki=1p∗i≤∑ki=1q∗i for all k=1,…,n with equality for k=n, where (p∗i) and (q∗i) are nonincreasing rearrangements of the sequences (pi) and (qi). Note that for any (a1,…,an)∈Sn−1 we have (1/n,…,1/n)≺(a21,…,a2n)≺(1,0,…,0), which shows that indeed in this case a1=…=an=1/√n gives the maximum in Problem 1, whereas a1=1, a2=…=an=0 gives the minimum. The latter is in fact true not only for Gaussian mixtures, but for any arbitrary i.i.d. random variables Xi, which is an easy consequence of the famous entropy power inequality of Shannon and Stam (see [12, 13]) in the following linearized form: if the real numbers ai satisfy ∑ni=1a2i=1, then for a sequence of independent random variables X1,…,Xn one has h(∑ni=1aiXi)≥∑ni=1a2ih(Xi).

Proposition 1 provides a solution to Problem 1 in the case Xi=g2i, where gi are independent N(0,1) random variables. It turns out that our method that we call the method of intersecting densities (recently introduced in [7] in the context of moments of log-concave random variables) can also be applied to tackle the case of Xi being independent one-sided exponential random variables with parameter 1 (in fact, in this case the proof is slightly easier, and thus we shall present it before the proof of Proposition 1).

We begin with the following simple lemma.

Let Gn∼N(0,In). Note that because of rotation invariance of Gn, the random vector G′n=UGn has the same distribution as Gn. We have XU∗AU=⟨U∗AUGn,Gn⟩=⟨AUGn,UGn⟩=⟨AG′n,G′n⟩, which has the same distribution as ⟨AGn,Gn⟩=XA. To prove the second part it suffices to observe that every symmetric matrix is diagonalizable by a certain orthogonal change of basis U. If the matrix A is positive semi-definite, then the resulting diagonal matrix clearly has nonnegative entries.

By Lemma 1 and by the invariance of tr(A) and tr(A2) under matrix similarity, the statement is invariant under the transformation A→U∗AU

for any orthogonal matrix

U. We can therefore assume that A is diagonal. In this case XA=∑ni=1aiig2i, where aii are some real numbers and gi are i.i.d. N(0,1) random variables. Clearly, EXA=∑ni=1aii=tr(A). Moreover,

We begin by recalling the following standard bound for the entropy.

are probability densities of random variables

U and V, respectively. Take Φ=−lnq. Then

(a) We can assume that the support of p is contained in the support of q (otherwise the right-hand side is +∞ and there is nothing to prove). Since for x≥0 we have lnx≤x−1, one gets

In our proof of Proposition 1, in order to verify the assumption EΦ(U)≤EΦ(V) of Lemma 3(b), we shall use a trick that we call the method of intersecting densities. The next lemma describes this crucial idea. Let us first introduce the following definition.

Let f:R→R be measurable function. We say that f changes sign at point x∈R if one of the following condition holds:

Suppose Φ(x)=−τln(x−L)+αx2+βx+γ, where α,β,γ,L are arbitrary real numbers and τ>0. Suppose also that U,V are real random variables with densities fU and fV supported in [L,∞), such that EU=EV, EU2=EV2, and the function fV−fU changes sign exactly three times and is positive a.e. before the first sign change point. Then EΦ(U)<EΦ(V).

Our goal is to prove the inequality ∫Φ(fV−fU)>0. Because of our assumptions, we have ∫xifU(x)dx=∫xifV(x)dx for i=0,1,2. Our desired inequality is therefore equivalent to

where a0,a1,a2 are arbitrary real numbers. A crucial step now is to explore the freedom of the choice of these three numbers. We know that fV−fU changes sign exactly three times at some points x0<x1<x2. We choose a0,a1,a2 so that Φ(xi)=a2x2i+a1xi+a0 for i=0,1,2. This can be done because the matrix (xji)2i,j=0, associated to the system of linear equations that a0,a1,a2 have to satisfy, is a 3×3 Vandermonde matrix.

Let Ψ(x)=Φ(x)−(a2x2+a1x+a0). We now show that the integrand Ψ(fV−fU) in (1) is nonnegative, which will clearly finish the proof (the obtained inequality will be strict because it will also easily follow that this integrand is not an a.e. zero function). We already know that Ψ(x0)=Ψ(x1)=Ψ(x2)=0 and that fV−fU changes sign at x0,x1,x2 and is positive a.e. before the first sign change point x0. Since close to x=L the function Ψ(x) is positive (note that limx→L+Ψ(x)=+∞), it is enough to show that Ψ also changes its sign at x0,x1,x2 and that these are the only sign change points of this function.

To show this we observe that the function Ψ has the form Ψ(x)=−τln(x−L)+ax2+bx+c for some real numbers a,b,c. This function is clearly smooth on (L,∞). It is enough to show that Ψ has only three zeros and none of them is a zero of Ψ′ (then we easily conclude that the zeros correspond to sign changes). Suppose that Ψ has more than three zeros, counting multiplicities (x is a zero of multiplicity k if Ψ(j)(x)=0 for j=0,1,…,k−1, where Ψ(j) is the jth derivative of Ψ, with the convention that Ψ(0)=Ψ). Since Ψ itself has at least three distinct zeros, by Rolle’s theorem we deduce that Ψ′ has at least three distinct zeros. But for x>L we have Ψ′(x)=−τx−L+2ax+b. Thus, the equation Ψ′(x)=0 is equivalent to the quadratic equation (2ax+b)(x−L)=τ, which cannot have more than two solutions (unless Ψ′ vanishes identically, which clearly does not hold in our case as τ>0). We arrived at a contradiction. ∎

Let k,n≥1 be integers and let g:R→R be measurable. Suppose that g changes sign at exactly k points. Assume moreover that ∫Rxjg(x)dx=0 for all j=0,1,…,n−1. Then k≥n.

We prove the lemma by contradiction. Assume that k≤n−1. Let x1<x2<…<xk be the sign change points of g. From our assumption, for every polynomial P of degree at most n−1 one has ∫Pg=0. Let us take P(x)=(x−x1)…(x−xk) and h=Pg. We have ∫h=0. On the other hand, h does not change sign since P changes sign exactly at the same points as g. Since h is not identically zero, we get ∫h≠0, contradiction. ∎

Suppose U,V are real random variables with densities fU and fV, such that EU=EV and EU2=EV2. Then the function fV−fU changes sign at least three times.

where the last inequality results from the Cauchy-Schwarz inequality.

We now consider a random variable S=∑ni=3diYi, where ∑ni=3d2i=1−δ2. Observe that a.s.

again by Cauchy-Schwarz inequality. After substituting S for s in (2) and taking expectation with respect to Y3,…,Yn we get

for 0≤d1<c1,c2<d2 satisfying d21+d22=c21+c22=δ2. The inequality (5) is strict if (2) is strict for every s. The inequality (3) (together with its strict version) follows from (5) by using the standard fact that if x≺y are two vectors with nonnegative coordinates, then x can be obtained from y by applying a finite sequence of operations of the form

The next lemma is borrowed from [7]. We prove it here just for completeness.

We proceed by induction on n. The statement is trivial for n=1. Assume that the assertion is true for n−1 and, without loss of generality, that h(t)=a1tb1+⋯+antbn is not of the form h(t)=atb. The equation h(t)=0 is equivalent to ~h(t)=0 where ~h(t)=a1+a2tb2−b1+⋯+antbn−b1 is non-constant. To prove our assertion by contradiction, suppose that the latter has more than n−1 solutions in (0,∞). Then Rolle’s theorem shows that the function

which is not identically zero, has at least n−1 zeros. This contradicts the inductive hypothesis.